"Their Charge Is Ours Now” 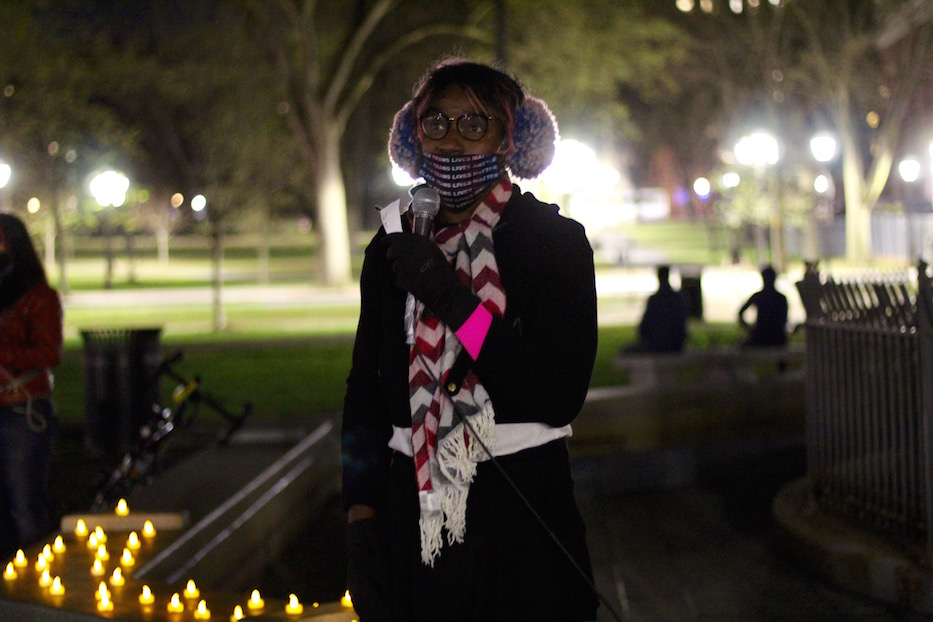 Karleigh Webb on Nov. 20. “I look forward to a day when our humanity is no longer debated," she said. Lucy Gellman Photos.

Friday night, those were just six of the 43 names remembered, mourned, and honored on the New Haven Green during a masked, socially distanced Transgender Day of Remembrance vigil from the New Haven Pride Center and Party for Socialism and Liberation (PSL). Close to 30 gathered for the event, held against the flicker of tea lights and a blue-and-pink trans pride flag by the Green’s flag pole. Dozens more joined through a livestream online. 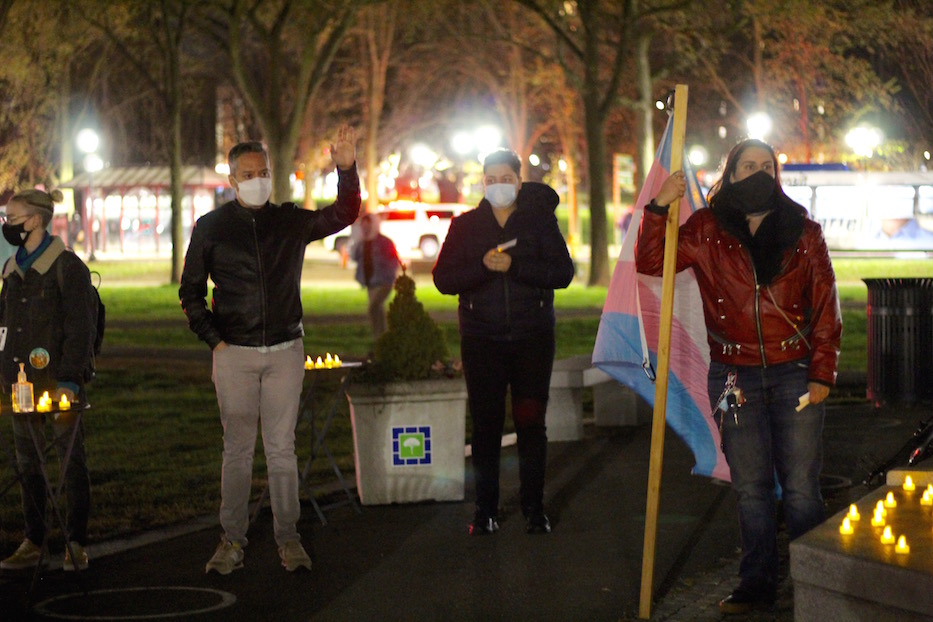 "How many people here, by show of hands, are tired?" Webb asked at one point during the vigil. Within seconds, every hand went up.

Transgender Day of Remembrance (TDOR) began in 1999 to honor Rita Hester, a Black trans woman who was murdered in her Allston apartment in November 1998. Twenty-two years later, 2020 marks one of the deadliest years on record. Between September 2019 and October of this year, Transrespect Vs Transphobia documented 350 murders of trans people, most of them women of color.

Since the beginning of this year, the Human Rights Campaign (HRC) has reported 37 acts of fatal violence against transgender and gender nonconforming people in the United States; Friday's vigil included 41 from this year and 2 from December 2019. Last year at this time, that number was 22. By the end of 2019, it was 25. As both the HRC and speakers at Friday’s event noted, the number is likely much higher due to the number of trans people who are misgendered or unaccounted for at the time of their death.

Due in part to COVID-19, violence is also on the rise behind closed doors: many trans people have been killed within their own homes or spaces they once considered safe. Meanwhile, members of the trans community are also fighting legislative assaults from the Trump administration, including in New Haven and Connecticut. In a sweeping attack this fall, the Department of Housing and Urban Development (HUD) proposed changes to its Equal Access Rule that would target transgender people with housing insecurity. 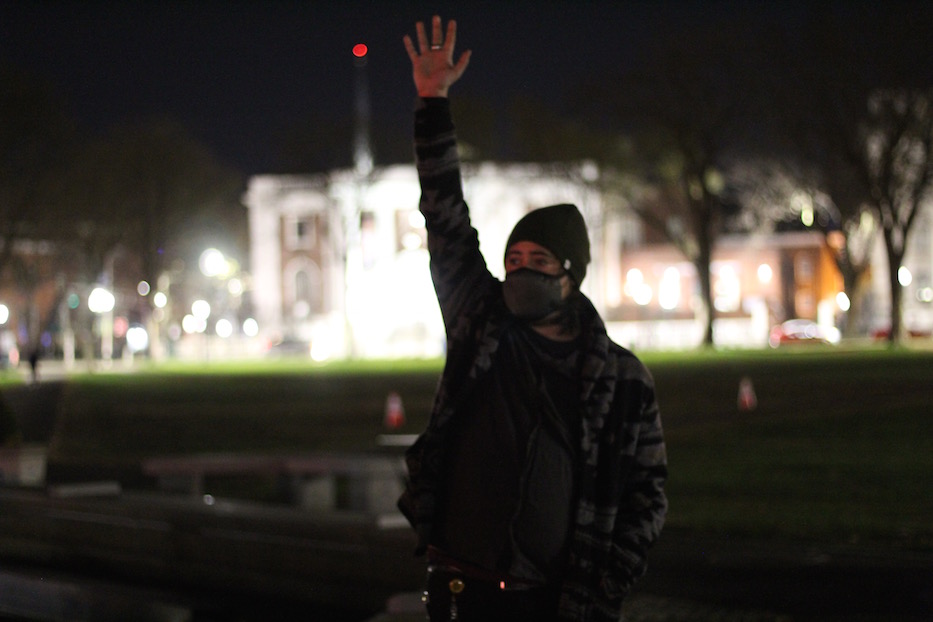 As names rang out into the wet, cold air, participants paused on pronunciations and locations, weaving the story of an epidemic that spans the country and the globe. Spread out on the grass, attendees read not in a line but from feet and sometimes yards apart, in a ballet of grief that spanned the space. Cacophonous cries of “rest in power” went up after each name, remembering the mothers, daughters, sons, brothers, cousins, family members and friends lost far too soon.

During an hour-long program, Olson and other speakers also focused on the intersections of trans rights, immigrant rights, an end to police brutality, and equitable access to jobs and healthcare. Musician Maia Leonardo, marketing and development coordinator at the New Haven Pride Center, pointed to the direct correlation between anti-trans bias in the job market and a reliance on the underground economy, including survival sex work. 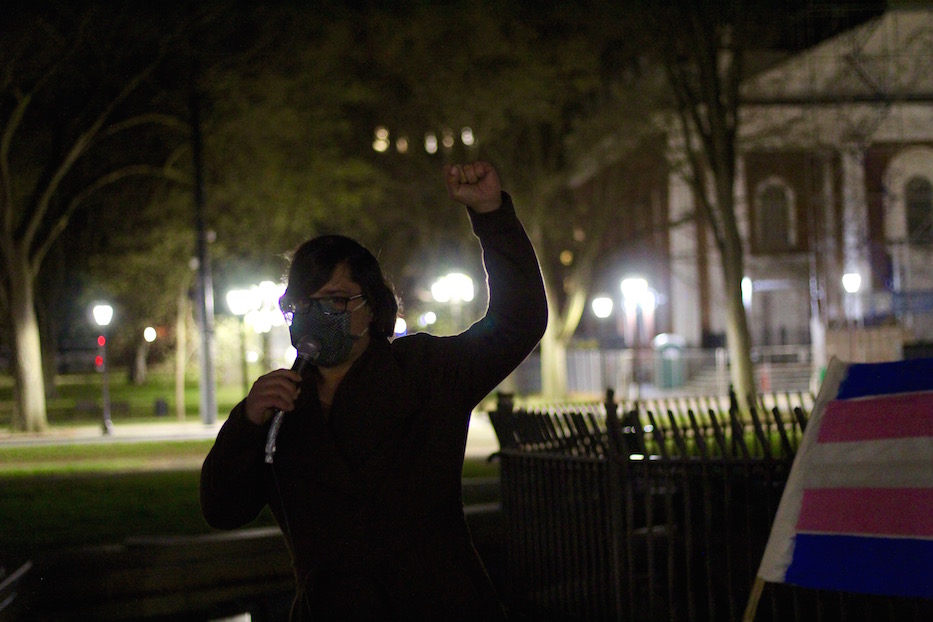 "I think tonight, we need to make a pledge when we’re leaving here that we’re gonna fight."

Chris Garaffa spoke on Friday’s decision among Trump-appointed judges on the 11th Circuit Court of Appeals, which ruled that banning conversion therapy for minors violates First Amendment rights. Garaffa pointed out that judges on that court, like the Supreme Court, are lifetime appointees. They added that each year they come to the event, they spend time thinking about the names that aren’t read, because no one has recorded them.

PSL member and Trans Lifeline Hotline Director IV Staklo urged attendees to honor, support, and celebrate trans people during their lifetimes, rather than remembering them only after their premature deaths. They returned to a phrase that became a rallying cry at last year’s TDOR vigil and rally on the Green: “Give us our roses while we’re still here.” 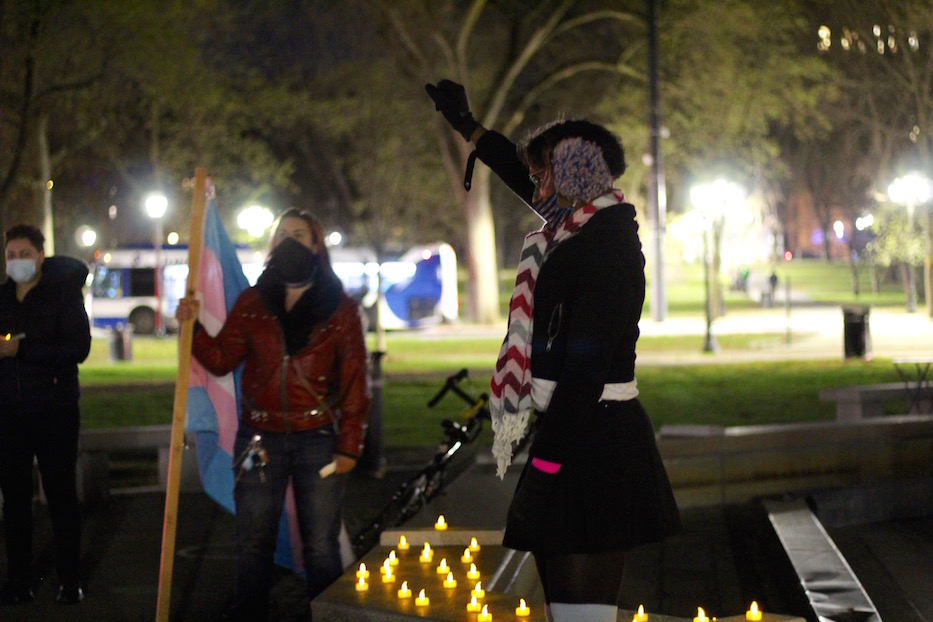 Staklo (in the red jacket) with Webb.

Around the space, attendees shouted out adjectives to add to Staklo’s list. Resilient. Creative. Magical. Human. Here to stay. 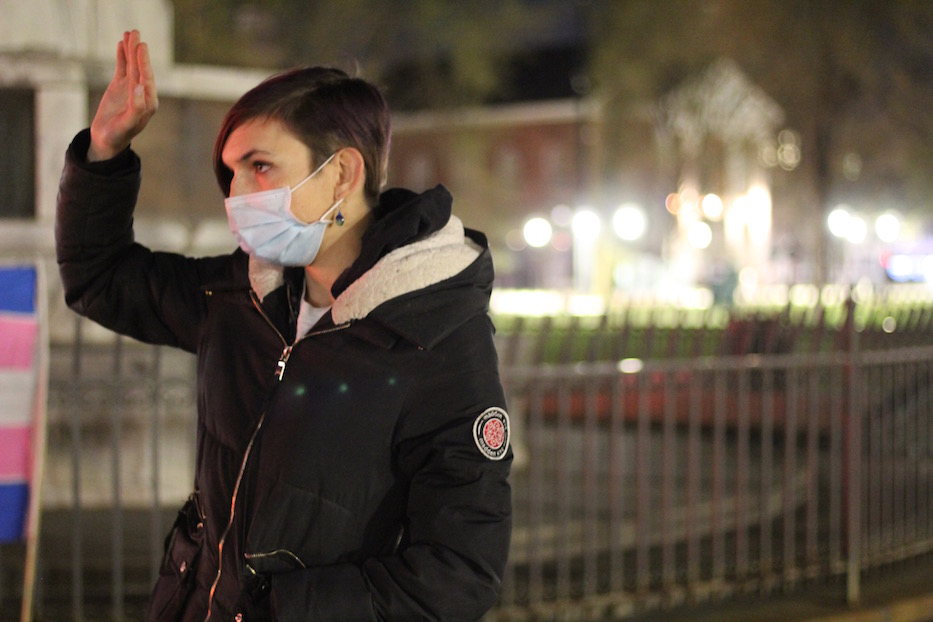 And, Webb noted as she closed with poetry, beautiful. She took the time to honor Monica Roberts and Jerimarie Liesegang, both trans activists who died this fall. Roberts, who passed away in October at the age of 58, was a trans Black woman and journalist who ran the blog TransGriot. Closer to home, Liesegang served as the founder and inaugural director of CT Transadvocacy Coalition. She passed away earlier this month, on Election Day, at the age of 70.

As Webb repeated their names, the crowd bellowed back “Presente!”

“Their charge is now ours,” she said. “They may be gone, but their spirit lives in each of us. Let that spirit carry us forward to do the work that they courageously lived and died for. Their charge is ours now.”

As a journalist for OutSports and operator at Trans Lifeline, Webb also recalled her first Transgender Day of Remembrance in New Haven four years ago, on the steps of the city’s Superior Courthouse across from the Green. She arrived feeling isolated. Then she heard activists speaking about trans pride, and giving their testimonies one by one. 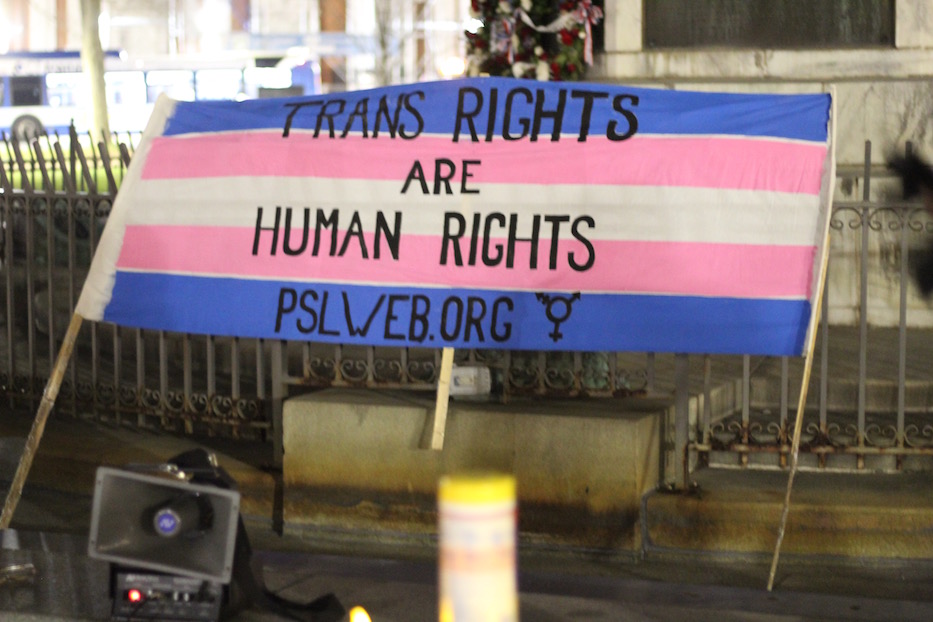 With over 100 attendees, she marched through downtown New Haven, finishing at the New Haven Pride Center on Orange Street. While COVID-19 made a post-vigil gathering impossible, she encouraged attendees to leave with at least one new friend. For Webb, that first friend was Staklo. Their support for each other has changed her life.

“I’m there,” she said. “And because someone embraced me, that led to a chain reaction, and another chain reaction, and I met more and more people. I realized that there was an entire community of trans people and allies with open arms saying come, come on in.”

To view Friday's livestream, click here. If you or someone you know is looking for trans support and community, Trans Lifeline is accessible 24/7. The Trevor Project offers 24/7 confidential support for LGBTQ+ youth in crisis. Other resources include The Trans Women of Color Collective, The Sylvia Rivera Law Project (SRLP), and The National Center for Transgender Equality.