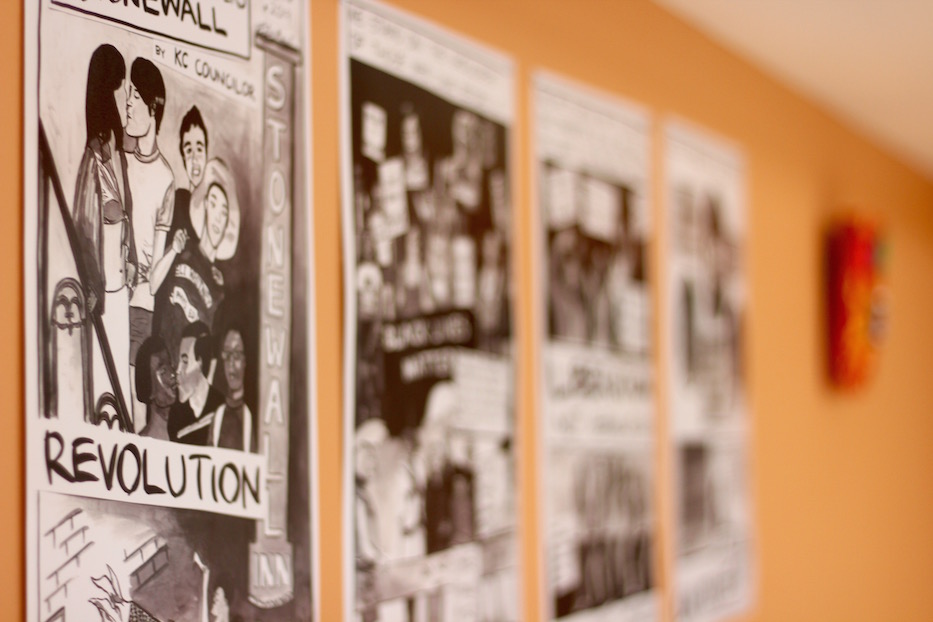 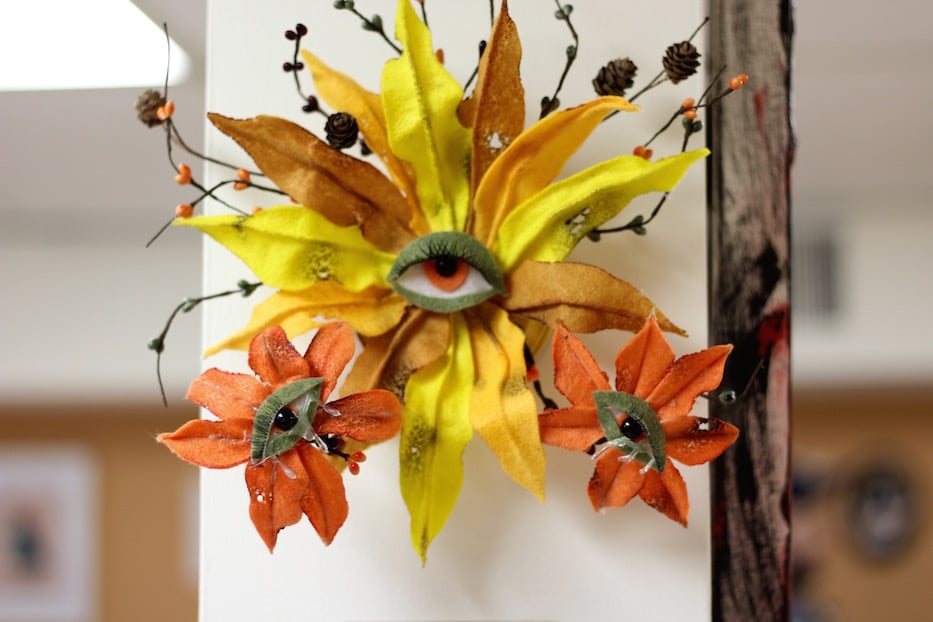 An eye opens in the center of a wild, soft sunflower, unafraid and unblinking. A trans man fights the common cold with positive energy, too worried about how a doctor might react to the fact that he’s taking testosterone. A first rises out of the corner of one’s eye, pulsing with light. Only on closer inspection do the bulbs reveal themselves as bottles of testosterone, strung up and twinkling.

An intimate, often confessional world-building sits at the center of Trans-Cending Art, the latest exhibition at the New Haven Pride Center. The group exhibition, which opens in time for Transgender Awareness Week, runs through the end of this month. Artists include KC Councilor, Tony Ferraiolo, Jules Larson, Reed Miller, Elliott Grinnell, and Finn Lockwood. All of them identify as trans and non-binary, in keeping with November’s theme of transgender awareness.

It marks the first show for the center’s remodeled and repainted Great Gallery, funded by a grant from Health Care Advocates International. The same grant is responsible for a new case manager position that will begin part-time in January.

“This month comes with very mixed feelings for me,” said Patrick Dunn, executive director of the New Haven Pride Center. “In a way, it's a celebration of a portion of the community. But it's through a very sad lens, because we’re remembering people who have lost their lives [for being transgender]. For them, walking out the door is a political act. They don’t want it to be, but it is.”

“It’s somber but it’s also empowering,” he added. “It’s a chance to reconnect with trans groups in the community. Every year, we're able to do things a little bit better, which is awesome.”

The crew behind Trans-Cending Art captures that intense bittersweet, the walls packed with stories that start in this universe, and make the jump into others. One one wall, Larson’s large canvases catch one’s eye and refuse to let go easily, with rivers of bright color that pool like ink and oil. 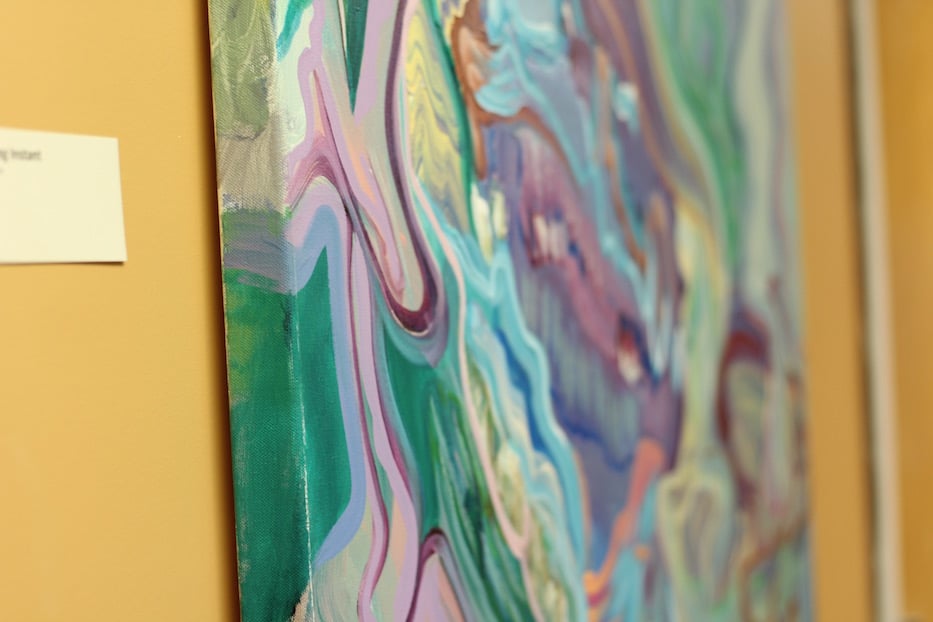 In her Wailing Instant, an algae-green background gives way to pink, purple, yellow and blue shapes, each so fluid and folded in on each other that they looked like mitochondrial DNA in an otherworldly dimension. A purple shape clenches at the center, as if a hard jawline has met a Venus flytrap mid-swallow.

Or maybe the painting is a personal topography, capturing a moment in Larson’s life and translating them into brilliant color. On a nearby wall, two more of the artist’s canvases pop in oranges and pinks, so creamy they nearly blend into the wall.

Other artists have gone in the other direction, telling their own stories and a community’s stories with multimedia self-portraiture, sculpture, and caricature in black and white and color. In two side-by-side felt-and-wood self portraits by Finn Lockwood, the viewer can literally watch the artist in emotional and physical transition, tracing two renditions of the same face completed two years apart.

In the first self portrait, completed in 2017, Lockwood sports a black mop streaked with grey, their eyes framed in round, thin wire glasses. Their cheeks and eyelids are streaked with pink; clotted glue tears run from their eyes. A black collar, impossibly neat, fastens at the neck. There’s something quaint and charming about it at first. But the longer one looks, the more Lockwood seems to be straining against it. So is it tidy, or is it suffocating? 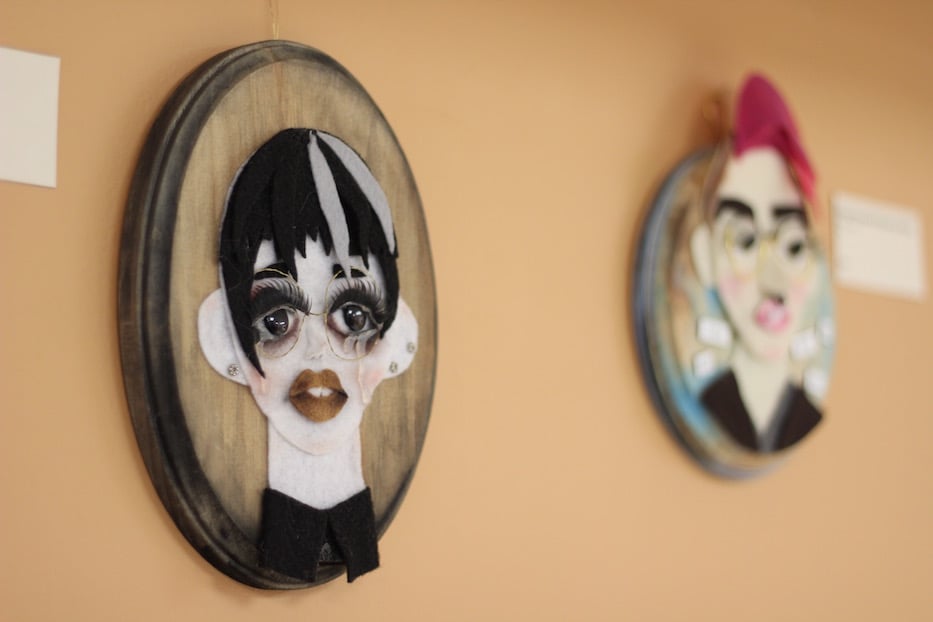 A current self portrait, completed after Lockwood started hormone replacement therapy, seems to offer up the answer. Beneath a shock of pink hair, the artist looks out at the viewer, mouth half-open. Their eyes are tired but engaged, as if the lids have become heavy. A nose ring peeks out from the lower half of the portrait, surprisingly graceful. There are no tears here: Lockwood’s tight collar is replaced with a grey and black sweater that looks cozy, wrapping the artist like a blanket.

But there’s still a suggestion of liminal space, as if they’re still not exempt from sadness. Lockwood is surrounded by the words “bitter/sad” and “he/they/she” on both sides of the portrait, hung like contrarian refrigerator poetry. Where the 2017 portrait sits on a bare wood background, Lockwood 2019 portrait suggests something new, with smears of gold and sky blue among a heavy sadness that’s still lifting.

In KC Councilor’s Standing On The Shoulders Of Stonewall, one is transported back half a century, watching how the legacy of the Stonewall Rebellion—led by a Black trans woman—carries over into today’s popular culture. As Councilor’s story unfolds panel by panel, viewers see activists outside the Stonewall Inn, hurling trash cans out of the frame as flames spring from their lids. The use of political comic imagery fits: it makes the story accessible to viewers who are still learning it, and provides a new lens for those who already know.

The comic keeps going. In one vignette, a rally unfolds, bodies pressed shoulder-to-shoulder, hoisting up handmade signs for gay rights in a world where it doesn’t seem that they are safe. In another, a crowd rallies around a banner that reads “Liberation Not Assimilation,” a slogan that equates queer liberation with an end to not just structural oppression of LGBTQ+ folks, but also an end to capitalism and du jour white supremacy.

“I stand on the shoulders of those who came before us,” read the embedded text, scrawled in neat letters that pack a punch from the page. “Those who were most vulnerable, the fringe, fought on the front lines, and we know that those on the front lines benefit least in any struggle.”

In both this and his other works, Councilor does a sort of world-building where the taboo is made possible, and the possible is made joyous and expansive. In one such panel, the artist has created a universe in which having a kid who identifies as trans is more than a nonissue: it’s celebrated. In the bottom right, a woman with a close-cropped fro leans back on her chair, her hands massaging an enormous belly.

“I am hopeful with this baby—number four—we’ve been doing monthly rituals,” she tells her friend.

It’s a testament to the role of humor as a coping mechanism, maybe—but also a reminder that another world is possible without white supremacy and straight panic. As two women bemoan the difficulty of raising a cisgender boy, viewers may have a well-earned laugh, but they are also reminded of how many kids face a greater risk of homelessness and violence for simply coming out as LGBTQ+. 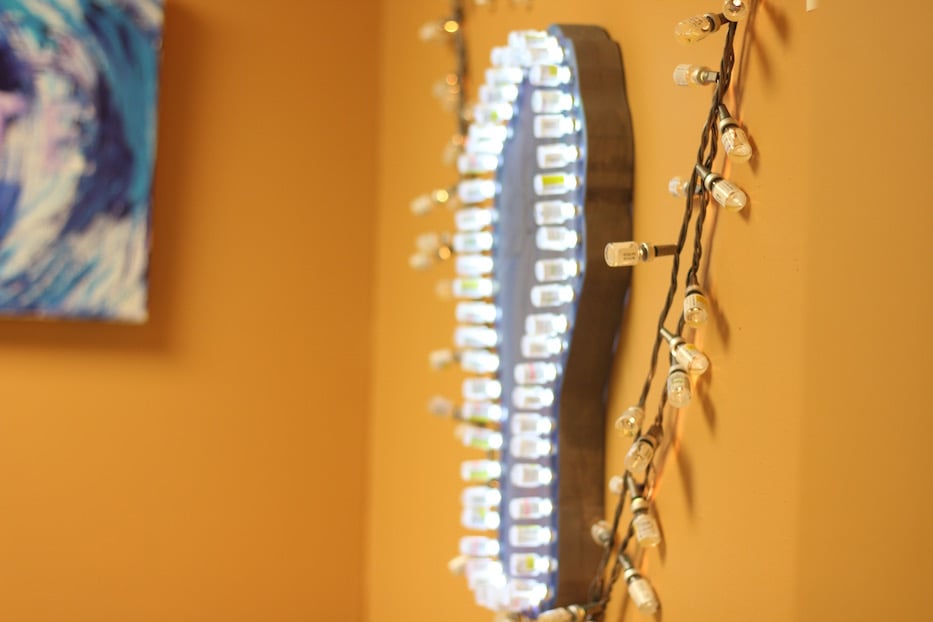 Others still have drawn on their own trans experience as a source of power, layering multimedia installation and light art with biography. In Fight For Our Right To Be Ourselves, artist and activist Reed Miller has fashioned an enlarged outline of his own fist, around which testosterone bottles twinkle like white Christmas lights.

It’s as moving as charming: the viewer is drawn in because they think they are getting a light show, and stay to study the power, resiliency and sheer emotional labor contained in a single raised fist. Tony Ferraiolo’s Sex embraces the same bottle as a symbol of new possibility, with an ebullient spray of color that shoots from the bottle to all sides of the frame.

The exhibition marks a season of unprecedented growth for the center, which has brought on two new program officers of an ultimate three, and welcomes trans advocate and artist Maia Leonardo as marketing and development coordinator this month. Laura Boccadoro, who has been interning with the center for the past several months, will also be joining the center as a part-time administrative coordinator.

In January, the grant from Health Care Advocates International will also allow the center to bring on a full-time case manager for the first time in the organization’s history. The positions, as well as a renovated space, are also supported by a $50,000 grant from CenterLink, a nonprofit hub that supports LGBTQ+ community centers around the country.

To find out more about Transgender Awareness Week events in New Haven, click here. The exhibition runs through Nov. 30.