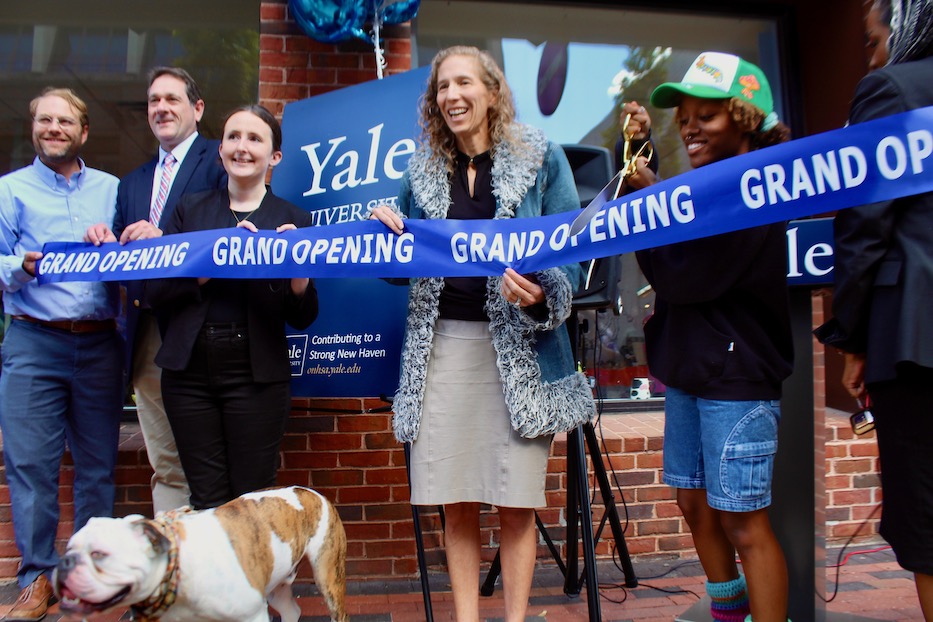 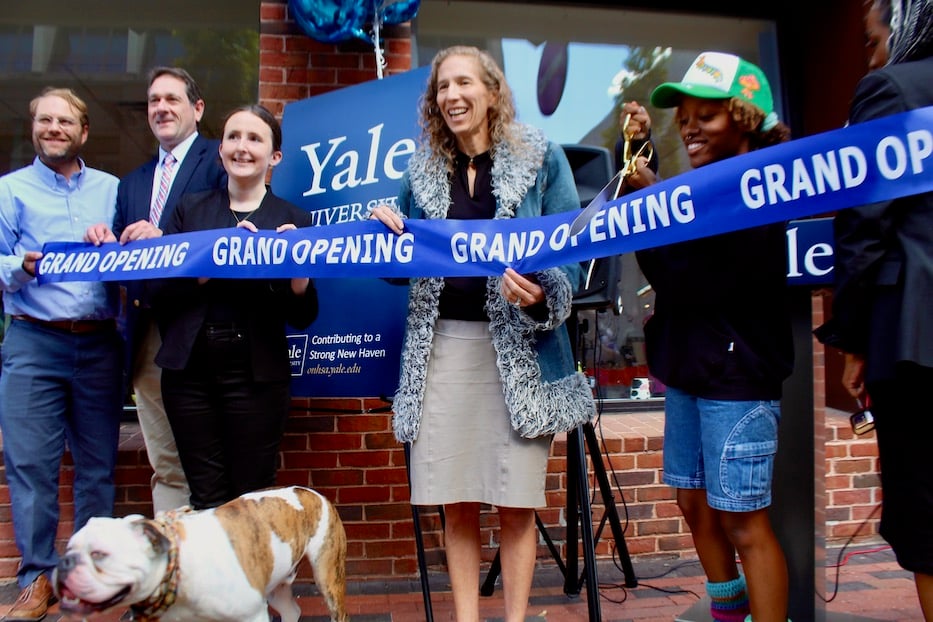 “I've been dreaming about this since I was a kid,” said Eiress Hammond, who runs the brand MINIPNG. Lucy Gellman Photos.

The clothes communed with each other from the sun-kissed racks, each telling the story of their former lives. By the door, a pair of overalls got a second wind with a striped, sleeveless bodice over an adjustable waist. Across the room, a green-and-yellow swirl stretched across a cropped, quilted fall jacket. Wooly, knitted purses waited for new owners by a window. Sweaters peeked out with splashes of thick pink and blue yarn. Around them, humanoid figures on the walls stretched their arms out toward the sky, floating in space.

Welcome to the first-ever MINIPNG storefront, now open at 77 Audubon St. Tuesday through Saturday from noon to 7 p.m. and Sunday from noon to 5 p.m. The brainchild of 23-year-old artist Eiress Hammond, the store marks a brick-and-mortar milestone years in the making. As it lands on Audubon Street, it joins a flourishing slow fashion landscape and proliferation of independent Black-owned businesses across the city.

The building is owned by Yale University Properties, which controls most of the storefronts in the Audubon-Whitney Retail district and so-dubbed “Audubon Arts District.” It marks the first Black-owned, woman-owned business on Audubon Street since stylist Luvena Jones moved her curly hair salon to Grand Avenue several years ago. 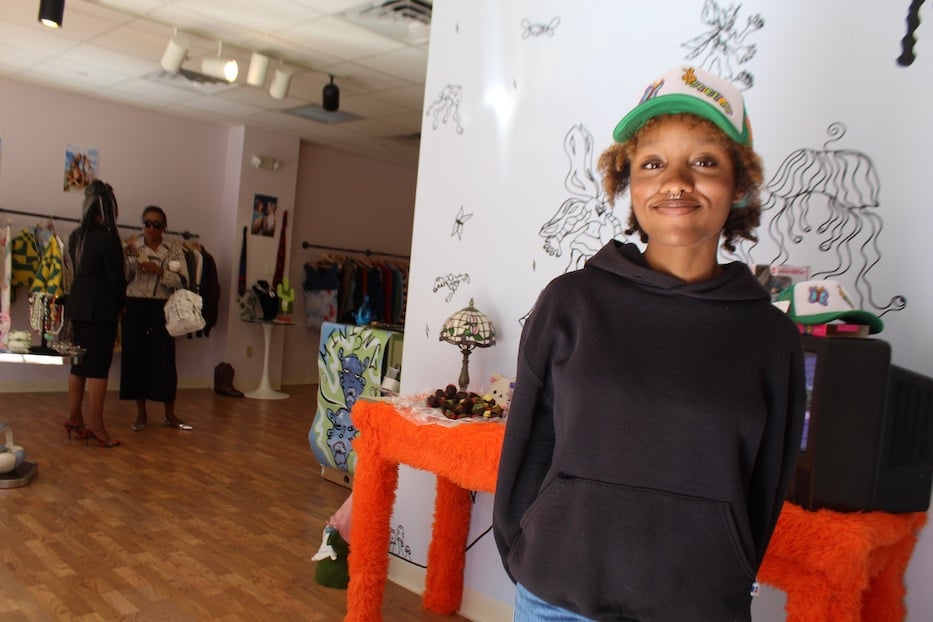 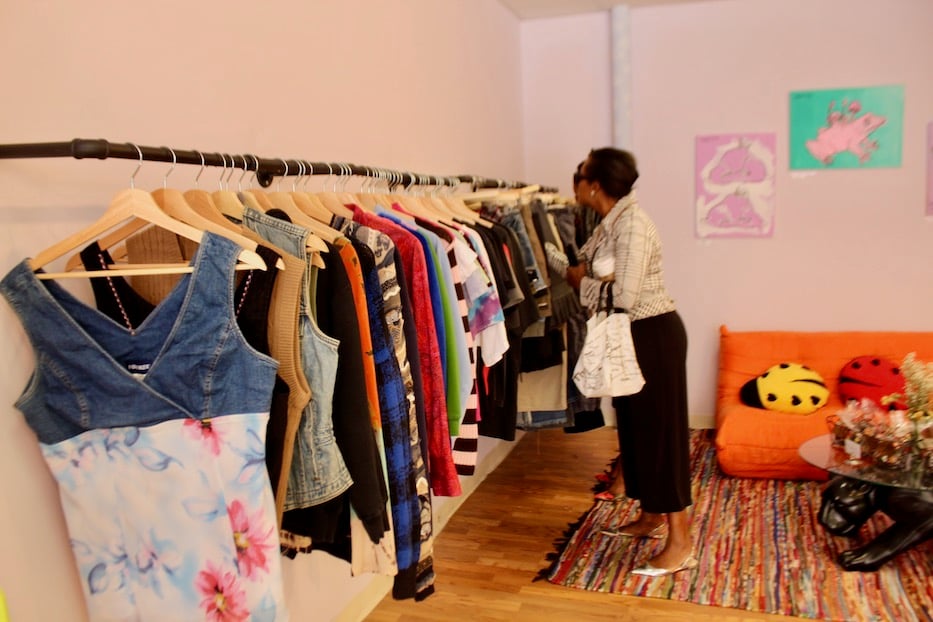 “I've been dreaming about this since I was a kid,” Hammond said at a ribbon cutting Wednesday, standing beside representatives of Yale University Properties, city officials, and Audubon Street neighbors who came out to cheer her on. “I've always been super artistic, and this is something that I've always dreamed of. Doing so, I'm really happy that I get to share it with you guys, and share it here.”

"We are so lucky to welcome you here on Audubon Street,” said Lauren Zucker, associate vice president for New Haven affairs and Yale University Properties, as she sported a MINIPNG jacket with fringe at the neck and cuffs. She added that introducing a Black-owned, woman-owned, grassroots fashion business to the neighborhood “is like one of my favorite sentences to say.”

Hammond, who grew up with her grandparents in Middletown and now lives in East Rock, has been working toward the storefront for years. Even as a kid, she was entrepreneurial: she sold bows and matching shorts to her classmates, then expanded her reach as she learned more about sewing in high school (read more about that in a previous Arts Paper article here). 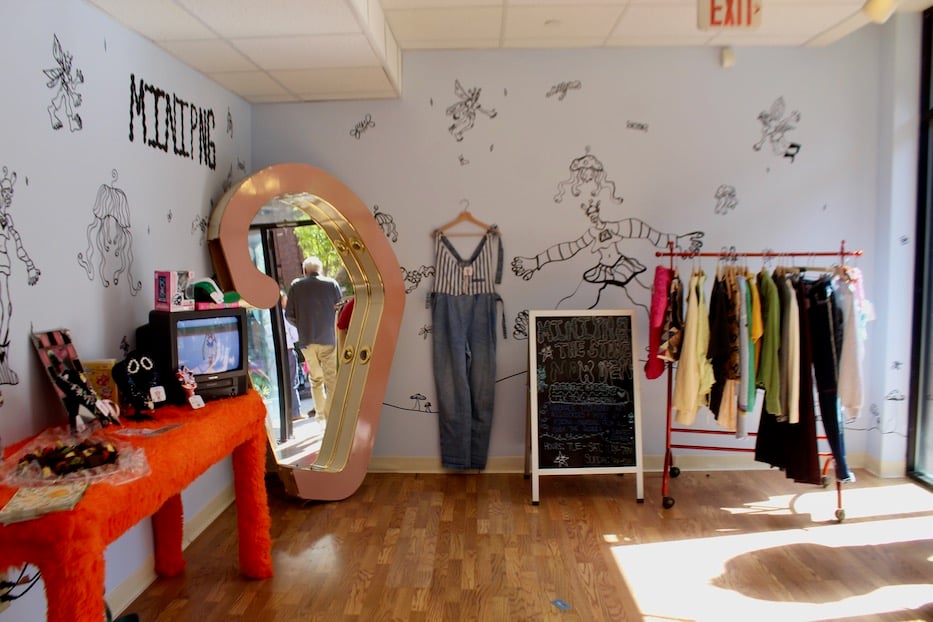 After high school, Hammond grew her design footprint as a student at Wittenberg University, ultimately putting her studies on hold in 2020. It was there that she freehanded her now-recognizable “In The City” tank, an eye-catching design that became part of a copyright dispute two years ago. Her now-viral following comes from years of hustle, and her frequent trips between Connecticut and New York to source and thrift materials, hold pop-ups, and participate in fashion shows.

In that time, she has become a champion of small, independent artists, taking fast fashion brands like AliExpress, Shein, and Zara to task for stealing artists’ work including her own.

Wednesday, her grandmother Christine Sherwood radiated light as she watched Hammond cut a thick blue ribbon, receive praise from city officials, and then glide into a store of her own. Outside, Handsome Dan enthusiastically slobbered in the autumn sunlight.

Artistry runs in the family: Sherwood’s father was an artist, and she is a vocalist when she’s not working in waste management and recycling. As she entered the store, she delighted in the racks of salvaged, reborn cotton, denim and wool, all made new in her granddaughter’s careful hands. She paused to admire the hangers, wrapped in delicate, bright yarn. 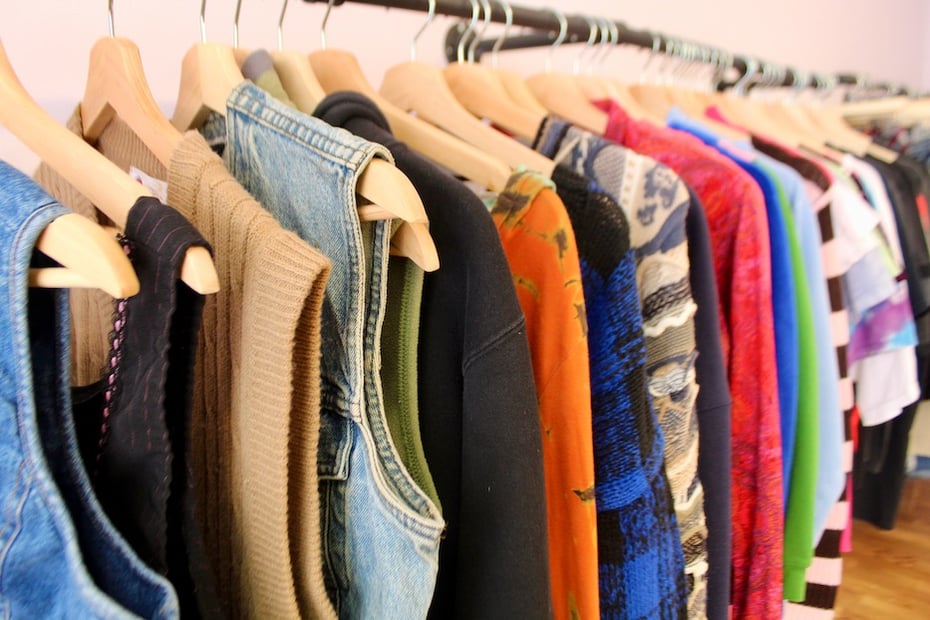 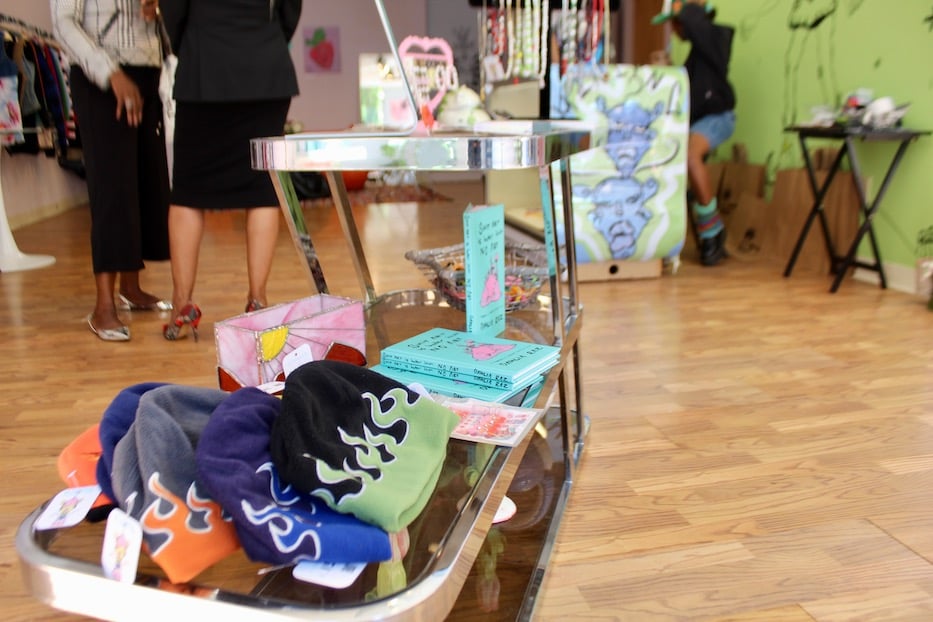 For her, it also marked a sort of full-circle moment. Born and raised in New Haven’s Dixwell neighborhood, Sherwood spent years of her youth on Audubon Street, attending the Educational Center for the Arts (ECA). Back then, she said motioning to the street, “this was our sanctuary.” Outside of school, Audubon Street and downtown bustled with independent businesses. The shop “brings me back to the days when I was a kid,” she said.

There’s one big difference, she added: Sherwood believes that young people are freer to express themselves through their clothing now than she was as a teenager. She sees her granddaughter taking that trend and running with it in explosively creative ways.

“This is an outlet for her that allows her to be the best person she can be,” she said. “I’m just still amazed. I think of her humility as well as her artistry … it also gives back to the community.”

Inside the store, customers gravitated toward racks of wool sweaters, quilted jackets, Frankensteined, color-block sweaters and wide-legged pants with hand-painted designs. Delicate stitching wove across a denim vest; shiny pink ribbon emerged from the knitted collar of another. The upcycled, secondhand nature of the clothes is baked into Hammond’s brand: she is part of an increasingly vocal movement against fast fashion, and the tremendous environmental and public health hazard that it creates across the globe. Her clothes, by their very nature, breathe new life into garments that would otherwise be headed for the landfill.

She isn’t doing it alone, she said. In the store, she has help from her partner Elijah Blanchard, who runs the brand Thrifted Hugs and also has merchandise in the store. She plans to hold pop-ups in the space, celebrating other brands and multimedia artists that she knows. When she isn’t in New Haven, she said, she’s usually running pop-ups and collecting secondhand clothes and fabrics in New York City or elsewhere in Connecticut. 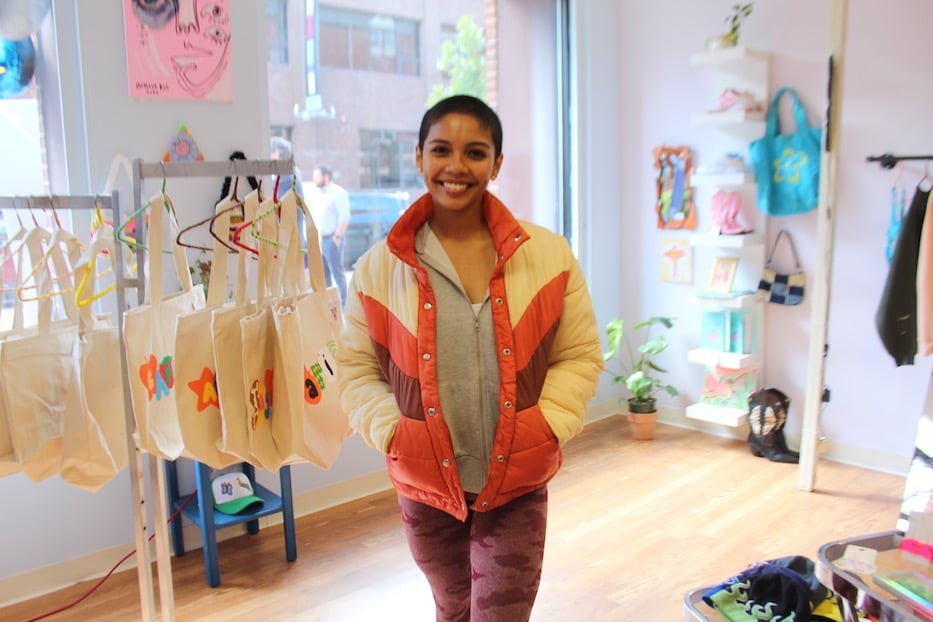 Modeling a quilted brown, orange, and white coat, Mazela Dolotina-Lopez said that she was excited to visit the long-awaited storefront, and would almost certainly be back. A child psychiatric nurse in her professional life, Dolotina-Lopez was originally a classmate of Hammond’s in high school, and has kept tabs on the MINIPNG brand in the years since. In her work, she said, she often sees kids who have an artistic bent, but don’t always feel empowered to create freely.

“I love it,” she said. “It definitely brings me optimism, especially for the population I work with. It’s so great—I think of how my patients can see this and be like, ‘I can do this, too.’”

During the ribbon cutting, city leadership and economic development officials had also lauded the store. Joking that his could-you-be-more-normie pressed blue button-down had definitely not come from the shop, Mayor Justin Elicker noted how calm Hammond seemed in the midst of opening a business.

That is itself a feat, he said: small business owners are constantly “putting out fires” as they become their own HR, finance, and marketing departments. And yet there she was, rocking a baseball cap and leg warmers, “cool as a cucumber.” 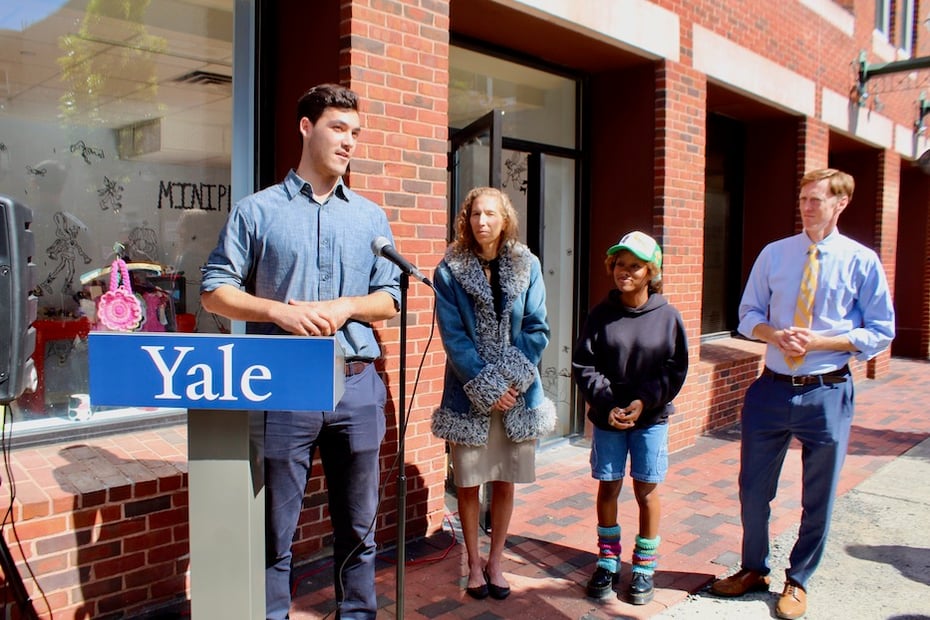 Moments before customers flooded her store, East Rock/Downtown Alder Eli Sabin also called it exciting for both the city and for Ward Seven. Both Hammond's business and her Pearl Street apartment fall within his ward, and he thanked her for choosing New Haven as the place to grow her business. He called it "a great example" of support and collaboration within the city's expanding, ever-morphing business community.

"Thank you to everybody who is putting their back behind, their shoulder behind making sure our business community is thriving here," he said. "We've got a thriving arts scene in New Haven, especially in this corridor. So watch out Brooklyn, we're getting pretty cool here in downtown New Haven."

Watch more from the ribbon cutting above.