Welcome To The W.E.B.

Ten bodies leaned forward, facing the front of the room. Ten pairs of hands and lycra-clad legs, ready to move. Ten pairs of sneakered feet, shifting from ball to heel, heel back to ball. Twenty eyes swiveled onto trainer Adrion Russell as he ministered to the group.

“These are called the mornings because you usually feel it in the mornings,” he said, bending down.

Russell now sets the scene each Wednesday and Saturday at The W.E.B. (Weight Education Body) Project, a 26-week health and fitness program by and for residents of the Whalley-Edgewood-Beaver Hills neighborhood. Classes, which run $2.50 per person and end in June, are taught twice a week in the community room at the Whalley Avenue police substation, located beside Minore’s Meat Market at 332 Whalley Ave.

The project was designed by W.E.B. Management Team Chair Nadine Horton and a handful of volunteers as an outgrowth of the Goffe Street Armory’s community garden, a New Haven Land Trust initiative that has drawn a tight-knit group of community members for weekly work days. 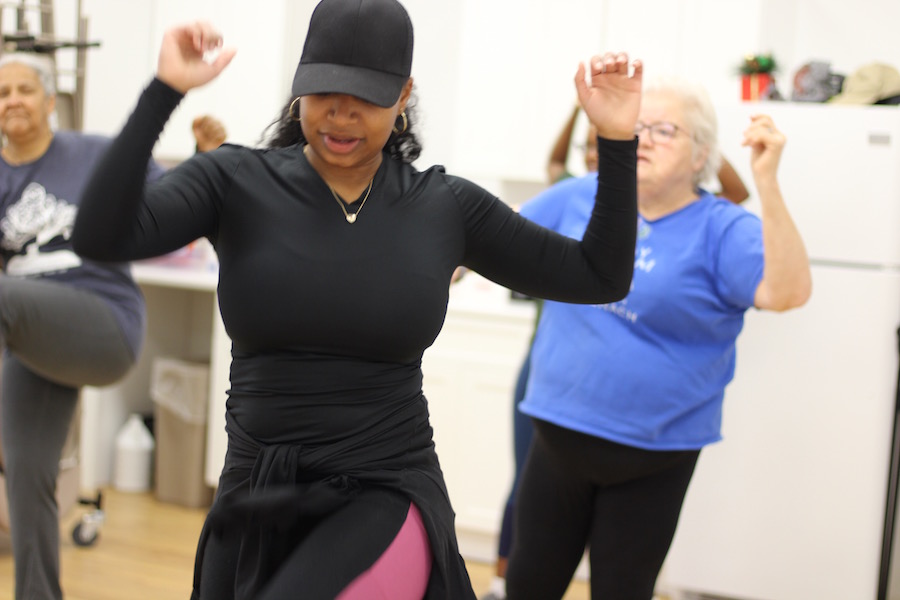 Earlier this year, Horton said, several members began talking about how much they wished that the garden’s work days extended into the winter months. While they weren’t keen on being outside in the cold weather, they wanted something that could still bring people together and leave everyone feeling like they’d had a good workout.

At the time, Horton knew that the W.E.B. Community Management Team had money left over from the $10,000 it had received in Neighborhood Public Improvement (NPIP) funding from the city’s anti-blight Liveable City Initiative (LCI), a large portion of which went to the garden itself. Then one of the garden’s members mentioned that she knew a personal trainer who had grown up in the neighborhood. So Horton pitched it to the Community Management Team, receiving $3,444 for a sort of beta year. After this year, she said that the team will be applying for grant funding to keep the project going.

That number is lower than what most personal trainers charge, for which Horton said she considers the group very lucky. Russell, a 33-year-old who runs Action Fitness and lives just across the street on Carmel Avenue, offered to do the classes at a subsidized rate as a way of giving back to the community that raised him.

At W.E.B.’s second session last Saturday, Horton said the project’s main mission is to reduce obesity and high blood pressure and teach healthy nutrition in the neighborhood—all while fostering a sense of community and support. After each class, attendees have the option to record their weight and body fat percentage, tracking their progress from winter to spring, and spring to summer. In addition, she said that the project keeps a social aspect of the garden alive in some of the year’s coldest, dreariest months. 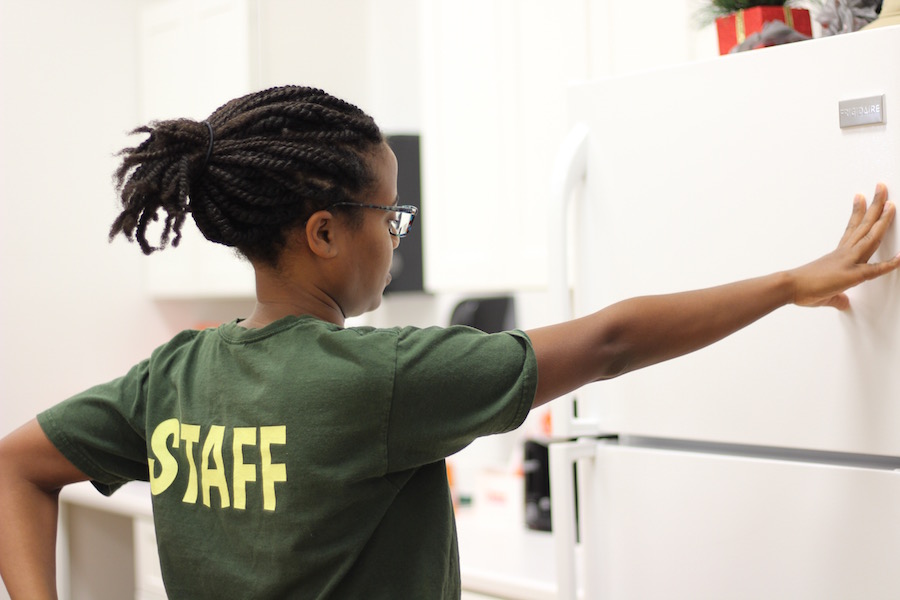 The program comes right on time for the neighborhood, where classes unfold across from what some have dubbed a “fast food row” on Whalley Avenue. In 2016, DataHaven found that 13 percent of people living in New Haven’s would-be “Promise Zone” neighborhoods—the lowest-income areas of the city, of which Whalley and a section of Beaver Hills are part—struggled with diabetes, a contrast to just six percent in higher-income neighborhoods. A similar DataHaven community wellbeing survey repeated last year showed the same trend, indicating a public health crisis in some of the city’s poorest neighborhoods.

Now, Horton and Russell are hoping the sessions are part of the solution. Last Saturday morning, Russell watched as class members spread out across the room, a sea of bright lycra, cotton and fleece against its white tile and bright lighting. He nodded as Beyoncé’s “Get Me Bodied” pumped from a speaker over the room. Then he started the routine, an hour-long mix of stretching, core exercises, and cardio intended to provide a full-body workout.

Not even five minutes in, and participants had started to break a sweat as vintage Beyoncé switched into more recent tracks from her 2011 album Four. Russell paused the group between 30 seconds of jumping jacks and toe touches for a hydration break.

After the session, Russell said the workouts (of which Saturday’s kicked this reporter’s butt) are intended to be rigorous, without making fitness seem intimidating. Dressed in an oxblood-colored hoodie and matching shoes and baseball cap, he presents as a mix of hard-edged (“no crying!” he joked at two points during Saturday’s workout) and affable, always willing to offer modified poses for attendees who may need an extra support as they squat, bend, or do leg rotations until their hips can take no more. The whole hour is set to music, a bouncy remix of "Love On Top" coming in just in time for Saturday's cool down. 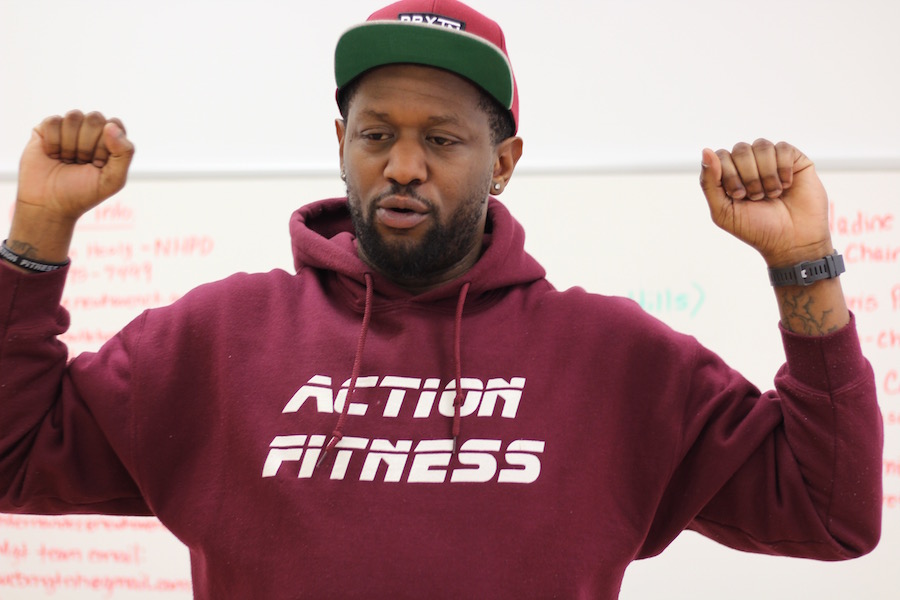 For Russell, teaching the class is personal. Born and raised just off Whalley Avenue, he first became interested in personal fitness six years ago, after realizing that he wanted to be in better shape. Initially, he started going to Bowen Field by Hillhouse High School, where he would run and stretch for at least an hour a day. A few months into the routine, he started inviting friends to come with him, the groups growing in size each week.

Back then, he was calling it “something like ‘Come Work Out With Adrion,’” and letting friends and friends of friends tag along for free. But the end of a year, he found himself leading as many as two sessions a day. He enrolled at the nearby Branford Hall Career Institute, studying exercise science and personal fitness. Six years later, Action Fitness has bloomed into a one-on-one training program, with Russell hoping to help New Haveners make the same healthy choices he did.

“I love what I do,” he said. “It’s my calling, my passion. And this [class] … it’s about giving back, because a lot of people gave to me when I was growing up.”

As the project gets underway, participants are coming into classes with their own individual goals—and sometimes their own free weights too. After lifting purple, eight-pound weights for a series of arm lifts, chest presses, and shoulder rotations, Horton said that she wants to be able to more comfortably bear her biceps and shoulders by the summer—so much so that she already has a specific shirt in mind. In July, she and her husband are visiting their daughter in Los Angeles, where she is working as a production assistant.

She said she is expecting it to be “very ridiculously hot,” the kind of weather that calls for tank tops and shorts. She tried gyms, and realized they weren’t for her—there was too much prep and schlepping involved, and then everyone seemed like they were watching once she was actually working out. Paired with home exercises, the biweekly classes are more her speed.

That’s also true for Damonne Jones, who was attracted to the classes because she’s “always battling with my weight,” and saw the W.E.B. Project as a way to get it under control in a supportive environment. In previous years, Jones attended the gym at the Jewish Community Center in Woodbridge, but found that it was a trek from her nearby home. This year, she is planning in pairing the twice-weekly classes with a similar workout regimen she can do at home.

Inez Myers, who lives near the substation on Dixwell Avenue and helped spearhead the initiative while working in the Armory garden, said she sees it as a way to keep several health problems at bay. While she attends HealthTrax Fitness Center in nearby North Haven three times a week, the W.E.B. Project’s workouts round out her weekly fitness routine.

“You gotta keep your body moving,” she said. “If you don’t move it, you’ll lose it.”

Classes for the W.E.B. Project run Wednesday evenings from 6 to 7 p.m. and Saturdays from 10 to 11:30 a.m. in the community room at the Whalley Avenue police substation, 332 Whalley Ave. Classes are $2.50 per person. Next Saturday's session will run from 9-10 a.m. because of another event in the room.