"Windowed Worlds" Press On Through A Pandemic 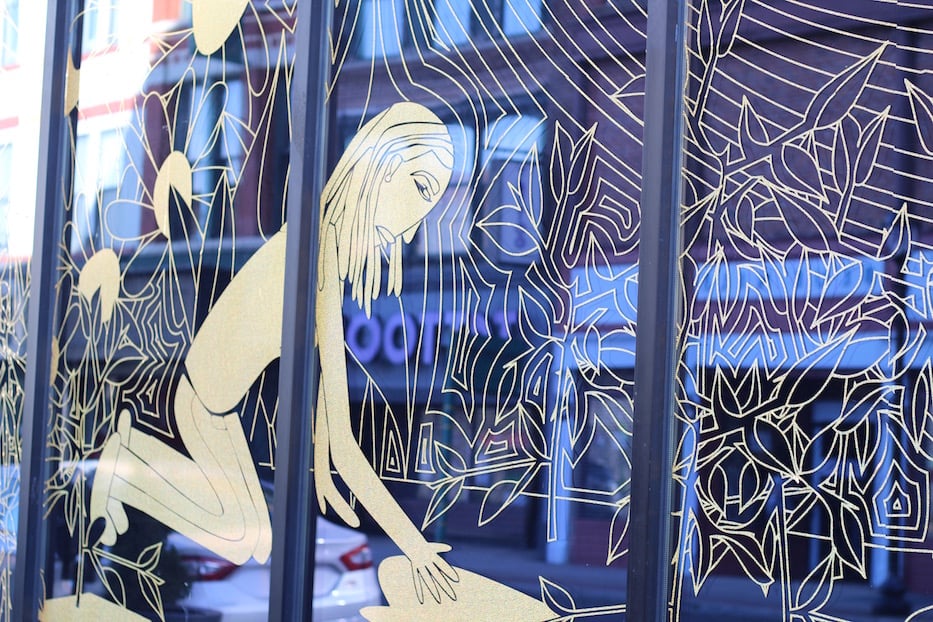 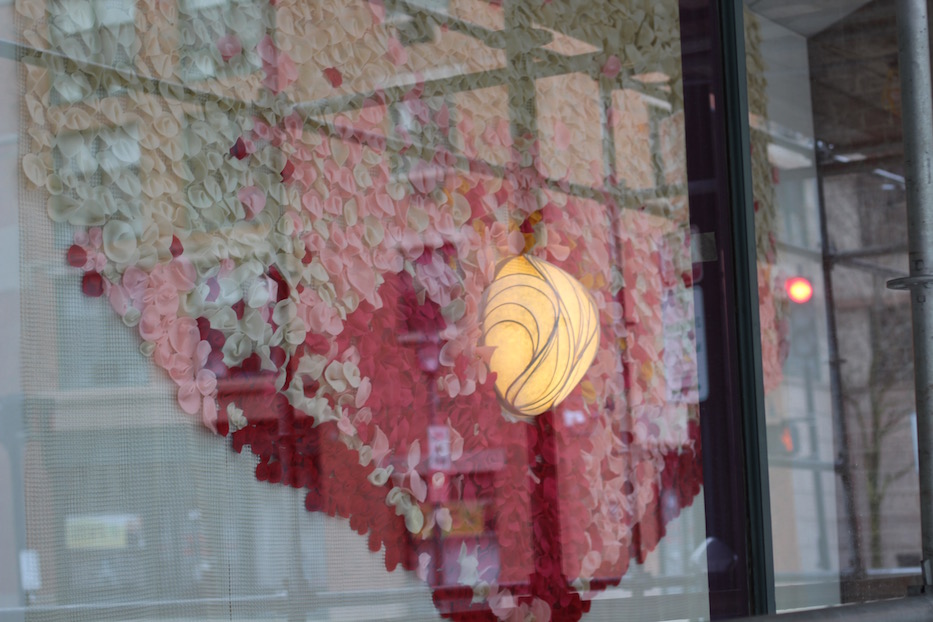 At the end of Orange Street the image rises up unexpectedly, a bright spot beneath scaffolding and shops that have been shuttered for at least a month. Red and pink petals explode behind glass, clinging to white ones as they spread out. An orb glows orange at the center, like a sun in the center of a miniature daybreak.

Mengxi "Althea" Rao’s Untitled is the latest installation in “Windowed Worlds,” an ongoing public art initiative of Town Green Special Services District and several landlords downtown. In the face of COVID-19, Town Green has opted to keep the program running as a way to support local artists and promote a vibrant downtown, even as many of its businesses move to takeout or close their doors for the foreseeable future.

“Social distancing from COVID-19 has definitely underscored the importance of fostering beautiful, visually uplifting outdoor urban spaces to refresh us on our solitary walks around the block,” Bickley wrote in an email. “Not to mention how important it is right now to continue hiring freelance makers and artists who are among the vulnerable workforce groups.”

While the project was born last year, it has taken on a new sort of significance in the midst of COVID-19. In the city’s Ninth Square neighborhood, windows on Chapel and Orange Street beckon with designs, as if the artists are popping out cheerily to say hello. Several have used their space to spread a visual gospel of service and community in a time when New Haveners may need it most. 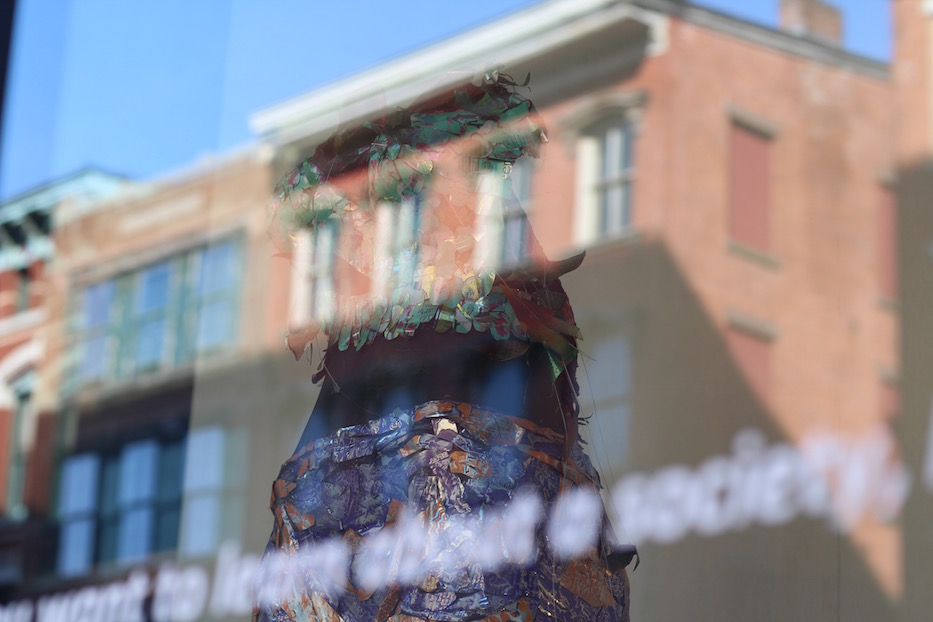 Across the street from CVS and a now-shuttered Blue Nile and Civvies Vintage (the store has maintained an online presence), Faustin Adeniran’s Hustle asks a viewer to come closer, as the shape of a woman emerges from a pile of discarded soda cans and a collaged, colorful two-part bodice. In the midst of a pandemic that has cancelled his own work as a traveling and teaching artist, he said the piece has been a sort of happiness in his own life.

The piece was originally inspired by a woman that Adeniran met on a trip to New York, a Sudanese immigrant who was collecting cans to raise extra money for herself and her family. After he introduced himself as an artist and writer, she told him that she could not find work, and had been forced to collect cans in order to live. The title, an homage to her, comes from the artist’s belief that most Americans have been forced into a system that pushes them to hustle almost constantly

“You have this idea of America being a paradise, and you come to America and see a paradise,” he said in a recent phone interview. “She comes to America to fulfill this American dream, and still she finds herself collecting cans.”

As the figure appears—a tight, sculpted top and full, metallic skirt—Adeniran invites the viewer to take in, analyze, and interrogate a world in which he’s turned that which is perceived as disposable into a piece of enduring beauty. He said it was important to him to make the figure a woman, as a nod to the socioeconomic burden that fell disproportionately on women of color well before a pandemic. 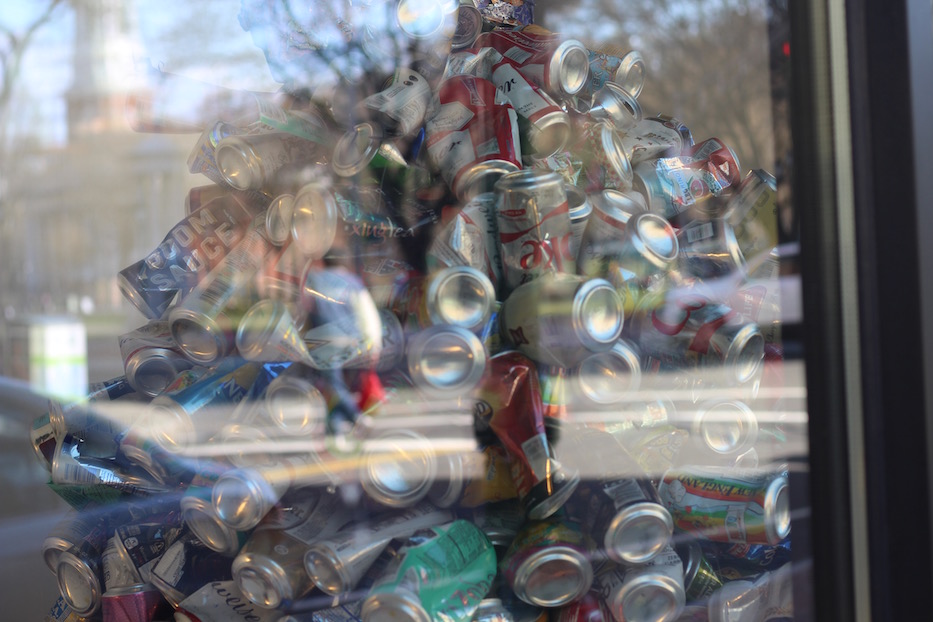 Details reveal themselves one by one: there are finely interlocking strips of blue-green, orange and purple aluminum, delicate as they rest on a mannequin’s slender shape. Some soda cans are bent and battered, others are so intact they could still be full. Blocky white text scrolls across the window. The overall work pushes an onlooker to second-guess how quickly they may discard and dispose of the materials in their own life.

“It's amazing what we throw away,” he said. “That shows the disparity that is so much in existence in our society. Think about New Haven. Even before the pandemic, we had a lot of redlining. The amount of homelessness in New Haven is so much higher than any town around. I feel like the piece should call for an awakening. Like, how much can society do to help?”

That gentle call to action echoes through Josephine Ankrah’s Tending Girl, the gold-and-glass reflection of which glitters between Hustle and Lux, a multimedia piece from students at the Paier College of Art.

In the image, a willowy girl kneels down to tend the patch of land beside her feet. The fingers on her right hand fan out; her left steadies her just so. Her lips are taut but smiling. Eyes look downward, soft but focused. For viewers that know Ankrah’s work, it’s hard not to see it as a self portrait, as in her previous Hula Girl.

Line drawings burst into being around her: wild, shimmering zigzags around reflected slivers of sky; trees and bushes with full, veined leaves; huge sunflowers with petals that seem to windmill out as one watches. Rays of sun crowd in from the top right corner. The girl, unbothered, continues to care for the earth around her.

“I actually think the timing is kind of special,” she said. “Sometimes I have to force myself to go outside—mostly because I feel so bogged down with schoolwork, and I find that I really have to make a decision to listen to my body, listen to what I need and act on it. When I do take a walk, seeing the piece makes it a little bit sweeter.”

She added that the piece, which she installed during her spring break, has become a reminder to practice self-care during COVID-19. When she installed Tending Girl, Ankrah thought she would be heading back to a routine that included school work and the occasional bike ride or piece of art.

Instead, she is doing online learning. In part, she said it goes back to the original intent of the piece, which she posted to Instagram with the question, “How do you tend to your soul?”

“It gives me a good feeling, to see that it’s still there,” she said. “I think everybody in this time needs some tending.” 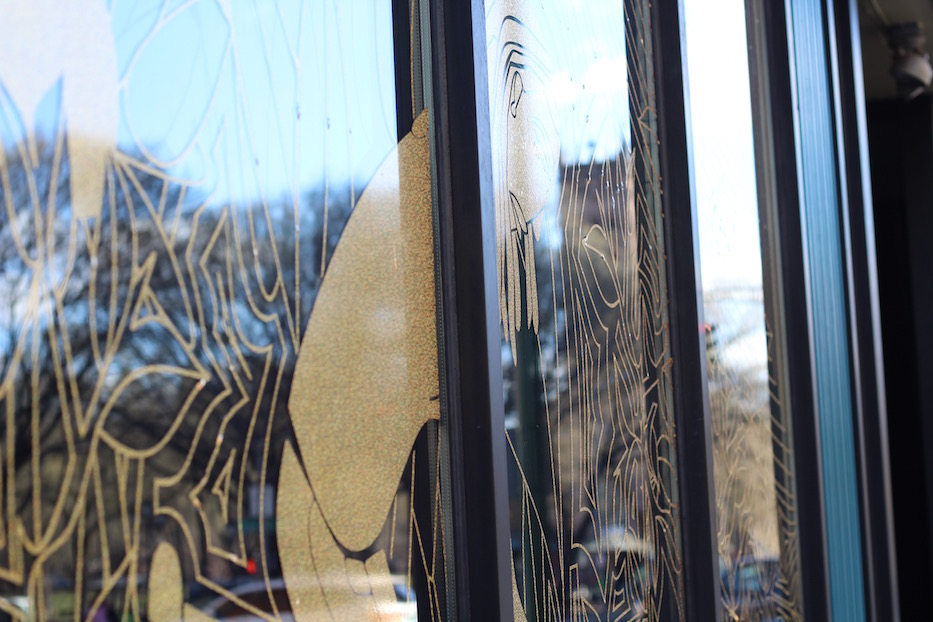 Rao, who has installed her work in the window next to Skappo Merkato, has used the installation to push a public health message that rang true before COVID-19. While her work is currently not titled, the piece is part of her project Vagina Chorus, a part of which she showed at City-Wide Open Studios last October.

When she applied to Town Green, the installation was originally proposed as A Great Wall Of Vulvas. Then she got the news that the landlord would not allow anything that referenced female anatomy. She has left the work untitled but referenced Vagina Chorus on Town Green’s website.

In the window, pink, red and white petals bloom across a fabric background, rising up to gather around a ball of warm, honey-colored light. The petals, Rao explained in a phone interview, are meant to symbolize vulvas. Light blue kegel exercisers hang at opposite sides of the installation, suspended there like pendulums waiting to be put into motion.

In the larger Vagina Chorus project, the artist transforms the pelvic floor strengthening routines known as kegel exercises into an interactive symphony with a public health bent. She set out to create something similar downtown, adding timed light elements that passersby could take comfort in. The setting feels right: the piece sits beside a now-empty yoga studio.

“I wanted to include elements of light sculpture into the subject to make it a very soothing space,” she said. “It invites one to start imagining these traditionally very taboo subjects. I hope to tie that healing quality of the light to people’s emotional burden. It's part of the healing process. It makes you feel like it's a safe place.”

Without the proper title, Rao was originally concerned that viewers would not understand the full depth or message of the piece. Vagina Chorus, which is ongoing, uses Perifit’s Bluetooth Kegel training devices to “map raw vaginal pressure data onto musical notes,” meaning that one’s vagina strengthening exercises can literally make music.

The project directly takes on the incontinence that many women experience after pregnancy and childbirth, and as their bodies age. Without a title to contextualize it, Rao worried that viewers wouldn’t know what it was about. Initially, she’d been okay with the discomfort and challenge that the work instilled—it was part of why she’d taken the project on. Then, as COVID-19 hit and she moved up her installation date, her understanding of the work’s purpose changed.

“What I am doing right now is part of creating a more colorful landscape inside a city where people feel like they are in isolation,” she said. “The soft quality of the felt, the healing quality of the light ... it suits the moment. It lost a certain value when I was told that I couldn't call it what I wanted to call it in a public space. But I hope it’s actually improving people’s daily experience. I hope it makes them happy.”

“Now it's time to comfort people, to pamper them a bit, to tell people this as well will pass,” she added in a follow-up email. “To create a sense of safety, accepting and judgement free, to provide a space where people can resort to when they are overwhelmed, to collect themselves when they are tired from anxiety, to be delighted when they are on their solitary walk.”