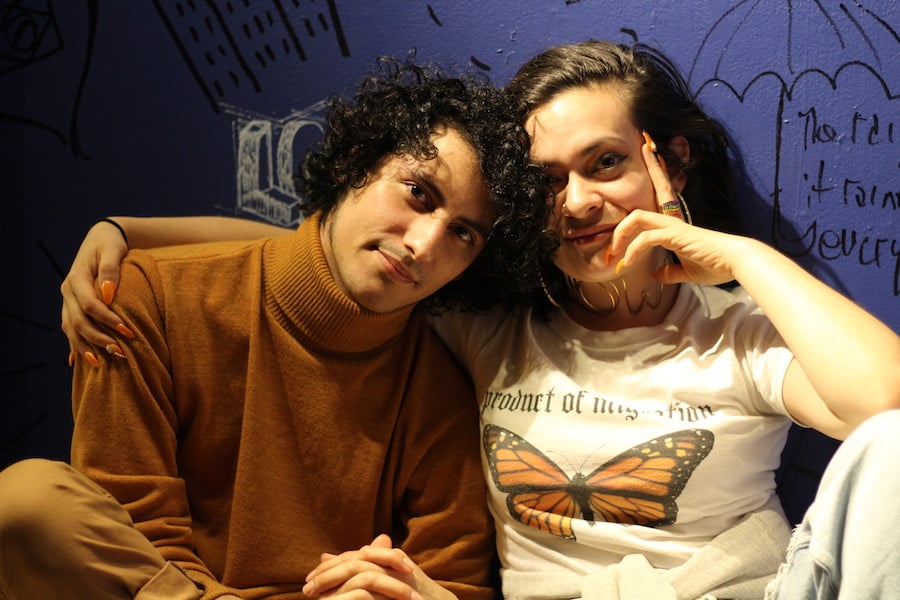 At first, it isn’t clear why the television set isn’t working. Ángel fiddles with the dials and fusses with the remote. She bends to look at it from the side. The sound of Donald Trump swells in the small room, soaking the walls. Alma’s voice matches it, a tide, rising. The lights go out. For a moment, everything is quiet. Then the two start looking for the candles.

“Get la virgen, el santo, Jesús, and the one with Obama,” Alma says. Even in the strange in-between of darkness, it feels like a laugh line. And in many ways, it is.

This is the funny and often bittersweet world of Benjamin Benne’s Alma, the last show to hit the Yale Cabaret this season. Written by Benne and directed by Cat Rodríguez, the play dives deep into fierce maternal love, citizenship and immigration, and what the American Dream means when it is literally turned on its head. It runs this Thursday through Saturday at the Cab’s Park Street blackbox; tickets and more information are available here.

The play—which is not about Donald Trump, and not not about Donald Trump either—follows Alma (Ilia Isorelýs Paulino) and her daughter Ángel (Ciara McMillian) on the eve of Ángel’s SAT exam somewhere in Los Angeles county. The test is a big deal: the results will determine where Ángel can go to college, and whether she can even apply. The air rustles with the chips and salsa that Alma has brought home to celebrate; the night seems electric. We don’t know exactly where we are in time, and that doesn’t seem to matter.

But then Alma comes home to an empty house. Ángel’s flashcards are on the table. And when she does barge through the door moments later, it’s clear she hasn’t been studying at all. Something’s not right, and not in a quick-fix sort of way.

Told in a mix of English and Spanish, Alma is their conversation from that night, just as intimate and odd and funny as family is in real life. As the work unravels in their clean, brightly painted single-family home, several layers peel themselves back one by one, revealing the complexity behind not just the current political landscape, but living in the United States in this century at all.

“It’s a living room play, and all the action unfolds in real time,” said Benne, a first year student in playwriting at the Yale School of Drama. “So we basically get to remove a wall from their apartment and basically witness a real-time conversation between the two of them.”

For him, the making of the play has been as meaningful as watching it bloom. Alma has its roots in the summer of 2015, as presidential candidates started to roll out their policy platforms around the country. Driving home one day—Benne grew up and was living in a neighborhood called Hacienda Heights, just outside Los Angeles—he heard Anne Coulter on National Public Radio, exhorting Trump’s proposed border wall at a rally.

"I love the idea of the Great Wall of Trump," she had said at rallies around the same time. "I want to have a two drink minimum. Make it a big world-wide tourist attraction and everyday live drone shows whenever anyone tries to cross the border."

Benne listened as a member of the audience cut in, ecstatic at the promise of a wall. It was enough to get him to pull over to the side of the road, without changing the dial. His mind went right to his mom, an immigrant from Guatemala who had come to the U.S. in the late 1970s, and qualified for amnesty under then-president Ronald Reagan.

“That felt like a direct attack not just on people of Mexican heritage, but on the Latinx identity in the United States in general,” he recalled in an interview Tuesday. “Even at that point in time, it just felt kind of unbelievable to me how light people were treating it in that early stage, and how damaging even running on a platform like that was. How he was really unchecked at that point in time.”

Benne started writing Alma shortly thereafter, setting it close to the area where he grew up without a specific point in time in mind. He worked on drafts right up to the election, watching as Trump grew in power and popularity. Outside, the world seemed confident that Hillary Clinton would take the election. Friends and colleagues assured him that the project wouldn’t resonate after Nov. 9. When results rolled in and he realized that it would, “I couldn’t think of writing anything else.”

“The whole point in writing it is that it didn’t matter if he won or didn’t win,” Benne said. “It was dangerous enough that he was able to say the things that he was saying, and totally scapegoat an entire people without being checked on it.”

He’s been working on it since. Last summer, he and Rodríguez workshopped the play at the Eugene O’ Neill Theater Center. For both of them, Rodríguez said, it was important to tease out the show’s sense of joy and humor amidst a politically volatile backdrop. The show is as personal as it is current for her: her dad left Nicaragua in the 1970s, moving to Mexico and then to the United States. In between he met her mom, a Louisiana local who was living in Mexico. He's not a citizen, but he's not undocumented either.

And so, in the face of something not funny, the two have found reason for laughter. Yes, Alma and Ángel talk about immigration—but there’s also liberal use of la chancla, a flip-flop turned into an instrument of discipline. There are stories about spiders that take on almost mythical proportions, and moments with light and darkness that become straight up poetic. The two tease each other about language acquisition to show how vast their love is. They become a portrait of a a mother mothering and a daughter mothering too.

“It centers joy,” Rodríguez said. “Liberation, struggle—we have to work to hope. Neither joy nor hope is passive. This is not an issue play. This is a play about two women who love each other fiercely and are going to fight for each other just as fiercely.”

It’s also a message that both Benne and Rodríguez have taken with them outside the Cab, as they’ve thought about how the play resonates in New Haven. Last weekend, the cast and crew moved rehearsal to First and Summerfield United Methodist Church, where Nelson Pinos has been seeking sanctuary from Immigrations and Customs Enforcement (ICE) officials since November 2017.

Benne recalled the joy of watching Pinos look on as his son Brandon giggled and danced at videos he found on YouTube. As Brandon danced around, Benne recalled, Pinos cracked a smile, laughing because his son was laughing. As the play premieres just blocks from the church, Benne said that he hopes that the audience will have the same sort of experience watching Alma and her daughter interact.

Rodríguez recalled another moment midway through rehearsal, as Paulino held up a flashcard and looked to McMillian, totally in character.

Next to Rodríguez, Pinos’ son Brandon reached around and grabbed his dad’s shirt. "Sanctuary’s like here, dad!” he whispered. “It’s here!”

Except Alma is at home, and Nelson Pinos is not. Not yet, at least. During the play’s run, the Cab's creative team will be raising funds for the Pinos family, in advance of a May 14 court date in Minneapolis before the Eighth Circuit Court of Appeals. Producer Eliza Orleans has installed a mini photo-gallery outside its blackbox theater, with a copy of Pinos' daughter Kelly’s New York Times op-ed at the center.

Because Pinos cannot come to the play, Rodríguez is trying to bring the play to him. As of Thursday morning, she said that she and First and Summerfield Pastor Vicki Flippin are in discussion about a community production at the church in late May, after both the end of classes and Pinos' court date in Minnesota. She added that she and Flippin "both hope that the event will be a celebration met with good news of Nelson’s liberation."

“We have to understand how our struggles are interwoven,” she added. “Because our liberation is interwoven as well.”