Eerie music played as two dozen people made their way to the corner of Grove and Ashum Streets. Crisp leaves crackled beneath feet as attendees gathered at the edge of the Jean Pope Memorial Park. Behind them stood an ominous, gated-in brick building—the Yale Central Power Plant.

“Trick or treat, climate change must be beat,” the crowd chanted.

NHCM has proposed using 10 percent of New Haven’s American Rescue Plan funding towards climate projects. The city is slated to receive almost $100 million in federal relief, $26.3 million of which the Board of Alders has already voted on. In the interest of full disclosure, this reporter was an active member of the NHCM during their time in New Haven.

“We’ve decided to host this terrifying event because Halloween is a time to show the ugly and scary, and nothing is uglier or scarier than climate change and climate inaction,” said emcee and  Yale University freshman Kiana Flores, dressed in a cloak and witch hat. “This is a follow up to our September 24 event where we demanded Yale and Mayor Justin Elicker invest in climate action. Mayor Elicker made claims to start a climate department and that the City would invest part of the American Rescue Plan in climate action. We want to let him know that we’re still waiting, and we hope he’s still listening.” 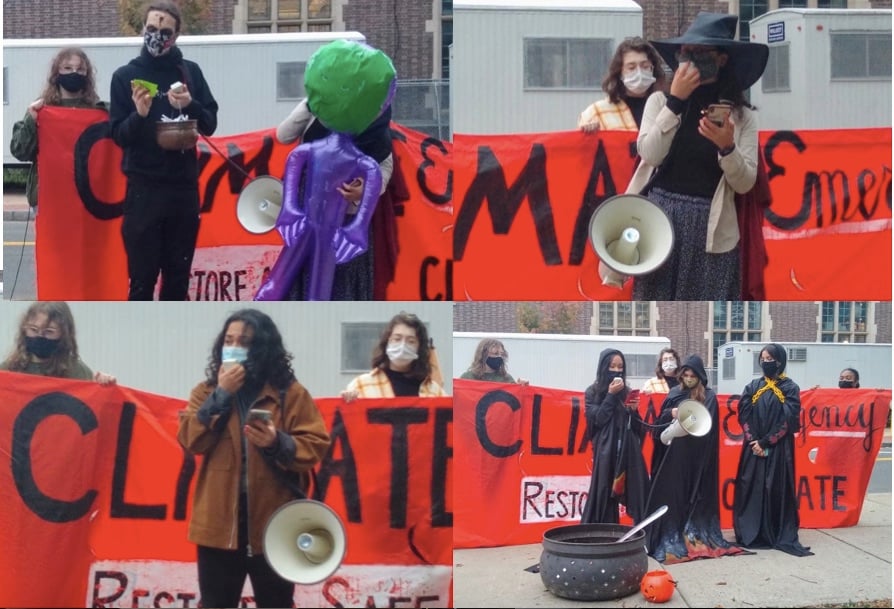 Lumisa Bista, a sophomore at Yale who is a member of the Yale Endowment Justice Coalition, noted that the Central Power Plant is one of four power plants Yale runs, three of which are in New Haven. In 2019, the Central Power Plant emitted 104 thousand metric tons of carbon emissions, translating to $10,400,000 of climate debt per year. Climate debt is calculated by considering the approximated social cost of carbon emissions.

“We call on Yale to eliminate its reliance on oil and natural gas, fully divest its endowment from fossil fuels, and invest in a clean future for New Haven and its residents,” she said.

Draped in black cloaks, the Ghosts of Climate Past, Present, and Future also paid a visit to warn the crowd of the impacts of climate change threatening running out of control.

NHCM member and Engineering and Science University Magnet School (ESUMS) senior Patricia Joseph was the Ghost of Climate Past, speaking of a history of smog, sea level rise, and hot days from the 1960s through the 2000s in the United States.

“We should have learned the facts that climate change is bound to haunt us and future generations if we are not quick to act,” she said. 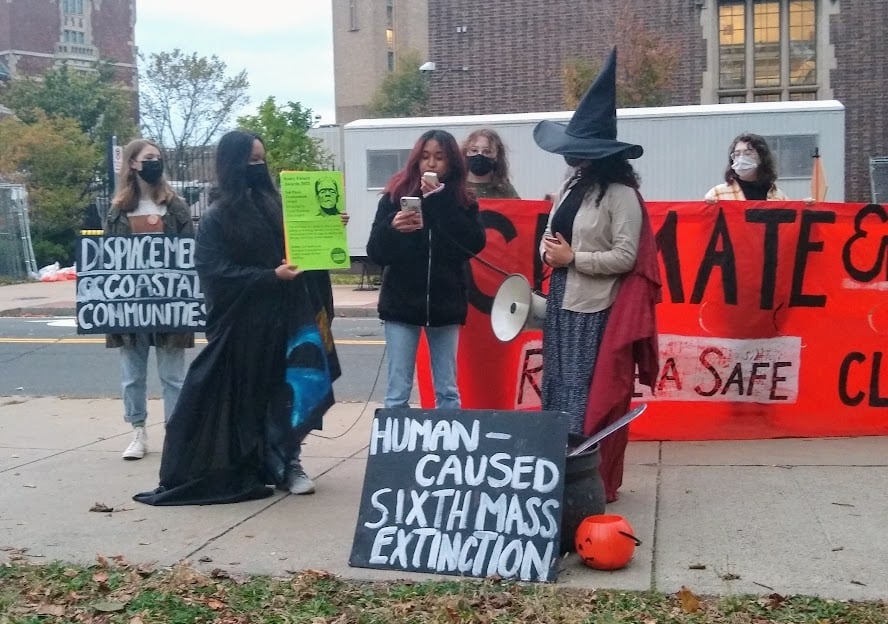 NHCM member and Wilbur Cross High School sophomore Rosie Hampson spoke next as the Ghost of Climate Present. She said that as of 2021, little progress has been made since the first United Nations’ convention on climate change. She reiterated the air pollution and high rate of asthma hospitalizations in New Haven impacting people of color, low-income people, women, children, and those with underlying health conditions the worst.

Lastly, NHCM member and Cooperative Arts and Humanities High School sophomore Sophia Rivkin set the scene for 2050 as the Ghost of Climate Future, wearing a set of yellow chains crossed over her cloak.

“The air we breathe is muggy and sharp, the sun is extra harsh, large weather events and storms are frequent to the point that it is difficult for our communities to recover and rebuild,” she said. “Since these occurrences happen so often, there are many displaced people and many who suffer from disease and illness from not receiving the help they need. Our oceans have an acidic pH due to absorbing so much CO2 and it is no longer a habitable environment for the fish.”

She said that it was not too late for the people of the present to act to prevent a future of climate injustices.

“The chain around my neck represents me, your future, being restrained by your actions of today,” she said. “For me, it is too late. But you all still have time if you choose your actions wisely.” 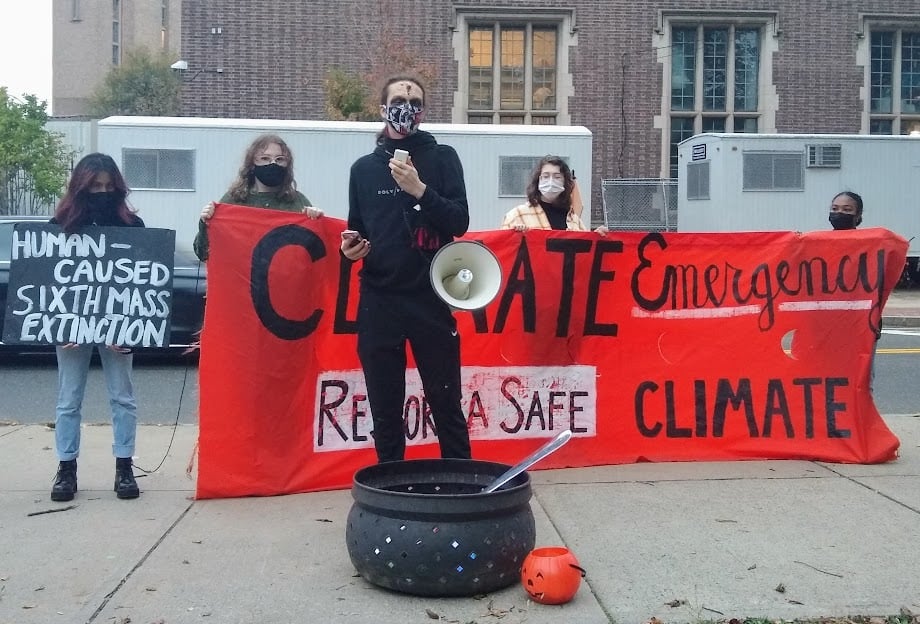 NHCM member Benjamin Parsons, and a freshman at the University of Hartford Art School.

NHCM member Benjamin Parsons, and a freshman at the University of Hartford Art School, wore special effects makeup as he spoke of a global emergency “even more urgent and terrifying than the zombie apocalypse”—the climate crisis.

He highlighted the “zombie infrastructure” in Connecticut, such as the Yale Central Power Plant, Killingly Energy Center, and inefficient transportation system.

“We cannot continue to let this zombie infrastructure plague our health and well-being,'' he said. “The city of New Haven must invest in new infrastructure so that we can avoid certain disaster and wake up from this climate nightmare in Connecticut.”

To further stress the dire circumstances, Parsons read out scary climate change facts on behalf of the greenhouse gas goblin—a goblin face pasted onto a blow-up alien—by unwrapping the messages of tissue paper crafted to resemble candies. Following each fact, the crowd booed in response. 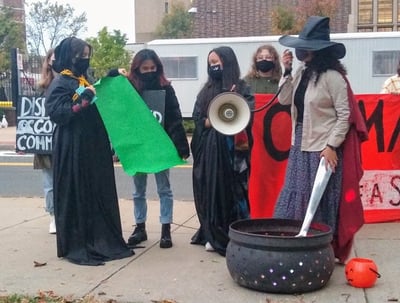 But the group was sure to stress that not all hope was lost. Speakers brewed up a potion that could make New Haven more resilient in the face of climate change. Reading off of a large construction paper scroll with the “recipe,” Flores recited each demand as an ingredient, from greenspace work to beautify the city to free bus passes for youth. After each ingredient was added, she tossed a handful of confetti to the lit-up cauldron below her. To finish it off, she gave it a stir with a giant spoon.

“If only it were that easy in real life!” Flores joked to the crowd. 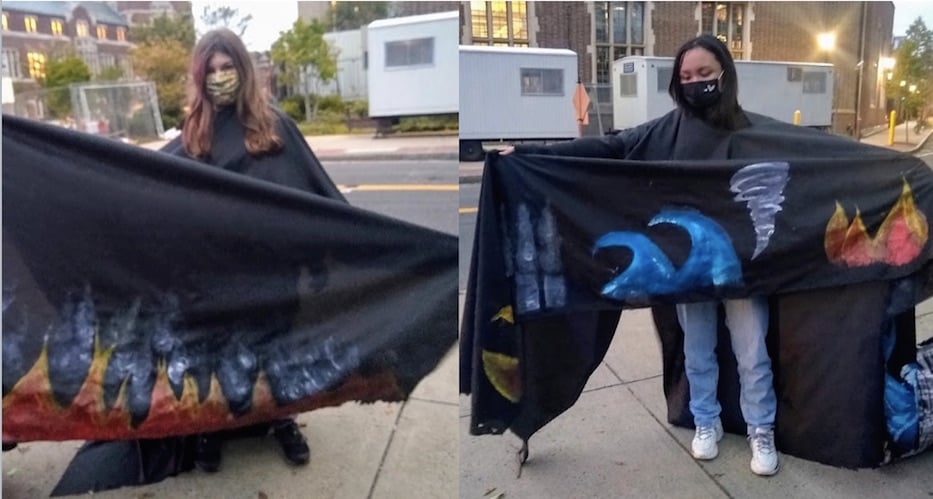 Artistic preparation for the event began the weekend before, when NHCM members gathered on the New Haven Green to create the ghost costumes, the face of the greenhouse gas goblin, and prepare the candy wrappers. The organizer of the preparation event, Wilbur Cross High School junior Young In Kim, said that NHCM decided it should be an art-themed action in order to embrace this season of costumes and makeup.

“I think we really conveyed that climate change is scary and spooky,” Kim said.

Parsons, a narrative artist, said he sees art as a way to bridge the gap present in peoples’ access to education and information. He sees art playing a role throughout activism, ranging from art to advertise an event or campaign to art going out to the campaign’s target. He also sees art and activism complement each other since visual art can be created through recycled or discarded material. In a personal activism project called Letter to Lamont, Parsons used graphic design to urge others to demand climate action from Governor Lamont.

A standout artistic component of the rally were the upcycled cloaks for the Ghosts of Climate Past and Present hand painted by Hampson. Hers depicted fires and smoke while Joseph’s depicted various climate disasters such as tornadoes and tsunamis. She painted wildfires on the climate present cloak to show that it is happening now and to help people connect with that though they are not happening in Connecticut.

“I can see [art] as a way to really help people connect with climate change and feel more inspired to act because sometimes statistics and facts don’t reach people, but art has a lot of power to do that,” she said. “So I think it’s a great way to really convey a message to people that we need to act.”

Learn more about NHCM through their website. You can also keep up to date on their work through their Instagram, Facebook, Twitter, YouTube, and TikTok. In the interest of full transparency, this writer is a member of the New Haven Climate Movement Youth Action Team.