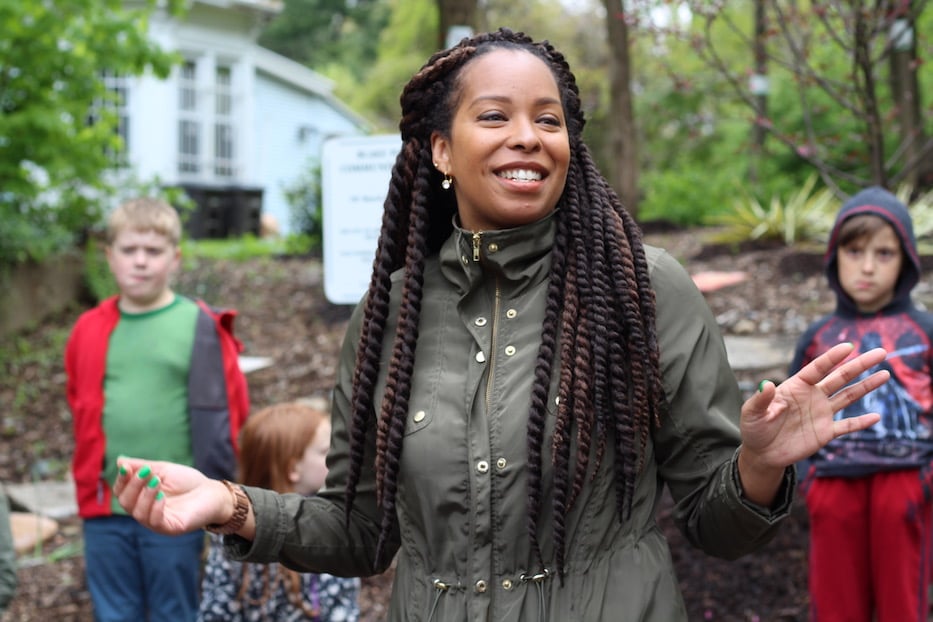 There’s a mural where grime and dust once covered the walls. Saplings, branches extended, have replaced overhanging dead trees. Three stone steps beckon from the street, and weave a path into the woods. A thicket of yucca bushes begs visitors to come and play, their sprigs waving hello.

These are some of the features of the new-old Blake Street Pocket Park, dedicated Tuesday in a small community celebration near the intersection of Blake and Diamond Streets in the city’s Beaver Hills neighborhood. After a year of work from the Southwest Beaver Hills Neighborhood Association, Livable City Initiative (LCI), Urban Resources Initiative (URI) and some pint-sized volunteers from Elm City Montessori, the park has been transformed into an urban oasis—and is ready for another summer of green-thumbed expansion.

“With all the craziness that’s happening throughout the world, this is a point which really shows how our city’s able to shine,” said Beaver Hills Alder Richard Furlow, pointing out faces he recognized from Pelham Lane, Ruby and Wellington Streets, Young and Diamond Streets, Osborne, Royden and Munson Streets and Whalley Avenue. “When neighbors become a community and a community comes together and makes things work. And I couldn’t be more proud.” 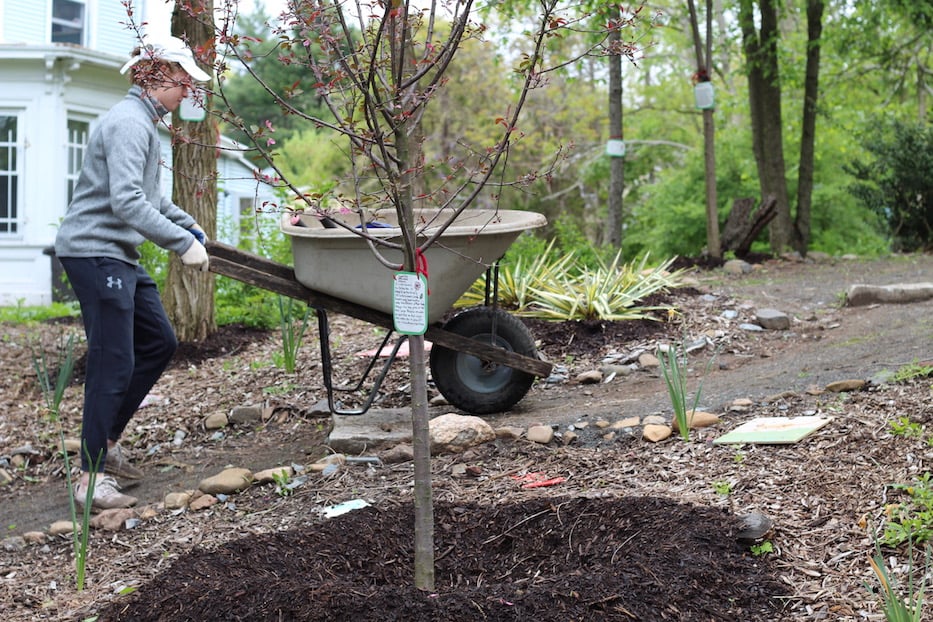 The revitalization has been years in the making. For decades, the park sat as an empty lot owned by the city, with thick, impenetrable woods on a small hill behind it. Once a year, students from Southern Connecticut State University (SCSU) would come to spruce up the area. Then grasses would grow long again and trash would pile up. There was no way to navigate the expanse, which stretches from Blake Street all the way back to Ruby Street.

Neighborhood Association member Patrice Antoine, who has lived in Beaver Hills for 12 years and worked on the cleanup, recalled the spot as a local eyesore. Her kids couldn't play there because of the overgrown mess and trash pile up, she recalled. It didn't seem safe. And the woods literally swallowed objects up if one dared to walk through them.

“If you lost something in here, you were never going to get it back,” she said.

Then last May, author and AdvocateLab Founder Genese Clark—who is also Antoine’s twin sister—scored a grant from the city to hold a four-week family strengths series during the summer months. When she and Antoine were brainstorming a space, they landed on the park. As part of the series, Clark called on both participants and neighbors to come out for cleaning days. At the end of four weeks, the park looked tidier than it had for years (there are photos of the progress here). Clark’s daughter Madison Jones designed a mural, and the two held a community paint day for neighbors to brighten up the lot. 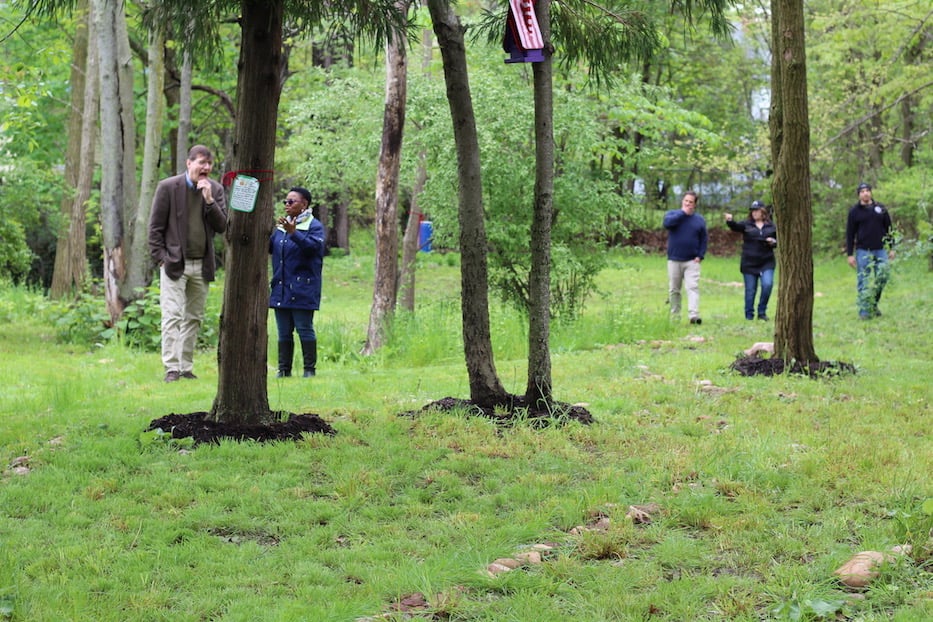 “It really got the neighborhood noticing this space,” Antoine recalled. “Believe it or not, the trash got cut down—there was hardly any trash over those four weeks. And people really started to respect the community a little bit more.”

For Antoine and Clark, the series was a glimpse into what the park might look like with more work. Last fall, the two convened meetings of the Southwest Beaver Hills Neighborhood Association, asking neighbors to envision a space for the community, maintained by the community. Staff from LCI came onboard—“we have the best neighborhood specialist” in Maggie Fernandez, Clark said—to help on the city’s end.

The Yale School of Forestry also hopped on with an intern from URI, who did soil and greenery samples to figure out which trees were weeds and which were dying. She advised the group on what types of plants would do well in the park, URI bringing supplies for volunteers to work with. Neighbors offered their hose to keep the space green. And each weekend, local volunteers kept coming out, laying down stones and stone dust to make a path winding back into the woods, mulching the area, and tending to young saplings that were just starting to get used to the soil. 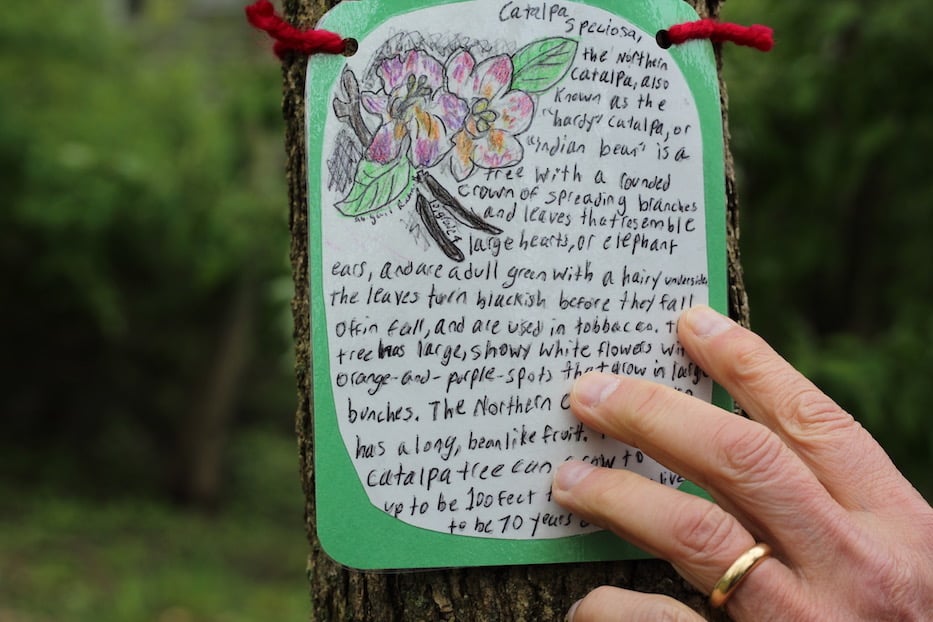 This spring, volunteers also got hand from Elm City Montessori students, who spent Earth Day planting, mulching and weeding. After coming out on in April, students also “adopted” trees in the park, writing labels with their Latin names and descriptions. Tuesday, teacher Ramya Subramanian described it as an academic exercise, rooted in outdoor activity and community connection.

“Students, especially today, are so engaged in their electronic world that we are constantly finding ways to get them outside,” she said. “To learn the interconnectedness of not just animals and plants but also of people.”

As attendees trickled in Tuesday, Antoine and Clark took the group on a small tour, pointing out holly, yucca shrubs, and black walnut trees. Clark paused to point out new details—bright laminated labels on the trees, a birdhouse with fresh black and purple paint, fallen black walnuts with fuzzy green coats and inky black shells. Around her, students from Elm City Montessori and Emlin & Friends Family Child Care played in the damp dirt and scurried to find the trees they’d written labels for.

“Really, it looks amazing now,” Antoine said. “It went from just woods to a usable green space. It’s really, really awesome … this is our space, this is our community, and we’re ready to use it!”

As attendees came down from the park back onto the lot, they entered one final phase of the dedication with Artsucation Academy Network Founder and Director Hanan Hameen, who had transformed the cracked pavement into a bright drum circle waiting for players. One by one, attendees found their seats, adults standing on a ring outside so kids could get in on the action. They began to beat the drum skin and clap with the rhythm, sound echoing all the way back to Ruby Street.

Emlin & Friends Director Candice Dormon, who has lived in the neighborhood for seven years, said that she’s already been able to see a difference in the way both neighbors and local families interact with the space. While running a daycare, she said she’s been frustrated by the fact that there aren’t local parks within walking distance. Now, she can access one right around the corner. As a grin spread across her face, she recalled taking kids outside to play in the snow and dirt, watching them delight in getting their hands dirty. Like, really dirty. 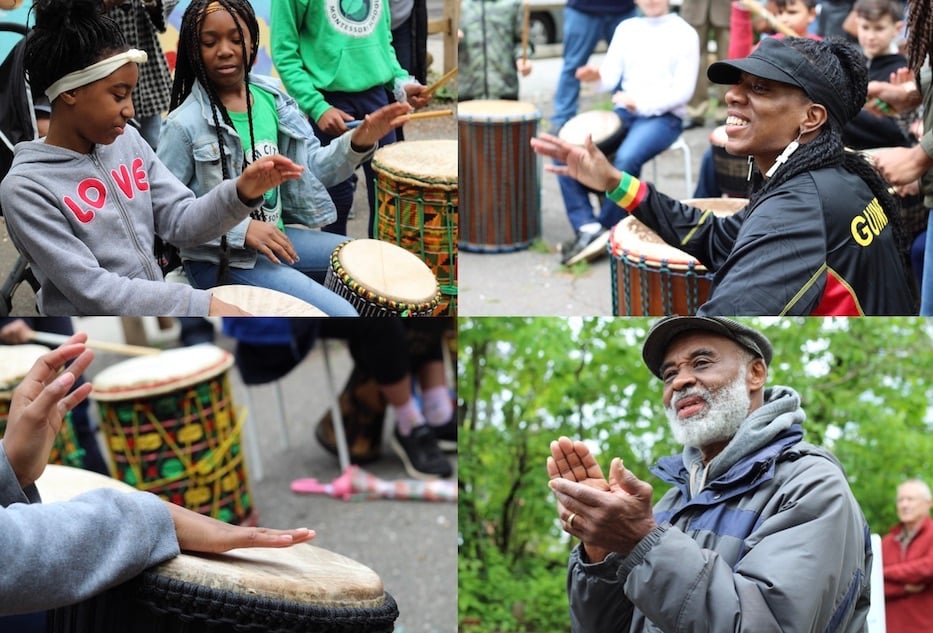 Jarold Roberts (pictured in the collage above), who has lived on Diamond Street for three decades and volunteered since the first community workday last year, praised the dedication as “wonderful” and long overdue. In his 30 years in the neighborhood, he said he had long regarded the space as “such an eyesore,” watching illegal activity go down at night and garbage pile up during the day. Now, he brings his grandchildren there to play, and paint during the summer. As he spoke, he rocked his 9-month-old grandson, one hand on a stroller as the other kept time with the drums.

This summer, Clark said volunteers plan to extend the park's existing path and add to the mural, which has not yet covered the entirety of a wall surrounding the lot.

For more from the dedication, check out the Facebook Live videos below.