A Muralist Grows His Citywide Footprint 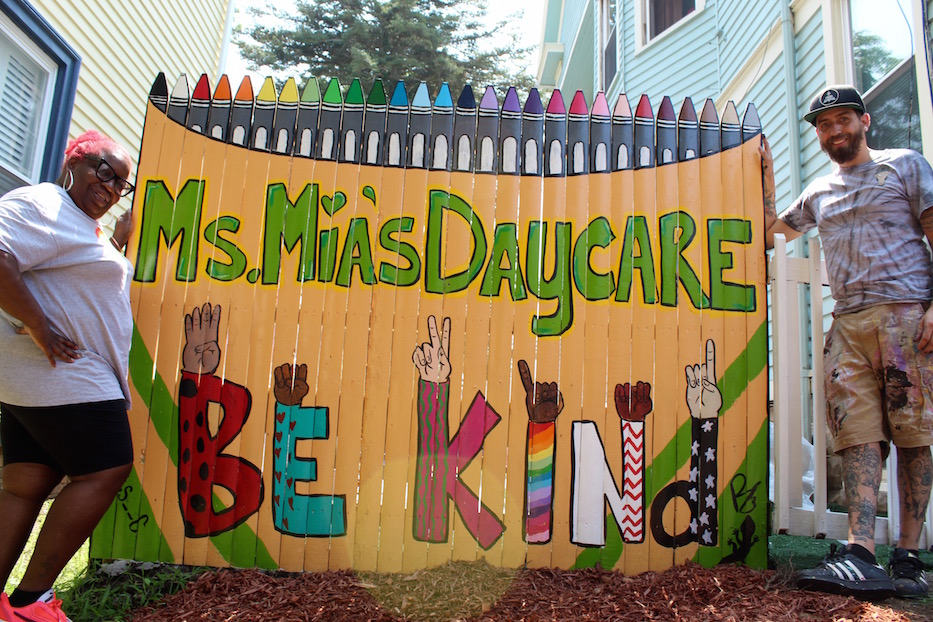 The gecko slithers up a box of crayons, freezing in a patch of bright green. Above him, a riot of color unfolds. There are hearts and polka dots and teardrop shapes, rainbow stripes on a matchstick of a letter “i,” a starry night sky patterned across the letter “d.” Be Kind, the message reads. Atop the letters, multicolored hands spell out the words in American Sign Language.

It’s the way artist Carlos Perez is making his mark in New Haven, and paying homage to a member of his family gone far too soon. This year, the painter and tattoo artist has been working to spread his footprint across the city, bringing the legacy of his late niece, Tiana Rivera, with him everywhere he goes. This fall, he hopes to bring that work to Fair Haven.

“My goal is to bring community murals to the community, by the community,” he said in a recent interview outside Ms. Mia’s Day Care, the Compton Street childcare center where he recently painted two small murals with children. “If I can have my first mural like this, meaning everybody gets their hands in it, that would be awesome.” 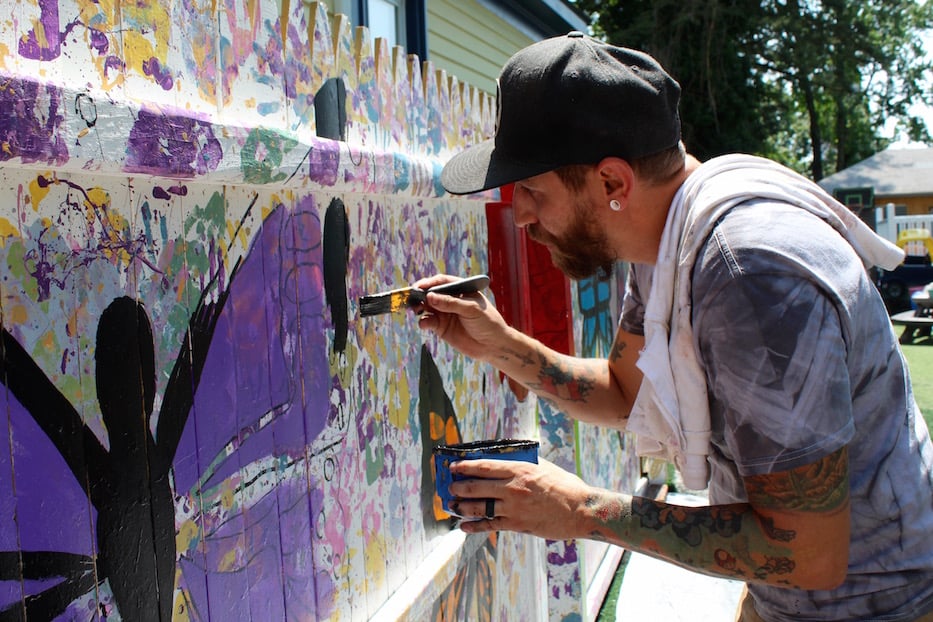 “If I can have my first mural like this, meaning everybody gets their hands in it, that would be awesome.”

Perez—who is affectionately known by only his last name—is a son of the Hill and Fair Haven, with a little bit of West Rock, Puerto Rico and most recently Meriden thrown in. Raised by his grandmother, the artist spent the first several years of his life in the Hill, then moved to the Rockview Apartments when he was in middle school.

Even then, he said, he was drawn to the visual arts as a form of self-expression. On a trip to visit family in Puerto Rico, he fell in love with a six-foot wall graffitied with colorful Looney Tunes characters. Back in New Haven, he would later flex those muscles as a graffiti artist and small-scale muralist. He just didn’t know it then.

Instead, the artist took a winding path to public art. As a teenager, Perez started classes at Wilbur Cross High School, then moved with his grandmother to Puerto Rico. After moving back to Connecticut at 19, he met his wife and put artwork on the back burner as he became a dad. When his first son was born—he’s now a senior pursuing theater at Cooperative Arts & Humanities High School—Perez went back to school to finish his GED. 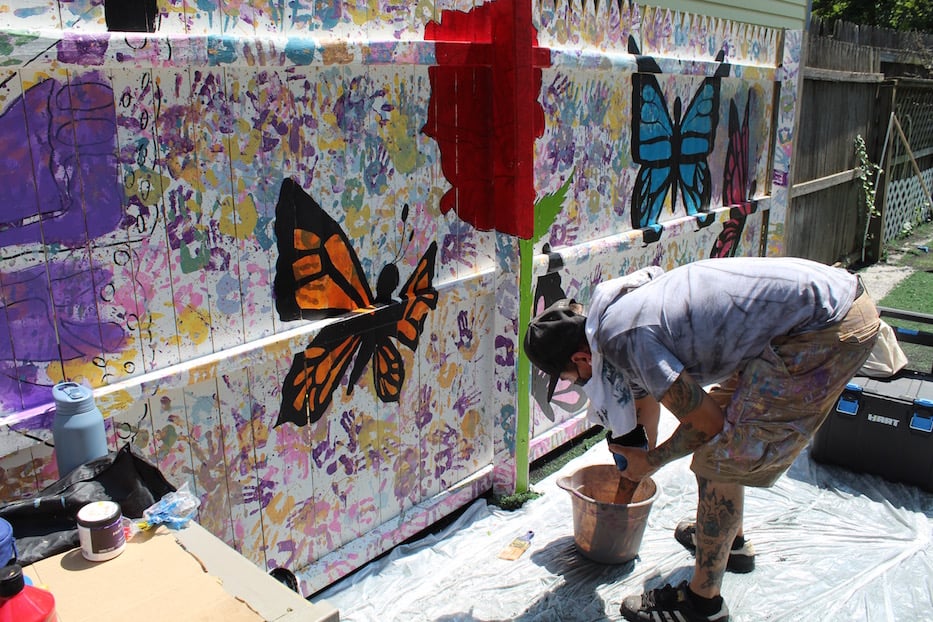 He was 21, and his head crackled with ideas. Even when he wasn’t thinking explicitly about art, “I used to doodle for her [his wife] all the time,” he said. He doodled while he held down jobs to support their growing family. He doodled while he studied for the GED exam and thought about what the next chapter in his life would look like. He doodled while navigating the first years of parenthood.

He was still doodling at 26, when their second child was born. Something clicked in his head.

“I turned to my wife, and I said, ‘I think I want to do tattoos,’” he recalled. Because he wasn’t affiliated with a shop, he started teaching himself and apprenticing where he could.

The tattoos made him famous not only with Elm City admirers, but also within his own family. In particular, it was his young niece Taina who took an interest in the art form while she was living with his family for a few years. Even after she and her family moved to Texas, the two stayed in close contact. She was there, peppering him with tattoo and art questions, when the world began to shut down last year.

When the artist’s day job at the metal manufacturer Ulbrich became a casualty of the Covid-19 pandemic, he added canvases to his repertoire and began honing his craft from his home. Tattoo shops were temporarily closed. His world was, for a moment, more still than it had been for years. It led to his first commission at Sharp Creations, a now-defunct barbershop just off Lombard Street.

“I was unemployed, and we all had a lot of time on our hands,” he said. “I was just looking for any gigs." When he got that first commission, "I took my time to get it right.” 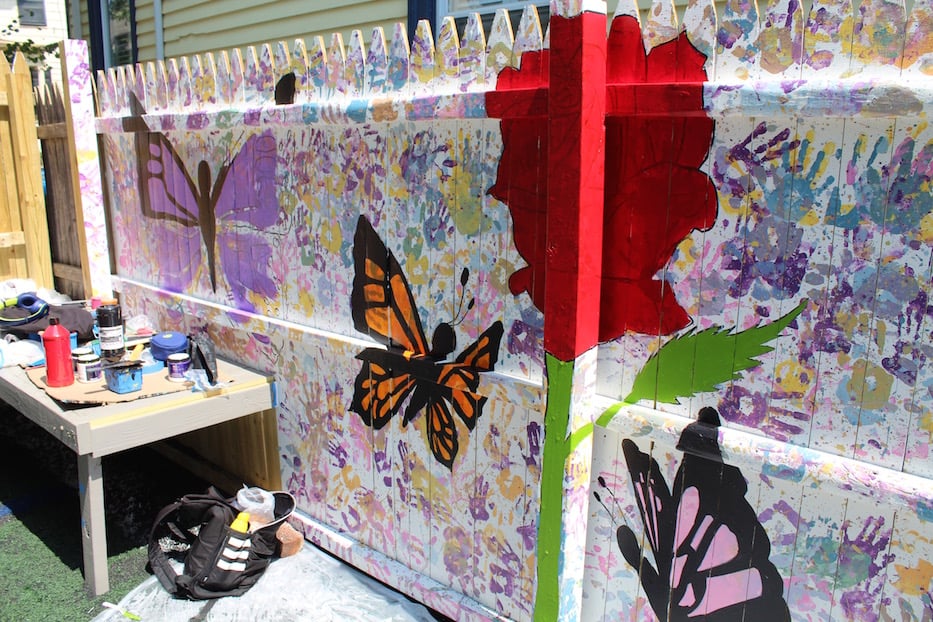 Perez said he thinks of last summer as a turning point in his work. In June 2020, his family chose not to travel to Texas for Rivera’s high school graduation because of the pandemic. Instead, he helped her make plans for a long-awaited tattoo to celebrate her 18th birthday. She was excited, he recalled; she had talked about getting a tattoo for years. “Because it was me” giving her advice, he said, her parents were enthusiastically onboard.

Then in July of last year, she died unexpectedly when a car crashed into the vehicle her friend was driving. She was a newly minted high school graduate just two weeks short of her 18th birthday. Perez, who still goes quiet when he speaks about her passing, went to Texas for the funeral. He came back determined to keep her legacy alive.

“She always wanted me to do something big with my art,” he said. “When I came back from Texas, that’s when I started doing the murals.”

Last year, he landed commissions with City Angels Baseball Academy, the Meriden Humane Society, and Black Lives Matter New Haven, including a mural on Temple Street that greets New Haveners as they walk, drive and take public transit through downtown. Early this year, he announced a collaboration with the clothing brand Querencia LLC. This July, he connected with Mia Franklin, who runs  Ms. Mia's Group Daycare on Compton Street in the city’s Dixwell neighborhood.

Because public art alone does not pay the bills, he works as a school bus driver for the Durham School District. He said that the schedule—work in the mornings and the mid-afternoons—affords him time to paint. 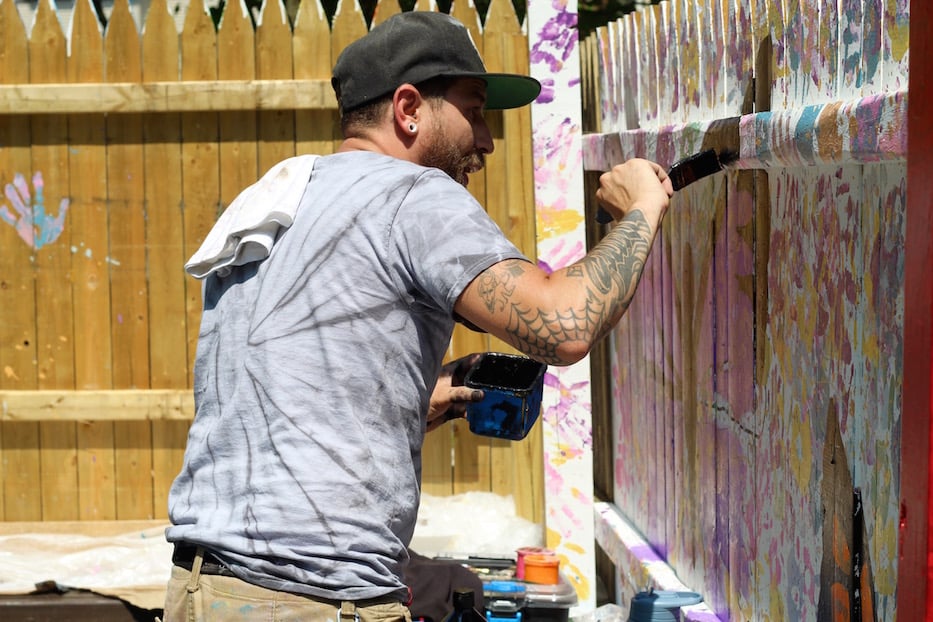 At the daycare, Perez transformed a blank fence into a box of bright, sharp crayons, decorated with a flood of colors and the words “Be Kind” in big, blocky letters that passers-by can see from across the street. In the building’s backyard, he worked with the daycare’s kids to paint several larger-than-life butterflies taking to the air, their wings delicate against a sky of multicolored handprints. His signature, a black gecko, represents his niece. One also crawls up his leg in tattoo form.

Franklin, who met the artist through one of her employees, said she is thrilled to have the mural brightening up the yard. Her employee learned of his work through Perez' eldest son, with whom she goes to school.

Now, he is hoping to expand his work in Fair Haven, at the underpass at Ferry Street and Middletown Avenue. Currently, the artist is working with Eleazar Lanzot, a communications specialist for New Haven Rising who lives in the neighborhood. Lanzot said the project is still in its very early stages, and is looking for funding. He and Perez met with members of the Nu Spiral Collective last month and are planning to collect more community input before painting.

In a meeting with members of the Fair Haven Community Management Team last month, Perez said that he is excited to create in Fair Haven because the community has nurtured him for years. While “I feel like I got roots anywhere in New Haven,” the neighborhood was one of his first artistic homes. Years ago, he and friends used to practice writing their names on a wall on Lewis Street. They stopped when a mural of children playing appeared there.

He said he believes the same thing will happen as public art replaces graffiti on the neighborhood’s large walls and underpasses. To business owners who are still skeptical, he often points to the Lewis Street mural as an example.

Lee Cruz, who currently co-chairs the Fair Haven Community Management Team, said he is excited for the possibility of new large-scale public art projects in the neighborhood. There is currently only a trickle of public art in the neighborhood, from storm drain art on River Street to a recent effort to spread the word around vaccination with vinyl installations on bus stops.

"He [Perez] is a great example for our kids, someone who grew up in our neighborhood and started constructing stuff like this," Cruz said in a recent phone call. "He's turned a gift that he's had for a very long time into a form of public expression and into a business. What else could you hope for for the neighborhood?"