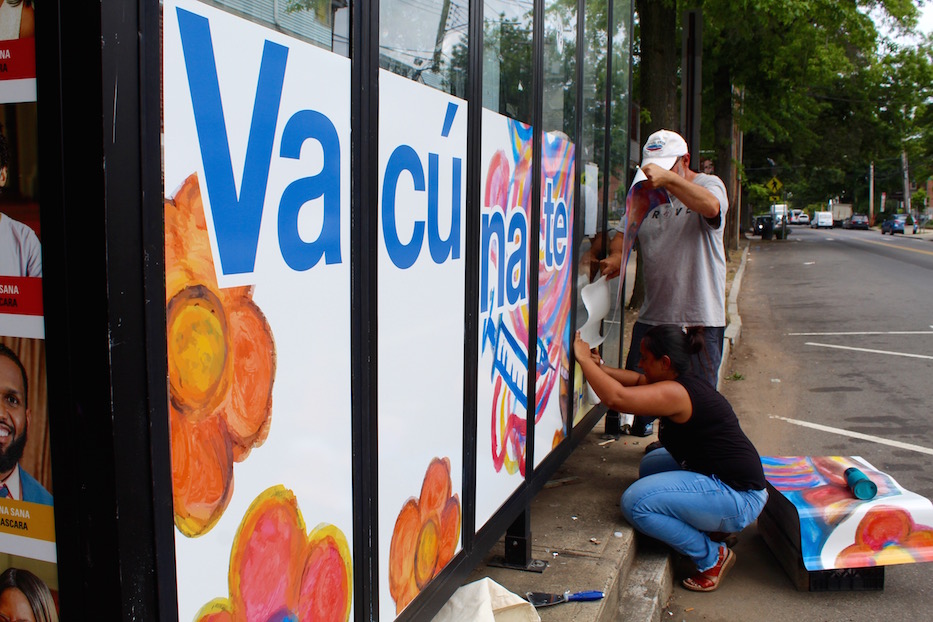 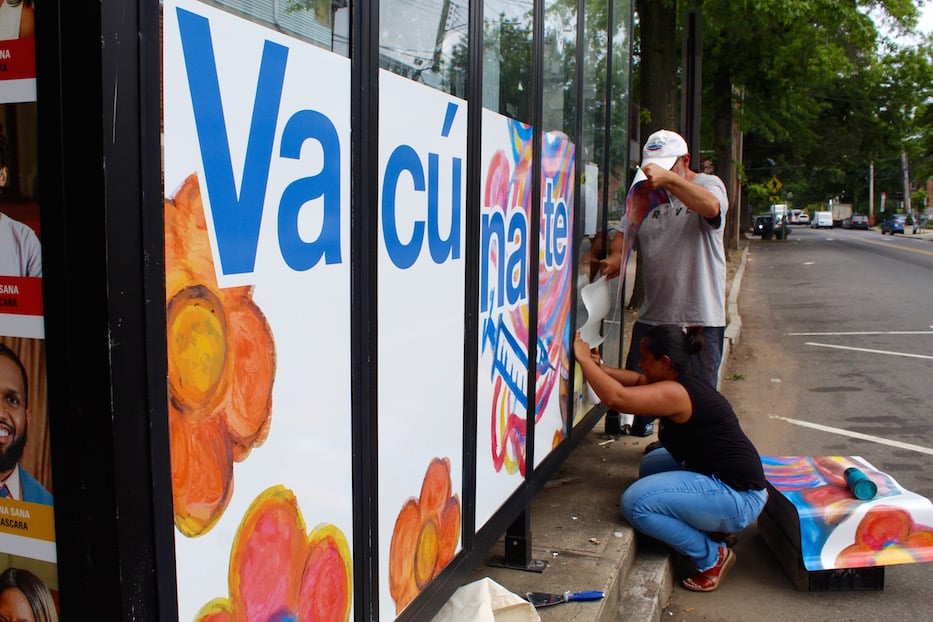 Maria Osorio Maya crouched beside the bus stop, pressing her weight into it as she rolled out the sheets of white, blue and orange vinyl. Her hands became a ballet, working to smooth out any bubbles and keep the edges sharp and straight. Just feet away, Grand Avenue buzzed and honked with the clamor of a weekday afternoon.

Every ten minutes, the 212 bus rolled by to say hello. As passengers got on and hopped off, a new banner greeted them with a steady, persistent reminder: “Vacùnate/Fair Haven.”

Osoria Maya is part of a campaign to quash misinformation and get Fair Haven vaccinated through public art. This summer, she is working with New Haven artist Anthony Barroso, Fair Havener Lee Cruz, members of the Chatham Square Neighborhood Association, and the Community Alliance for Research and Engagement (CARE) to add messages to bus stops across the neighborhood.

“I think vaccination is going to help our community be safer, and come out of this pandemic in some ways,” Barroso said in a phone call last Thursday evening. “It’s really been an honor to give back through this campaign.” 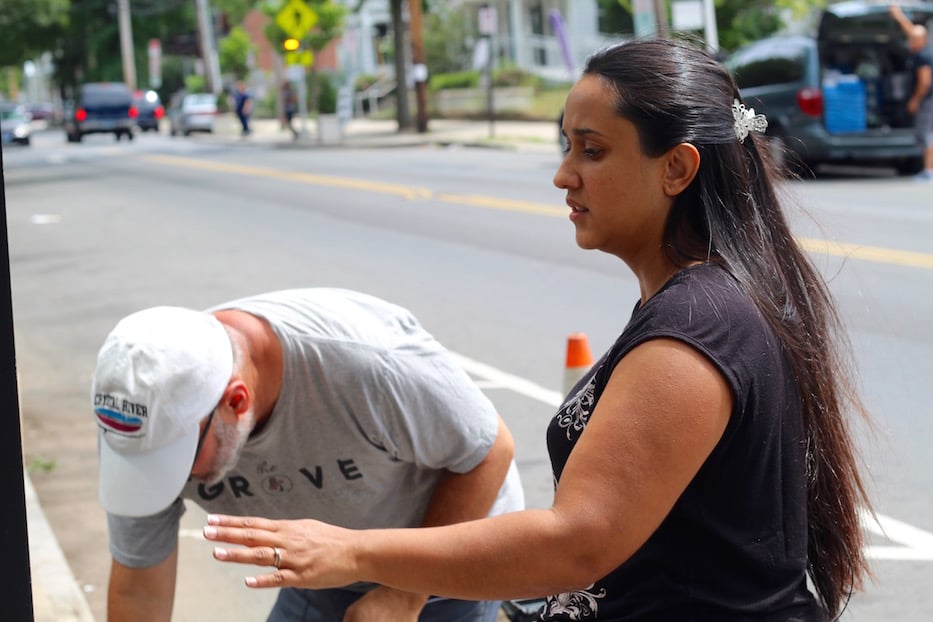 Maria Osorio Maya, who is a teacher at the newly-named Family Academy of Multilingual Exploration (FAME) with Lee Cruz.

Last week, the group installed its second design at the covered bus stop at James Street and Grand Avenue.  Another exists at Grand and Blatchley Avenues, at a bus stop beside Family Academy of Multilingual Exploration (FAME) where Osorio Maya works as an art teacher. Cruz said that more will be going in at Grand and Ferry Street and at Grand and Lloyd Street in the next few months. This week, they may replace the white vinyl and Grand and James with a transparent vinyl.

The campaign began several months ago, after Cruz started thinking about ways to help spread the word around vaccination. Fair Haven is home to over 15,000 residents, over 80 percent of whom are people of color. During the pandemic, Fair Haveners kept the city running as some of its essential workers; some died after contracting the virus in their workplaces. The new vinyl sits across from the Fair Haven Community Health Center, where a grassroots effort to “Vaccinate Fair Haven” unfolded earlier this year. 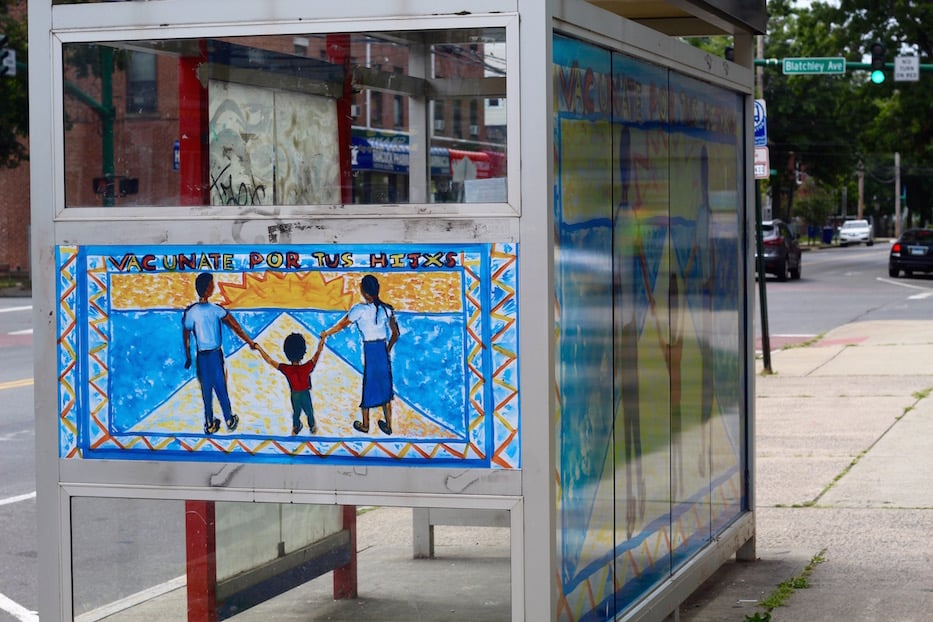 The first image, which sits at Grand and Blatchley Avenues.

He connected with Barroso through friend and organizer Fatima Rojas, with whom Barroso volunteers as a member of the Semilla Collective. For the artist, a grassroots activist and Ecuadorian immigrant who has lived in New Haven since he was eight years old, it felt like a natural extension of the mutual aid work he had been doing to distribute food and direct financial assistance to hundreds of families in the neighborhood.

In the past years, he has also helped design graphics for Semilla and CT Students for a Dream, including a campaign to extend the state’s HUSKY program to undocumented immigrants.

In the spring, Semilla also started outreach focused on signing Fair Haveners up for vaccine appointments. Barroso has heard a lot of uncertainty from neighborhood residents, he said—particularly from those who are undocumented or may have family members who are undocumented. He also works in the healthcare field: he is training to become a radiation therapist at Gateway Community College. So when Cruz approached him, he jumped onboard.

“I've always used it [art] as a form of expression, for letting emotions out,” he said. When he was designing the woman, he looked to Fair Haven residents he’d met while volunteering for Semilla. “I just wanted to show their strength and resilience.” 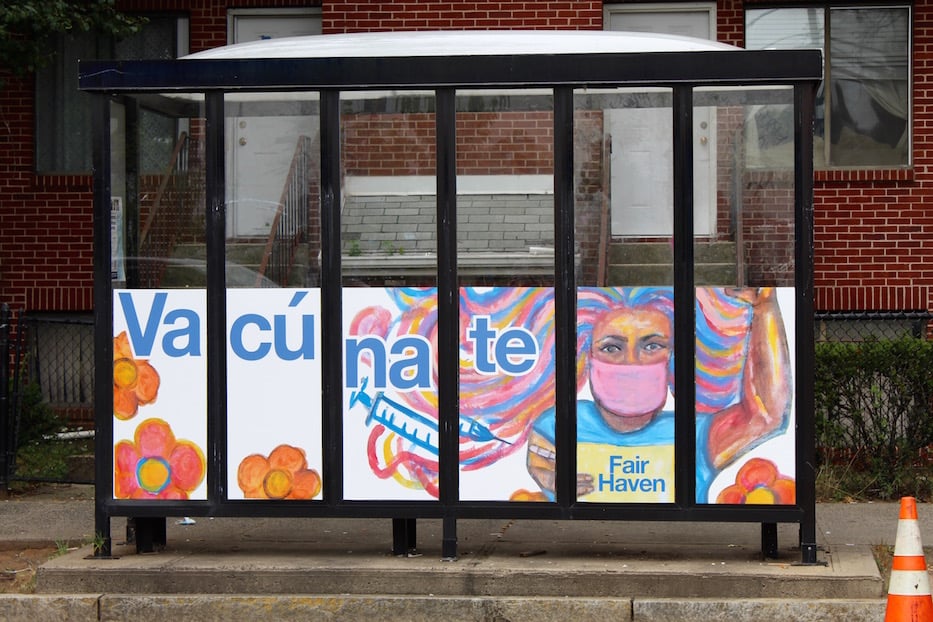 The original vinyl will be replaced with a transparent design this month.

The work feels triumphant, like Barroso knows the neighborhood will get through this and is rooting it on. In addition to the clear markers of Covid-19 safety—the woman’s broad, thick mask, fresh band aid and the nearby, retreating needle—there are orange and pink flowers that bounce across the banner. Her hair, rendered in a spray of sunset-colored bands, gives the installation a sense of motion. A banner from URU The Right to Be Inc. also urging Covid-19 safety sits beside it on the bus stop.

After painting the images by hand, Barroso worked with New Haven artist and designer Ricardo Gutiérrez to digitize the works and fit them to the bus stops. He praised Gutiérrez, who he met through his work as a bartender at Partners Cafe downtown, as especially instrumental in making the project work. Cruz then worked with New Havener Sean Reeves, who owns a printing business on Dixwell Avenue, to get the digitized pieces on vinyl.

Last Tuesday, Cruz and Osorio Maya bustled to get the work onto the bus stop. Surrounded by traffic cones, the two rolled out the design, sliced into six pieces for the segmented window panes. A graphic designer by trade, Osorio Maya arrived in New Haven five years ago from Colombia and has since made the city her home. In addition to her work as the project's installer, she is an art teacher at Family Academy of Multilingual Exploration (FAME). 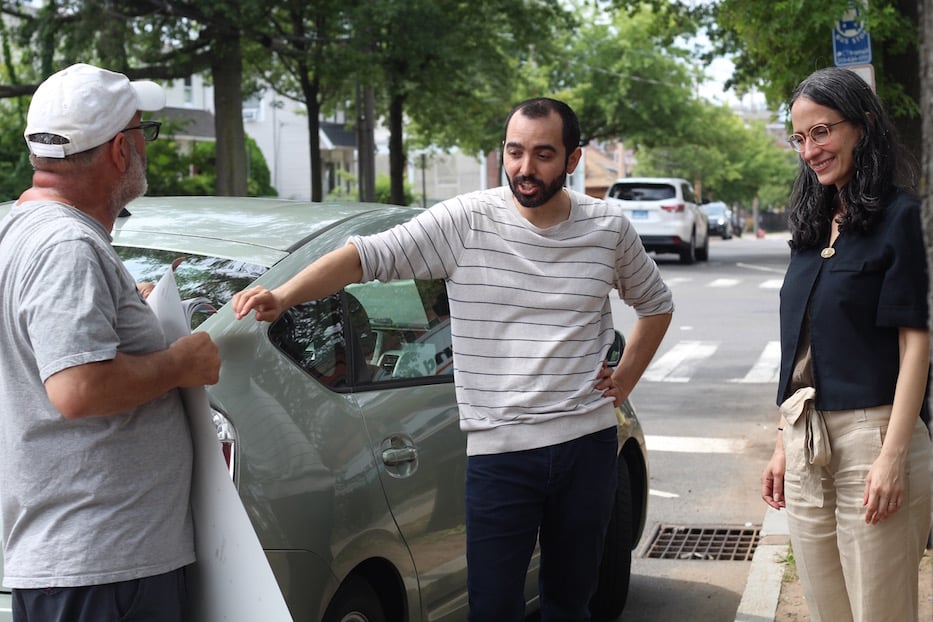 JUNTA Executive Director Bruni Pizarro (pictured at right) was so intrigued that she and her husband Daniel stopped to chat with Cruz about the project.

Originally, she said, she didn’t intend to stay—most of her family members still live in Colombia. Then she met her husband, Beecher School music teacher Michael Piraneo. The two had a son. In the midst of the pandemic, a substitute position teaching gym at FAME turned into a bilingual job teaching art part-time. She only realized that she was teaching Cruz’ younger son, Mateo, after the two met through a fellow teacher.

As they worked, CARE Communications Coordinator Jackson Higginbottom arrived to watch the installation. A graduate of the Yale School of Public Health, Higginbottom has been working closely with CARE to get the word out about the vaccine and fight a growing wave of misinformation.  When one of the organization's outreach workers saw the first design up the street, she thought that it could be a perfect project for CARE to help with.

Raised in a small town outside Oklahoma City, Higginbottom is no stranger to misinformation: he’s found himself talking to vaccine holdouts, including in his own family. Currently, he said he sees “three main groups” of people opposed to the vaccine.

There are the resolute anti-vaxxers, a “wait-to-see” group, and then a third that has fallen prey to misinformation, he said. To combat it, CARE has set up a website in multiple languages (“Translated by actual people,” Higginbottom emphasized), as well as a “rumor log” where community partners can write in with what they’re hearing. 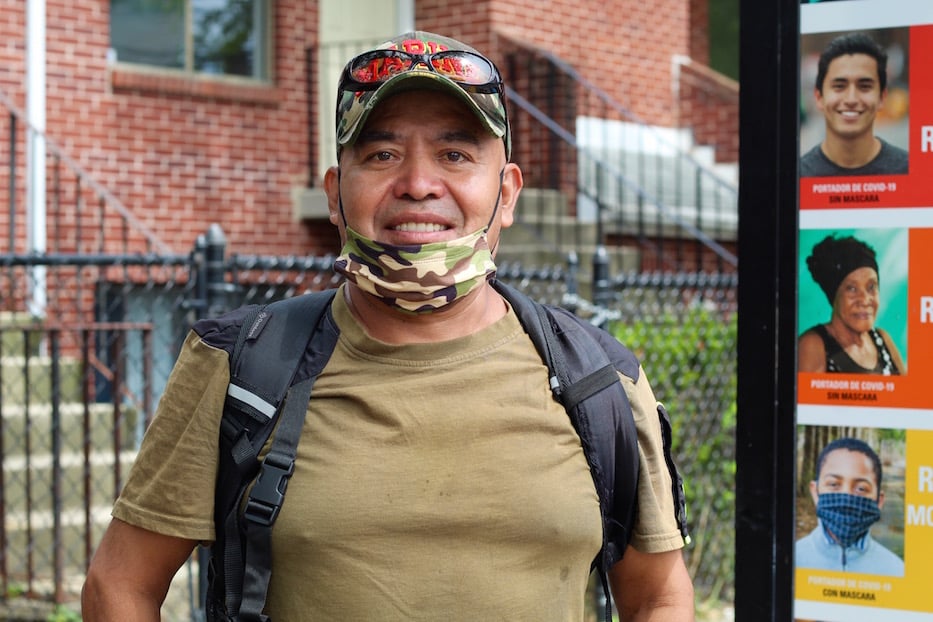 The log has been successful: Higginbottom said it received 25 submissions in the first week. Some of the most frequent concerns have been around pregnancy and fertility.

"We are seeing Covid-19 health disparities among Black, Latinx, and Hispanic residents, and a big factor contributing to these disparities is the lack of access to healthcare," he said. "People who don't have consistent access to health care are less likely to have a trusted medical provider to answer their questions about the vaccine. This is why trusted community members need to become trusted messengers and encourage others to get vaccinated."

Tuesday, passers-by stopped to watch the installation as they walked by and waited for the bus on Grand Avenue. Gustavo Lopez-Osorio, who lives in East Rock, was returning home from visiting his daughter in Fair Haven when he stopped to take a look.

As a cook at Te Amo Tequila downtown, he got the vaccine early on in its rollout. He said he’s excited for any effort that seeks to do the same for fellow community members.

“I like the art,” he said. “This shows respect for the neighborhood.” 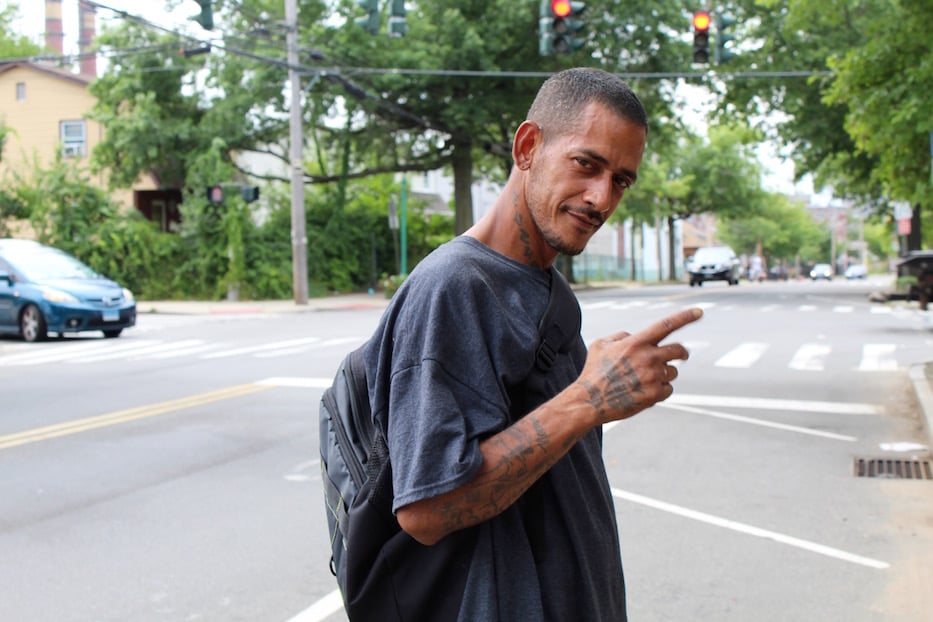 “It reminds you that the community’s safety comes first."

Another resident, who agreed to be photographed but would not give his name, said he found the work both “beautiful” and compelling for those who are not yet vaccinated—including himself.

For months, he has held out on the vaccine because “my antivirals in my body, they fight everything.” Looking at the piece inched him that much closer to getting the shot.

“It reminds you that the community’s safety comes first,” he said.

The Chatham Square Neighborhood Association is still raising money for vinyl installations around the neighborhood, which range from $250-$400 per bus shelter. For directions on how to donate, email ChathamSquareNeighborhood@gmail.com.