A Poet Turns To “Flossing” Once Again 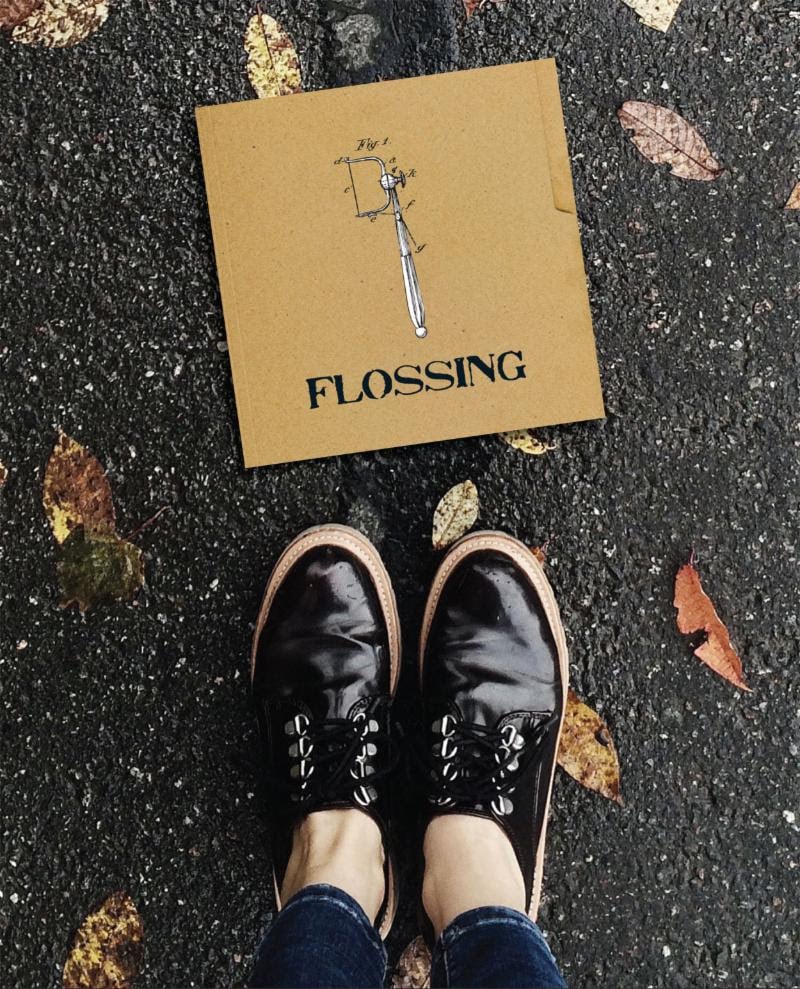 Jen Payne grew up learning about the world around her. She never knew that it would translate into a career where literature dovetailed with conservation.

Payne, who operates Three Chairs Publishing, is the author of Evidence of Flossing: What We Leave Behind, a book of poems and accompanying photographs that document dental flossers left in the Connecticut woods, on sidewalks, and around the backyards and streets that Payne calls home.

After releasing the first volume of poems in 2017, she has returned this year with a book simply titled Flossing with a selection of the 150 photographs she has captured of "flossers in the wild." Fifty percent of all proceeds from the book will go toward A Place Called Hope, a rehabilitation center for birds of prey in Killingworth.

“These artistic but ironic images ask the viewer to consider how our actions influence the world around us,” she writes in a release.

For Payne, that curiosity has been decades in the making. She learned to observe the world around her from her father, who had a natural curiosity in the world around him. When the writer was four years old, her dad took her sledding down a hill on a golf course. On her way down, she crashed into a tree, the sled hitting her in the head.

It was a bad crash. She needed stitches. Sometime later, Payne’s dad drove her back to the golf course, pointed to the tree and informed her that they were going back up to conquer the mound. Payne said she later understood that his message to her was about perseverance.

“When you fall off the course you get back on. That’s what I do. Life is always challenging and there are big horses and little horses. I have known both.”

One of those “big horses” was the death of her father. Payne said her dad died very suddenly, when he was 52 and she was nearing her 30th birthday. She had just started Words by Jen and was trying to find her way with the business. And then he was gone.

“My dad was a huge influence for me he was a hard worker and loved life and loved being interested in the world around him,” she recalled. “It was a big game changer, and made me look at the world in a different way. Made me braver, I think.”

She said she when people are young, they don’t understand how short life is—that it takes something mammoth and sometimes tragic to make one understand how important it is to use the time that they’ve got. With her time, she focuses on what drives her: writing and nature.

That’s not always an easy balance, she said. As the business owner of Words By Jen , a graphic design and creative services company she has run for 26 years, Payne said it can hard to remember to get outside. But as a naturalist and conservationist, she enjoys going out on walks, and said that being out in nature brings her peace.

“Our work culture is very demanding, our technology keeps people distracted,” she said. “Those are two big things. Some friends are surprised I go walking. They're afraid to go out into the woods … maybe it’s fear, but mostly I think it’s time.”

Those walks have served as inspiration for some of her most recent publications, including the choice to donate proceeds from Flossing to A Place Called Hope. With her latest book, she said she hopes people will see the flossers as a symbol of a larger fight for the environment.

Payne said a reason she thinks many people dispose of their waste in this way is because they simply do not have respect for the environment. That view has been inspired in part by her work with the Branford Land Trust, of which she has been a member for nearly three decades.

Now, she believes that throwing a small item, even one that may seem insignificant like a flosser, has a ripple effect. One action can cause thousands of other reactions, including the fatal effects of garbage and particularly plastic to mammals, birds and marine wildlife.

“It’s not us against nature,” she said. “We are a part of nature. Everything is connected to each other.”

Melanie Espinal contributed reporting. This piece comes to the Arts Paper through the second annual Youth Arts Journalism Initiative (YAJI), a program of the Arts Council of Greater New Haven and the New Haven Free Public Library. Over eight weeks this spring, ten New Haven Public Schools (NHPS) students work with Arts Paper Editor Lucy Gellman and YAJI Program Assistant Melanie Espinal to produce four articles, for each of which they are compensated. Read more about the program here or by checking out the "YAJI" tag.