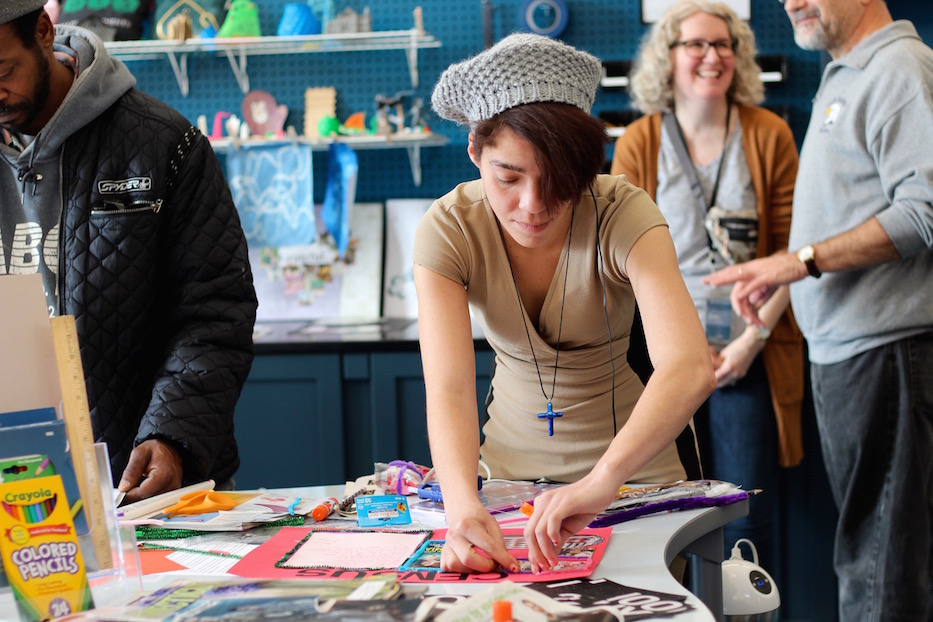 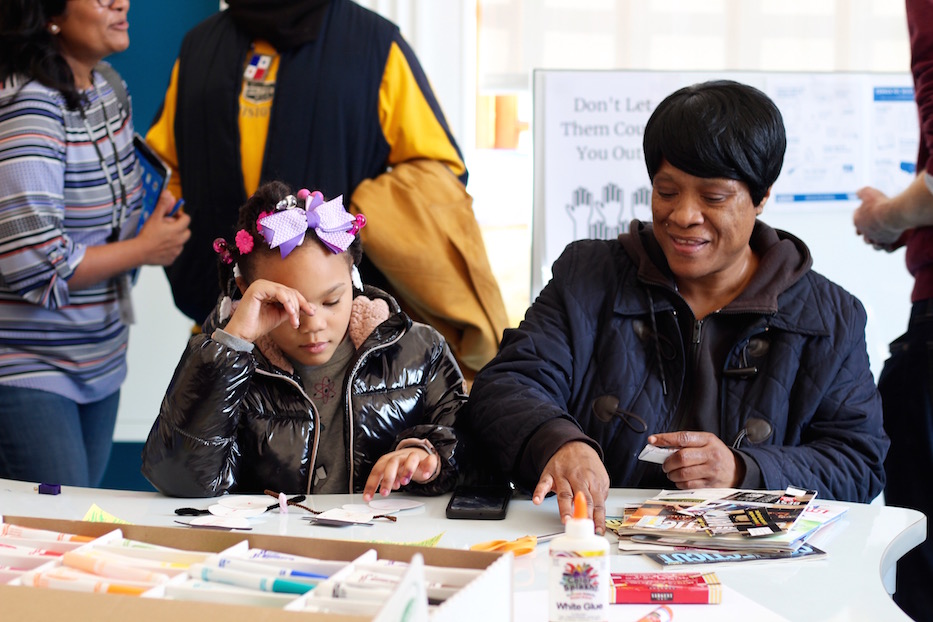 Crystal Battle wants to make sure that no one counts her granddaughter out of the 2020 Census. This weekend, she got an unexpected assist from construction paper, colored pencils, glittering pipe cleaners and her local library.

Saturday, Battle was one of the first to join the New Haven Free Public Library’s (NHFPL) Census 2020 Poster Contest, an initiative of the NHFPL, Community Foundation for Greater New Haven, and U.S. Census Bureau to spread the word about the 2020 Census. The theme for the contest, which runs through Feb. 2 at all five branches, is “Don’t Let Them Count You Out.”

The contest, based out of the downtown branch of the NHFPL, comes just days after the U.S. Census Bureau announced that it will be raising wages for census enumerators in Hartford and New Haven from $21 per hour to $23.50 per hour.

For close to a year, the library has been working closely with the City of New Haven and the Community Foundation on the New Haven Complete Count initiative, through which it has hosted census job fairs, information sessions, and monthly Complete Count meetings. Saturday, City Librarian John Jessen called the contest another community-focused way to get the word out—especially after 40,000 New Haveners were missing from the 2010 census.

“Just like the fire department is important for putting out fires, the police are important or security, you see the essentialness of the library in this situation,” he said. “We’re bringing the community together to have a good time, to meet each other, to connect, and to learn about the census. We’re very proud and excited to be a major partner on this.”

“This is a great opportunity for people looking for work in the city of New Haven who are looking for work to come and help get everybody counted,” he added. “We leave roughly $2,800 on the table for each person that is not counted.”

Currently, the NHFPL is training all of its librarians and staff to teach patrons about the census, which includes helping patrons apply for census enumerator jobs in the area. In addition to English and Spanish, the library will be offering educational materials in at least 15 different languages, including Pashto, Dari, and Arabic. All five branches are participating in the effort.

Around Jessen, attendees dug into their work. At the far end of one table, Battle and her granddaughter Ja'mye Lecky-Hutchinson worked on a rendering of Ja'mye’s family home, complete with tall green grass, blue sky, and her family standing outside. While the two had initially come to the library in search of princess-themed books, they opted to stay for the art.

As Ja'mye fashioned her mom's hair out of pink pipe cleaners, the two chatted about what it means for the city to count every New Havener.

“I think more money should be for poor kids, and for the homeless,” she said as her grandmother explained the census process. 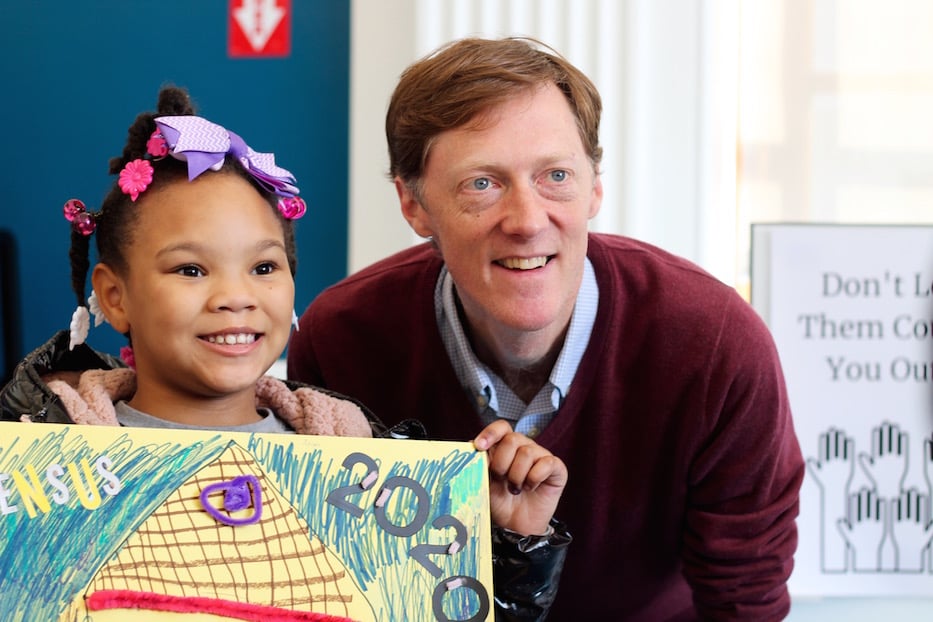 Beside them, eight-year-old Nathaniel Jordan Roberts and his dad Donovan Roberts worked on an image of the globe, mapped out over sheets of red, white, and blue construction paper. Born and raised in New Haven, the senior Roberts is now a juvenile detention officer in Bridgeport, where he commutes for work each day. He said that he hopes all residents are counted so that more money can go toward youth in the city.

As he helped Nathaniel cut out green continents and blue bodies of water, the two talked about what exactly counting each resident meant.

“How do you think that a person would feel, if they didn’t get counted?” he asked. Nathaniel paused for a moment, taking in the shape of the world that was forming before him.

That feeling also rang true for Jessica Lopez, a server at Sunrise Cafe in Wooster Square who moved to New Haven several years ago with her kids in search of a safer family life. In her work, she said, she sees over 200 people each day who are struggling with food insecurity—200 people who need to be counted, whether or not they are housing secure.

On a piece of construction paper, she assembled magazine clippings, original poetry, pipe cleaner frames, and big block letters announcing “Census: Time To Shine.” She said she was particularly proud of a poem titled "Don't Let Them Count You Out" that she had written for the contest.

“These are meant to be images that people can identify and relate to,” she said. “I honestly think this is a great thing. It’s a way to bring the community together.”

Those that came with job application questions got a hand from Mamda Agrewal, a census recruiting assistant who first heard about work with the U.S. Census Bureau on a visit to Stetson Library with her kids. She likes the work because it is relatively flexible and comes with a strong “civic engagement aspect,” she said. Already, she added, she has been surprised by the amount of need that she has heard going door-to-door with news about census jobs in Dixwell, where she and her family also live.

On a brief stop at the event, Mayor Justin Elicker praised the library for its ongoing efforts. He said that he anticipates a challenge in making sure all residents, regardless of documentation status, are counted in an age of increased sweeps and unexpected appearances from Immigrations and Customs Enforcement officials.

“New Haven is a place where everyone counts in everything that we do,” he said. “No matter what your background is, where you come from, what you look like, what economic status, what preferences you have in life, you count. And what’s important is that we make sure that the census and the federal government know that everyone counts in New Haven.”

“Because of the aggressiveness of ICE, particularly in recent months, many people are afraid of representatives that look official,” he continued. “I’m excited that our team has come up with such a creative outreach effort that involves young people, that involves art, that accomplishes a goal that not only underscores the ethic of New Haven, but also helps make sure that we get the resources that we deserve.”

The Census 2020 poster contest is open to entrants over the age of 20 through Feb. 2. Workshops will be held at the main Ives branch of the New Haven Free Public Library on Jan. 14 and 15. More information on those sessions and how to submit a poster is available here. More information on census job fairs at the New Haven Free Public Library, visit its website.