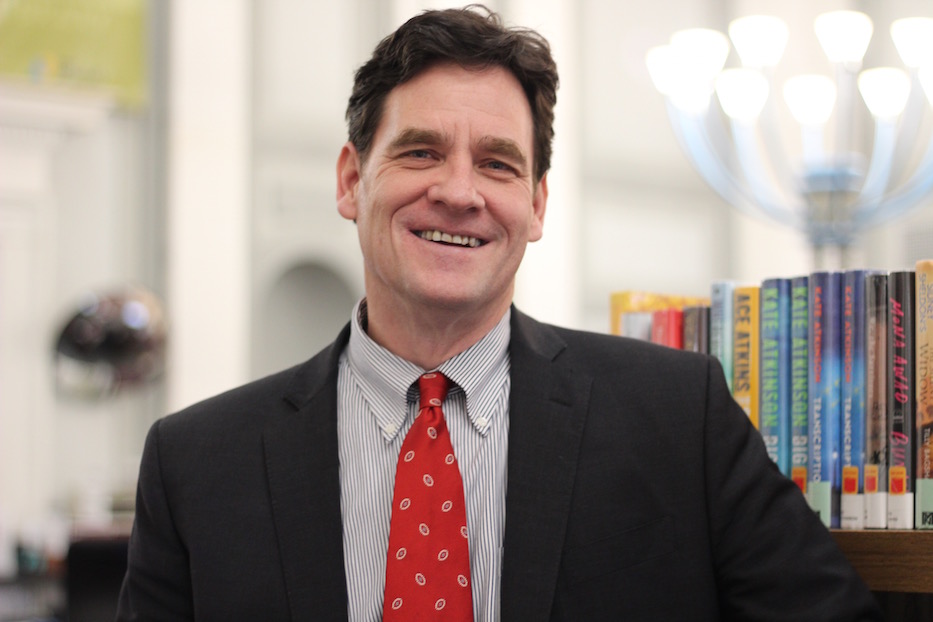 A crusader for public access and champion of city residents has been named New Haven’s next City Librarian—this time from within the library itself.

Monday, Mayor Toni Harp and the New Haven Free Public Library’s Board of Directors announced the appointment of John Jessen as the New Haven’s ninth city librarian. He takes over for City Librarian Martha Brogan, who retired at the end of October. Monday marked his first day on the job.

“It gives me great pleasure to know NHFPL patrons will be the beneficiaries of continuity in library operations and services – that John Jessen will advance the momentum that has characterized the library system’s administration these past many years,” Harp said in a press release Monday. “New Haven’s public library system has seamlessly adapted to the technology required of 21st century libraries and the evolving role they now play in the lives of city residents.”

For the past two years, Jessen has served as the library’s deputy director and most recently acting director after Brogan’s retirement. Prior to that time, he served as branch manager at the library’s Courtland Seymour Wilson Branch from 2012 to 2017 (lifelong New Havener Luis Chavez-Brumell now holds that position). In his life outside the library, he has also been a volunteer for LEAP (Leadership, Athletics, & Education in Partnership) and New Haven Reads, and served on the board of directors for Common Ground High School. He lives with his wife and kids in Westville.

“It’s an incredible honor to be named City Librarian,” he said in Monday’s press release. “I wake up every day knowing I have this amazing staff committed to welcoming and assisting the enormously diverse people of New Haven as well as those who visit our city.”

“I’m so excited to lead the New Haven Free Public Library as it grows into an even more central hub of culture and community,” he added. “A place where people naturally gather to be part of something bigger, and where we dissolve the boundaries between and within various institutions and communities.”

Born and raised in rural, small-town Iowa, Jessen arrived in New Haven in 2003, after studies in political science at St. John’s University in Minnesota and publishing work in New York City. As he got to know the city, he co-founded Bookrounds, described in an archived library newsletter as “a hybrid online/in person book club that met in various restaurants and coffee shops throughout New Haven which, at its peak, boasted over 2,000 members.”

In 2006, he began his graduate work in library science at Southern Connecticut State University (SCSU), earning his degree in 2008. By then, he was already working as an outreach specialist for the NHFPL, a role in which he juggled and expanded community partnerships. His appointment at the Wilson Branch followed in 2012.

“I became a librarian after I had an ah-ha moment that I could be ‘selling’ books for free,” he explained in a 2018 interview with library staff. “As I started working in the library, I loved working in a place where I could be of service to others and share both my love of reading and search for knowledge. I am honored to be part of a place with a staff often referred to as family. The traditional role of the librarian is changing and I am excited for this future.”

By the time Jessen became deputy director in 2017, he was thinking about how libraries could better serve their patrons, particularly in terms of public access and social services. Under Brogan’s leadership, the library expanded its footprint as a free and open resource, becoming a service hub and warming and cooling center amidst increased housing insecurity in the city. It offers free computer classes, tax filing services, and English as a Second Language (ESL) classes. There are free art programs, readings, movies and book clubs for adults and kids.

In 2017, Jessen began subscribing to a weekly newsletter from author Ryan Dowd that included tips on working with homeless patrons to give them the access and dignity to which they are entitled. The tips are inspired by Dowd’s The Librarian's Guide to Homelessness: An Empathy-Driven Approach to Solving Problems, Preventing Conflict, and Serving Everyone. He sends them around to staff each week (in an interview earlier this year, he said the book has become something of a staff favorite).

“It is important that we have a City Librarian who can lead the organization in a way that will continue to build on a history of accomplishments and dedicated service to our diverse community,” said Shana Schneider, board president for the NHFPL, in a press release Monday morning. “We see our designation as an award winner of the 2019 National Medal for Museum and Library Service as a springboard for John and the NHFPL team to keep the Library’s evolution going into this new decade and beyond.”

It comes at a moment of change for both the library and the city. Since November, members of Mayor-elect Justin Elicker’s transition team have been collecting suggestions for the NHFPL in an “Arts, Culture and Libraries” subgroup that is spearheaded by by Westville Village Renaissance Alliance Director Lizzy Donius and immigrant rights advocate and cultural cheerleader Kica Matos.

While the team’s official report has yet to be issued, preliminary suggestions include abolishing late fees, raising salaries, moving the Division of Arts, Culture & Tourism to the library and expanding branch hours. Jessen contributed at one of those meetings, noting the strong tie arts and culture have to a city's economic development.

At a second public input meeting, NHFPL Board Member Andrew Giering pushed especially hard for more competitive salaries for library staff, because New Haven is currently behind statewide trends. In the current city budget, the city librarian’s salary is $110,725—a number that is lower than its counterparts in Hartford ($164,999), Bridgeport ($118,320 for the current fiscal year), Middletown ($127,275) and Stamford ($140,000).