A Mural Blooms At Wilson 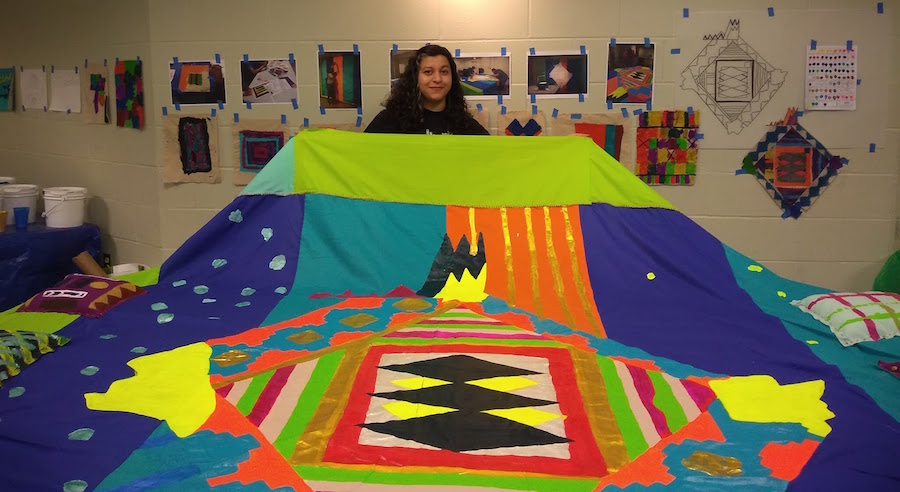 In the community room at the Wilson Branch Library, something magical was happening with paint and fabric. On one side of the room, MFA student Victoria Martinez held up a huge length of brightly painted cloth. Down the table, a few painters put on some finishing touches. Heads turned. Conversations quieted. International influences criss-crossed the piece: Peruvian on one side and Mexican on another, African down the middle. All brought into being by the New Haven community.

Saturday afternoon, the three styles came together as part of a Community Art Show at the Wilson Branch Library, nestled on Washington Avenue in New Haven’s Hill neighborhood. A collaboration between the New Haven Free Public Library, Yale Center for British Art (YCBA), and first-year Yale MFA candidate Martinez, the project brought out New Haveners young and old alike for the completion of a mural, which will now hang in the atrium outside of the library's family place room.

“It’s such a beautiful piece of art,” Martinez said. “And most of this was done in a day.”

The mural project began several months ago, with a discussion between Jennifer Reynolds-Kaye, curator of education and academic outreach at the YCBA, and Wilson Branch Manager Luis Chavez-Brumell. Last year, the two connected at Wilson when Chavez-Brumell was still managing the library’s Young Minds and Family Learning Department.

Then they reconnected at City-Wide Open Studios, when Reynolds-Kaye mentioned that she’d been talking with Martinez about the possibility of a community art project. After the three sat down to discuss it, Martinez embarked on an independent study course at the library as part of her first-year MFA work at the Yale School of Art.

From March through May of this year, she taught weekly after-school art classes to kids and young adults interested in art—whether they wanted to drop in for a day, or come each week. The YCBA provided materials and snacks for the program, both of which Chavez-Brumell praised as "instrumental in the project's success!!" in an email Monday morning.

For Martinez, the project’s mission was deeply personal. She grew up in the 1990s, in a working class neighborhood in Chicago called Pilsen, where there weren’t a lot of art programs for youth. As a kid, she saw murals and graffiti each day close to where she lived. By the time she was a teenager, a budding interest in art pushed her to volunteer at the National Museum of Mexican Art.

It catapulted her into a career dedicated to arts learning. For the past 10 years, she has been a teaching artist, mostly in Chicago. While teaching at both Mexican and African art schools, she recalled experiencing segregation between schools, neighborhoods, and people. 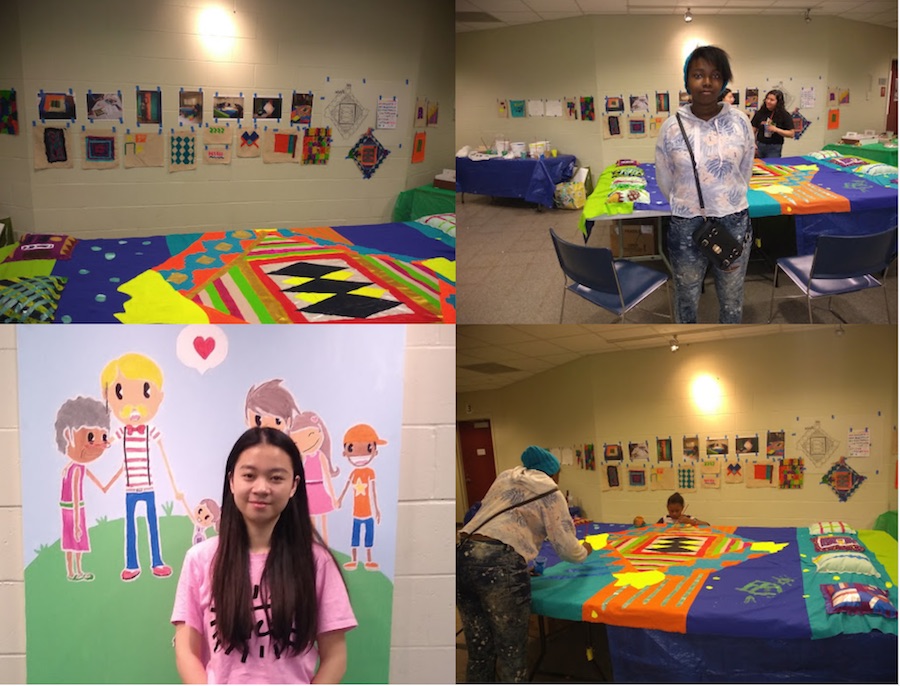 “The subjects and what’s available to students doesn’t connect to what they relate to,” she said.

At Wilson, she said she wanted to prove that textiles can connect different cultures. She did research on Mexican and Peruvian textiles, as well as quilts produced by Black women at Gee’s Bend in Alabama. Based in rural Alabama, Gee’s Bend is a group of Black women whose designs relate to family and architecture from their cities. Some of the quilts date back to the beginning of the twentieth century.

“Instead of continuing the cycle of segregation, we can take the time to study textiles and learn how we all culturally connect,” Martinez said.

Once the program began, Martinez said the process took time. Students who joined the program after school drew individual pictures, and eventually painted them onto a display. Most of the designs were then printed out in color and then eventually transferred in bright paint onto the display.

Saturday, several community members attended the show to both complete and admire the finished product. Nyla Jones, who came out several times to work on the piece, said that the project gave her an opportunity to express her feelings in a communal and public setting. She has shown her art to staff around the library, and said they consider her an artist and have supported her work. She praised staff and Martinez for the new collaboration, adding that she is excited to be part of it.

“Art expresses people’s feelings even though they may not see it,” she said. “When I’m happy or excited or something, I use bright colors. However, when I’m sad or angry, my work doesn’t really seem to be the best that I have done.”

Another member of the group, Susan Chen, had similar views. For her, art means “relaxing and drawing whatever expresses your current feeling,” she said. She was already volunteering at the Wilson Branch Library when she heard about the program, and decided to join it. In her eyes, the program helps bring everyone together to share ideas.

A dad named Yamil Vargas also chimed in as his young daughter worked nearby.

“The program is very helpful for my daughter’s development,” he said, smiling as he watched his daughter paint methodically. “The program helps the youth stay out of trouble and helps the parents with supervising.”

Chavez-Brumell, who became branch manager last year, added that the project fed into his love for storytelling and filmmaking. Before he took on the job as a librarian, he was a production assistant for a documentary on PBS called Fixing the Future Now. At Wilson, he said he loves connecting with the people about the books and movies that he checks out for them. He said he sees the connection that those media have with art.

“Art education or experience helps you personally and professionally,” he said. “For every talent, whether it’s art or something else, everything has transferable skills.”

Art is "increasing our understanding in the world and of ourselves,” he added. “The program creates a space for kids that turns them from consumers to creators.” We are all capable of being artistic.”