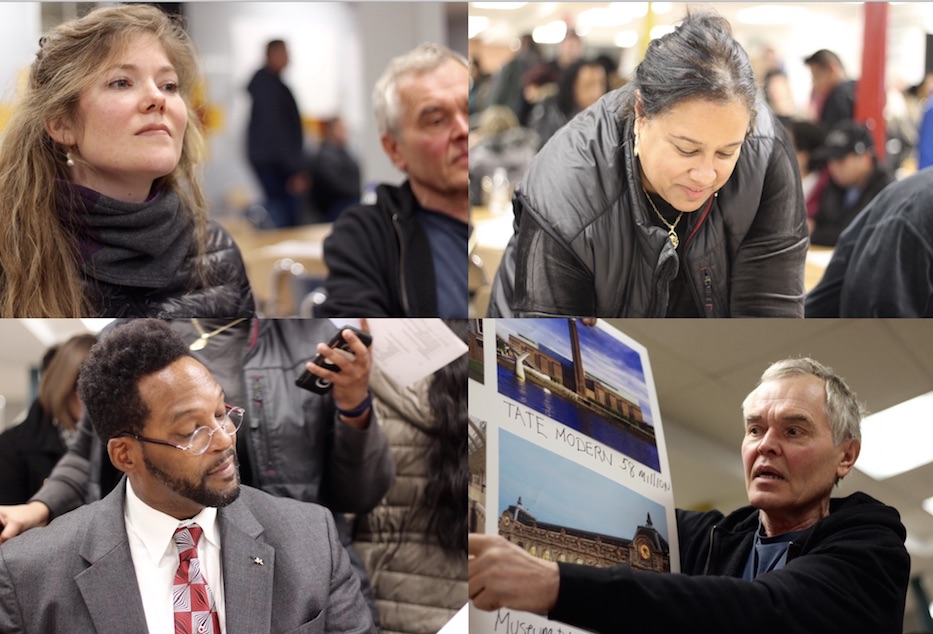 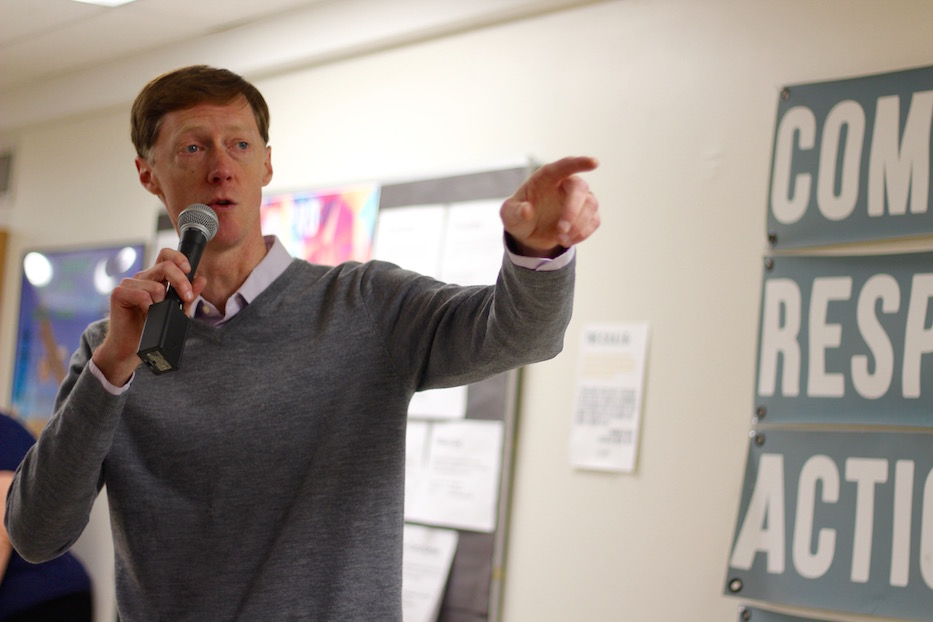 As Mayor-elect Justin Elicker barrels towards his first term in office, members of his transition team have started working toward a comprehensive cultural plan for the City of New Haven. Now, arts advocates are making sure libraries and arts education don’t get left behind.

Sunday afternoon, over a dozen artists, educators, and parents made that their focus at the transition team’s second public input meeting, held at High School in the Community in the city’s Wooster Square neighborhood. Close to 300 New Haveners attended the meeting, which spanned education, economic development, immigration and sanctuary city status, housing, health and human services, city budget, and climate policy in just under two hours.

Facilitated by Kia Levey-Burden and Elizabeth Nearing, the meeting was intended to increase transparency and amplify community input. Elicker’s next public event is a community coffee hour on Dec. 13; he has also released a podcast about the transition process. 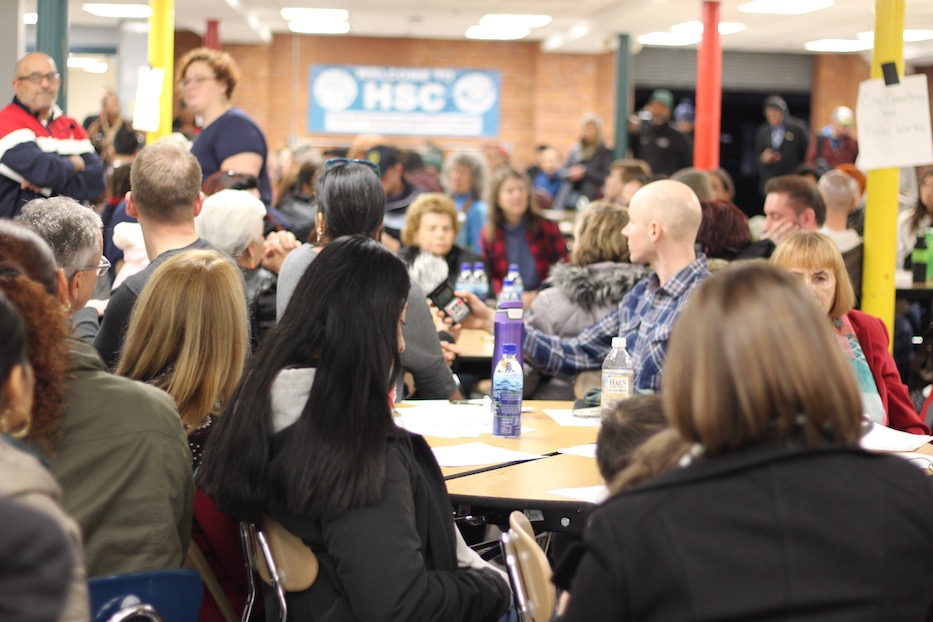 “The goal of this process is that we get input from so many people, as many people as we possibly can from around the community,” Elicker said. “This process is not just about today, but about many, many days in the future … the city’s transitioning all the time, and it’s important that we continue having these types of meetings and other ways that we can all have a contribution to the future of this city.”

Three weeks after the first public input meeting, the transition team has rolled out a list of draft recommendations for the Elicker administration, including 13 concerning arts, culture, and the city's public library system. It is based on public suggestions, survey responses, and an “Arts, Culture and Libraries” subcommittee spearheaded by Westville Village Renaissance Alliance Director Lizzy Donius and immigrant rights advocate and cultural cheerleader Kica Matos.

In a long list divided into the administration’s first 100 days and its first two years, suggestions include drafting an equity framework and citywide cultural plan, relocating the Division of Arts, Culture & Tourism to the main branch of the New Haven Free Public Library (NHFPL), and increasing the city’s investment in both local artists and citywide arts programming.

Recommendations also include integrating the arts more fully into New Haven Public Schools (NHPS) curricula beyond magnet programs at Betsy Ross Arts Magnet School, Cooperative Arts & Humanities High School, and Educational Center for the Arts that already exist. In their plans for the NHFPL, the transition team has suggested ending late fees, allocating one percent of the city’s general fund to libraries (it currently sits at .77 percent), offering more competitive salaries to library staff, and adding Friday hours at the library’s neighborhood branches.

Sunday, two tables of arts advocates put the library center stage for much of their discussion. Andrew Giering, who sits on the NHFPL Board of Directors, noted that he’s especially invested in seeing more competitive salaries for library staff, because New Haven is currently behind statewide trends. In the current city budget, the city librarian’s salary is $110,725—a number that is lower than its counterparts in Hartford ($164,999), Bridgeport ($118,320 for the current fiscal year), Middletown ($127,275) and Stamford ($140,000). Giering said the choice seems intuitive to him, particularly after the library’s receipt of the 2019 National Medal for Museum and Library Service.

NHPS music teacher Jonathan Berryman, who founded and still directs The Heritage Chorale of New Haven, suggested the library could better advertise and expand its cultural spaces. Currently, both the main and satellite branches of the NHFPL have rotating art exhibitions, film screenings, free classes, and live performances through a number of community partnerships. For a city still searching for community spaces, he suggested, it could be a central cultural hub.

“There are not enough opportunities for communities and neighborhoods to come together,” he said. “If I go to Fair Haven I see my Hispanic students. If I go to Dixwell I see my Black students. We know that the arts are a bridge. We could be doing more around it.” 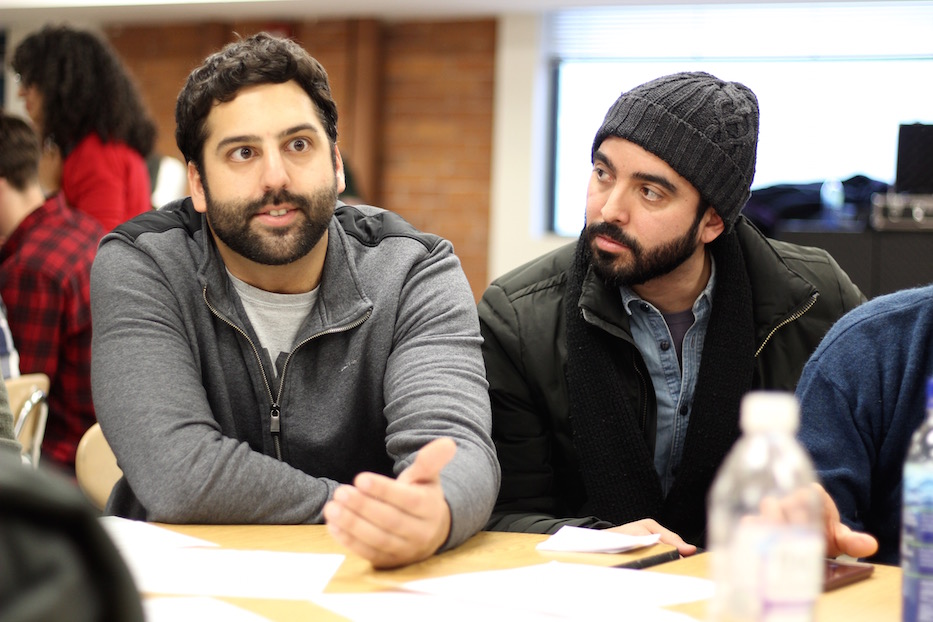 Camille Ansley, a mom and Cedar Hill advocate who has struggled to keep a little free library running in her neighborhood, added that parents don’t always know what’s available to them. Across the table, a fellow mom piped up, advocating for increased hours because she can’t bring her child to library activities that start in the mid-afternoon—and doesn’t know a lot of parents who can.

Attendees also called for using the arts as a pathway to economic development, for STEAM education, and for increased collaboration among artists and city departments. In response to a proposed equity framework, artist Daniel Pizarro emphasized the importance of prioritizing and deferring to artists of color, especially if projects take place in their neighborhoods.

Elizabeth Bickley, manager of public space planning and development for Town Green District, noted that artists are interested in transforming the vacant lots, overpasses, and underpasses that populate the city, but often get tied up in municipal red tape (sometimes it is statewide red tape, depending on whether a road is controlled by the Connecticut Department of Transportation).

Steve Raider-Ginsburg, who co-founded HartBeat Ensemble and now serves as director of the Carol Autorino Center for the Arts and Humanities at the University of Saint Joseph, pointed to Hartford as a possible template. While he was still living there, he explained, he saw frequent collaboration between the parks and recreation department and artists and arts organizations in the city.

As time wound down, Nearing called the room back to attention.

“The last meeting was one beginning,” she said. “This is another.”

The following are a number of draft recommendations for the mayoral transition distributed at the Dec. 8 transition team public input meeting. The subcommittee overseeing Arts, Culture and Libraries is headed by Lizzy Donius and Kica Matos. Nothing has been finalized.