Elicker Swings Local For The Arts 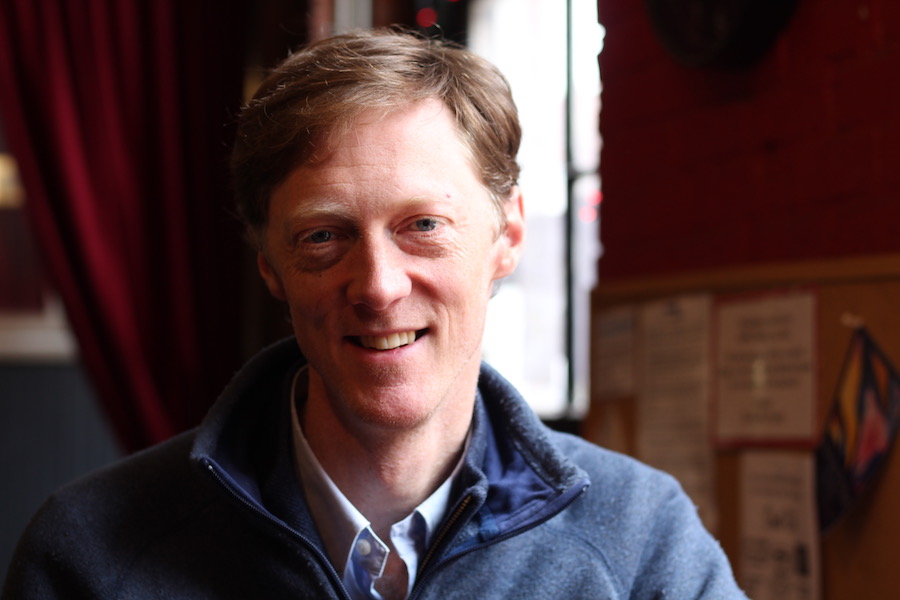 Mayoral candidate Justin Elicker’s vision for the arts can be boiled down to just two words: Support local.

As he digs into campaign season this year, eyeing a second shot at City Hall against incumbent Mayor Toni Harp, the former alder and former New Haven Land Trust executive director sat down with the Arts Paper to outline that vision, which includes providing more support to local artists, restructuring arts funding and resources, and looking closely at how a director of arts and culture can shape a city’s identity at the grassroots.

In addition to Harp, Elicker faces outsider candidates Wendy Hamilton and Urn Pendragon for the Democratic Party nomination for mayor.

For Elicker, the arts have been a constant both in and out of New Haven. Growing up in New Canaan, Conn. he had an especially musical household—his mom and dad both sang, the latter an alum of the glee club at the University of Michigan.

His dad also played the guitar, an instrument that held Elicker’s attention so greatly that he started to learn it in high school. After a particularly bad first guitar lesson, Elicker decided to teach himself instead, working melodies out by ear.

It marked the beginning of a love affair with music that is still ongoing. Using a four-track recorder in high school, he started to experiment with harmonies, singing all four parts while accompanying himself on guitar and harmonica (he rivals Kermit The Frog’s “Rainbow Connection” in one such example below).

As a student at Middlebury College, Elicker had trouble remembering state capitals until he devised a song, and had them down in a day. He did the same with U.S. presidents, flexing a muscle for making up songs that he still likes to flex today. In a recent interview, he joked that he sees a number of children's albums on the far horizon, after his life in politics has ended.

In college he also joined The Dissipated Eight, an a cappella group that won awards for two albums on which he was featured (click here to hear him take it away on “The Bare Necessities,” sing bass harmony on Yazoo’s “Only You,” and spit on “Only If”).

By the time he moved to New Haven in 2007, he said he was thinking about how the arts functioned as a social connector, transferrable far beyond a concert hall or a cappella stage.

“I’m particularly into music, and I enjoy it for its inherent value,” he said in a recent interview at Koffee? on Audubon Street. “But what I more enjoy it for is the way it can connect people … You have a group of people that are sitting around talking. You pull out a guitar and the atmosphere and the content of conversation, the general feeling of connection with each other changes.”

Now, he’s bringing that mellifluous view into his current campaign. It’s not a new idea for him, but an evolving one: during his 2013 run for mayor, Elicker gave an impassioned pitch for music at an arts-focused debate, praising the creative sector as a tool for economic development, youth engagement and citywide connection.

In February 2014, he took it to his tenure at the New Haven Land Trust, expanding performing arts (and more recently, literacy) initiatives to sites in Newhallville, Fair Haven and The Hill two years ago. In April of 2018, Bossa Nova and South African rhythm came to the English Street location in Fair Haven. Last summer, as Sofar Sounds grew right out of the soil on Truman Street, New Haveners learned to forage and eat wild plants closer to Long Wharf and perfected their down dogs with free yoga in the garden at in Fair Haven.

After leaving the organization earlier this month, he said he’s seen how arts can both activate a space and create a jobs pipeline, a realization that has led him to throw support behind local artists whenever he can. If elected mayor, he said he plans to drastically rework the city’s Division of Arts, Culture, and Tourism, currently helmed by Andy Wolf.

In his past four years under Mayor Toni Harp, Wolf has split his focus between "branding" New Haven and bringing in acts from both in and outside the city and the state, many of which have performed publicly on the New Haven Green or at City Hall. He has thrown the city several birthday parties, coordinated large-scale events and helped facilitate New Haven's budding sister city relationship with Changsha, China.

“It seems like something that is significantly missing and needs to be the priority for the office is making sure New Haven artists are supported,” Elicker said. “Most of the arts organizations in New Haven are thinking and prioritizing economic development in a way of people coming in to New Haven from the suburbs and buying tickets to shows.”

For him, that means a multi-part change to the division, with a director who will work at the grassroots to bring community groups together and make sure they are supported fiscally and otherwise. While he said those still include established institutions—those so-called “anchor” organizations that receive state line item funding, for instance—he’s more interested in small organizations such as Collective Consciousness Theatre, Bregamos Community Theater and The State House, all three of which have voiced a commitment to access, equity, and representation in their work.

Right now, he said he sees a pattern of arts funding leaving the city instead of supporting its artists, who sometimes hold down multiple jobs and still struggle financially. He criticized representatives of the city’s Percent for Art program in their decision to award a mural commission for the new Barack H. Obama Magnet University School to a New York artist, when Westvillian Noé Jimenez was among the three finalists.

He also cited the IMatter Project, by Guilford-based photographer Rob Goldman, as a commission that could have gone to a New Haven artist, particularly a person of color. In the photographs, now installed around the city, New Haven youth pose above their own “IMatter” statements, their faces fixed right at the viewer or laughing in space.

They’re complicated pieces of public art: empowering and striking through one lens, but voyeuristic and exploitative through the other. And for Elicker, they’re befuddling—because he loses count when he thinks of how many local artists could have done the job instead.

“We’re not supporting our own, believing in our own … particularly people of color that may not have the network and connections,” he said. “And so it does two things. It sends money outside of New Haven, when our money should stay in New Haven at every opportunity we have, and it doesn’t support New Haven artists that are trying to grow.”

If elected, that philosophy of keeping it local extends to the position, which he'd like to see doing more work across city departments. He cited areas that he sees intersecting with the arts, but from which the division is largely absent, namely education, parks, recreation and trees and youth services. He criticized the current administration for bringing the arts, culture and tourism director to China, a decision that followed Wolf’s assistance in securing Changsha as a sister city to New Haven.

“We should be more deliberate, beyond the cost of that department, about the ways the city spends money to support the arts and ways the city doesn’t,” he said. “I think it sets the tone that we’re looking outside of New Haven instead of spending that kind of money on New Haven residents.”

While he would not name any specific people he sees in the role of arts czar in an Elicker administration, he added that “for every department head, we need people that are highly qualified, have experience in the area, that are representative of the city, that look like the city, and that have strong integrity. The arts is no different.”

He said he’s also working to bridge a stark racial divide that ultimately defined the 2013 election—and sees the arts as an active part of that.

He criticized the city’s nearly-singular focus on luxury housing as economic development and praised job training initiatives at sites including the Connecticut Center for Arts & Technology (ConnCAT), which has announced its plan to expand this year. He echoed the need for cross-sector job creation, for which there has been an arts-driven push at the state level with the proposal for a Cultural Facilities Fund.

He also said he sees the arts as deeply interconnected with the social justice community—much of which is not white—and plans to champion those advocates and activists if elected. He criticized the amount of time it took to pass a Civilian Review Board with subpoena power, and what he sees as the mayor's resistance to passing official sanctuary city legislation. In New Haven's activist circles, he said he sees strong overlaps with the arts, which are often employed as a call-to-arms or chance to regroup in the thick of political action.

“I think there’s so many examples of our current leadership not supporting the very policies that would begin to dismantle the systemic racism that exists in the city, ” he said. “And is not talking about these issues in a deep and meaningful way. I will be championing those issues—and I think the arts is another way to do that. To be turning the very idea of what arts means on its head.”

Correction: An earlier version of this article incorrectly stated that Rob Goldman was based in New York. Mr. Goldman is based in Guilford.