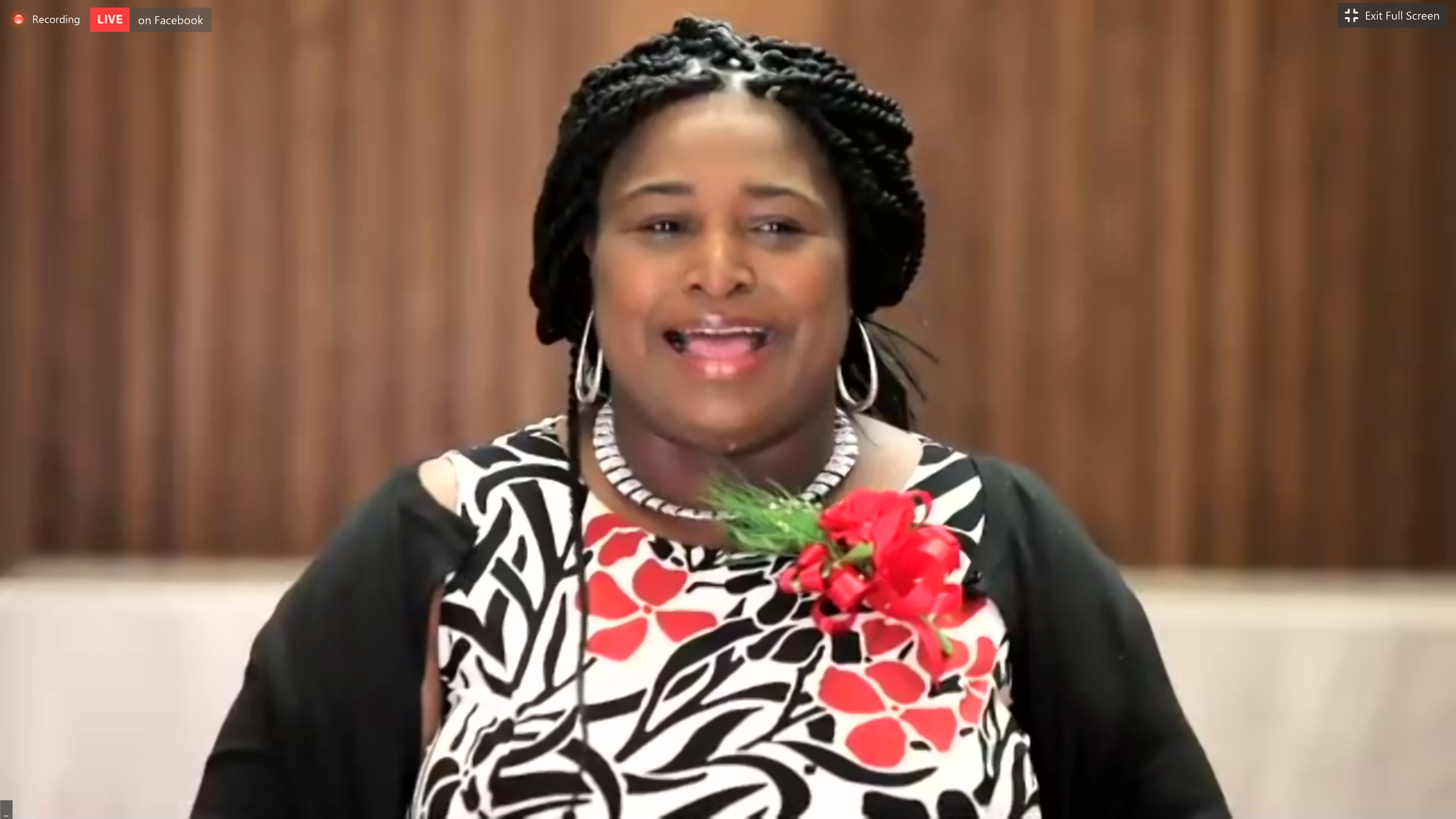 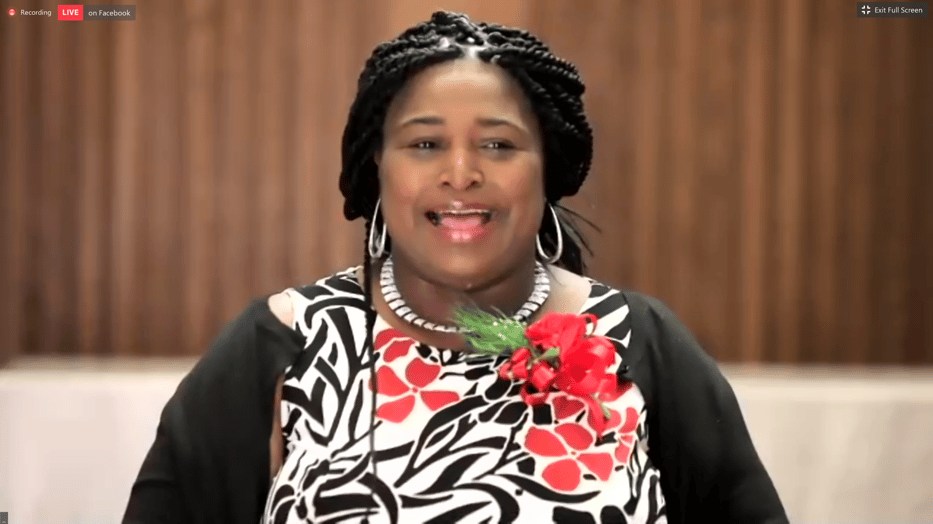 Barbara Vereen accepts her award in person at First & Summerfield United Methodist Church. She wore a mask during the evening but removed it to speak for her speech.

In 1979, Barbara Vereen used to watch well-dressed workers enter Winchester Repeating Arms factory from her window on the seventh floor of a nearby building. One day, she woke up to the sight of workers chanting for guaranteed jobs and squaring off against police in riot gear.

It was what would later be known as the 1979 Winchester Strikes. And it changed her understanding of the power of workers.

While some awardees received their honors in person at First & Summerfield United Methodist Church—the home of Unite Here locals 34 and 35—most attendees tuned in from their homes and even campaign stops in Georgia. Emcees Lisa Bergman and Ben McManus dedicated the evening to all essential workers during COVID-19, Black Lives Matter, and the success of the 2020 elections. 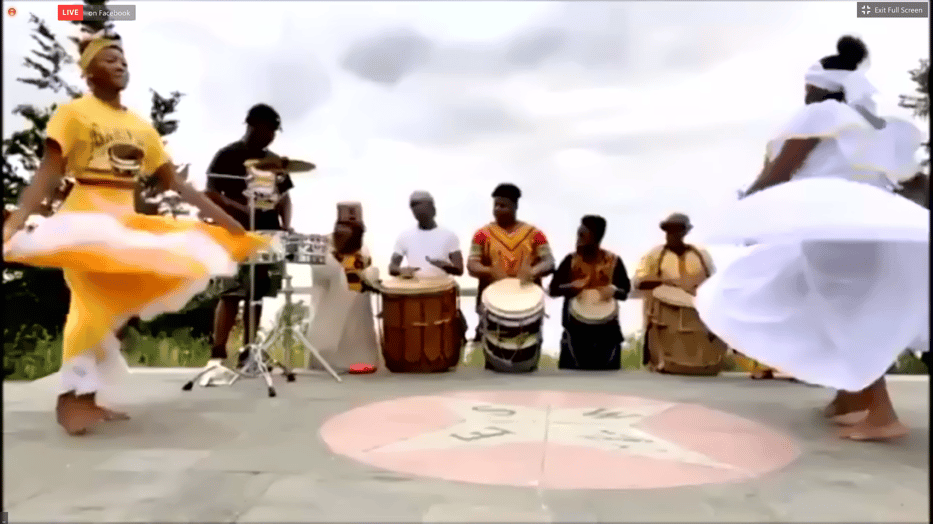 A screenshot of the BODOMA Garifuna Cultural Band performance

The night opened with a performance by the Bronx-based BODOMA Garifuna Cultural Band. The Garifuna are an Afro-indigenous group with roots in Honduras, and the band uses music as a vehicle to preserve their culture and language.

The two dancers, one dressed in a yellow dress and the other in white, moved in unison to the rapid drumming coming from the five drummers in the background. As the music sped up, so did their footwork and the ruffles of their bright dresses blurred with one another.

Later in the evening, Manuel Camacho, president of Ice The Beef’s Latino Caucaus and chair of the New Haven Young Communist League, presented a poem titled “Unity For All.”

As the ceremony began, mother-child duo Georgine and Genesis Fuentes recounted their history with the Communist party and the importance of involving the youth in the work to inspire future generations. Jamie Myers-McPhail, an organizer with New Haven Rising, also called for more solidarity and organizing in the face of economic and racial crises.

Ken Suzuki, a 2018 awardee and secretary-treasurer of Unite Here Local 34, cited Vereen’s work as the staff director at Unite Here Local 34 and Unite Black Leadership Group as helping secure a job pipeline for Black and brown neighborhoods to union jobs at Yale. Vereen, who serves as Ward 20 co-chair, explained that she was able to raise her three children as a single mom due to her union job and community members fighting together.

Citing proof in the power of organizing, she pointed to Newhallville’s high voter turnout this past election. This election had the sixth highest turnout in the city with more than 1,800 votes.

After receiving her award in person, she drove down to Georgia to join voter registration efforts for the state’s two runoff elections. She had packed her car prior to the awards ceremony. She is one of several New Haveners on the ground there: local organizer Marcey Lynn Jones has also traveled to the state to pound the pavement. 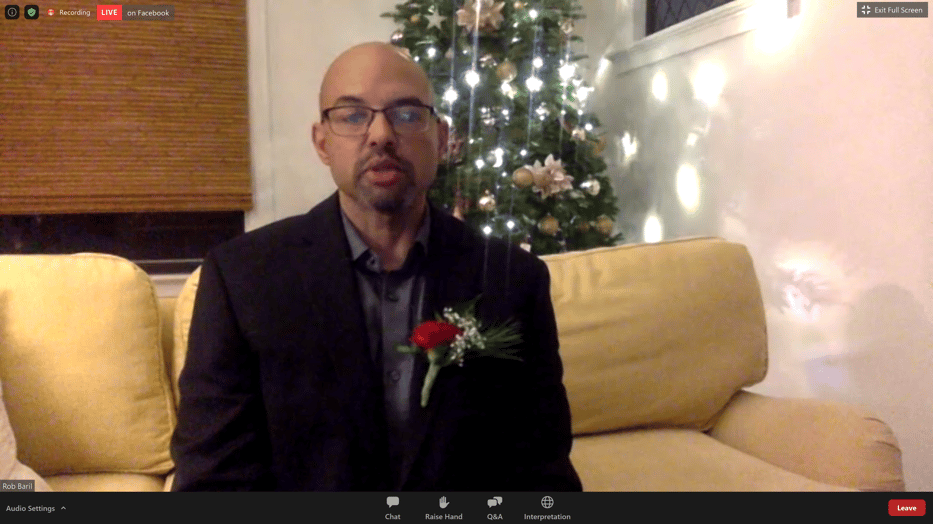 Robyn Porter, State Representative for Hamden, called in from Georgia to recognize awardee Baril. She praised him for a long history of organizing for healthcare workers as a member and then president of SEIU District 1199 New England. SEIU represents almost 30,000 healthcare and maintenance workers, largely Black and Latina women, in Connecticut and Rhode Island.

Baril dedicated his award to the 20 members of SEIU who died from COVID-19, and the seven million healthcare workers on the frontlines.

“They are labeled essential workers, but treated as expendable,” he said. “But they haven’t given up.” 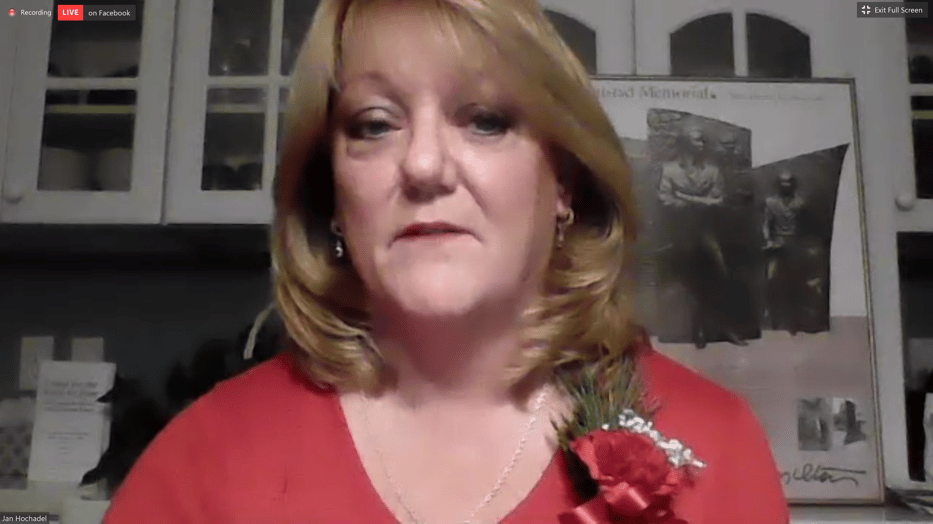 Screenshot of Jan Hochadel accepting her award from her home.

Hochadel, president of AFT Connecticut, was recognized as a leader in fighting for workplace safety for public school staff and healthcare workers across the state. Presenter Shellye Davis, a 2018 awardee and co-president of the Hartford Federation of Paraeducators, remembered her as a key organizer in the two-day nurses’ strike at Backus Hospital in Norwich.

The hospital has allegedly not provided adequate personal protective gear (PPE)for the staff, forcing nurses to reuse N-95 masks and other PPE equipment. Some of the workers contracted COVID-19 due to these practices.

These types of incidents are the ones that should not be forgotten after the pandemic has ended, she said. She called it a time to reimagine healthcare in this country.

“We cannot go back to normal and take these workers for granted,” she said. “We must have healthcare that removes profit. 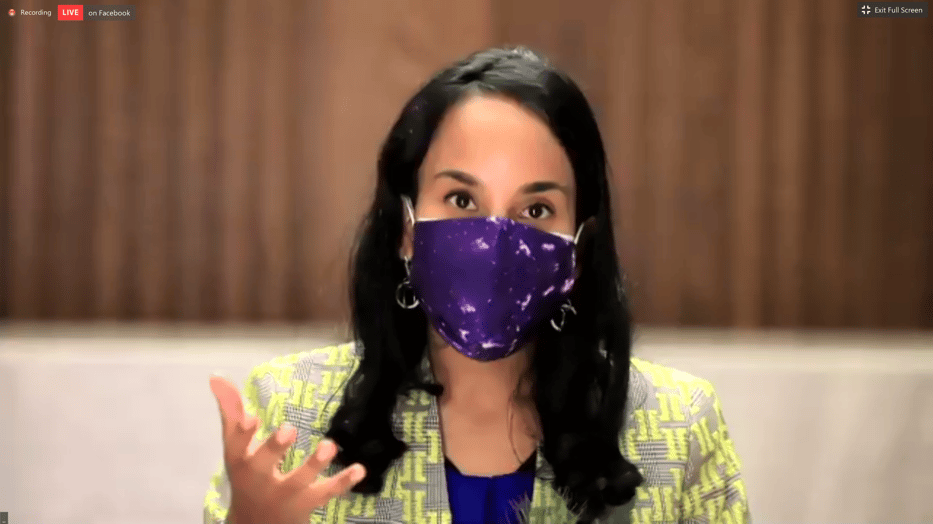 State Rep. Edwin Vargas, a Democrat who represents Hartford presented the final award to Hartford Councilwoman Wildaliz Bermudez. He said she was destined to represent the people— at just seven years old, she was one of the plaintiffs in the landmark 1989 case Sheff v. O'Neill. The ruling stated that the separation of suburban and Hartford students violated the segregation clause in the Connecticut Constitution.

It ruled that the state was obligated to provide equal educational opportunity for all students. The state reached a new settlement in January of this year after 30 years of falling short of the goal.

In her work with the Working Families Party, Bermudez helped lead the way for a civilian police review board in Hartford this November. She was also an outspoken critic and organizer against the the cost of finishing Hartford Yard Goats Dunkin Donuts Park renovations in 2016.

“I know more than ever that we change the world through our actions,” she said. “Our voices matter. Our deeds matter.”