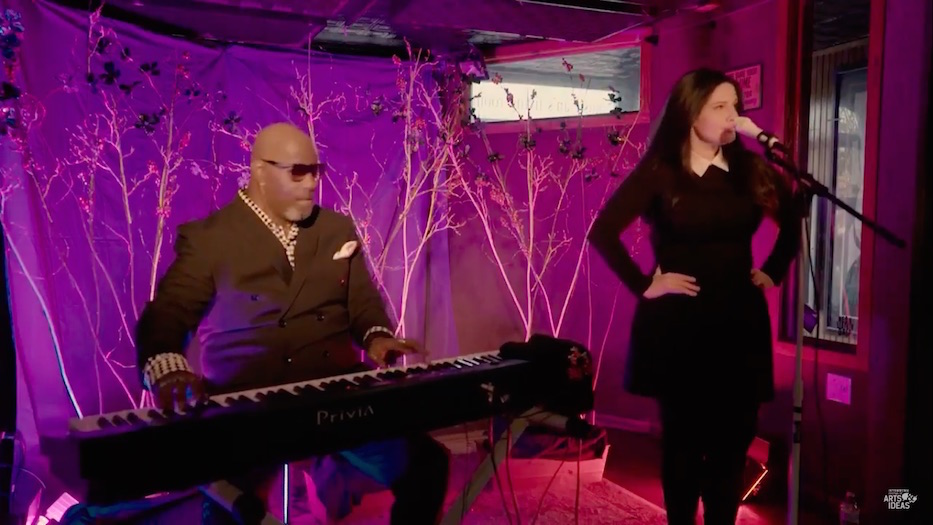 Chris "Big Dog" Davis’ hands were flying on the keyboard. Beside him, vocalist Dana Lauren lifted her arms and threw her head back, scat-singing in time with the music. Brown hair flew past her shoulders. In the velveteen folds of her voice, Lauren turned a song into an urgent promise. COVID-19 be damned, Santa Claus was still coming to town.

It is one of the ways that the festival is using COVID-19 to expand its year-round programming, and support local economic development and Black-owned businesses during the pandemic. All proceeds go directly to the restaurants.

“I can't imagine working in any other way,” said Executive Director Shelley Quiala in a phone call before the performance. “I believe really deeply that during a crisis, that your strengths come from a strong foundation. So that's where we invest first. We invest in the strengths of the foundation, and that’s in the community that exists.” 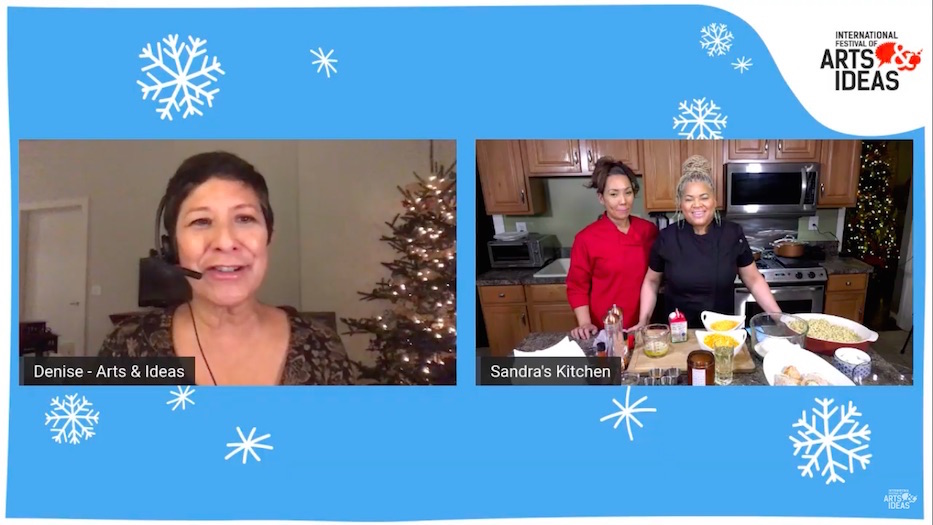 Tuesday, that foundation started with Davis, who ushered in the holiday spirit from an empty Cafe Nine decorated with bright lights, a makeshift curtain, and small trees that glowed silver and pink in the light. This time of year, he’s typically on the road touring with musician Gerald Albright and prepping for a reading and concert at the Stetson Branch of the New Haven Free Public Library.

This year, COVID-19 had other plans. Davis started the year at Smilow Cancer Center for stage four lymphoma. When he left the hospital in March, New Haven was in the midst of entering lockdown. As travel became untenable, he worked on recording from home. When he met Quiala in the fall and told her he was working on a Christmas album, the two clicked.

Cafe Nine was the right fit to record, he added. Owner Paul Mayer has opened the empty bar to artists since August, as a way to make a little money while music venues remain largely shuttered. Davis, who grew up nearby in Waterbury, also loves the local history of the spot. In lieu of hits from his 2016 Christmas hop-hopera, he planned a set of classic carols infused with gospel and jazz.

“It was exciting,” he said. “It was good to do something musical. We still have to find a way to do music. There’s no travel. There’s no feedback. It’s empty—you’re not feeding off the audience. It's not only in music. sports—there's no stadium. No hot dog stand. This, it’s different, but I think it went over well.” 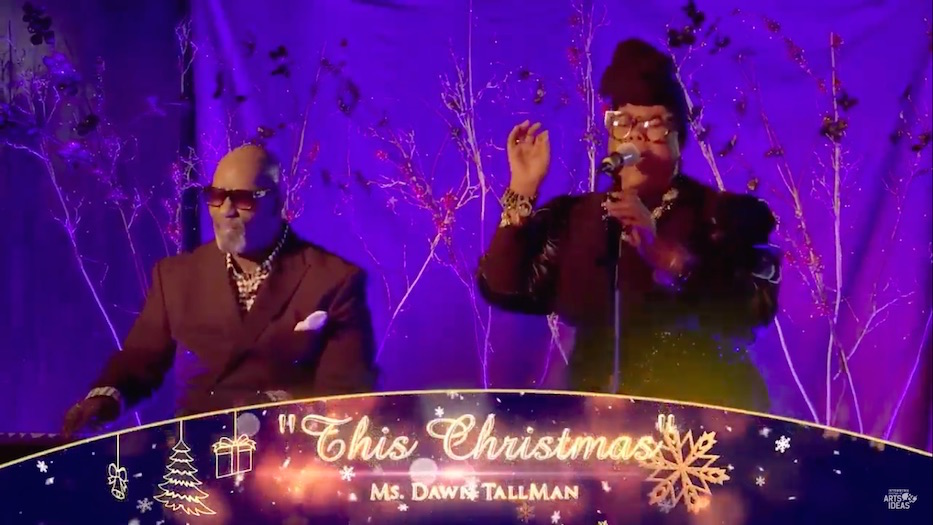 As Davis played viewers in with a smooth take on “Deck The Halls,” attendees milled around their kitchens, setting out ingredients for macaroni and cheese, fried chicken, steamed green beans, and a cocktail for which Anchor Spa provided a prepackaged kit. On screen, two boxes popped up beside each other.

In one, Tours Manager Denise Santisteban got ready to learn how to make a Kentucky Refresher. In the other, Anchor Owner Karl Franz Williams and Bar Manager Raasikh Muhammad stood behind a thick layer of plexiglass, greeting Santisteban as she beamed into the bar.

They waved their hands over containers of lemon juice, bourbon, simple syrup, and sage and mint leaves as if they were casting a spell. The scent of ginger, cut with cardamom seeds, rose from the prepackaged kits. Williams, hands in motion, ran through an abridged history of bourbon. 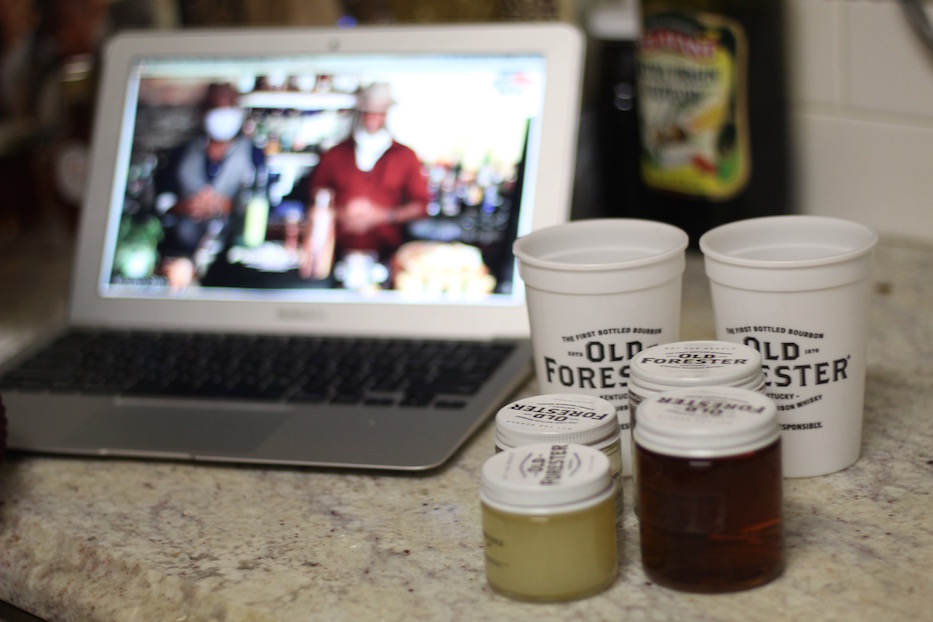 As he whipped out a muddler, he encouraged attendees to work with what they had at home. Any blunt object would do, he said. In this reporter’s kitchen, an old and unused wooden rolling pin appeared from the inner depths of a cabinet.

“You can use a rolling pin,” he said as if on cue, starting to laugh. “You can put it in a towel and bang it with a hammer. Or whatever! The whole idea is you just want to crush these ingredients, and get those flavors mashed in there.”

He held out a single sage leaf, emerald green as he laid it flat on his palm. He brought his other hand down on it. The sound came sharply across the video feed.

“You generally don’t want to muddle your herbs,” he said as Muhammad measured out simple syrup and lemon juice. “You just want to spank ‘em and get them in there.” 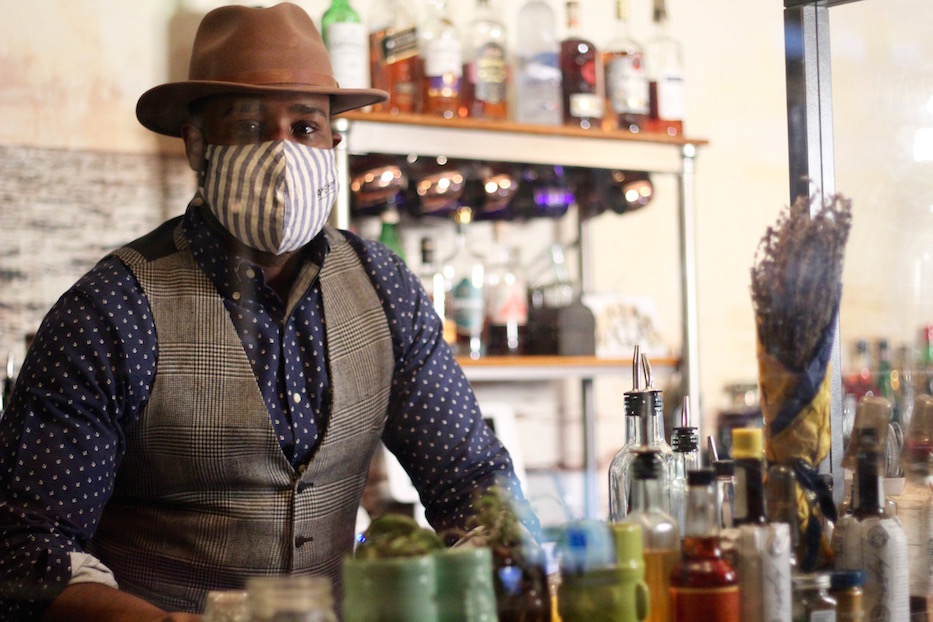 Tuesday afternoon, Muhammad said he and Williams were excited to participate in the event. Since March, Anchor has offered at-home cocktail kits and menu items for takeout. From June through November, the bar saw more business than it had before COVID-19, thanks largely to College Street terrasse seating and a new influx of regular patrons who replaced Yalies.

Since the state’s rollback in early November, patrons have slowed to a trickle. Muhammad said that shift is hard after the bar went “through extreme financial lengths to make sure people were safe.”

“We never really closed,” he said. “I think we’re trying to keep that sense of normalcy. It’s huge. As a small business, we don’t have that pot of gold that huge businesses have. We try to be as involved in the community as possible, and this is part of that.” 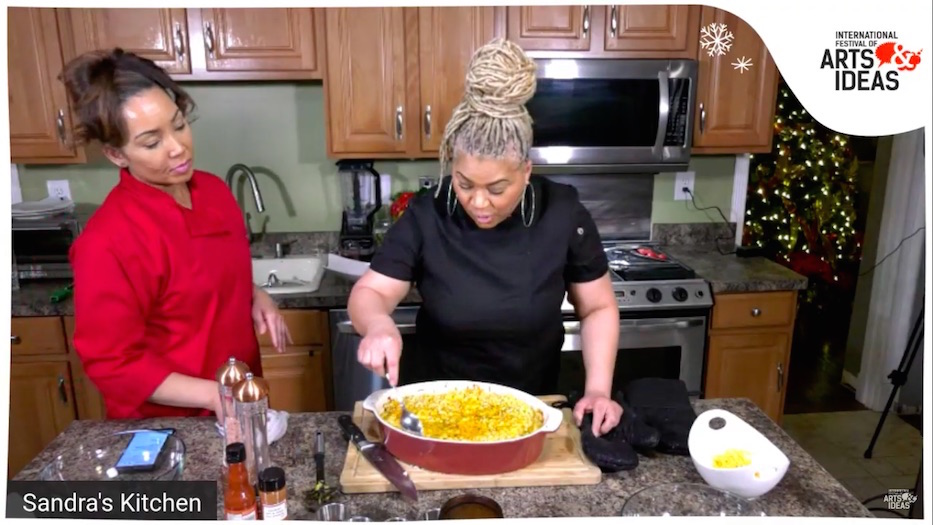 Just a few miles away on Congress Avenue, Sandra Harris-Pittman started preparations for mac and cheese, the first dish she learned to make with her mom (Harris-Pittman’s mother is Mary Harris, after whom Mama Mary’s on Whalley Avenue is named). When Anchor’s feed unexpectedly dropped, she greeted viewers from a kitchen stocked with eggs, heavy cream, cheese, and butter. Jars of pink salt and paprika sat nearby like old friends.

She started to pour heavy cream over a huge dish of elbow macaroni, and instantly viewers could have been in her kitchen. She took them back to her beginnings on Edgewood Avenue, where her mother’s mac and cheese and fried chicken became legendary in a house “filled with a lot of love.” She jumped into the present, recalling how the dish is the first thing her grandchildren ask for when they enter the restaurant. 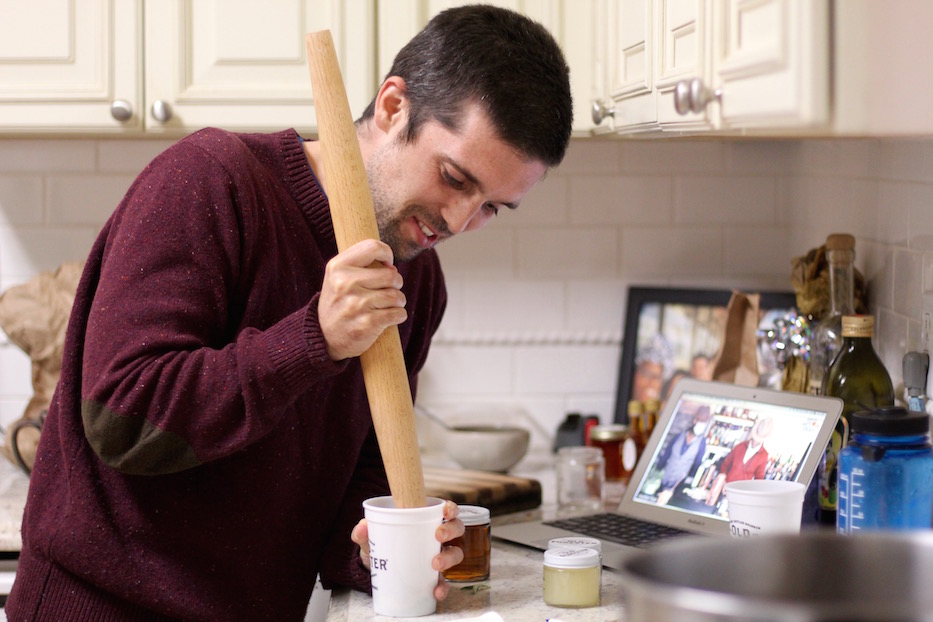 Praise filled the chat. As Harris-Pittman slid the dish into the oven, Santisteban moved back to Anchor, where the cocktail was almost ready. The frame shifted again: Davis and Lauren filled the frame with a rush of sound. On screen, they shimmied and wailed to the music as if they were in front of a full house.

Later in the evening, Davis returned with “Heal The World,” a new song that doubled as a Christmas benediction. He said that he tried to take the same verve that he usually puts into his annual “Rudolph” performance for young readers at Stetson library. This year, his Christmas will be quieter. To stop the spread of COVID-19, he plans to FaceTime with his five daughters instead of gathering in person.

“When you think you are the weakest in life sometimes, you become the strongest,” he said. “Rudolph got bullied until he grew up, and all of a sudden they needed his nose. That lesson is for the kids—and adults too. That’s what it's all about to me. Just sharing stories.”

Both Quiala and Director of Programming Malakhi Eason said they are thinking about how to add more year-round events to the festival’s lineup. Following the summer months, they rolled out a program around voting and the election in October. Tuesday’s event was one of two holiday-themed activities this month. Quiala joked that she’s throwing things at the wall to see what sticks.

“I have a passion for community,” Eason said. “The restaurants and the artists that are in New Haven are community. That’s the thing that heals people. If we're not feeding into them, giving back to them, allowing them to live, what are we doing? When we do that for them, we the people are healed by the art. As we keep those things running, we are able to survive.”