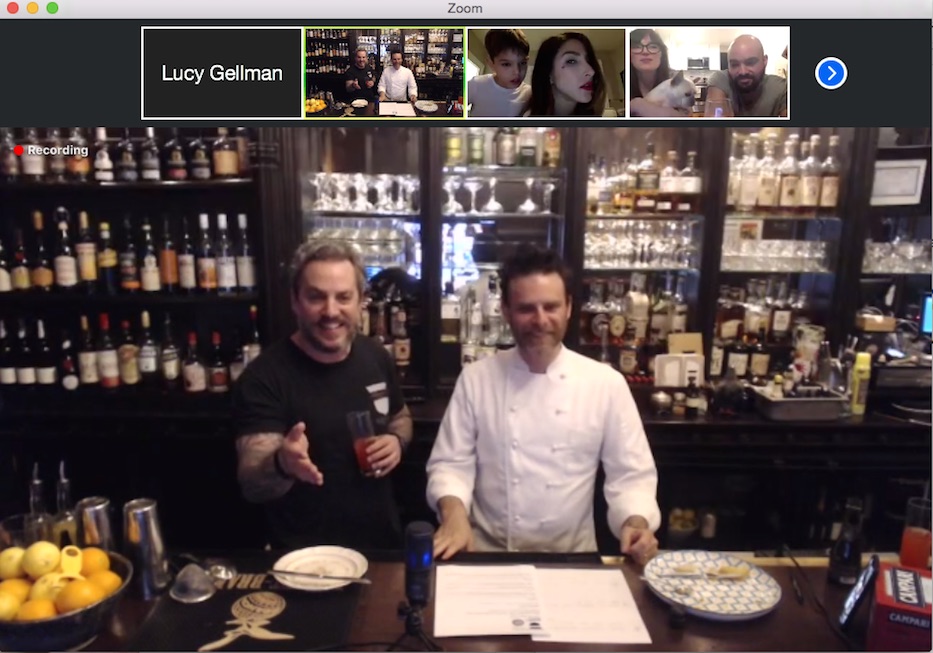 The two stood side by side like a comedy duo. Tim Cabral lifted a cocktail shaker and began to dance to the sound of the ice inside. Avi Szapiro explained the alchemy of poached lemons and slow-roasted beets. Around them, Ordinary's gleaming wood counters sat empty. Cabral scrunched his eyes, looked into a chat box and grinned.

Cabral is the co-owner of Ordinary New Haven, a tavern and cocktail bar nestled on Chapel Street downtown. Szapiro is the owner and executive chef at ROÌA, a French-Italian restaurant just around the corner on College Street. Friday, the two dipped into the world of virtual food programming with the International Festival of Arts & Ideas, which has moved all of its events online in the midst of COVID-19.

This year, the festival is giving 100 percent of the proceeds from those events directly to the restaurants, which have been hit hard by closures. Friday’s pairing raised a total of $12,000, with over 300 attendees. Both establishments, which are offering a mix of curbside pickup, home cocktail kits, and free meals for frontline workers, estimate that they have lost hundreds of thousands of dollars in two months.

“We’re all in this together,” Cabral said in a phone interview Sunday. “Everyone has a story, and we’re all fighting with this to stay afloat.” 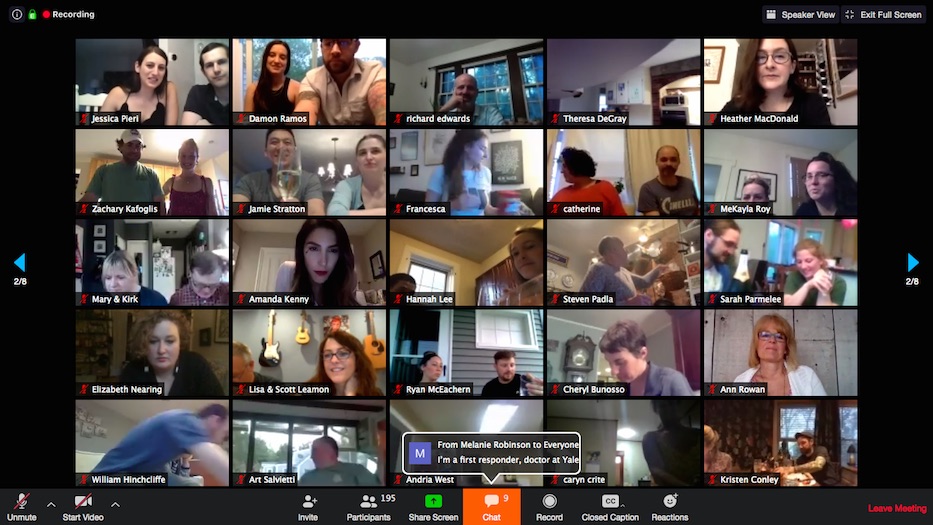 The idea was born earlier this year, as the festival moved its programming online. For years, it has offered food tours, from Grand Avenue gastronomy to dinners on the Woodbridge farm of Miya’s Sushi chef Bun Lai. As it became clear that those could not take place in physical space, Tours Program Manager Denise Santisteban pitched restaurants on a different model: food kits that attendees could pick up and take home, then prepare with virtual instruction and hundreds of other New Haveners.

A big dinner party—but on Zoom. The festival would just act as a middle man, to get more business to the restaurants.

Cabral, who has been collaborating with the festival for years, jumped at the idea. For the past two months, both he and Szapiro have been grappling with layoffs and furloughs, employees who are struggling to get unemployment, and applications for relief funding. Every other week, Cabral has been offering cocktail and cheese pairings with co-owner Jason Sobocinski, who is also a partner on Olmo.

After the first one, for which 150 attendees signed up and bought kits, “people reached out saying they took showers,” Cabral recalled. “They got dressed. It was like a date night for couples.”

Because he’s able to do kits for a large number of people, he’s gotten some business from hospitals in the past weeks, as they host extra events and benefits for their employees. Sunday found him back in the bar, preparing 300 cocktail kits for a virtual benefit at the Shubert Theatre.

It’s no substitute for being open: April, May and June are usually the busiest months for downtown businesses, because of Yale’s end-of-year festivities and commencement. Both Ordinary and ROÌA closed down in mid-March, just days before Gov. Ned Lamont issued an executive order closing down all gyms, bars, restaurants, and theaters. 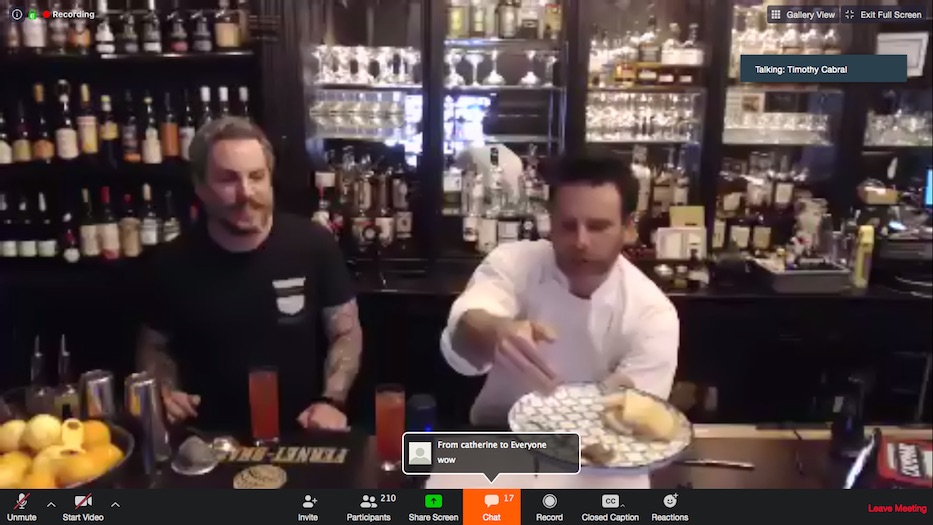 Cabral furloughed 12 employees. Szapiro laid off 20 employees in a decision that he said was "heartbreaking, really." With their doors closed, the two tried to pivot: Szapiro went to curbside pickup and became one of the founding partners of the Frontline Foods New Haven, with Sobocinski and Koffee? New Haven owner Duncan Goodall.

The initiative jumped from three to seven restaurants, and at one time had as many as 22 onboard. Szapiro was able to hire back five of the employees he had laid off. He said he spends the bulk of his time thinking about the other 15.

In addition to Frontline Foods, he has been working to provide 100 meals per week to restaurant employees who are out of work. While both establishments have received Payment Protection Program (PPP) relief, Szapiro noted that the program does not account for lost revenue.

“When you ask me what I think of the future, I try to keep positive,” he said. “I think it will be something good. But how that’s going to manifest, I don’t know. Something like a virtual cooking class … it pushes you to reinvent yourself.”

Friday, the two brought that verve to the festival, via one huge cocktail party on over 200 screens. As attendees tuned in from their kitchens, couches, and dining room tables, Cabral and Szapiro stood shoulder-to-shoulder behind the bar, joking with each other as they welcomed attendees.

It felt normal, until suddenly it didn't, and attendees remembered why they were all on one-inch boxes. Just before he mixed bourbon with honey syrup and lemon juice, Cabral mentioned that he and Szapiro had both been tested for COVID-19 before the event, to make sure it was safe for them to share the same physical space. It wasn’t a joke: the two had gone to the Long Wharf rapid testing site earlier that week, texting each other messages of support as they sat in parallel lanes in their cars. 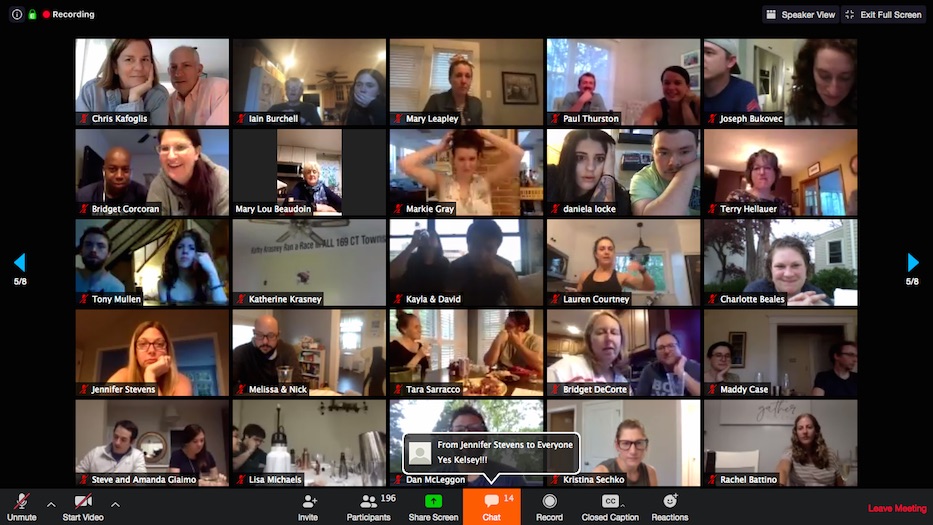 Later in the evening, Cabral spotted Alex Ramirez of Nail Haven, and paused before getting into the weeds on whether her business would be part of the state’s four-phase reopening on Wednesday. Both shouted to old friends, and then seemed to remember themselves with rushed reminders to mute and unmute their mics.

Szapiro took time to shout out essential workers, giving attendees a moment to think about those on the front line while they sat back with cocktails, Comte cheese, and secrets on how to preserve hundreds of lemons in the face of a sudden closure (spoiler: the answer is always salt).

Then they’d bounce back to recreating a cocktail class: the two screenshared silly photos of friends and colleagues, teased each other about getting old, and riffed on hundreds of comments that flooded the chat box. There were impromptu musical performances and cocktail reviews that left them grinning. Forty-five minutes after the class was supposed to end, it was still going. At least 50 attendees had stayed on just to catch up.

Cabral said that balance—the sense that the world is constantly off kilter—defines much of his day-to-day experience now. He’ll be walking down the street and see a parent pushing a baby stroller, and realize that both they and the child are wearing masks. He’s spotted the city’s new “Mask Up” billboards and read about bars putting up physical barriers and rolling out campaigns that pair cocktails with face shields.

“The idea of normal just doesn’t exist anymore,” he said. “There are nights I wake up thinking: what restaurants aren’t going to survive this?”

What exists in person, he added, “you can’t duplicate” via Zoom or Facebook Live. He’s grateful to have a virtual option: the classes have helped him keep the bar afloat, and he’s been able to attend birthday parties for family members when he isn’t working. There are also mornings when he wakes up thinking about the staff members who applied for unemployment weeks ago and still haven’t received their checks.

While this isn’t Ordinary’s first hurdle—the bar was closed for three months in early 2018, after a pipe burst and the space flooded—it is the first of this magnitude. Before the bar reopens its doors, Cabral wants to know that he’s keeping staff and patrons safe. While he may try a limited outdoor capacity this summer, he said the venue will not be one of those opening on May 20.

“The interactions, the shit talking, the reactions, the open dialogue—you don’t have that,” he said. “We’re trying to figure out how to be here when everything settles. We’re trying to figure out how to survive the crazy. How do we have a product that’s sustainable? How do we make sure that our staff is okay? We’ve been here seven years, and my goal is that the business will outlive us.”

Over the next weeks, the festival plans to continue working with local restaurants, which have also included Bears Smokehouse and Black Hog Brewing Company. On May 22, there is an upcoming class with John Ginnetti of 116 Crown. Like Friday’s event, all of the proceeds will go directly to the restaurants.

Bobby Asher, director of programming at the festival, called the partnership “something of a moral obligation.” When he arrived in New Haven for the position in October of last year, Asher tried to get to know New Haven through its restaurants. That odyssey was cut short by COVID-19.

“There’s something about food that is really necessary, but also connected to joy,” he said. “It’s connected to arts in the same way. Before this, we used to say: what can you possibly do to make people stop experiencing arts in a communal way? And we found out. I think the restaurant community works on very thin margins. This is a way to help.”

"We're just going to meet people where they are," he added of the programming. "Connecting over food—it really humanizes people."