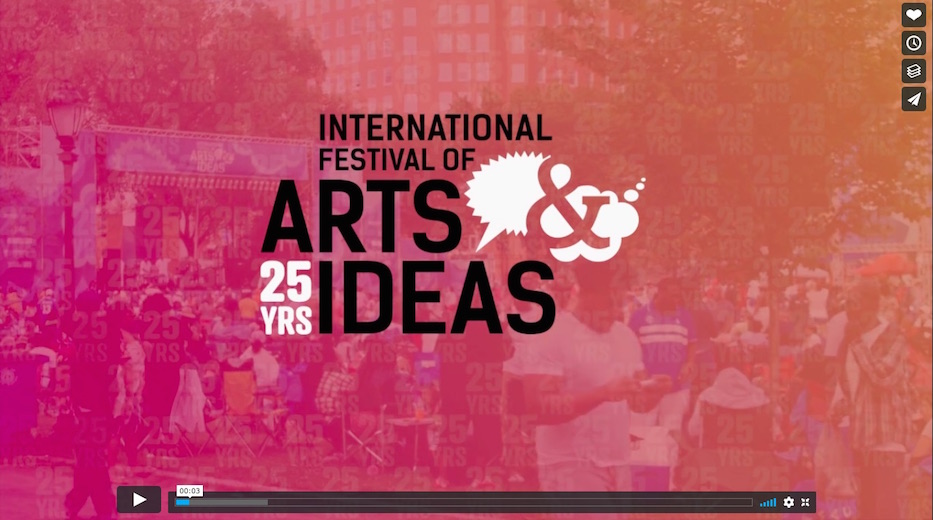 The 25th annual International Festival of Arts & Ideas was always going to be different. Directors Tom Griggs and Liz Fisher just didn't expect that a global pandemic would push them onto a virtual stage.

The two, who serve as co-directors of the festival, toasted that strange new reality Tuesday afternoon, in an email and video uploaded to the festival's Vimeo page and website. In the midst of COVID-19, the organization has made the decision to move its signature June festival online, and roll out a series of virtual events starting this month.

In the face of an arts landscape besieged by layoffs and furloughs, it has managed to retain all of its current staff in the process.

"While it won’t be possible for us to continue with the live programming that we had planned, we’re excited by the new virtual and physically distanced program that we are reimagining to virtually embrace our audience, artists, and community, and to deliver, in a new way, all the things you know and love about the Festival," Griggs said.

"This isn’t the 25th Anniversary we imagined," Fisher added, raising a glass of Scotch to meet Grigg's glass across digital space. "But it’s a Festival we can all take part in—and love!"

The festival was originally scheduled to take place June 13–27, with public and ticketed performances across downtown New Haven. But last month, as COVID-19 forced months of cancellations in New Haven and across the country, that format proved, suddenly, impossible.

International performances were cancelled en masse. Large gatherings, including the festival's signature concerts on the New Haven Green, were no longer tenable. In fact, gathering as the world knew it had been turned on its head. In the midst of everything, arts festivals, dance ensembles, and theater companies issued waves of layoffs.

The festival pivoted. Instead of canceling or postponing its 25th anniversary season, Griggs and Fisher refocused their attention on digital space and the local artists, thinkers, and doers who could operate in it. They talked about how they could use an arts festival, which is often billed as an economic driver for the city, to support small businesses and local restaurants even if their doors spaces weren't open. They envisioned how a body can move on a walking tour through the city, even if it's all alone.

Tuesday, they unveiled just a few of those plans, with the promise of more on the horizon. In the absence of the festival's food experiences, Griggs said there will be new opportunities to support the culinary landscape and "especially the restaurant and bar industries who have always served the Festival so well." In addition, the festival has hopped on to partner with the Together New Haven campaign and website and will be offering free audio walking tours that users can download and take by themselves.

The festival still plans to hold events around The Big Read, an initiative of the National Endowment for the Arts through which the city forms a big, now-virtual book club. This year, the festival has chosen Advice from the Lights—its first-ever collection of poetry—by author and poet Stephanie Burt.

In addition to discussions around the book, Burt will also be speaking as part of the festival's "Democracy: We The People" series of ideas events. While much of that programming remains under wraps, the festival said Tuesday that will include poet Richard Blanco, professor and political scientist Dr. Khalilah L. Brown-Dean, and Winner Take All author and journalist Anand Giridharadas among others.

It has also included a list of COVID-19 community resources, adding itself to a growing list of regional organizations offering information on how to find and apply for relief funding.

A full schedule of events is forthcoming on the organization's website.