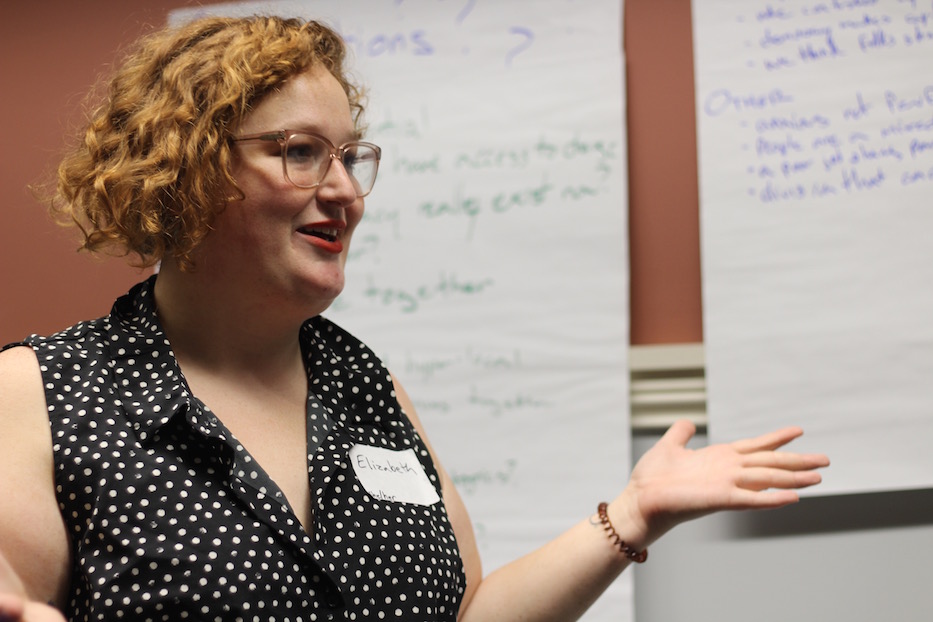 Do New Haveners want to come out to hear Supreme Court Justice Sonia Sotomayor speak? What about Maysoon Zayid, a disability rights activist who uses comedy as her secret weapon?

Would they be more interested in a panel on gentrification with representatives from New Haven Legal Assistance? Maybe a look at the state of local policing with Chief Otoniel Reyes and People Against Police Brutality? What about a discussion among former Mayors John DeStefano and Toni Harp, and newcomer Justin Elicker?

Those were just a few of the suggestions that came from community members last week, as they weighed in on who should be presenting—and on what—at the International Festival of Arts & Ideas’ “Ideas” programming this summer. The choice to democratize the process comes as the festival dedicates its 25th anniversary to “Democracy: We The People.”

The efforts are spearheaded by Bobby Asher, who came on as director of programming last year, and Curator of Ideas Programming Elizabeth Nearing. After an initial community input meeting at the New Haven Free Public Library in January—attended mostly by festival staff, board, and leadership—another meeting is planned for Feb. 4 at the New Haven Pride Center.

“The thing that’s both cool and hard about the subject matter is that it’s so broad,” Nearing said after the session. “We’re talking about democracy, and so democratizing the process feels like the way to do it. Alone I know a little, and together we know a lot. It’s trusting the plurality of voices.”

As they launched into the first meeting, attendees split into groups based on how they were feeling around the concept of democracy itself. Arts advocates, librarians, and a few A&I board members were, it turned out, hopeful for the institution. Another group tilted towards fear and frustration. A handful of attendees stood at the far side of the room after realizing they didn’t know how to feel.

“Are we even in a democracy?” Nearing asked as participants rearranged themselves, a few unsure of which group to join. “What feeling does it [that word] evoke for you?”

In a tight circle, the group that didn’t know how to feel swapped ideas. Eddie Chase, who works in patron services for the festival, voiced his concern that the Twitterverse wasn’t getting enough scrutiny—or enough pushback—as social media plays an ever larger role in elections.

New Havener Kevin McCarthy spoke about how complicated the legislative process can be—and the cautious optimism with which he still sees it. For 30 years, McCarthy worked for the state’s Office of Legislative Research in Hartford, weighing in on policy as it was researched, drafted, revised, and sent on to legislators. It wasn’t always pretty, he said. But it gave him faith that the process can work. 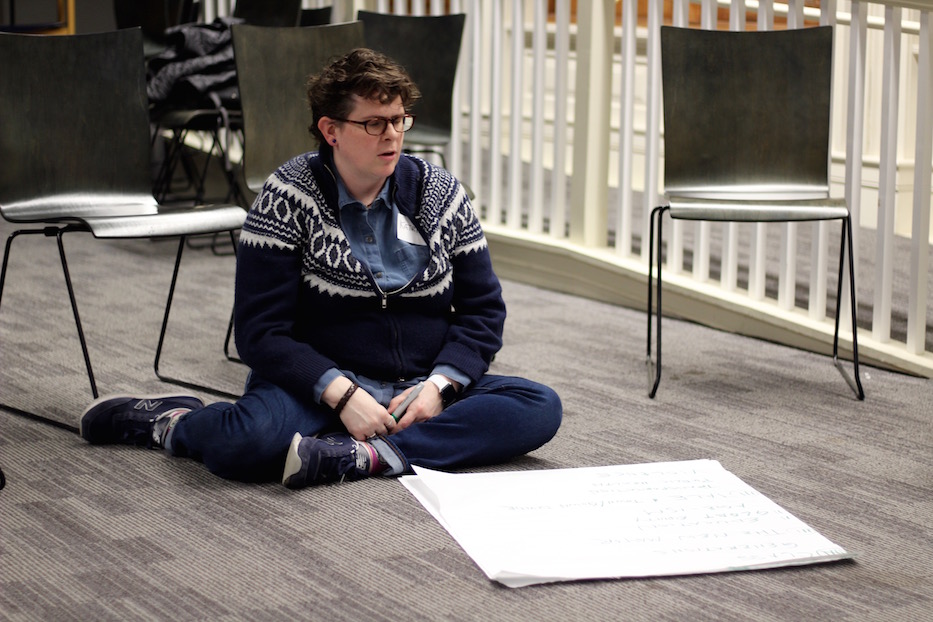 Katrina Olson, a Yale grad who has worked on and off for the festival for a series of years, wasn’t so sure.

“I feel like a lot of people don’t know what their rights in the city even are,” she said. “I’m not angry at democracy. I fear for it. I want to fix what’s broken, but I feel like it’s being destroyed every day.”

In a more positive corner of the room, A Tipping Point co-founder Anthony Allen said that participants didn’t specifically feel good when they thought about democracy, but they were committed to making the institution work.

“The idea of democracy is one that we’re excited about and working towards,” said Allen. “It means every person having one equal voice.”

Across the room, Mending Minyan founder Mikveh Warshaw was less optimistic. Often, she explained, she’s seen democracy used as a synonym for capitalism, which creates disparity and disempowerment rather than equal representation.

“It’s this lofty idea that has never been actualized, and it has been used to perpetuate violence across the world,” she said. "I think it’s super important that everyone gets a say in our physical and lived spaces, and you can use democracy for that. But I fall in the category of seeing democracy used as a way to wage wars on people, abroad and at home.”

“We have never lived in a democracy,” she later added. “Even though, theoretically, many people can vote today, we know that there is fraud. We know that money buys a lot of the votes. We know that Facebook ads control a lot of what people vote for. So, I just don’t really believe that democracy has existed or is existing.”

Nearing was ready with a marker and oversized, sticky pad of paper at the front of the room. She jotted down ideas as they flowed from different corners of the room. Then she narrowed the question: what couldn’t the festival miss talking about if it was talking about democracy?

“Housing!” someone shouted out.

Groups began to write their own lists: gentrification, redlining, Yale University and the town/gown divide. Race, racism, and indigeneity in a city that is built almost entirely on Native land. Distribution of wealth. Immigration and the military industrial state. New Haven’s still wet-behind-the-ears mayor, Justin Elicker. Environmental resources and with them, climate change and environmental racism.

Coming back together, attendees spoke on who they would like to see at some of this summer’s programming. Creative Arts Workshop Director Anne Coates suggested turning to alumni of the Community Leadership Program. McCarthy noted the Institute for Local Self-Reliance. Allison Hadley, who works part-time as a volunteer coordinator for the festival, brought Sex Workers and Allies Network (SWAN) to the table.

Christian Ponce, audience services manager at the festival, suggested programming by and for immigrants, including options presented in Spanish. As he spoke, Nearing switched the conversation from English to Spanish.

“I’m thinking about how easy it is for us to feel that white spaces are not for us,” he said.

Other attendees also stressed the importance of local, non-white voices in a festival that has struggled to highlight, showcase, and properly compensate local artists in the past. Johnny Shively, who runs Civic Impact Lab, suggested Kerry Ellington, an organizer with New Haven Legal Assistance and People against Police Brutality. Warshaw nodded, listening carefully to suggestions before she weighed in.

“I think it’s really important that we get folks that don’t get a platform a lot,” she said. “Folks that are doing the work … youth voices, undocumented voices, queer and trans voices, women of color. There’s a lot of people in those categories I could name.”

“I think having a more socially and politically minded Arts & Ideas is super important,” she added.

Before the group dispersed, Nearing encouraged attendees to spread the word about the February session at the New Haven Pride Center.

“There’s a lot of experience and expertise not in this room,” she said. “This is a really cool way to make a festival. I appreciate you taking the time to experiment and play with us.”