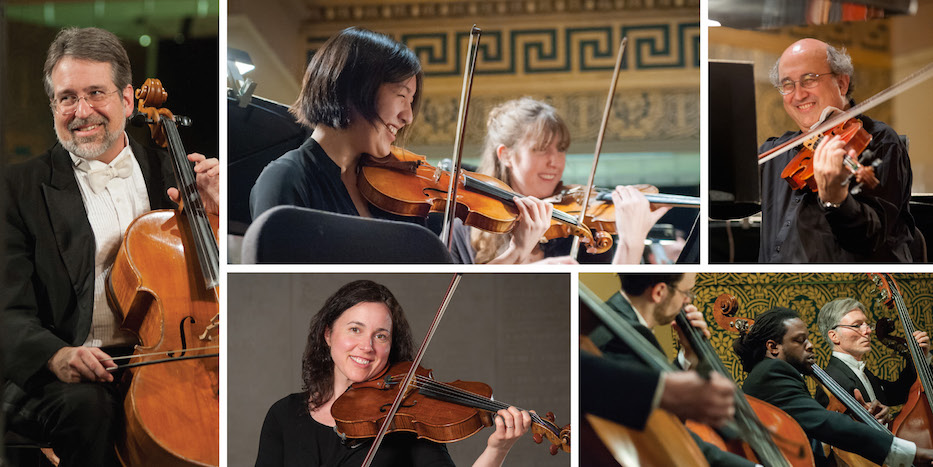 A new fund from the New Haven Symphony Orchestra (NHSO) is working to keep musicians afloat in the midst of COVID-19. In turn, the organization is turning to the community to ask for help.

Friday afternoon, the symphony announced a new Musicians' Relief Fund to directly benefit NHSO musicians who have found themselves suddenly without work as concert halls, symphony orchestras, music education programs, and private performances close their doors and cancel events for the foreseeable future.

To contribute, NHSO ticket holders can donate the cost of their cancelled concert tickets instead of asking for an exchange or refund. People can also give online.  All money goes directly to the artists. The NHSO has currently cancelled all concerts and educational programming through May of this year.

"It's such a moving target," NHSO Chief Executive Officer Elaine Carroll said on Tuesday, speaking by phone. "The current [stimulus] legislation ... it's not written for people in the gig economy to start with. They've lost all their work."

In particular, she is focused on the fact that professional musicians are contract workers, meaning that they may be excluded from COVID-19 federal relief measures. As legislators debate those measures in Washington, artists are scrambling to make up losses that amount to rent and mortgage payments, utility bills, health insurance, and groceries. If they're not performing, Carroll pointed out, they're not making money.

"Our musicians have lost work not only from the Symphony but from all of their employers," she wrote in her responses to an ongoing COVID-19 Impact Survey last week.

It comes as the symphony, like many other arts organizations across the country, braces for a world of indefinite school closures, months of cancelled performances, and uncertainty around when musicians will return to work. The organization has already lost a projected 11,000 patrons and $65,000 in revenue, according to Carroll's survey response.

Bassist Andrew Trombley, who chairs the NHSO Orchestra Committee, noted that it is reflective of a much greater loss in the entertainment industry. In addition to his work in the symphony, he plays with the New York Philharmonic, Metropolitan Opera Orchestra, Minnesota Orchestra, and Mostly Mozart Festival Orchestra and serves as adjunct faculty at New York University's Steinhardt School.

In an email Tuesday, he said he does not know if work he's lost through May will also disappear during the summer months.

"Social isolation is heartbreaking to anyone who works in a field that is meant to bring joy and relief to our communities," he wrote. "Musicians and orchestras are trying their best to have some sort of virtual presence but that doesn't necessarily pay the bills unfortunately. The technology we have available is amazing and allows me continue working with my students and stay connected to all of my colleagues but it's unfortunately far from a perfect replacement."

It also reflects how quickly COVID-19 has bought arts nonprofits, particularly those that rely on live performance and education, to a halt. Earlier this month, the NHSO live streamed its March 5 concert at Woolsey Hall in the midst of mounting COVID-19 anxieties. Less than a week later, Carroll and NHSO Education Director Caitlin Daly-Gonzales were scrambling to move the symphony's annual young people's concert online.

By last Friday, in keeping with Centers for Disease Control and Prevention (CDC) guidelines, the NHSO had nixed the concert entirely and cancelled all of its events through May.

Michael Singer, who serves as the NHSO's principal timpanist, noted that the timing is hitting professional musicians particularly hard. March, April, and May are often busy months for the profession, and now they are literally silent. Of four professional orchestras to which he belongs, all of them have cancelled concerts through May.

"It's going to affect people's ability to pay rent," he said. "We're going from whatever the number was [that people would have been making] to zero."

He added that he hopes the economy does not collapse as it did in the 2008 financial crisis, during and after which a number of orchestras across the country declared bankruptcy and shuttered.

"This is a longer recovery, and it's going to last months," he said. "I'm thinking about: how could this government stimulus help some of our New Haven Symphony [Orchestra] musicians?"

The symphony is tentatively still planning to hold two concerts in June, including one on the New Haven Green during the International Festival of Arts & Ideas. Both are subject to change with COVID-19 guidelines from the CDC.

In the meantime, the organization will be launching a series of online-only events with Music Director Alasdair Neale, Pops Conductor Chelsea Tipton, and other NHSO staff. An online launch party is scheduled for April 2 at 7:30 p.m.

Before that time, Neale will hold a virtual discussion and question-and-answer session March 26 at 7:30 p.m. via YouTube. To be a part of that discussion, click here.

The New Haven Symphony Orchestra is on Facebook and Twitter. To contribute to the Musicians' Relief Fund, ticket buyers can donate their tickets to this fund by e-mailing PatronServices@NewHavenSymphony.org. They can also donate directly here.