A few ears pricked up when the groups onstage started remixing Bach. By the time a sax cut into a prelude in C Minor, people had stopped their conversations to see where one composer ended and the other began. When a web of strings appeared under “Guantanamera,” hands found their way to other hands and started to swing.

Saturday night, St. Luke's Steel Band, Cuban sensation Tiempo Libre and the New Haven Symphony Orchestra closed out the 24th annual International Festival of Arts & Ideas on the New Haven Green, drawing thousands as they remixed canon with steel pan, propulsive Afro-Caribbean rhythms, smooth jazz and years of classical training. As centuries of diasporic sound meshed with 400 years of classical music, the collaboration got New Haven dancing before sending attendees off to wait for the 25th annual festival next June.

The concert, which opened with performances from St. Luke’s Steel Band and the NHSO, also marked the beginning of Alasdair Neale’s tenure as NHSO music director, a position to which he was named last July. For more on the symphony’s upcoming season, which begins this September, click here.

Taking the stage to cheers multiple times during the evening, Neale thanked New Haven for the warm welcome, introducing the symphony as musicians filed onto the space around him. As the first new music director in 12 year—he follows Maestro William Boughton—he has vowed to spend much of his first year listening to the community as he gets acquainted with New Haven. In particular, he has said he's excited to hear what community members need from the NHSO and what they want to hear more of.

Saturday he did both of those, with musical pairings that seemed as if they’d been years in the making. As last-minute concert-goers found their spots and laid out picnic blankets and bottles of wine, members of both the symphony and St. Luke’s Steel Band filled the stage, sending waves of echoing, bending and rich sound into the crowd. Back on the green, attendees nodded along, as if they were keeping pace with the group.

In a set that ran just over half an hour, the band swung from expected repertoire—members are somewhat heralded for their work ranging from Marvin Gaye to Common—to different territory with Hamden-based composer Deborah Fischer Teason, who teaches steel pan at Neighborhood Music School and St. Luke’s annual summer program. As Teason’s work unraveled onstage—an understated, creeping first movement that bloomed into a boisterous third—attendees swayed and rocked, a few getting up to dance. 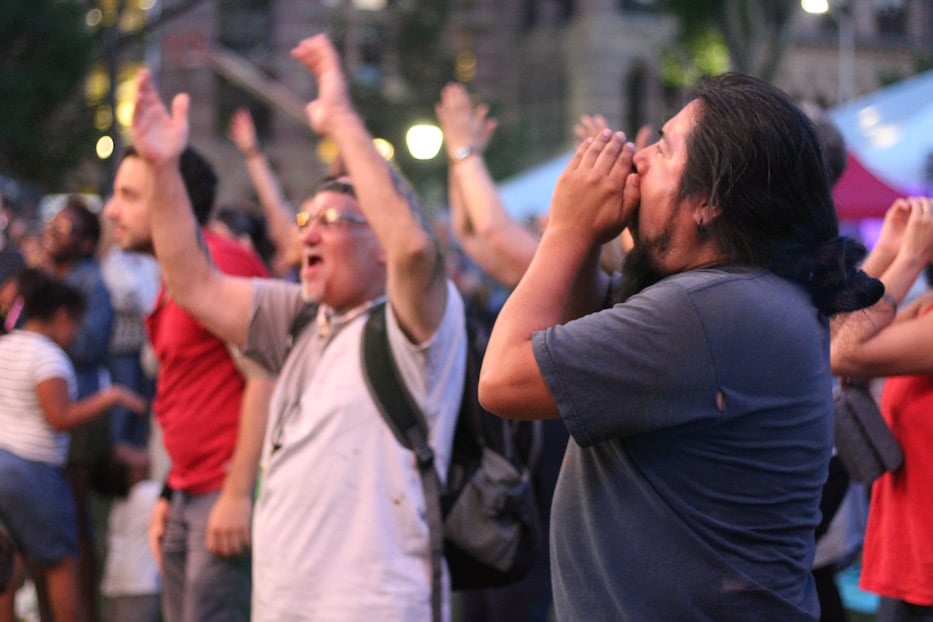 That propulsion kept flowing as dusk approached, and the hour of Tiempo Libre drew closer. When Neale walked back onto the stage, excitement already buzzed through the air. A few pint-sized dancers took their place near the front, waving their arms in half interpretive dance, half anticipation. A few attendees watched the corners of the stage carefully as the symphony lifted off, to see when members of Tiempo Libre might burst from the wings with a sudden infusion of sound.

Instead, they filtered on to applause and a few cheers from the audience. As members lifted their instruments, lead vocalist Xavier Mili introduced the group, dancing as he crossed from one side of the stage to the other and back again. In the audience, the most intrepid attendees rose to their feet, ready for whatever the group was going to whip out. The walkways across the green started filling up, all eyes toward the stage.

With the symphony taking cues from Neale, Tiempo Libre launched into “Baqueteo con Bajo Danzón” off its 2009 Bach In Havana, the familiar notes of Bach’s “Cello Suite No. 1” meeting something at once old and new. As smooth keys flowed into strings, the piece nestled into the heart of a city that has worked to bring Bach into not just its symphonic repertoire, but also classrooms and public spaces with its participation in “Bach In The Subways.”

It turned out the group was just getting started. To cheers, Mili started talking about the band’s work, where tradition and experiment frequently mingle with the classical canon. The band's founding members are steeped in that tradition: years ago they met at La ENA or the National School of Arts in Havana.

Mili gestured over to keyboardist and Tiempo Libre Founder Jorge Gómez, who plinked out the first few notes of a familiar sound—was it a fugue?—on the piano. The audience nodded along. A few people looked restless, like they hadn’t signed up for a lesson in classical music during the summer months. Then musicians started mixing it up, with a buttery, jazz-kissed sax and trumpet that made it impossible not to move.

Mili broke into a huge grin. The band snapped back into action.

“Welcome to the real world,” he said. 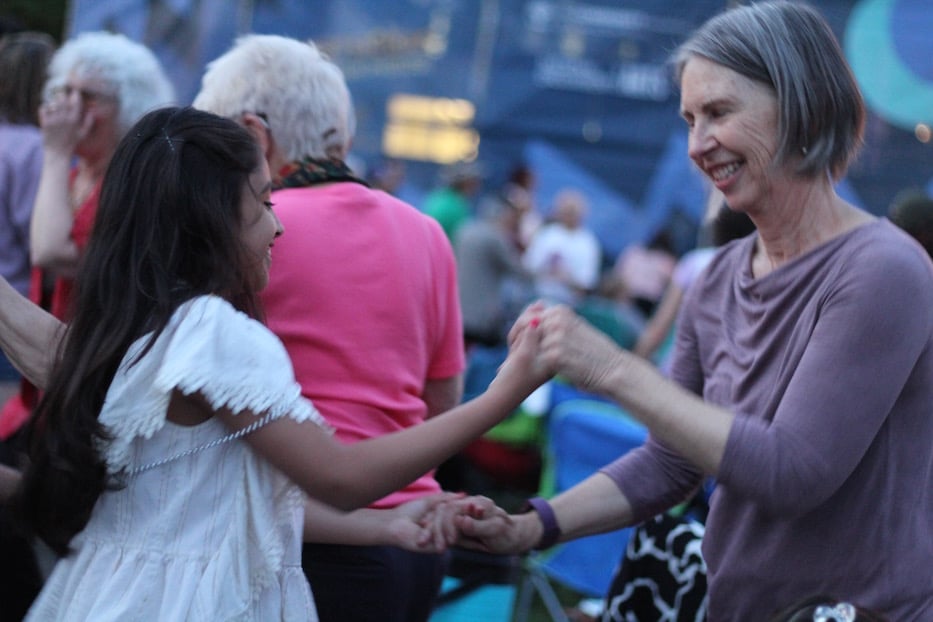 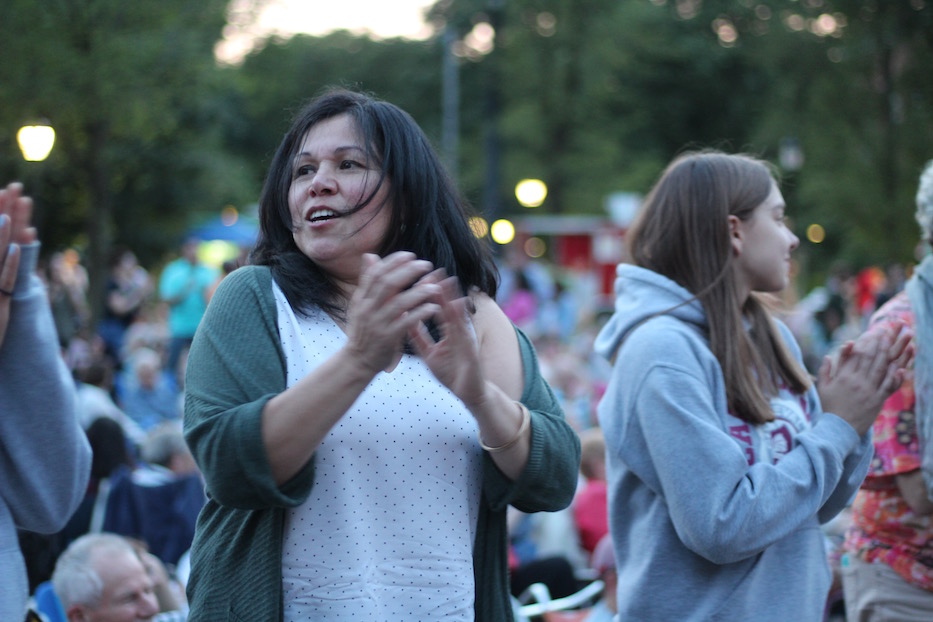 As the group and the symphony jumped through numbers, attendees rose to their feet, some dancing with complete strangers and others finding the friends they’d come out with. Others rolled to their own sort of rhythm as their arms made it up above their head. At Mili's direction, whole sections of the green moved in unison, watching him for both music knowledge and dance direction.

Back onstage, the band cycled through its repertoire, slipping in a cover of “Guantánamera” among well-worn pieces and a few more recent tracks.

As they finished and cleared the stage, Festival Co-Director Tom Griggs addressed the audience for one last time. For its two weeks, he said, the festival has been working to think about the concept of home—”where we find home, and where we call home.” One more answer had been lurking in the music.

“And that’s what this has been all about,” he said.

To learn more about the collaboration between the NHSO and members of St. Luke's Steel Band—and to get to better know Kenneth Joseph, Deborah Fischer Teason and Alasdair Neale—listen to Babz Rawls-Ivy's interview with them below. To see more from the concert, check out Tiempo Libre's backstage peek above. This comes in part through the Arts Paper's partnership with WNHH Community Radio and the Inner-City News.