Green Turns Up For The Culture 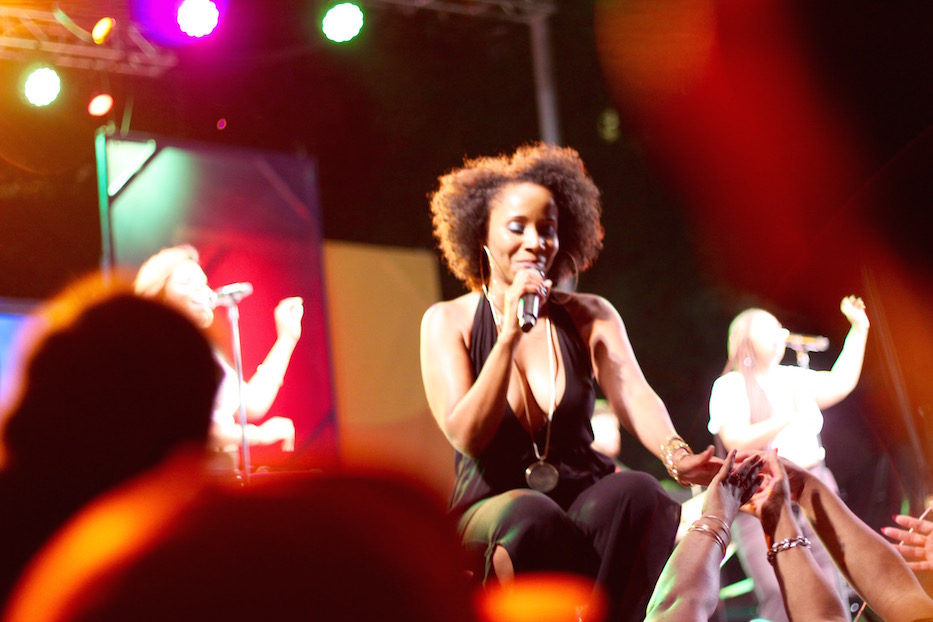 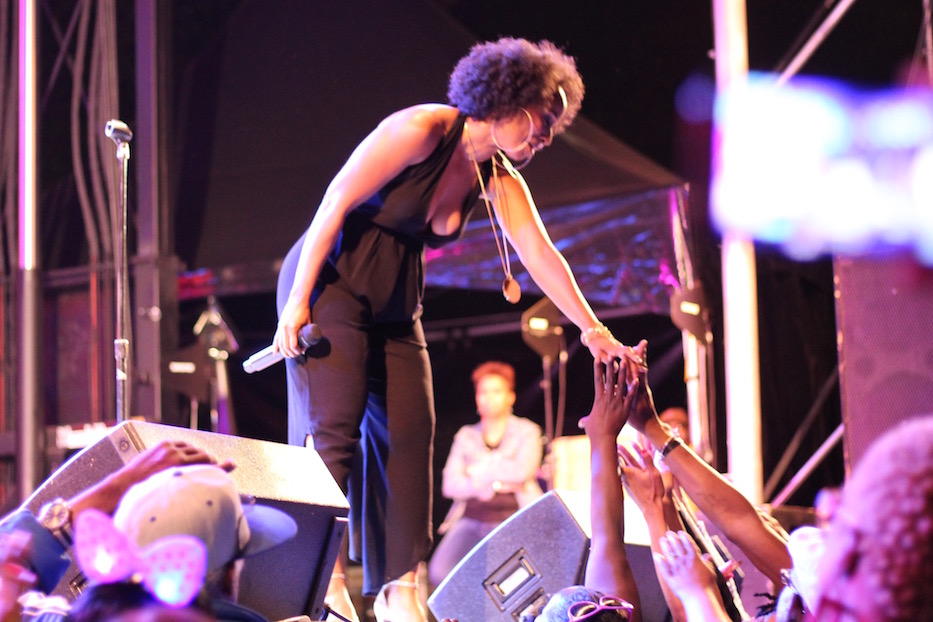 First people settled in with their lawn chairs and picnic blankets. Then they found their feet, hips, and hands. By nightfall, thousands of bodies were doing the wobble in unison. And they were just getting ready for the headliner.

Saturday, an estimated 15,000 people came out to the New Haven Green for a five-hour dance party, multi-artist serenade and DJ showcase-turned-throwback at the International Festival of Arts & Ideas. The lineup, which began with New Haven artist Trey Moore and Hartford-based singer Veronica and ended with R&B icon Vivian Green, ran from hip hop to soul to rhythm and blues to rock and roll, pop, funk and back again. 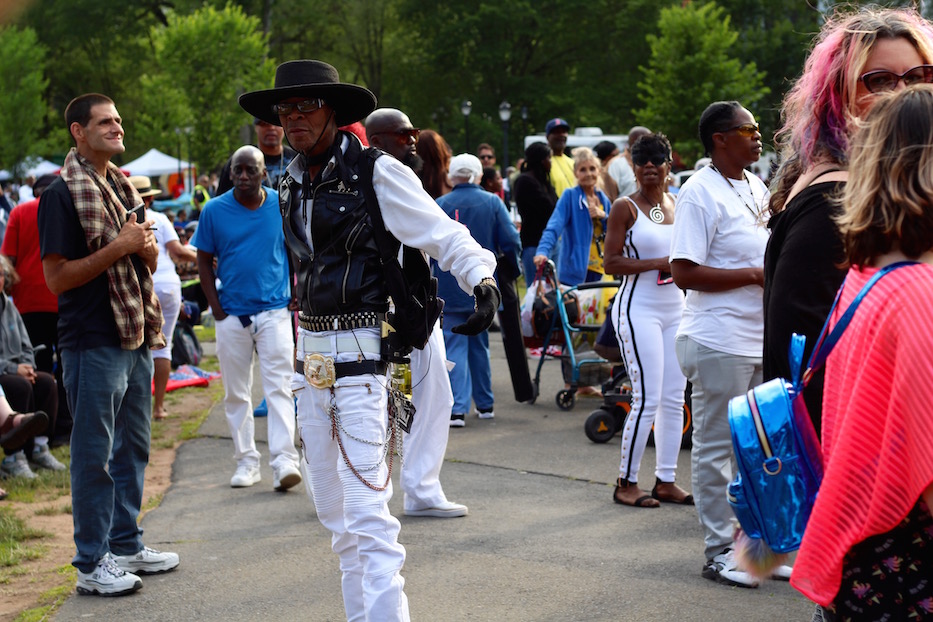 According to Festival Co-Director Chad Herzog, the concert marked the largest turnout since George Clinton and members of Parliament Funkadelic, who pulled in 20,000 people in 2016. It was co-organized by Map Entertainment and Productions, which is run by New Haven musician and Cool Breeze concert organizer and promoter Philip Bynum.

Some New Haveners started their evening early, pulling up to the Green in time to hear Moore jam with a New Haven-based crew of musicians. Born and raised in the New Haven area, Moore is completely self-taught, with a sensibility that doesn't rule any genre (or instrument, for that matter) off-limits. Even as he warmed up and went through a sound check, ears perked up around the crowd, a few pedestrians filtering in from Grove Street on one side and Temple on the other. 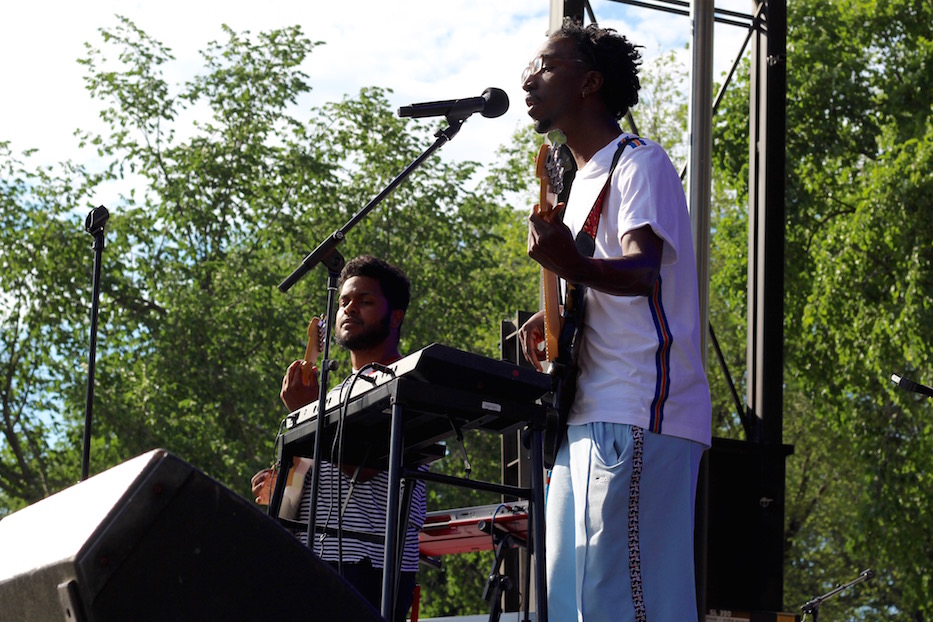 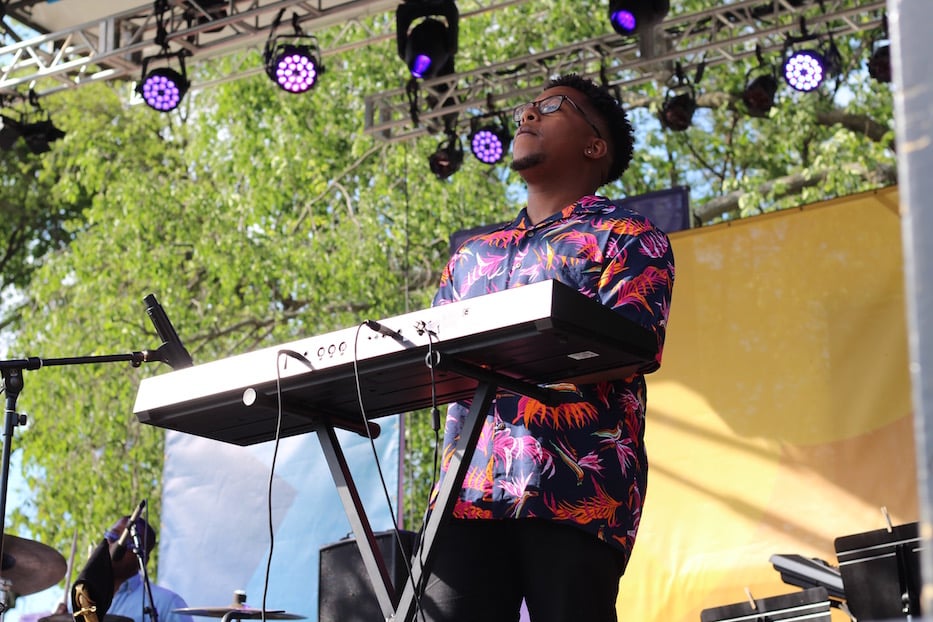 As he launched into a short but packed set, Moore kept the crowd guessing. He hopped from jammy to crooning to electric, jumping from his own discography into a cover of MGMT’s “Electric Feel” that gave the original band a run for its money.

As a mix of vocals, keys and guitar floated over the Green—I said ooh! Girl! Shock me like an electric eel!—a little girl hopped in front of the stage, lifting her arms over her head and letting the music take her away. Her skirt spun out in the breeze, an impromptu circle of strangers forming a benevolent, laid-back cypher around her.

“This is so good, it’s so good,” said wordsmith and vocalist Salwa Abdussabur, dancing with fellow spoken word artist Dyme Ellis near the stage. Abdussabur said they’ve been particularly excited for the number of local acts they have both seen, facilitated, and participated in at this year’s festival, after skipping most of the festival's events last year. 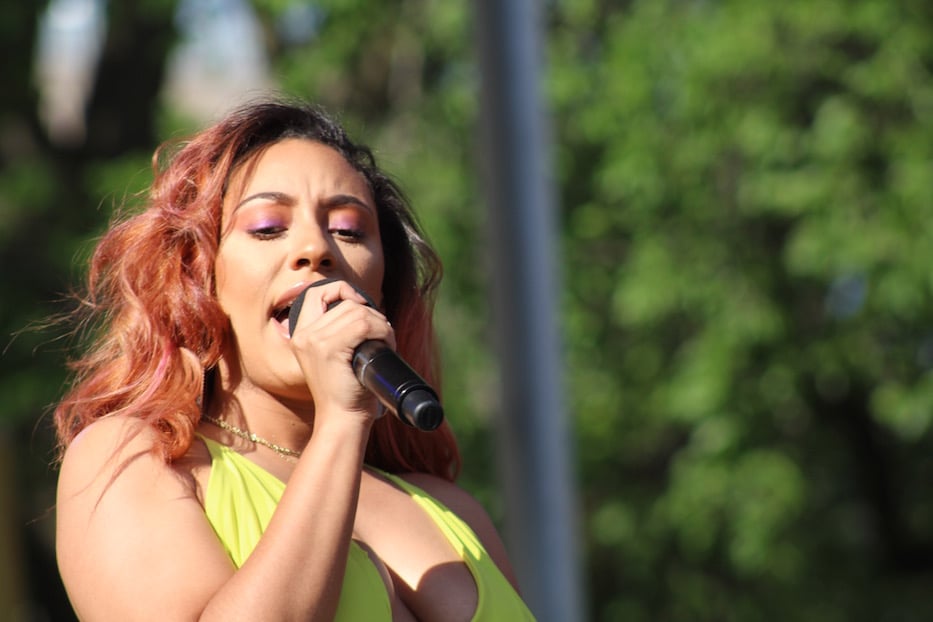 That local vibe kept going as Moore turned the mic over to Veronica, whose heartbeat-like vocals matched a series of propulsive dance moves. As her set pulled attendees right to their feet for a small-scale dance party—one of about 30 that unfolded over the course of the night—she opened the stage to New Haven DJs Juan Coon and Drake, the first of several to spin and mix sounds in a local DJ showcase.

Around the edges of the Green, families kept flowing in, finding patches of grass close to the middle, then closer to the flagpole. Suddenly the walkways were almost full too. Pedestrian traffic jams swelled and reopened again as old friends caught up and compared notes on the music. Nobody seemed to be in enough of a rush to mind. 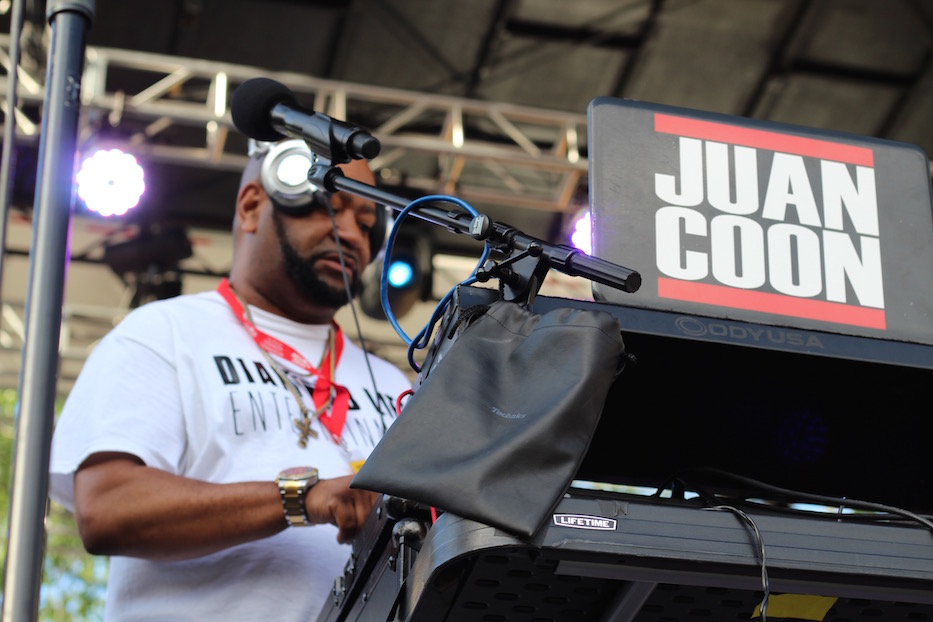 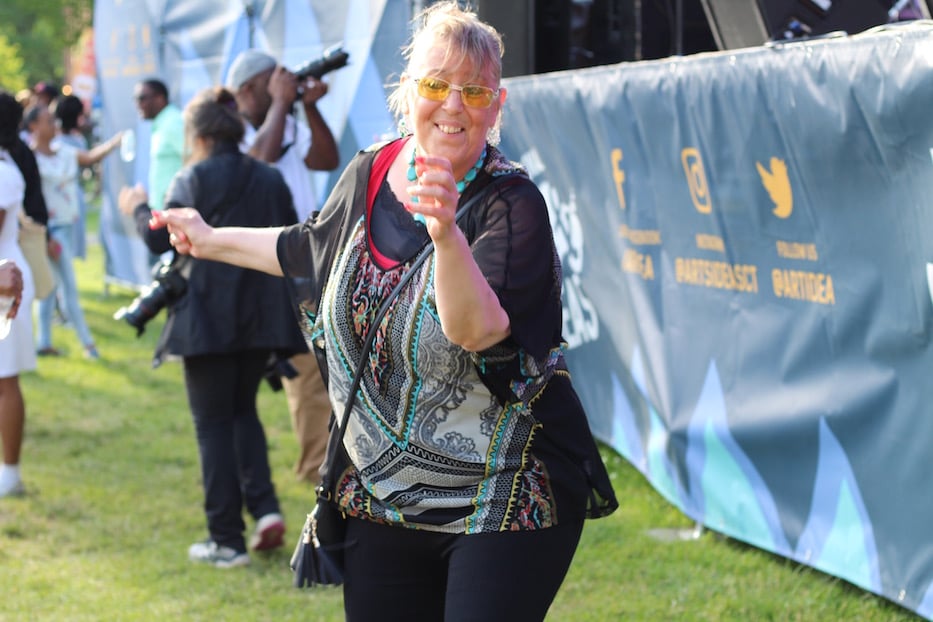 Attendees kept that propulsion going even as acts rotated on stage. They cheered for a reunion of doo-wop and soul group The Force MDs, remaining members of which are still performing. They raised the roof—or maybe it was the sky—cheering for local DJs who had made it to their biggest single audience in years. In the crowd, hips swayed. Hands clapped. As a telling line of percussion pumped out from the stage, thousands of bodies lined up to do a wobble en masse.

By the time Vivian Green walked out onto the stage a little after 9 p.m., the space was packed. Long lines formed behind food trucks parked on Temple Street, their beams of bright light meeting the multicolored whiz and whirr of electric glow sticks that multiplied in the darkness. Kids ran around dancing for their lives; couples linked arms and kissed and wandered with no destination in mind. Friends unpacked the last of their picnic dinners and bottles of wine. 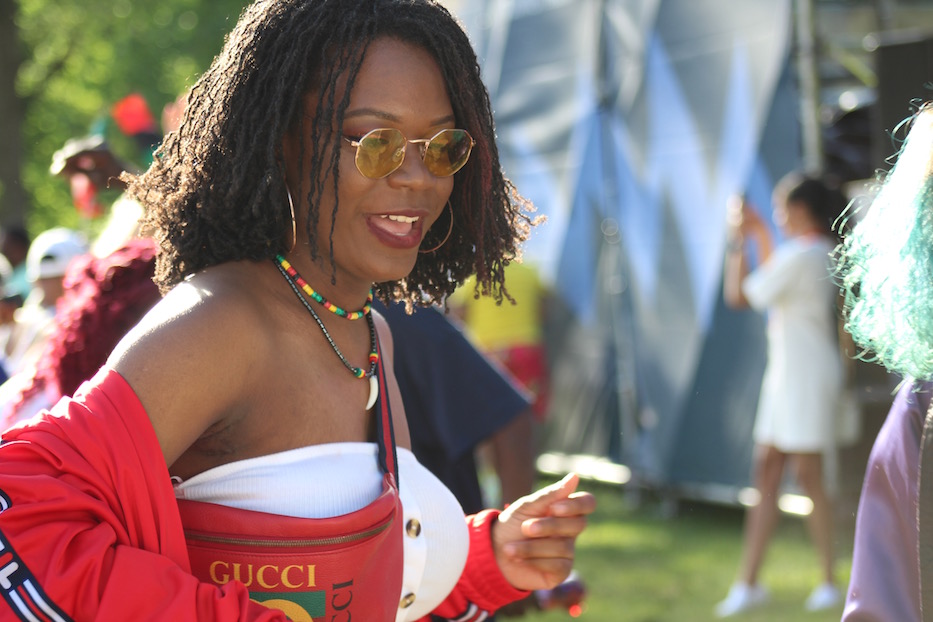 “Wow, this is huge,” Green said to the audience, who responded with cheers. After the high-energy performances of the early evening, attendees eased into her set, the satin and butter of her voice lulling the crowd into a sort of easy, sway-worthy trance.

“This is like a lullaby,” said longtime media maven Michelle Turner, host of WNHH Community Radio’s “The Show,” as she stopped to chat on a walkway that was half-filled with an impromptu reunion. Beside her, a dad hoisted his daughter onto his shoulders so she wouldn’t miss a beat. 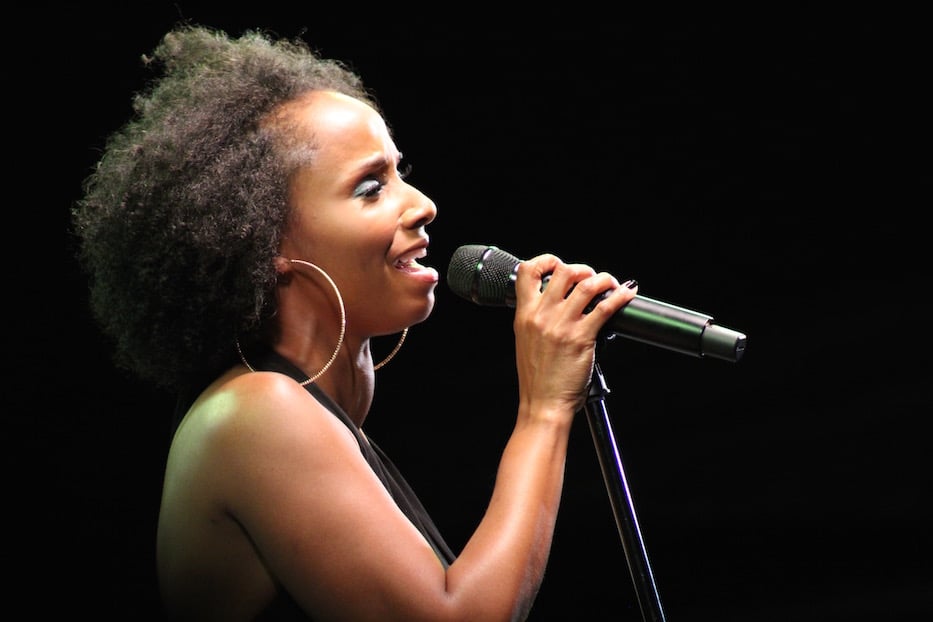 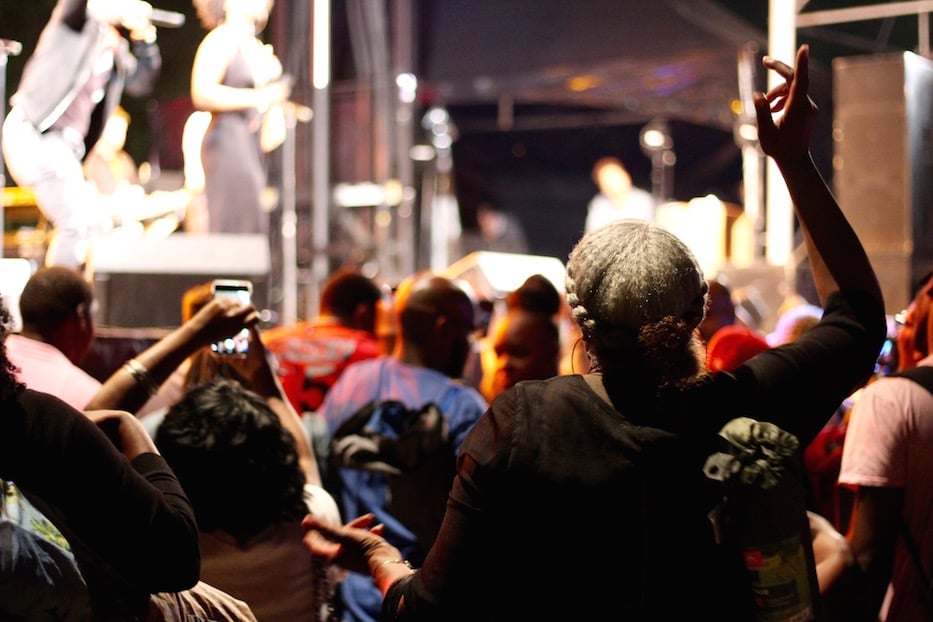 Green took the audience through a long list of greatest hits and songs off her newest release VGVI, throwing in a cover of TLC’s “No Scrubs” that got the crowd singing along in thousands of different, layered voices.

Some sung-shouted the song all the way from the flagpole, others busting out with the soulful lyrics. People slowed back down and swayed to “Emotional Rollercoaster,” some singing along and mouthing lyrics.

“Has anybody ever been mistreated, abused and stayed?” she asked close to the end of her set. Cries of yes! And mmmhmmm went up from all over the green. She launched into “Gotta Go Gotta Leave,” turning it over to fellow singers as she stepped offstage. The crowd cheered on. 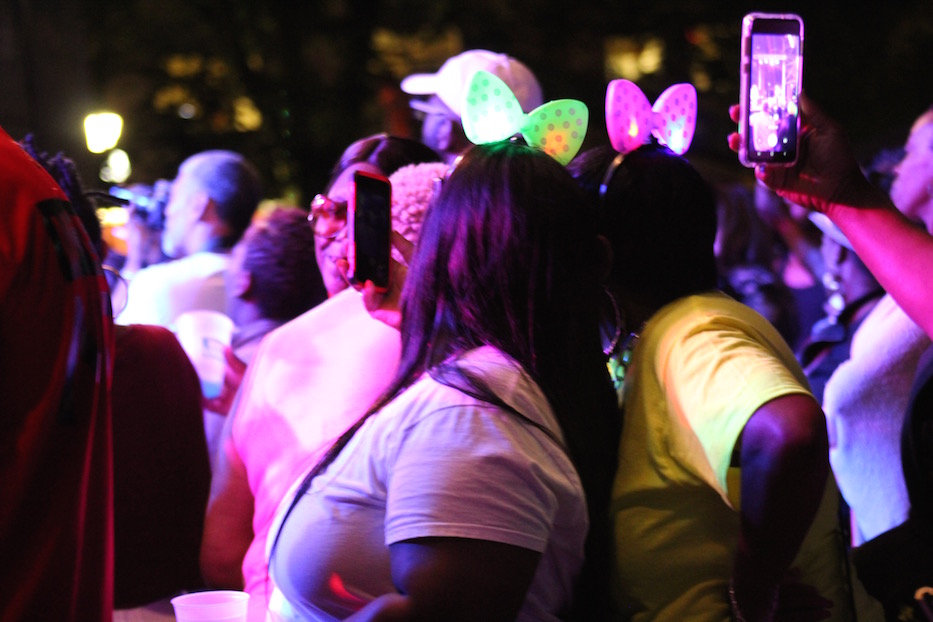 When she returned for a pared-down “I Don’t Know,” she called out to the crowd, asking them to split themselves in half depending on where they were standing. 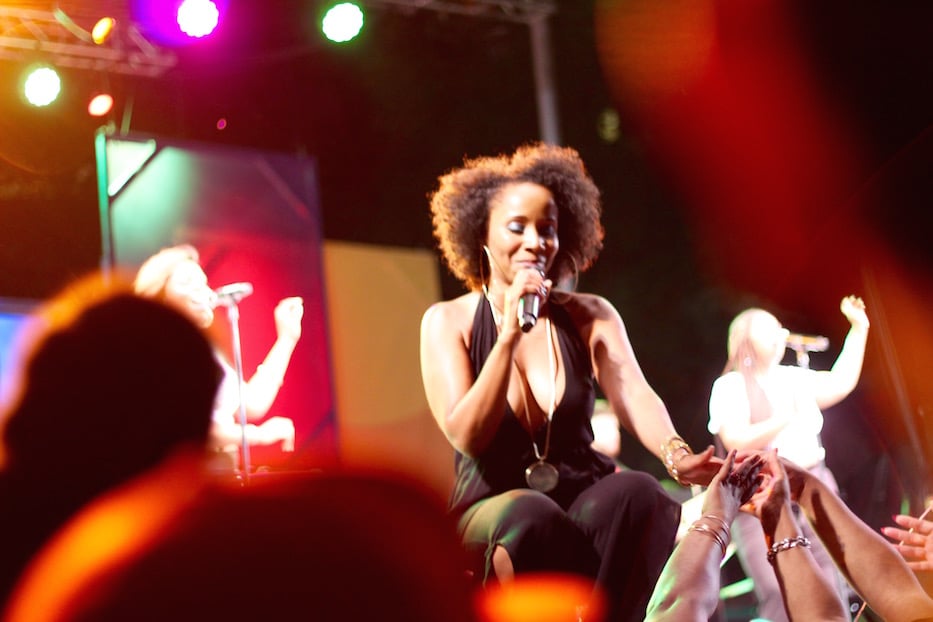 Then, suddenly, the night was over. Families moved toward the edge of the green, music still in the air. A few intrepid attendees stuck around by a special VIP tent to see if they could meet the artist. Around the green, roads that seemed to have quiet lurched loudly back to life. But no spell was broken: it stretched right on into the night.