Black Women’s Firsts: Who They Are And How They Got There 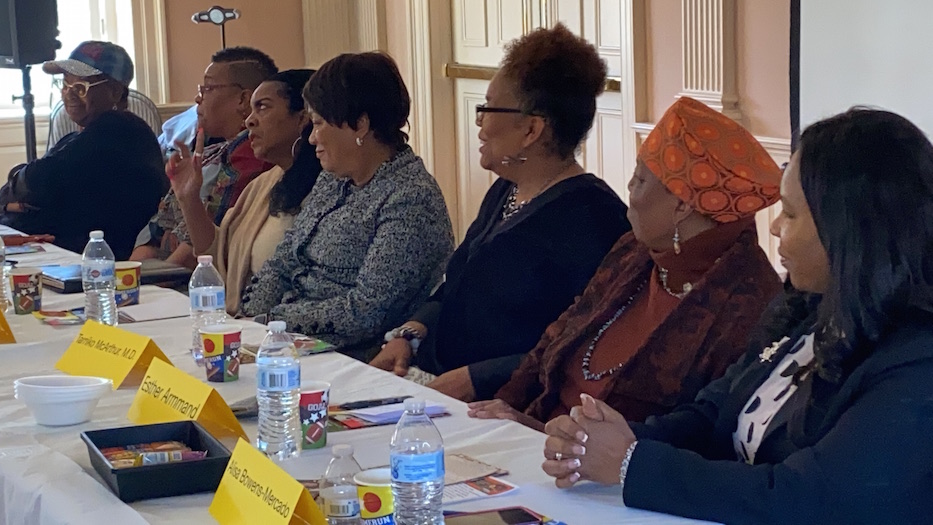 The following citizen contribution was submitted by Iman Uqdah Hameen.

From politicians to primary care physicians, from public servants to preachers, it was no holds barred from the panelists participating in Black Women’s Firsts. The discussion was presented by Urban Grants 4 Us and hosted by the New Haven Museum in commemoration of Women’s History Month.

The purpose of the event, in my own words, was to “celebrate and honor the panelists’ achievements” while “peeling away the layers to get a glimpse inside of who they really are. It was organized and moderated by Petisia Adger, New Haven’s first and only Black female assistant police chief and facilitator for Urban Grants 4 Us .

As Adger posed questions, it felt more like a long overdue lunch date between close sisters and friends.

“What is the one question that you wanted to be asked and no one has ever asked you?” she asked.

Rawls-Ivy surprised herself when she responded: no one had ever asked her why she adopted four children. In a powerful commentary, she recounted a series of unimaginable, traumatic events during her childhood. She offered that she wanted to provide love to children that would otherwise be void of it during their own formative years.

Because of her ordeal, she added, she is able to recognize that her opportunities far exceed many others. She said she needed to share those gifts bestowed upon her with others.

Brown revealed that she still carries the physical scars of domestic violence. Yet, she said, her greatest joy and accomplishment is her son born out of that relationship. Now, she is a nationally recognized librarian, whose work as branch manager at Dixwell's Stetson Branch Library helped the library win the 2019 National Medal for Museum and Library Service through the Institute of Museum and Library Services (IMLS).

She spoke on how she uses her branch manager position to help shape policies, expose issues, and develop lives, people and communities. She recalled the constant dismissal of her as a “real librarian” by patrons that frequented the downtown main library reference desk. In those instances, she said, she would gladly refer the patron to other librarians “knowing who I am and did not have the need to prove it to anyone else.”

That same prejudice arose for Jackson-McArthur, an acclaimed pediatrician and member of the city's school board. When she spoke, she recalled her experience while seeking employment in New Haven.

“I applied everywhere," she said. "No one would hire me … but my father, Milt Jackson, did not allow that.”

Milt Jackson traveled to St. Raphael’s Hospital with his daughter's resume in hand and left with employment for his daughter, she recalled. She recalled that the unspoken rule was to hire in-house, “but they needed me.”

Because she was hired by the hospital and because of her father’s love and support, she added, she will always retain the use of his surname.

When a racial epithet was used to degrade Esther’s father, he reminded her that, “it is not what people call you, it is what you answer to.” Esther’s mother, too, patiently guided her, never lecturing and always listening.

When the questioning shifted to the “lonely path women of stature take and the loss of friends because of success,” the Honorable Mayor Toni Harp (who was met with a standing ovation when introduced as the first African-American female mayor of New Haven), related that her journey started as a ward member, ward secretary, alderwoman and then state senator.

When she initially considered taking this journey, no one supported her—not even her husband, the late Wendell Harp. And yet, she was not deterred. With a big smile, she facetiously declared that “and the rest is history.”

"So what if no one sees you as you see yourself," she said. "Be who you are.”

Anderson said that when she saw that her firefighter brother had different hours from the usual nine to five, she wanted that job. She broke down doors and overcame obstacles to be the first and only black female firefighter in Bridgeport in 1994. The department had only eight women when she joined.

During a question-and-answer session, Anderson's daughter Tiffany Williams suggested that “we are women first, then Black women second.” Around her, the audience objected lovingly to this characterization. Anderson, however, responded in a good-humored manner.

“Let me be clear," she said. "That is my child. I will do everything to defend her.” She then expounded on her belief that God made different races and that being a woman is separate from that.

Bowens-Mercado delineated her life experiences and the unconventional twists she took. She started in her family’s general contracting business, an industry dominated by males. Early on, she let it be known that she wanted to work in construction and did so for 13 years.

However, on a trip to Puerto Rico, she “saw people performing a dance called Salsa.”

Bowens-Mercado took one lesson and soon thereafter opened her own school, which is now celebrating its 20th year anniversary in Westville. Later, while at a beer festival, she noticed that there was an absence of Black beer distributors. Upon research, she discovered that the brewing industry revenues were approximately $114.2 billion a year. So sge set out to start her own business, in yet, another male dominated industry.

Rhythm Brewing Co. is now the first African American female operated brewery in Connecticut and the fourth in the United States. She noted that no matter how old you may be, “whatever you do, have passion for it.”

The panelists’ overall counsel to the attendees was to take the risk of confronting your fears head on, because when we don’t face our own fears, we run the risk of self-sabotage.

This panel exchange evidenced not only that these women are multi-dimensional, Type A personalities, firsts and trailblazers in their respective fields, but represented who they are as individuals, as Black women and as women. A part two of this event is certainly warranted.

Of note: Elder Janette Parker, former CT 95th District State Representative and widow of the CT State Treasurer, the late Hank Parker, was unable to attend due to illness but was warmly acknowledged.

Brief bios of all involved can be found online at Urban Grants 4 Us. Guests were received by Urban Grants 4 Us volunteers, Ty-Zhayia Brown and Briana Williams, and the forum was hosted by Margaret Anne Tocharshewsky, executive director of the New Haven Museum.

A gracious thank you to all involved.