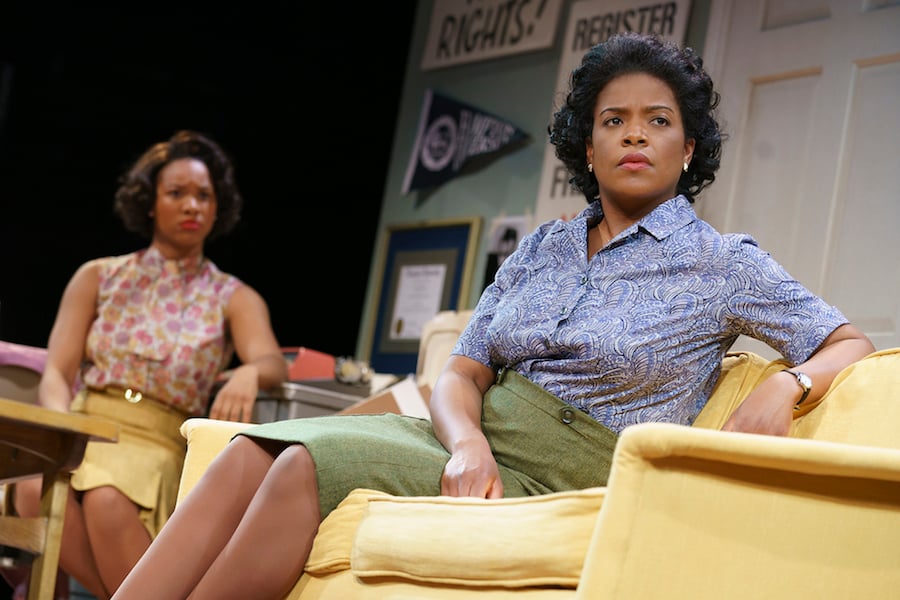 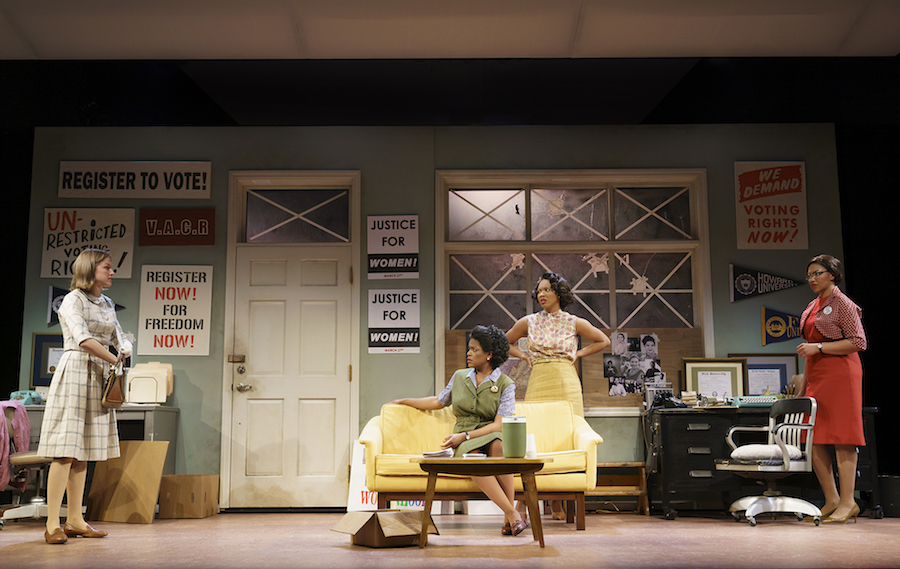 Morning in Virginia, and already the air feels combustable. Outside in the streets, protesters are holding out for segregation. Inside the Virginia Office for Civil Rights, things are falling apart. The invited speaker—who happens to be Ms. Rosa Parks, speaking out against rape culture—has been shut down by members of the local clergy. The women who organized are pushed off of the program. And they can’t agree on how they’re going to make any of this right.

Is it by grassroots action or respectability politics? Do they let these men trample them, or point out their erasure as it happens? Do they form a “Cadillac Crew” and drive the American South, risking their lives to make a point? Are we in Virginia or Connecticut? Is it 1963 at all, or closer to 2020?

The four build the backbone of Tori Sampson’s Cadillac Crew, the world premiere of which opened last Thursday at the Yale Repertory Theatre. Written by Sampson and directed by Jesse Rasmussen and Sampson, the play runs through May 18. Tickets and more information are available here.

Set in early 1960s Virginia, Cadillac Crew begins not with a bang but with the insistent click of a typewriter, as Nina Simone plays in Rachel Helen Christopher (a dynamic Chalia La Tour) all alone in the office. Nina is feeling good and so, it seems, is Rachel: red lipstick on just right, red dress pressed, not a hair out of place. A sense of history blooms around her: signs calling for voting rights and equal justice, windows with brick-sized repairs, intermittent phone calls from civil rights activist Dr. Dorothy Height.

Three HBCU flags dot the walls, casual signifiers that Black Excellence is everywhere. Rachel must be a natural leader, we think. Right? 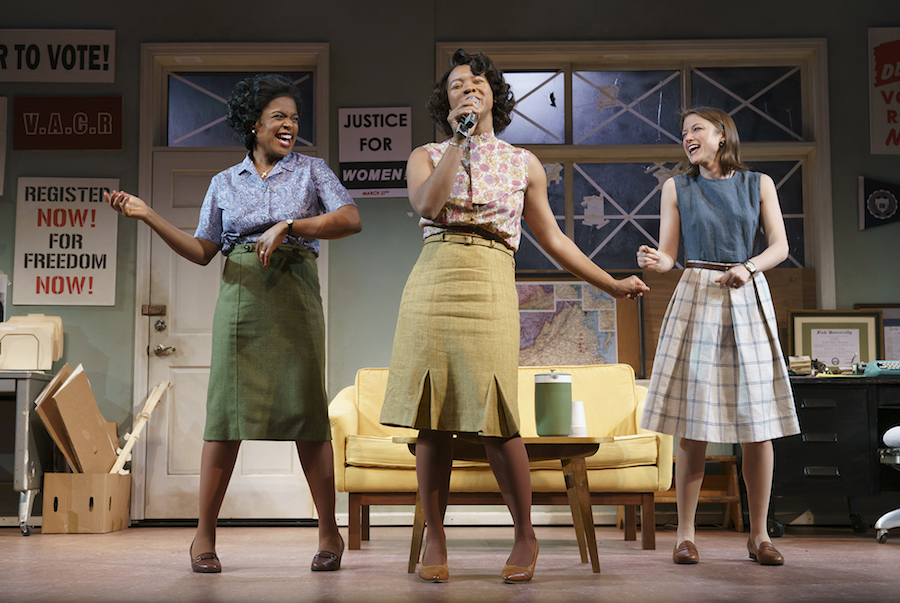 But as her colleagues arrive, that reality twists itself, revealing the compromises Rachel has made in the name of civil rights and of her own aspirations. Dee (Ashley Bryant) is a mother who fears for her daughter, but has placed her on the front lines of desegregation for the cause. Abby (Dria Brown) is a graduate of Hampton College with hopes to go into law, and a country that does not want her to get there. Sarah (Brontë England-Nelson) is the well-meaning white lady we all know—or maybe who we are—who hasn’t quite decided whether she’s an ally or an accomplice.

In the show, their sense of the fight that is palpable—as is their disagreement on how to win it. Sampson reveals that schism gradually: she gives the audience one set of expectations and then replaces it with another, leaping between locations, time periods and stakes in the process. Her exposition is sometimes heavy-handed, but it leads to magic, including a debate on intersectionality set a good quarter century before Dr. Kimberlé Crenshaw coined the term.

Are Rachel, Dee and Abby Black first and women second? Is it the other way around? What are the acceptable optics of social justice, and what do they lose in foregoing them?

“Women are supposed to be the backbone of the movement, not the foot on the neck of it,” says Dee at one point. Beyond the stage, the line falls hard on the audience—because there’s the gnawing sense that it's been said before, over and over and over again. 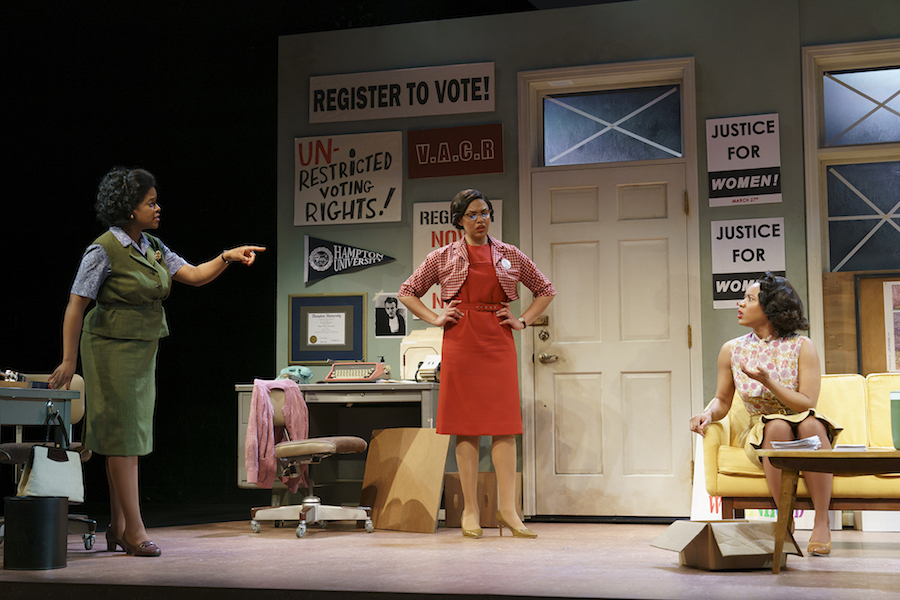 Sampson’s sense of timing is keen: arguments and laugh lines alike land with a certain weight. In a work that finds itself at multiple intersections of injustice, she has worked in admirable humor (sometimes barbed, sometimes not) and levity, a reminder that these women may be fighting for freedom, but they are also deeply human, with a love for each other that burns hard and bright and fierce all at once. Around them, she has sculpted three propulsive worlds, undoing pop culture’s obsession with racial reconciliation with something much harder, and much more necessary, to stomach.

Indeed the four, many of whom acted together at the Yale School of Drama, have a chemistry that keeps Cadillac Crew driving for over two hours. As Rachel, La Tour injects fire and heart into nearly every word that comes out of her mouth, a sort of engine that doesn’t stop even when she’s running low on gas. She has something tight and epic in her chest and she knows it, most compelling when she unleashes it at full force. Around her, Bryant and Brown are a different sort of strong entirely: concise and deliberate when they speak, and grounded in a world that threatens to yank them down. While Rachel battles the hands of history, they see if they can learn how to make it livable.

“I have thoughts for my human perspective,” says Rachel at one point, and the emotion in her voice is enough to break a human heart. “For my American perspective. No one’s going to make space for us to merge.”

England-Nelson, too, is on point as a kind but somewhat blithe partner in the fight, particularly as she barrels unknowingly through the backward politics most suffragettes hid under their bloomers. As she prattles on about the role her grandmother played in women’s voting rights—that is, white women’s voting rights—we hear echoes of much more recent news confirming that white women helped elect Donald Trump. 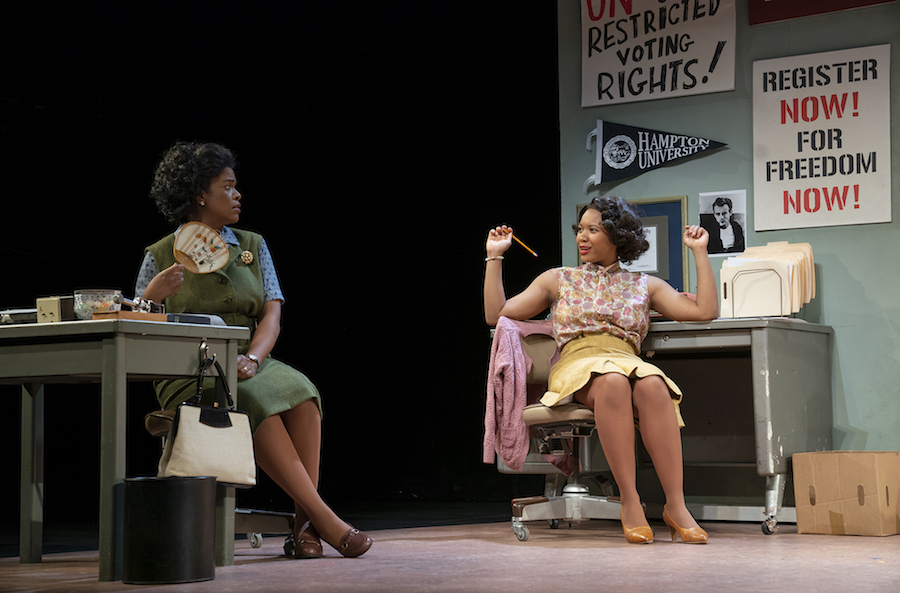 Praise to both the playwright and crew is due here. While Sampson’s script carries the show, a dynamic set from designer Jessie Chen brings it to life, turning a tiny office into an expansive open road, where a Cadillac Crew’s wildest dreams of social justice can turn deadly in seconds.

Together, Chen and projectionist Rasean Davonte Johnson drive the audience through the past, then catapult them into a rude and unruly present. Lighting designer Karen Perkins swoops in with choices that are literally sublime, framing the women as freedom fighters, truth tellers, historical icons and mere mortals all at once. Sound designer Andrew Rovner ties the timeline together, paving the show with Nina Simone, Martha and the Vandellas, The Supremes, Whitney Houston, and Missy Elliott—whose voices join Anita Hill, Stacy Abrams and Ilhan Omar among others.

Split into three acts, the show is a galvanizing call-to-arms, rooted in the erasure of Black women’s voices from the historical record. As she adds in the voices of #BlackLivesMatter co-founders Alicia Garza, Patrisse Cullors, and Opal Tometi, Sampson makes it clear that such erasure has always been a willing omission, in which historians, journalists, and even select activists are complicit. She follows that through to the end: just when history is looking up, the play closes with a line meant to gut the audience. It does, with a bright and doe-eyed eagerness that is completely crushing.

But Sampson also stakes a claim rooted in historical fact: Black women have been the backbone of every social movement in this country. When they win, all disenfranchised folks win. When they win, the universe bends back toward justice. So audience members can choose: how do they want to shape their present? Do they want to march forward, or keep holding history back? Will they champion the words and voices they hear calling for change, or take credit for the message themselves?

In New Haven, the story resonates far beyond Yale’s stage, where the realities of erasure remain fresh and sometimes searing. In late April, the New York Times published an article on recent protests in support of Stephanie Washington and Paul Witherspoon, victims of an officer-involved shooting in the city's Newhallville neighborhood.

In the article—and the sharable thumbnail image—was a photo of clergy members who had called for organized action, but wanted to wait until after Easter, their busiest day of the year. As they prepared to tell the resurrection story in their churches, Black women started organizing in the streets. And yet, the piece included no mention of Kerry Ellington, Ashleigh Huckabey, Black Lives Matter New Haven Co-Founders Ala Ochumare and Lauren Pittman—the women of the movement who left their homes the night of the shooting, and kept protesting right through Easter and the week that followed.

Back at the Rep's Chapel Street theater, Sampson sticks an ending that media outlets, writers, and biographers have largely failed to cover and champion for hundreds of years. It doesn't feel finite, so much as an invitation. In the dark, just before the applause starts, attendees are left to decide: which side are you on?