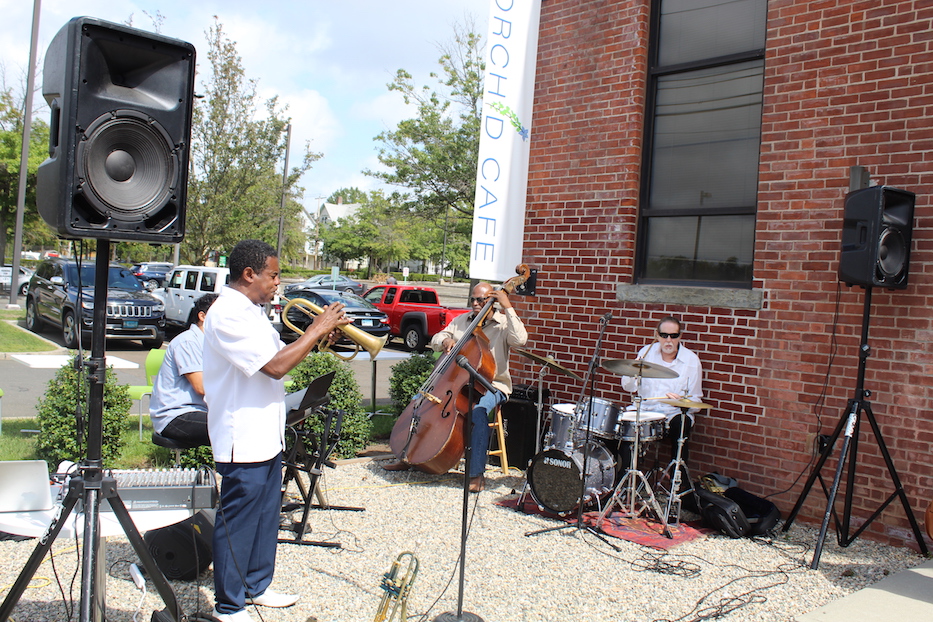 Mike Carabello was deep into his composition, Peace. The piano notes picked up bit by bit, but the musician never rushed them. They became sparse and released the build up, almost like exhaling. Morris Trent plucked on the double bass and filled the outdoor patio with deep, slow contrasting notes.

Sunday, the William Fluker All Star Jazz Band performed on ConnCAT's patio as part of its ongoing Sunday Jazz Brunch series. The series brings together local and regional musicians and ConnCAT's own Orchid Cafe, an offshoot of its culinary arts program. It implements social distancing and COVID-19 compliant regulations.

The band consists of core members William “Bill” Fluker, Morris Trent, Mike Carabello, and Barry Reis, as well as different members who join in each show (Fair Haven School teacher Dan Kinsman made an appearance at one point). Performers and diners gather on the cafe’s outdoor patio, which looks out Winchester Avenue in the city’s Newhallville/Science Park neighborhood.

“It is a place for people from all over the state to collide and share food with one another,” said ConnCAT President and CEO Erik Clemons. 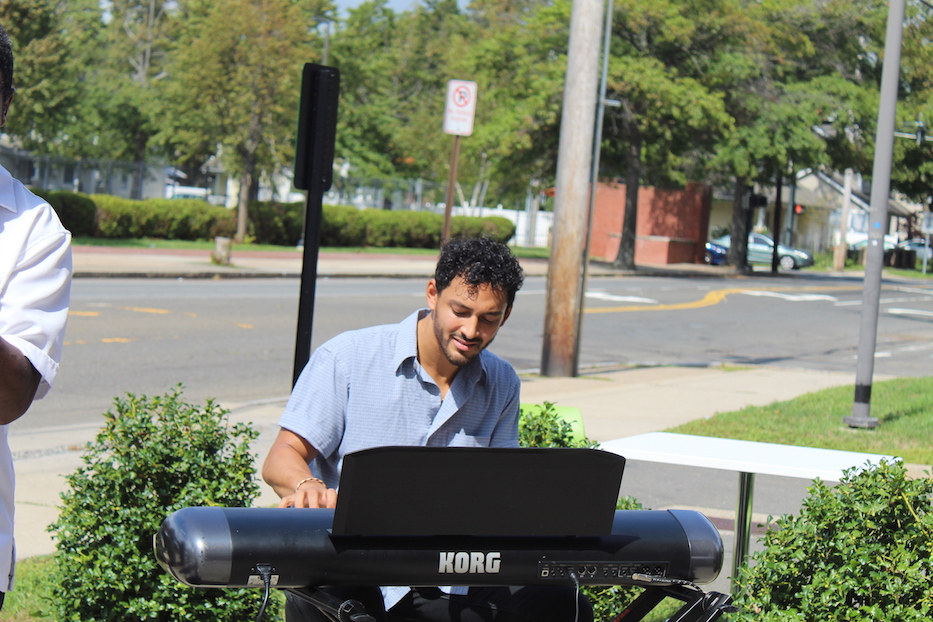 For Clemons, live jazz at the cafe has long been a part of his vision for the center, which this week also opened its “safe space” for students struggling with remote learning. Clemons and the ConnCAT team first launched the cafe in 2017, as an incubator for students in the school’s culinary arts program.

Last year the cafe changed its menu and added a patio, as well as a new satellite location at the New Haven Free Public Library. It is now operated by ConnCAT’s jobs-based subsidiary, the Connecticut Community Outreach Revitalization Program or ConnCORP.

The cafe, like the building that houses it, is based on Bill Strickland’s model for the Manchester Bidwell Corporation in Pittsburgh. Strickland himself is a jazz fan and cultivates orchids; Clemons decided to honor that legacy by having jazz played outside the cafe.

Sunday’s event brought people from Norwalk, Bridgeport, Stratford, and New Haven, all visiting to try New Orleans-style shrimp and grits and chicken and waffles. As music played, friends and families caught up about cousins who had moved away or family they wanted to see once COVID-19 restrictions are lifted. 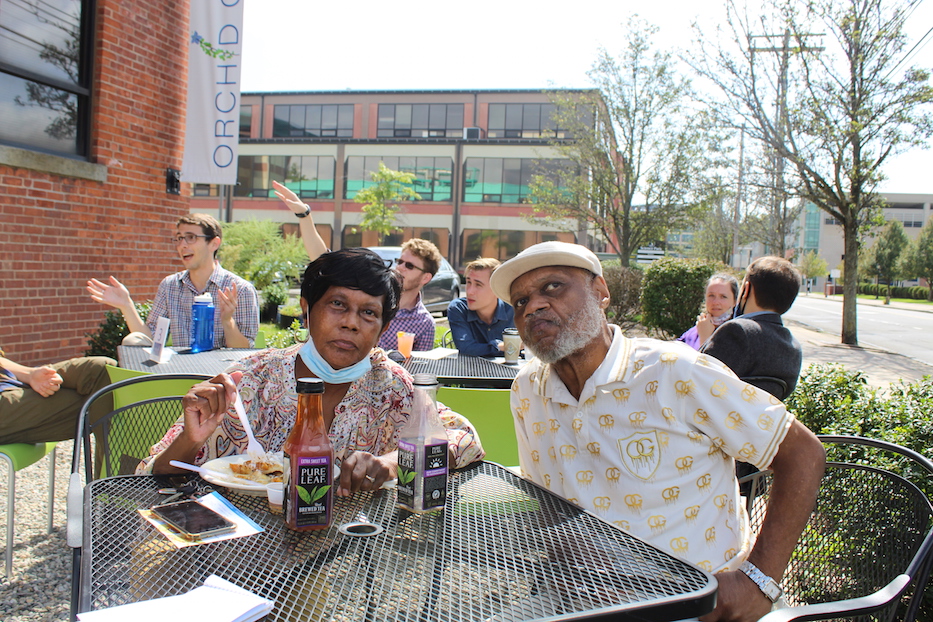 Some were young faces who came to listen to the music their parents and loved ones listened to. Others were residents of the city who’ve been lifelong jazz enthusiasts.

Many New Haveners came out to support the local business and see familiar faces. Alice Douglas brought her brother, Toby, after having a positive experience at an earlier jazz brunch. She called the jazz band a welcome break from the usual offering of outdoor music events she sees around town.

“There is so much hip-hop out there, “ she said. “It's just nice to settle down and listen to some jazz.”

On stage, Reis picked up the atmosphere by playing some punchy measures filled with quick decrescendos and crescendos. Trent matched the energy, plucking quickly on the double-bass the whole time with a smile.

Fluker, the leader of quartet, has a long history with jazz. He has played with Jackie McClean and been mentored by Wallace Roney. He believes that these events are an opportunity to keep the tradition of jazz alive and share its history, in which New Haven is steeped, with younger generations.

“I teach jazz and history at Davis Street Magnet [School],” he said. “The kids that don’t know their history, we can show them how we evolved to now.” 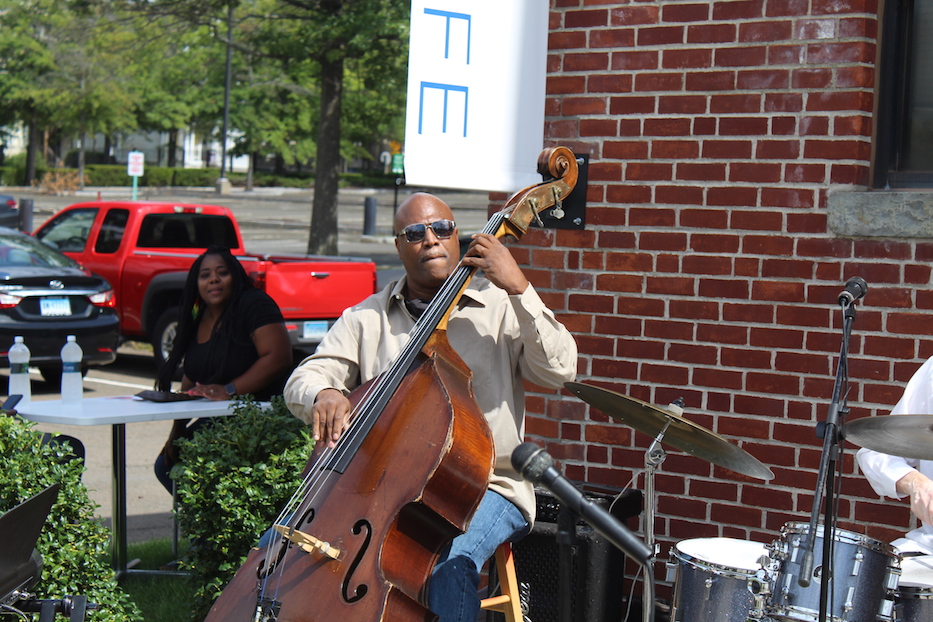 Morris Trent, the double bass player, grew up in New Haven playing with the Buster Brothers. Due to COVID-19 restrictions, he has seen a decrease in business, particularly for live performances that would have been held indoors indoors. He praised collaborations like the one with ConnCAT, noting that it is a way to support local musicians during a financially difficult time.

For Ashley Clayton, the jazz brunch marked her first public outing since the beginning of quarantine. She had been hesitant about venturing out in public, she said—she still has health concerns around COVID-19. Ultimately she felt comfortable with the cafe’s outdoor venue and the extra windy Sunday weather. To mark the occasion, her friend Danica Kelly brought her own flower arrangement for the table.

“The way my skin feels warm, is how my spirit feels,” said Clayton.

Both of them were drawn to jazz because of personal connections, they said. Kelly grew up with her parents playing jazz all the time. Clayton’s husband is a huge fan, and she’s become one as well. As they chatted, Fluker mellowed out the atmosphere with some slow and slurred notes on the flugelhorn.

“We’ve lost so many of these opportunities. I feel like this is for a different community,” Kelly said. “It is family oriented.” 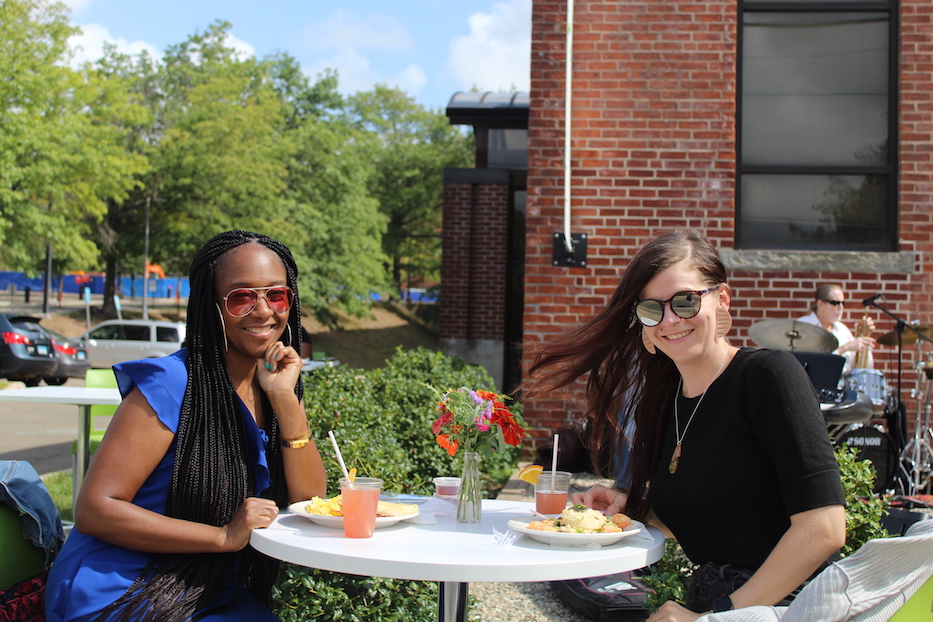 Clemons explained that being able to have the cafe open in the midst COVID-19 is nothing short of a miracle. When they are at work, culinary students wear masks and sanitize constantly, the latter part of which has always been the case. As long as the cafe remains open, it can continue to employ its workers during the COVID-19 pandemic, as unemployment soars elsewhere in the city and across the state and country.

One of those recently hired workers is Nia Harmon. She said she was grateful to find a weekend job to supplement her job at Yale New Haven Hospital. She was also thrilled that the cafe chose to play jazz because she and her best friend had bonded over the music just two weeks before being hired.