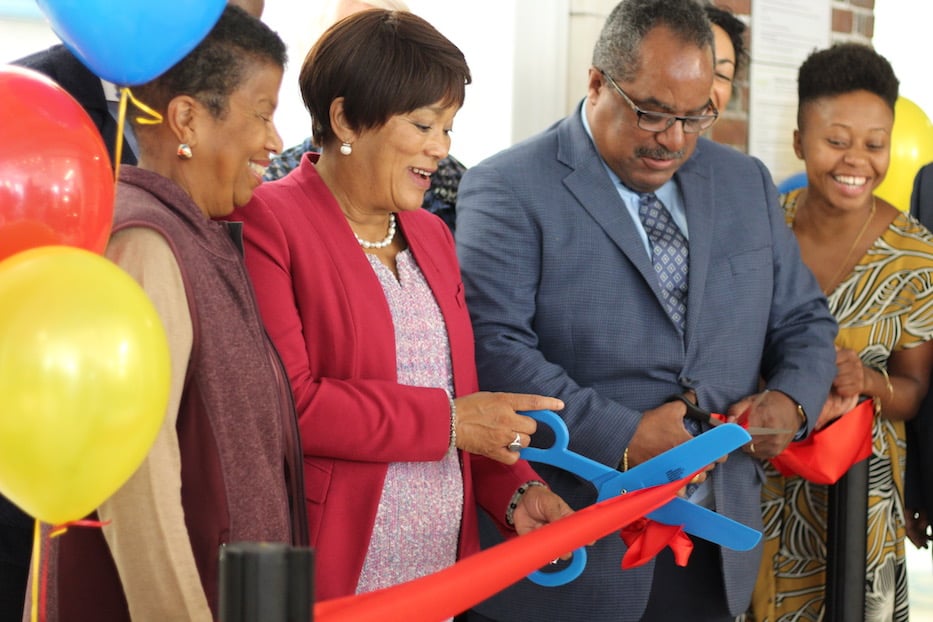 A Science Park jobs incubator has officially settled in downtown, growing its mission of employment, training, and professional development through a tasty new partnership with the New Haven Free Public Library.

That incubator is the Connecticut Community Outreach Revitalization Program (ConnCORP), a jobs-based subsidiary of the Connecticut Center for Arts & Technology or ConnCAT. Monday afternoon, freshly-pressed paninis, bright fruit smoothies, and firey jazz marked the official opening of its Orchid Cafe on The Green, one month after the spot soft opened in early August. At a ribbon cutting Monday, ConnCORP President and Chief Executive Officer Paul McCraven called the pairing “right up our alley,” with an emphasis on job skills, culinary arts, and lifelong learning. He thanked City Librarian Martha Brogan and NHFPL Board Chair Shana Schneider for encouraging ConnCORP to submit a proposal for the space earlier this year, after Whole G Cafe and Bakery ended its contract with the library.

“We thought our mission lined up well with the library’s, and we’re very excited about doing it,” he said, adding that the opening comes during a “really strong growth period” in which ConnCORP has been able to hire 21 people in the last several months. In addition to Orchid Cafe on the Green, ConnCORP is poised to open an Ashmun Street market and pizza spot called Petals in the next several weeks. 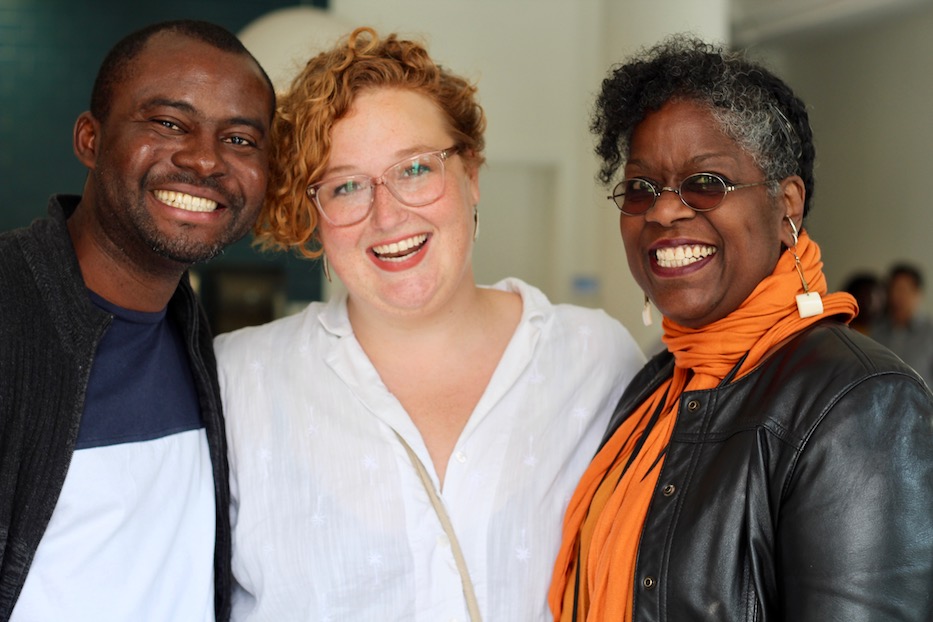 The cafe, which marks ConnCORP’s first location outside of Science Park, operates on roughly the same schedule as the library, with a menu that offers hot and cold food, coffee and tea, smoothies and several sweets. While its sandwiches, wraps and salads are prepared daily by ConnCAT Culinary Program grad Tyrone Jones, most sweet treats come from from Junior’s Cheesecake and Hamden-based bakery Bread & Chocolate.

“Being in this space and running it in partnership with the New Haven Free Public Library, it means a lot,” said Food Operations Manager and LoveFed Initiative Co-Founder Raven Blake, who has also supervised a recent transformation of Orchid Cafe’s menu and hours in Science Park. “With what ConnCAT and ConnCORP stand for, it’s amazing to be in this space … we’re definitely grateful to be in this space and have it serve community, to provide food to people in a loving way.” 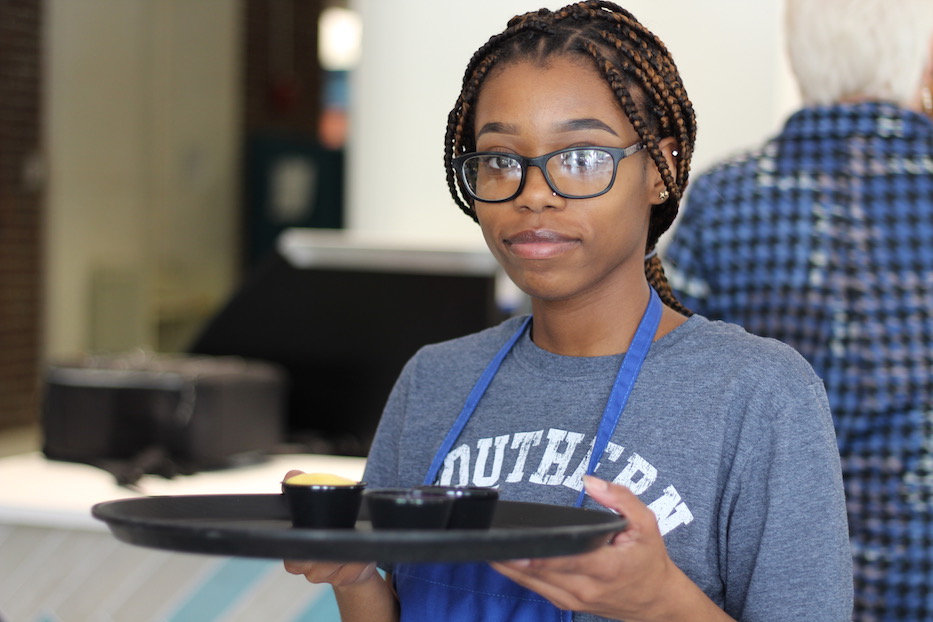 “Come to this location!” she added, encouraging attendees to come to the cafe, spread the word, and think of ConnCAT for catering needs. “Come support these businesses. Help community to thrive. Because, what you put your dollars to really speak to a lot of things. It’s like voting, right? You vote with your dollars. You support what you care for.”

In the cafe, attendees celebrated with bite-sized samples of turkey and caprese paninis, still warm and dripping tangy-sweet balsamic vinegar from the sides. As Jones churned out sandwiches on the panini press, new staffer Taijzeeaunna Kelley-Anderson (pictured above) wove through the crowd handing out shot-sized samples of cold fruit smoothies. 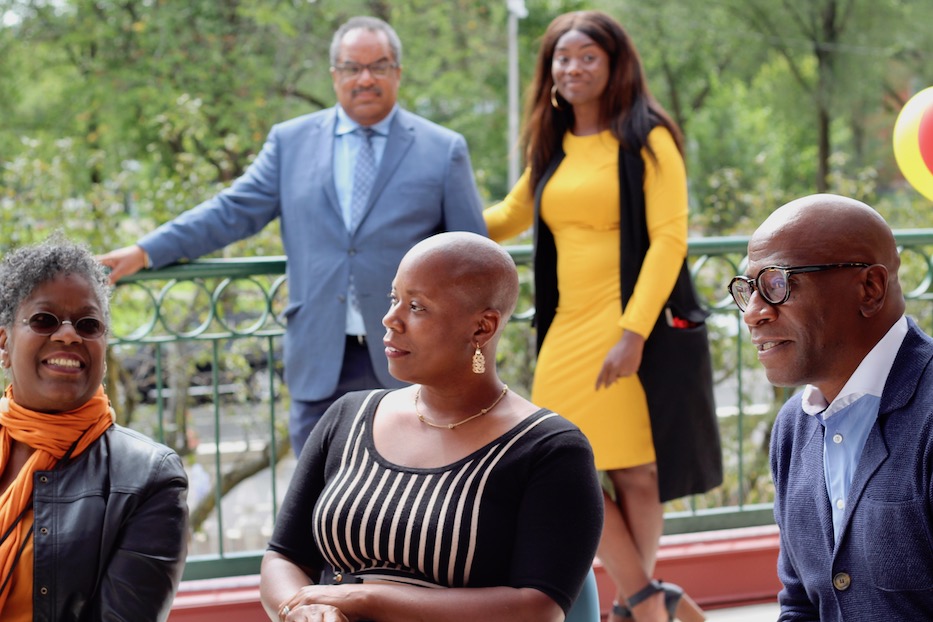 While she has only been working at the cafe for three months, she first became familiar with Orchid Cafe while working at ConnCAT as a tutor in its growing after-school program. She said she’d enjoying the job because it teaches her new skills in hospitality and food operations.

Outside, the Bill Fluker All-Star band was taking attendees to church on the newly reopened patio, which is set up with tables and chairs for library patrons to meet and work outside. As they launched into “Take The A Train,” ConnCAT President and CEO Erik Clemons bobbed back and forth to the rhythm, trumpet and upright bass floating out onto Elm Street.

A few new faces trickled out onto the patio with coffees and huge cookies studded with chocolate chips. The party, it seemed, was just getting started.