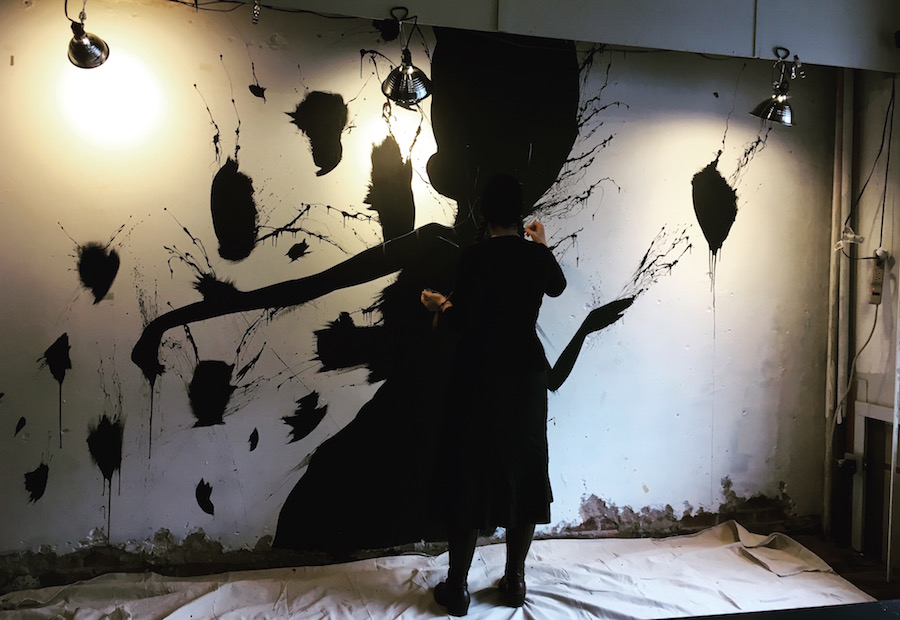 A figure rises up, her flat black outline stark against a white wall. Her arms press out, angular but soft-looking at the same time, with slender hands that dissolve at the tips. Her head tilts gently to the left. White wisps work up through her chest, arms, shoulders and neck. Black splatters and paint drips fill the space around her, soft and smudged at their edges.

Come closer, she says, without ever having to speak at all. I'll be gentle, I promise.

She’s a creation of international muralist Faring Purth, back in New Haven for the first time in two years to paint a mural at Lotta Studios in the city’s Westville neighborhood. After first coming to the city for a commission in 2016, Purth made her way back earlier this week, to visit friends she’d made during her first stay here, and add another of her pieces to New Haven’s public art landscape. She plans to unveil the mural Saturday evening, at a pop-up and community gathering that runs from 6 to 9 p.m. For details and more information on the event, click here.

Purth, 35, is a muralist who has left her mark around the country and the globe, making stops in San Jose, St. Louis, and New Haven—among hundreds of other cities—during a total of 25 road trips across the United States, and more around the world. Born to organic farmers in Southern California, she said she credits a largely nomadic lifestyle in childhood and adolescence with her global approach. In under four decades, she has completed over 400 murals around the world. 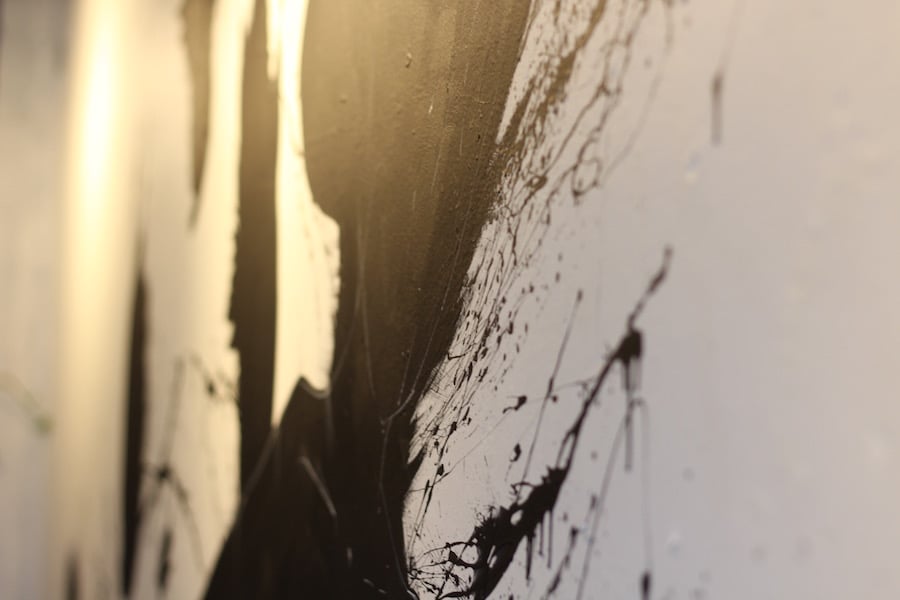 From California, she has also called Italy, France, and Missouri her home, moving most recently to the Catskill Mountains in December of last year. There, she lives with her husband, the artist Raven Fox, in a cabin once occupied by the Mexican poet José Juan Tablada, who entertained Mexican artists Diego Rivera and Frida Kahlo during one of their stays in New York.

Purth considers herself an “intuitive artist,” she said in an interview midday Friday at Lotta. When she’s getting ready to do a mural, she doesn’t work from preliminary drawing. Instead, she spends time with the wall she’ll be working on, waiting for shapes, cracks, raised spots and imperfections to reveal themselves in the concrete, plaster or brick. She names the figures only after she is completely finished, and placed eyes on her figures.

“Sometimes I can actually see forms coming out of the surface texture of walls,” she said. “And I let the piece evolve naturally. So, a lot of the time, meaning for me doesn’t come out until the very end.” 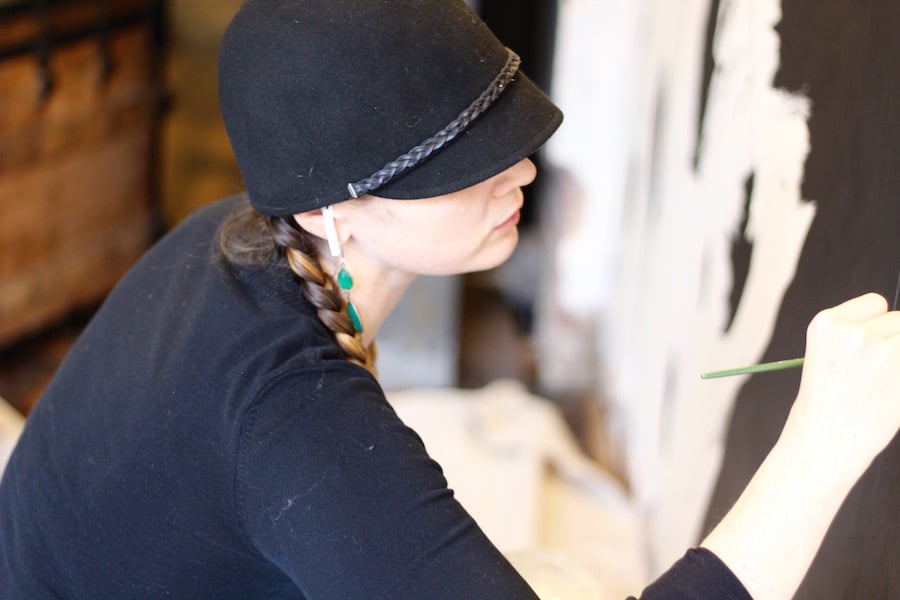 In recent years, the Elm City has begun to play a role in that process. While she was exhibiting in Boston, Purth met New Haven sculptor Silas Finch, who introduced her to several New Haven artists. Two years ago, when she was still living in St. Louis, she received a commission from the Westville Village Renaissance Alliance (WVRA) for a mural in the parking lot at Valley and Blake Streets, now titled “As In The Light Of Mariellle.”

In the work, completed in July of that year, Mariellle stretches out, her arms raised in a gentle V above her head. Below, her body stretches out in brilliant color.

During those two weeks in the city, Purth said she fell in love with New Haven. Westville, in particular, called to her—she became fast friends with artists George Corsillo and Susan McCaslin, who own the film Design Monsters, and with Lotta Studio founders and owners Mistina and Luke Hanscom. No sooner had she left, she said, than she was thinking about how to get back.

"The individuals that we met were so sweet and warm-hearted and the city itself is so lovely," she said, adding that she and Fox had even talked about moving to New Haven at one point. "It's not an overwhelming city and it's got a lot of diversity ... I just really appreciate the scale and the community." 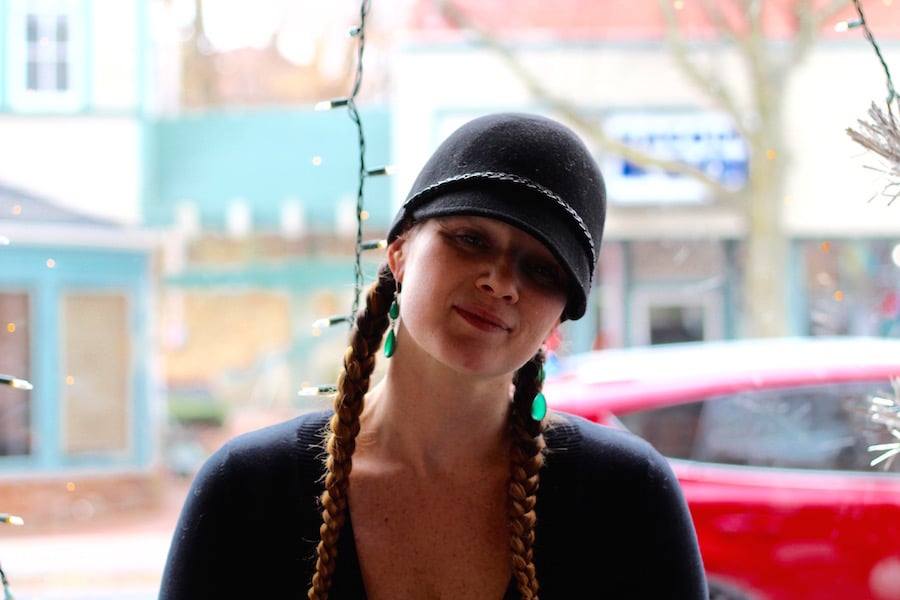 So when Mistina Hanscom reached out to her about a wall at Lotta, she cleared her schedule for a few days in December, arriving Wednesday night and ready to paint by Thursday morning. When she paints, she plugs her headphones in to tune out conversation around her, listening to performances from NPR’s Tiny Desk Concerts. Purth said that painting in the space has felt like a homecoming.

“I feel almost guilty that it took us so long to drive out here, but now that we have it’s so wonderful,” she said. “It feels great. I really love it here, and I want to come back more often.”

Watching the artist paint Friday afternoon, Mistina Hanscom said she’s thrilled to have Purth back in the area, and wishes she could keep her beyond Sunday, when she and Fox head back to the Catskills. She praised the artist’s humility, noting the lack of pretension with which she conducts herself.

“I adore her so much,” Hanscom said. “I adore her as a human, as an artist … she’s just an extremely tender soul who does beautiful work.”

“I just feel such a connection to her work,” she added. “It just has emotion to it that I can relate to without having to find the word to describe it.”