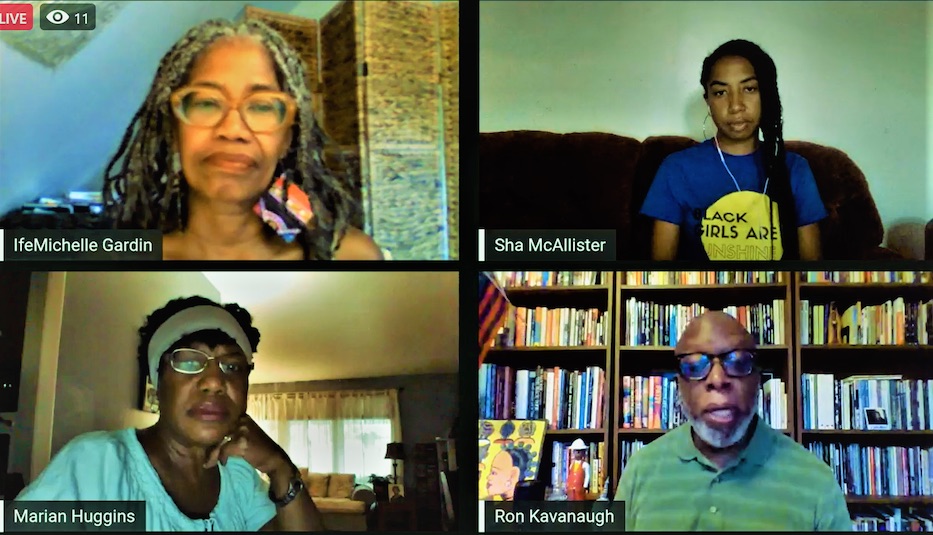 One book club attracts avid readers ready to dig in. The other lays its members a reading foundation. They approach the same goal: sharing literature of the African Diaspora with readers who may not see themselves reflected enough.

Kavanaugh is the founder of One Book One Bronx, a book club based in Bronx, New York. The club is a subsidiary of his community-led nonprofit, the Literary Freedom Project. Both programs cultivate and promote literature from authors that reflect the Bronx’s majority Black and Latinx population.

Meanwhile, Huggins leads the Urban Life Experience Book Discussion Series, a book club she launched in 2015 at the Wilson Branch Library in the Hill. At the time, she served as Wilson’s Community Outreach Librarian, a position that also included film screenings with Project Longevity, SURJ (Standing Up for Racial Justice), and Public Humanities at Yale Democracy in America programs.

She recently became the Branch Manager at the Mitchell Library in Westville. When she holds the book club, she selects novels for her attendees that mirror the Black experience locally, regionally, and nationally.

“I was fortunate enough to have a family of educators that focused on literature, especially Black literature,” Gardin said. “I wanted to ask y'all—When you were in grade school and high school—was there somebody to introduce Black literature to you?”

Huggins paused before she answered. While the library was a constant presence in her life, she explained that she “probably didn’t know there was such a thing as Black literature”—she wasn’t given a chance to explore Black literature in elementary through high school. She was 18 years old the first time she read a novel by a Black author.

That novel was Song of Solomon by Toni Morrison. It was one of those days Huggins went to the library to “pick out anything she saw” on the shelf, thinking nothing of it. She opened the novel’s first page in the afternoon, and by the time she looked up again, it was midnight. She needed to sleep. Huggins went to her bedroom, flicked off the light, got into bed, and closed her eyes.

Morrison wouldn’t let her sleep that night, though. Huggins tossed and turned. She saw the protagonist, Milkman, trace the woods in the Southern heat. She heard the wise words of his aunt Pilate, a woman with her eyes fixed beyond a mortal veil. She tensed against Guitar Bains, a man so focused on vengeance his blood ran hot.

Huggins was restless. She jumped out of bed, flicked on the light, and read until five o’clock in the morning. She has read Song of Solomon four times since then.

“As a young person, I didn’t worry about Milkman and his Aunt Pilate,” Kavanaugh said. “Reading was sports biographies about idols like Jim Brown, Walt Frazier, Wilt Chamberlain, and Muhammad Ali.”

Though his parents kept a copy of The Autobiography of Malcolm X in their home, the young Kavanaugh couldn’t keep focus on rolling lines and paragraphs. His life was sports—playing ball and imitating the guys he saw on television and heard about on the radio. It was enough for him to read sports biographies, books linked to his passion. In those books, they praised Black men. Those books were “written by folx that looked like him.”

By his twenties, however, Kavanaugh sought words that represented his Black experience on a deeper level. He gravitated toward Toni Morrison and James Baldwin, finding texts that “reflected Black culture in a purposeful way.” They were political. They were bold. Each work had an edge that dug deep into Kavanaugh’s heart. The novel that bore the deepest was a lesser-known one—Billy by Albert French.

“It’s the story of a ten-year-old Black boy convicted of killing a white girl and his sentence to the electric chair,” Kavanaugh explained Sunday.” It connected me to a literary arts purpose and influenced me to connect with my greater community. It was distorted with the injustice of the story, but also the injustice of marketing and publishing—how some books come out, and they just go straight to the shelf. It’s a short book, less than 200 pages, but the story itself, the treatment of Black people in this country, really resonated with me. I wanted other people to read. That. Book.”

Kavanaugh has brought that same verve to One Book One Bronx, creating not only a book club but a reading community. Usually, the group meets weekly. The model is democratic: members vote on what novels they want to read. When the group can gather, they pass around refreshments and eat snacks. Parents bring their kids from daycare and school; their children listen to the stories.

Friends old and new catch-up. People laugh. People cry. A character makes someone think of a friend, a family member, somebody they once knew. Some members speak. Others listen. Kavanaugh lets the conversation flow without restraint. One Book One Bronx is more than novels: it’s the sum of its parts.

“I wanted a low entry point,” Kavanaugh said. “I’m trying to really attract people back to read. I always joke that people can come to sit down and smoke a cigarette. Do what you wanna do—we have space for everyone.”

Huggins described her Urban Life Book Discussion Series by the building that normally confines it: "We’re meeting inside a library. There’s freedom within a structure.”

She curates the group’s reading list a year in advance (during Sunday’s podcast, she wrote down each of the novels mentioned for further exploration). Her members are all avid readers. For most of them, the book club is an outlet to express their literary passions and pursuits. The group meets every five weeks to discuss the entirety of a novel.

The club typically goes through ten substantial novels per year. Normally, everyone must speak at every meeting; Huggins described the atmosphere as warm and inviting. Peers want to hear other’s analyses. They yearn to view another perspective; it enriches the reading experience. It’s a chance for friendly discussion and debate over orange slices and Nutri-Grain bars.

The book club “gives people who like to read the chance to be together and talk about it,” Huggins said.

COVID-19 threatened both communities’ existence. At the start of the pandemic, Kavanaugh and Huggins were at a loss. Their book clubs had become a sacred, treasured time in their week. They were a “bright spot,” said Huggins. They were like “going to church for Sunday Service,” added Kavanaugh. A large part of their routines, lives, and community, was violently ripped away. It wasn’t long before the pair resigned themselves to a forced hiatus, seeing no way for the clubs to carry on as they once did.

Club members refused to let their communities die. They rallied together with a unanimous fervor, pushing Kavanaugh and Huggins to continue their work through Zoom. Both admitted they were a bit reluctant at first. For Kavanaugh, large Zoom calls  required mass coordination and money; he would need to apply for more grants. Huggins felt off-kilter; she was unfamiliar with the platform, and technology posed potential volatility absent in the confines of her library.

Despite their fears, Kavanaugh and Huggins pressed on. It wasn’t long before One Book One Bronx experienced exponential growth through Zoom. In-person, the club’s average attendance was 25 people. Virtually, it reaches over 80 individuals around the United States.

The Urban Life Book Discussion Series recently examined the biography Citizen Outlaw: One Man’s Journey from Gangleader to Peacekeeper by Charles Barber. The book is very much a New Haven story: even over Zoom, William Juneboy Outlaw III attended and enriched their discussion and analysis.

During a recent One Book One Bronx Zoom meeting, a woman held her laughing infant in the camera’s view. Club members cooed and laughed before eventually going back to their discussion. That baby looked up at the screen, eyes wide open with ears sharp as she teethed on her fingers.

So the meeting was online. The community had continued, more vibrantly than ever.