Green Wakes To A Brazilian Beat 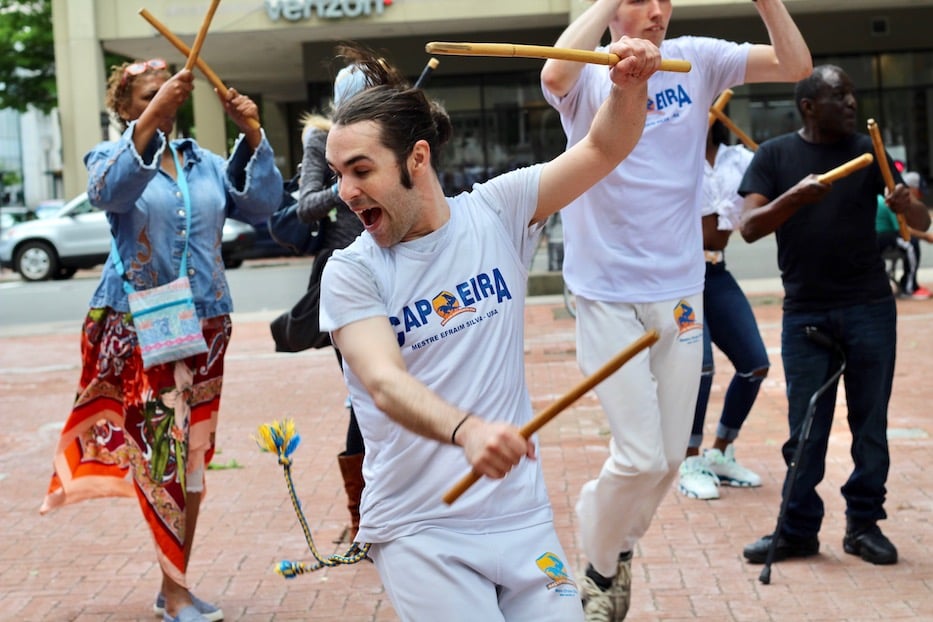 Irma Spearman wasn’t expecting to learn a new art form when she took the bus downtown Friday afternoon. But when feet, hips, and percussive sticks started moving to a heartbeat-like drum, it was too much for her to resist.

Friday, Spearman was one of a few dozen New Haveners to stumble on Mestre Efraim Silva and members of Connecticut Capoeira and Dance on the New Haven Green, the latest installment in a pop-up series intended to revitalize and activate the space. The series began as an experiment last fall (read more about it here), after over 100 overdoses hit the green in a two-day stretch. Those performances included healing drums, bomba, rhythm tap, and circus performers before concluding in November. 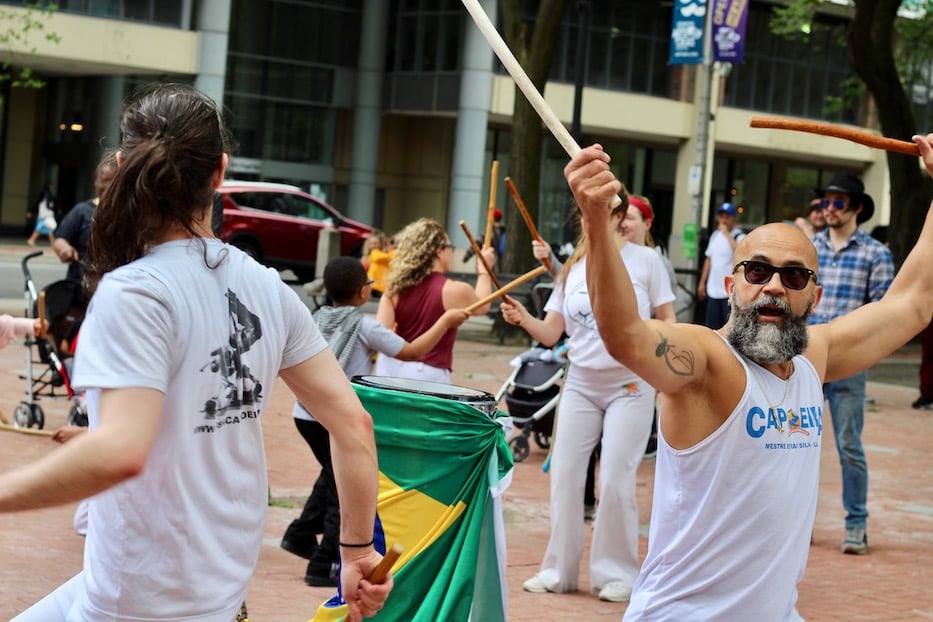 This year, the pop-ups are a collaboration among the Proprietors of the New Haven Green, Department of Parks, Recreation, and Trees, and the Arts Council of Greater New Haven. After launching with dancer Alexis Robbins last week, they are scheduled to go through early November, to conclude with Día de los Muertos.

Friday, Silva got attendees moving under a wide blue sky, first with demonstrations from his own students and teachers. The form, which he has been practicing since he was a kid and teaching since he was 17, has Afro-Brazilian roots in slavery and diaspora. As curious New Haveners wandered in, some alone and others with their small kids, friends and partners, he demonstrated the song, dance, and clapping that accompany each movement. 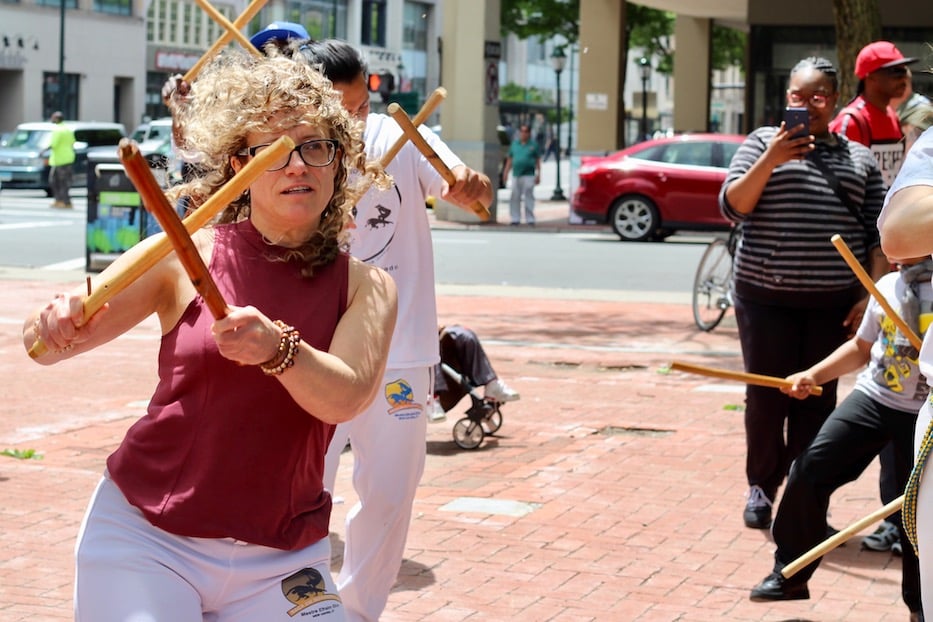 Soon he was pulling viewers from the group’s periphery into a circle as other capoeira artists handed out thick wooden sticks. At the front of the group, Silva walked people through steps of the Maculelê, a dance that becomes increasingly more intimate as people must communicate with their dance partners through movement. At the corner of Church and Chapel Streets, a group of new and seasoned dancers formed, watching him carefully for cues.

In the back, Spearman scrutinized every move carefully, then stepped back to watch as Connecticut Capoeira members launched into more of their own demonstrations after close to 20 minutes. She said that she hadn’t heard about the pop-up on the green beforehand—she was downtown to check in on her uncle—but had wanted to stay as the music and voices rose nearby, and seemed to pull her in. 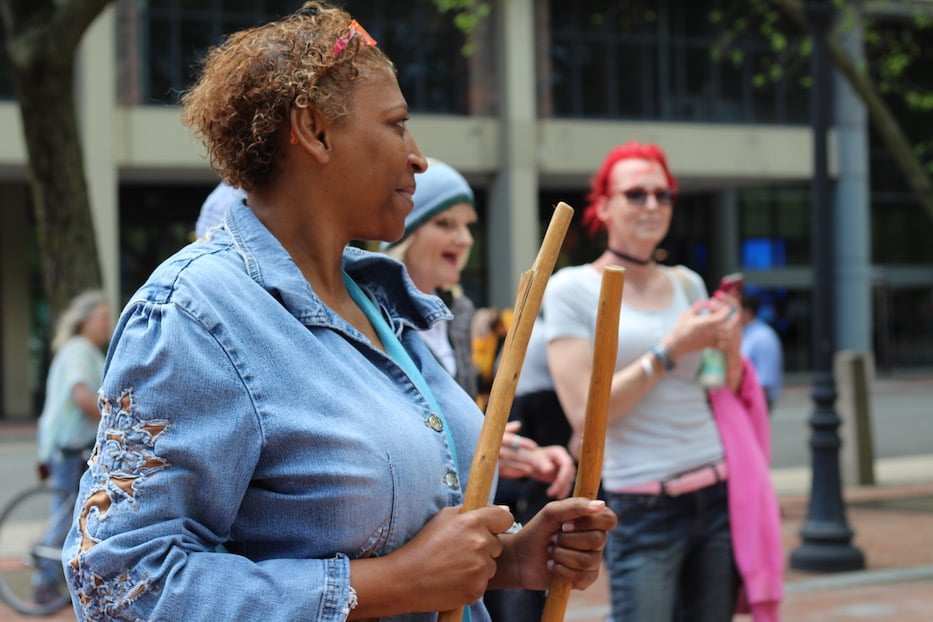 A transplant from Bastrop, Louisiana, she said that events like Friday’s make her feel more at home in New Haven, which has been her adopted home for five years. As Silva and fellow martial Jeff Herdle demonstrated toward the front, she followed in back, bringing the sticks together above her head with a satisfying clack.

“It was wonderful!” she said. “It’s a different experience. You know, I like the different environment and the structure of the martial art and dancing. It’s bringing in a positive atmosphere.” 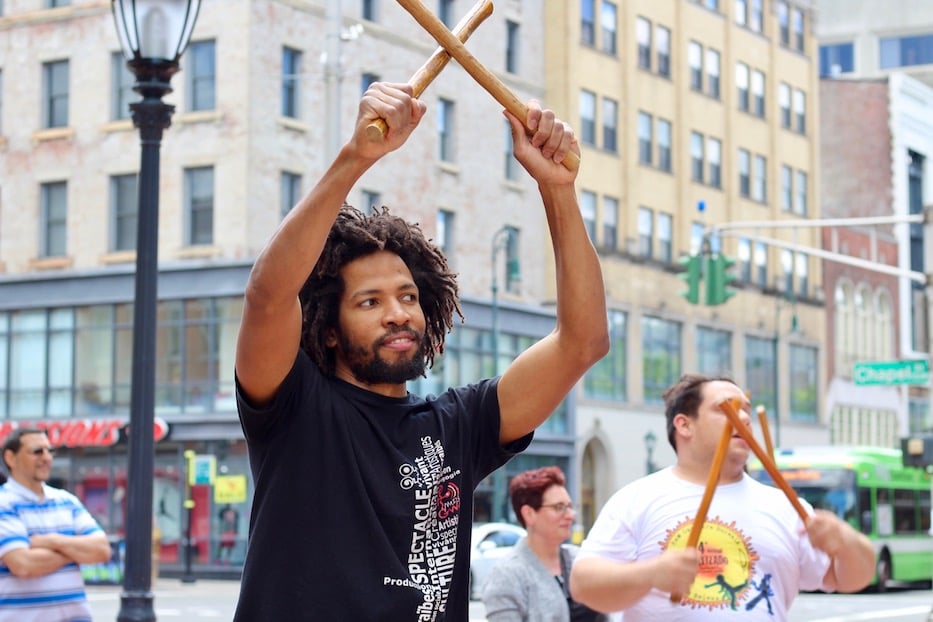 She was one of many to think so. Julien Kanor, a transplant from the French Caribbean and dancer with Elm City Dance Collective, has been practicing with Connecticut Capoeira and Dance for a year now. As he watched kids enter and exit the circle as if it were an impromptu cypher, he said he finds the form exhilarating. After stopping for a few breaths, he rejoined fellow artists and kept moving.

That’s Silva’s hope with the art form too, he said after the event. The youngest of six children, he started practicing capoeira as a kid, when he was growing up in Brazil and “I had to learn to defend myself.” By the time he was 17, he was competing in and then teaching the form. He’s still doing it 38 years later, at 55. 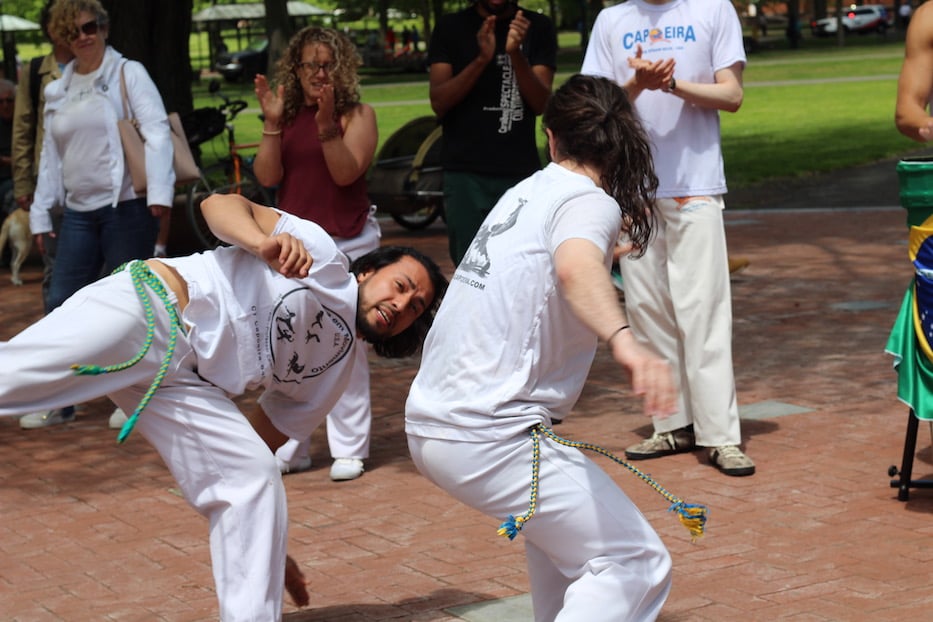 “Once I understood the art form, I never had to fight,” he said. “I think the self-confidence that you acquire by learning to defend yourself stops people from wanting to mess with you. But then I fell in love with the music, with all the dance, and the difference it makes in people’s lives.”

“Neither one of the people here is from Brazil,” he added, motioning to the group. “They sing in Portugese. They play all the instruments. They dance all my dances. And they love Brazilian culture. They love themselves. And they are all friends. From completely different cultures.” 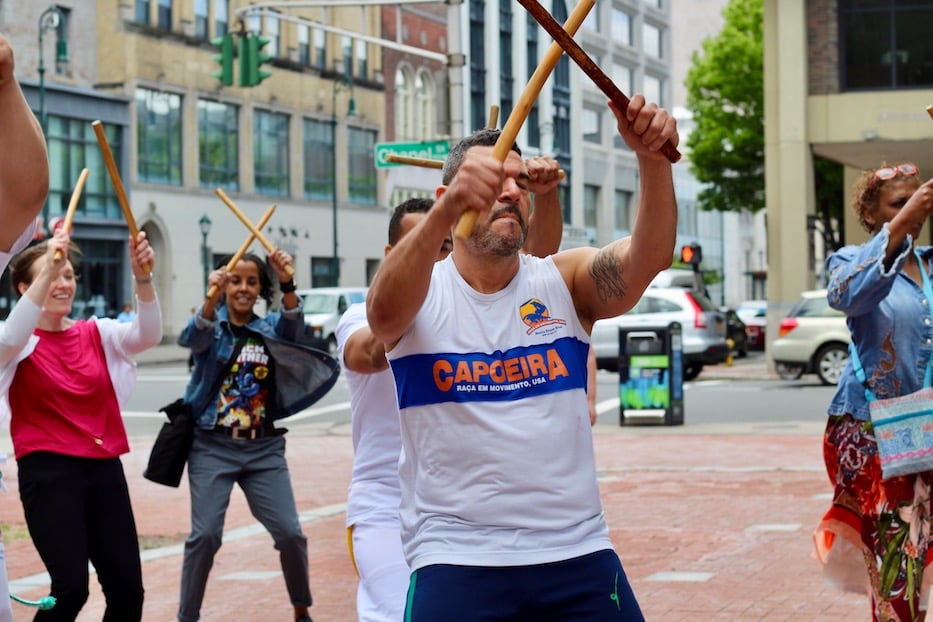 In addition to a studio in Erector Square (the group is preparing to move to 200 Ella Grasso Blvd. next week), Silva teaches across New Haven, including in the city’s elementary and middle schools. He praised the ability that capoeira— born out of not only diaspora, but the pain of human bondage—now has to bring together people of different racial, social and ethnic backgrounds to celebrate one form.

“It is possible that no matter where you come from, there is a way for us to communicate,” he said. “Through music, through dance, through movement. And that is an amazing, powerful way of living.”

Catch CT Capoeira & Dance Saturday, May 25 for a demonstration at 5 p.m. at their 315 Peck St. headquarters.