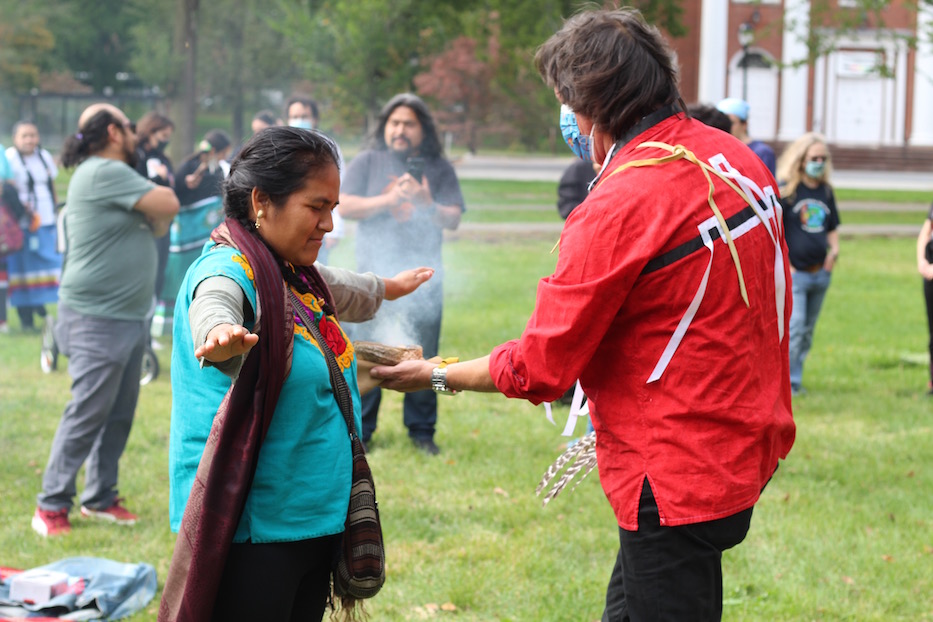 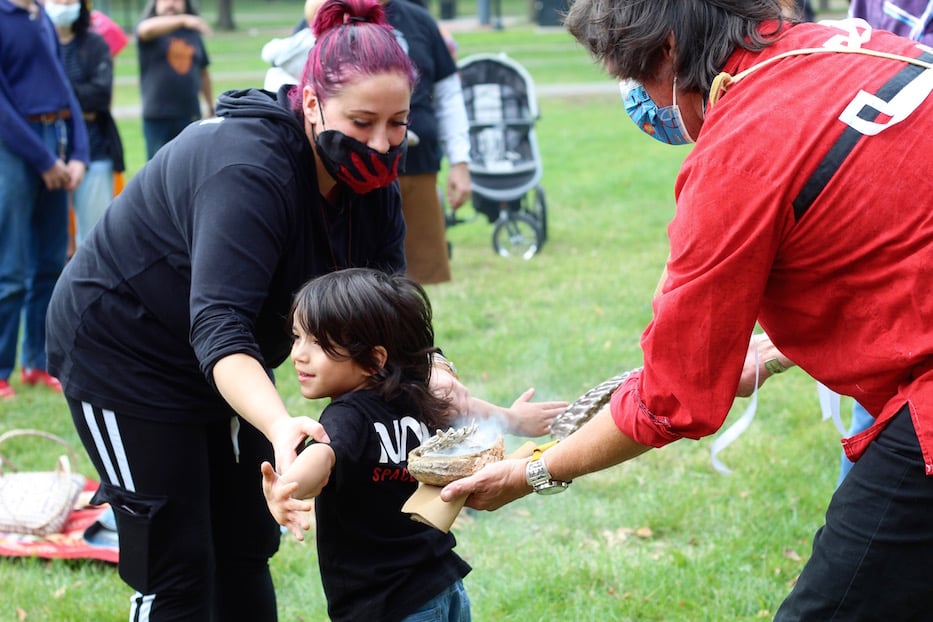 The drum coasted over the New Haven Green, a steady heartbeat as voices began to swell above it. Huddled around a microphone, members of Red Territory led each other in a round, the song catching on something as it wove upwards. Four dozen pairs of eyes turned toward the sound and listened. The smell of sage hung low in the air.

Monday afternoon, Native artists, activists, and storytellers gathered at a now-annual Indigenous Peoples’ Day celebration on the New Haven Green. Organized by Norm Clement and Ricky Looking Crow, the event sought to create a space for Indigenous people to gather, celebrate, and share the stories of where they come from and who they are. 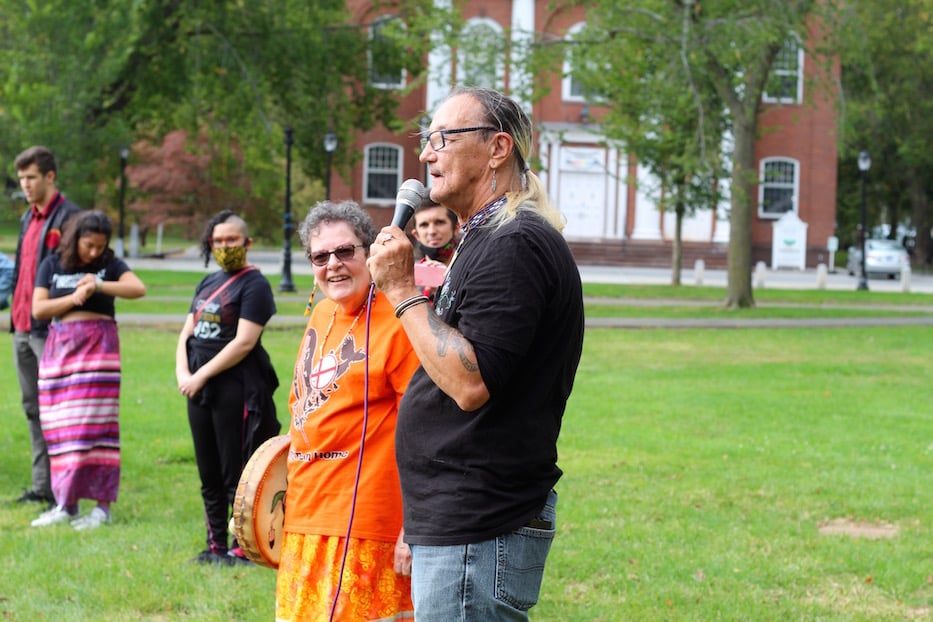 "I got a few things on my mind today," Clement said early in the ceremony. "It's Indigenous Peoples' Day here in New Haven. People are still fighting to be recognized in this state, around this country, we're still fighting to get rid of the colonizer's day."

“I think today is all about unity, about praying together. It’s about awareness of the day,” said Looking Crow as he and Clement laid out sage, sweetgrass, turkey feathers for smudging, and a large bag of tobacco for prayers. He motioned to the grass beneath him, where yellowjackets buzzed through patches of overgrowth. “This is our church.”

This year’s celebration came almost 15 months after the city’s Board of Education, which recognizes Indigenous Peoples’ Day, voted to change the name Christopher Columbus Family Academy on Blatchley Avenue. The City of New Haven does not yet recognize Indigenous Peoples’ Day; alders voted on “Italian Heritage Day” instead last September.

For over two hours, attendees approached a communal mic with the same message: We’re still here. We always have been. And we’re going to keep resisting. 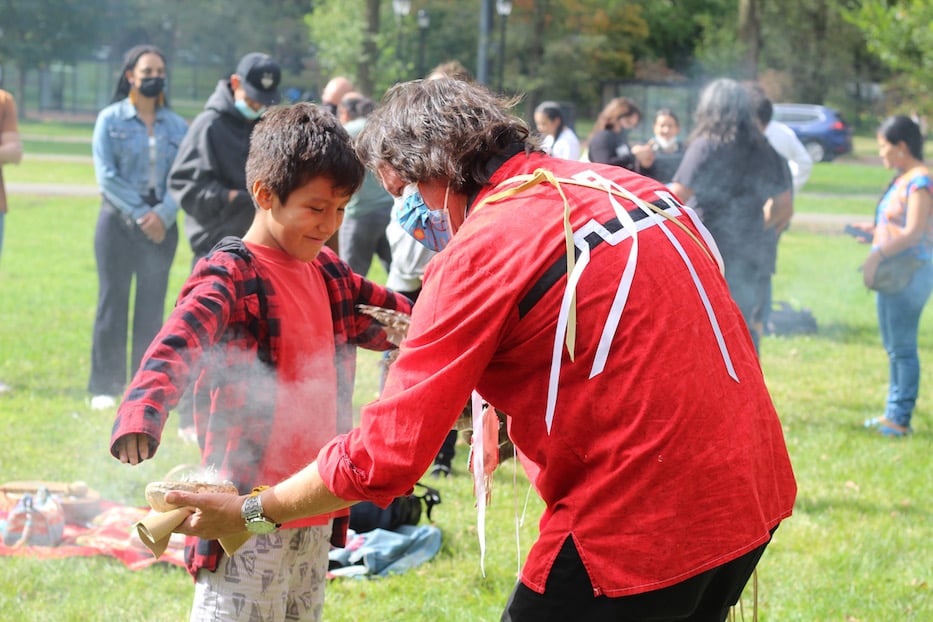 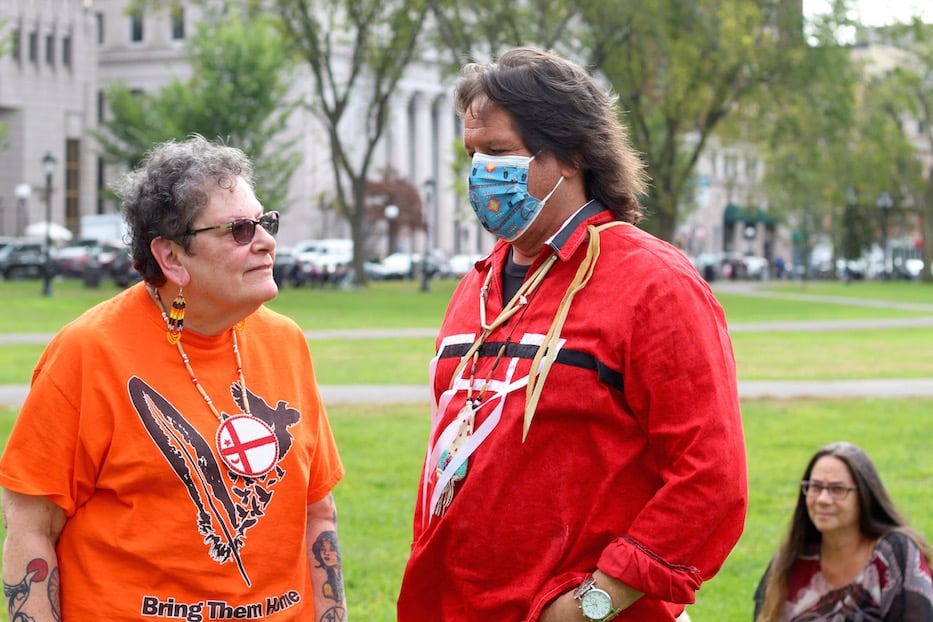 As she waited for the event to begin, First Nations Mi’kmaq member Sadé Heart of the Hawk recalled growing up in a home where her mother, who had survived a “brutal boarding school” experience at Shubenacadie Residential School, “didn’t allow us to say the word Native.” At 14, Heart of the Hawk and her family moved from what is now recognized as Nova Scotia to Massachusetts. It was there, 51 years ago, that she began to learn her own history and share it with those around her.

Now almost 75, she lives in North Haven. She met Clement, who is a member of the same confederacy, at the Standing Rock Indian Reservation in 2016.

Since then, she has become an advocate for speaking out about the horrific history of residential or boarding schools, which tore hundreds of thousands of Indigenous children away from their families in both the United States and Canada. In the U.S., there were over 350 known boarding schools. In Canada, which adopted a model based on the U.S.’s violent system, 139 are known. Clement noted Monday that the history is inextricably linked to Christianity: an overwhelming number of the schools were founded, funded, and run by the church. 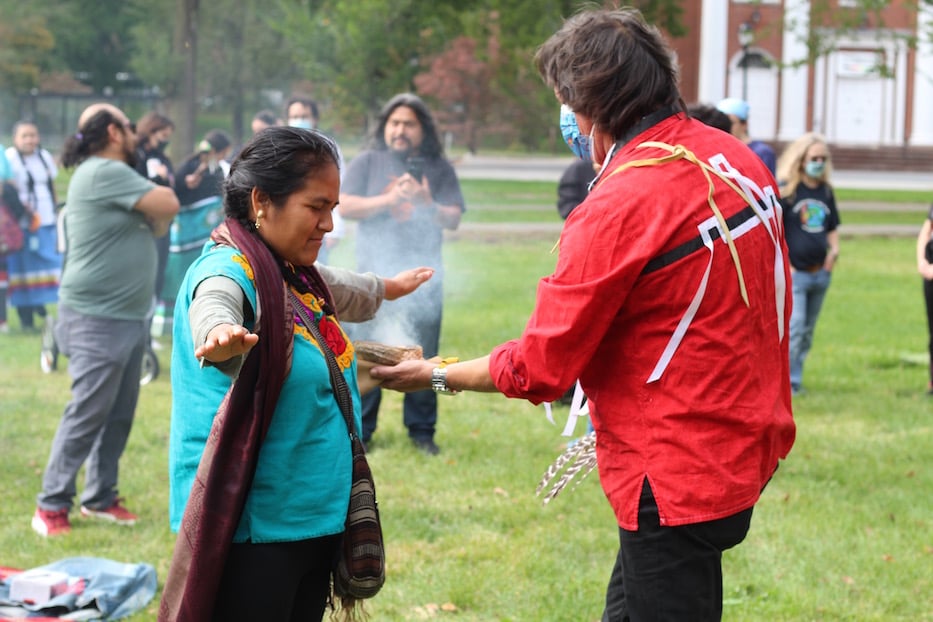 “We’re not extinct,” Heart of the Hawk said. A bright orange shirt that read “Bring Them Home” stretched over her frame. “Some people still think that we’re extinct. It really is important that we show people that we’re here. You need to know that history … because if you teach that, you have to recognize it.”

Around her, attendees echoed that message as they waited for the ceremony to begin. María Luisa and Cosijopii Melchor, who immigrated from Oaxaca with their family, said they were there to recognize Indigenous people as a bright part of the city’s present, not its past. Three Spirits, who grew up in what is now known as South Dakota and then traveled the West on a rodeo circuit, is Lakota and Seminole. After travelling for years, he ended up in New Haven.

He said he had come out Monday to be in community with other Indigenous people who live in the city and the state. Around him, people arrived with tribal affiliations that ranged from the Sioux Saint Marie of Northern Michigan to Great Plains Ojibwa the city’s sizable Oaxacan Mixtec population. 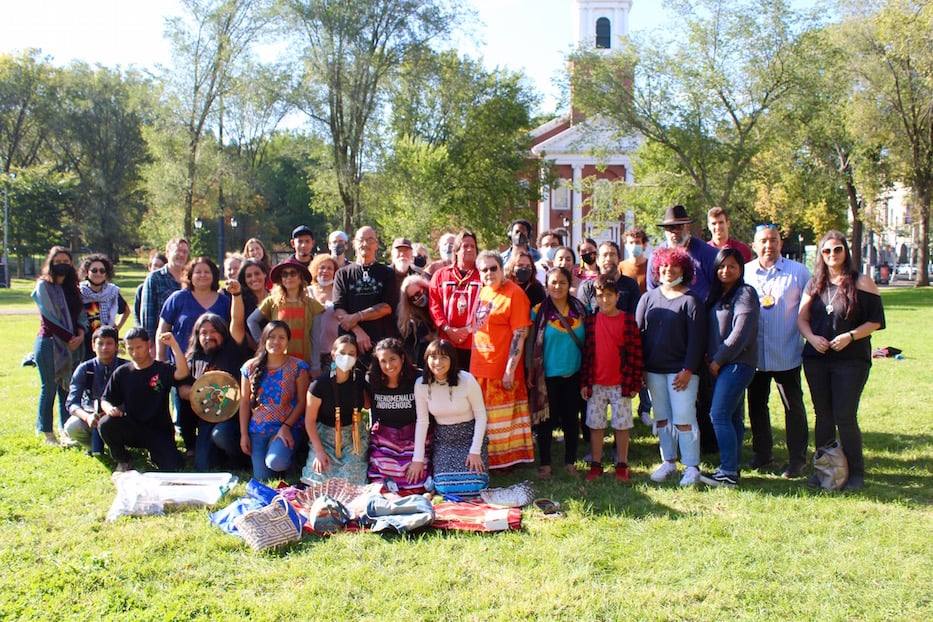 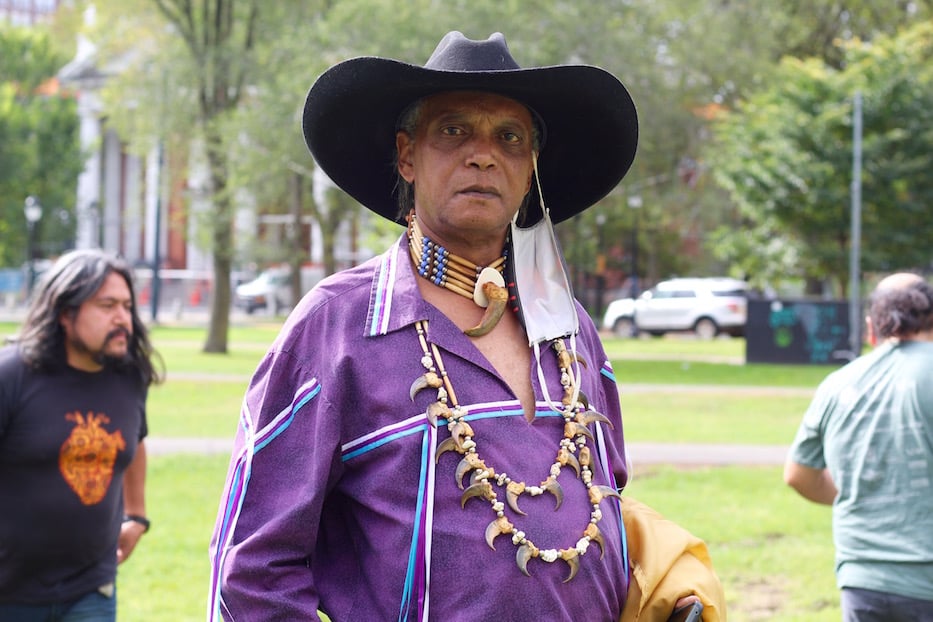 Those words reverberated through the ceremony itself, which began with ritual smudging and then bloomed into drumming and song, collective mourning and memory, and storytelling that tied Indigenous history to present-day environmental activism. Looking Crow said that the smudging, which filled the Green with the fragrant, nose-prickling and sweet scent of sage, was meant to cleanse the space.

"I don't want this to be a protest,” Clement said. “I want this to be a celebration, and I want people to come up and tell their stories ... so we can all be more educated about who we are when we stand together in a circle."

It also created an opening for Clement to remind attendees that in New Haven, Indigenity extends not just to North America, but also to the city’s vibrant Afro-Caribbean, South and Central American communities. In New Haven, that includes Guatemala's Indigenous Mam community, the Mixtec and Zapotec of Oaxaca, First Nations people now living in what is recognized as the United States, and tribal affiliations from across the country. 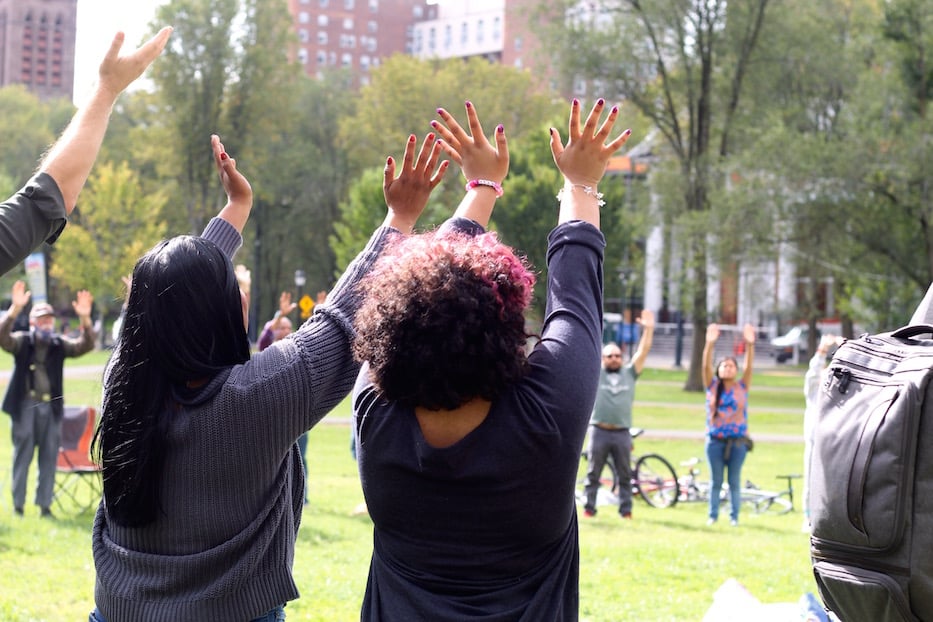 Attendees extend their blessings to the Creator as Angel Lion Heart Ortiz leads them in prayer.

Angel Lion Heart Ortiz, who is Indigenous Taíno, spoke of the shared communal importance of Indigenous customs before he led attendees in a six direction ceremony. Even if people didn’t recognize the words that he was singing, he said, they could recognize their weight. The blessing, which saluted the four directions as well as Mother Earth and the Creator, sailed over the grass, all the way to the flagpole in the center of the Green and to City Hall across the street.

“This is the first language that Columbus heard when he arrived here, in our territory,” Ortiz said, his voice muscled but never gruff. “We’re here today, to celebrate and acknowledge a lot of things, but everything that we acknowledge is going to be something positive, something beautiful.”

Coming up to the mic with a drum in one hand, Heart of the Hawk performed her “Survivor Song,” an honor song to residential school survivors including her mother, and the generations that followed. As the unmarked graves of thousands of Native children are discovered in Canada, she is working to bring that history to light. A hand-beaded medallion with the red-and-white Mi'kmaq flag swung on her chest as she sang. 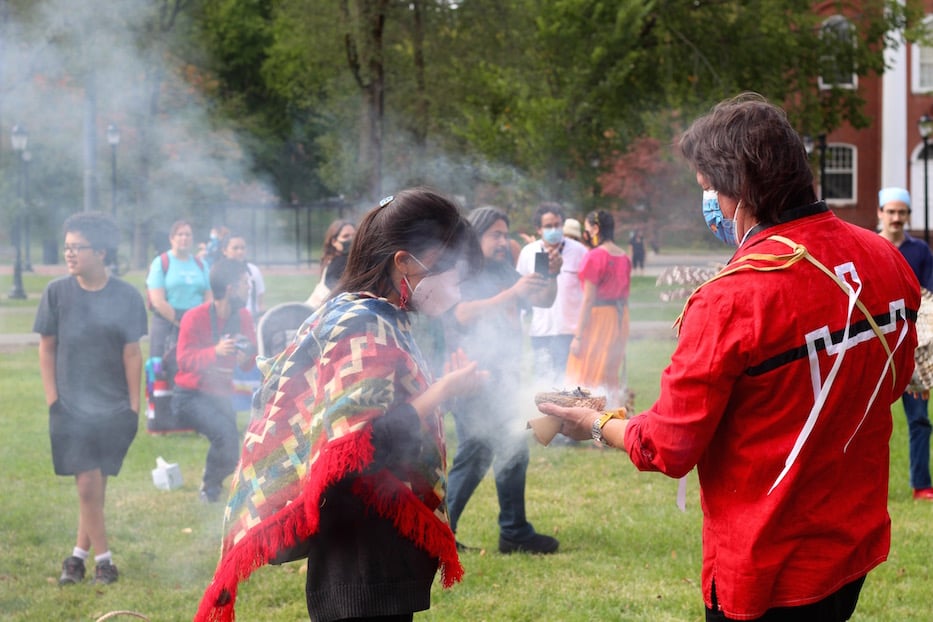 Vanesa Suarez, who has become an outspoken advocate for missing and murdered women, came Monday to listen.

“We haven’t even started to look here,” Clement added a few minutes later. “Many children will never ever be found. Because they did try to get home, and didn’t make it.”

Amidst drumming, dancing and song, participants reminded both non-Native attendees and each other that the history of Indigenous people, often taught in the context of whiteness, is not an artifact—it’s still evolving and alive. At Clement’s nudging, members of Red Territory approached the mic, their voices rising as Snuneymuxw First Nations member and Yale sophomore Oscar Turner beat a drum.

All of them are members of Yale’s Native American Cultural Center, where student programs have cautiously resumed in the second year of the pandemic. 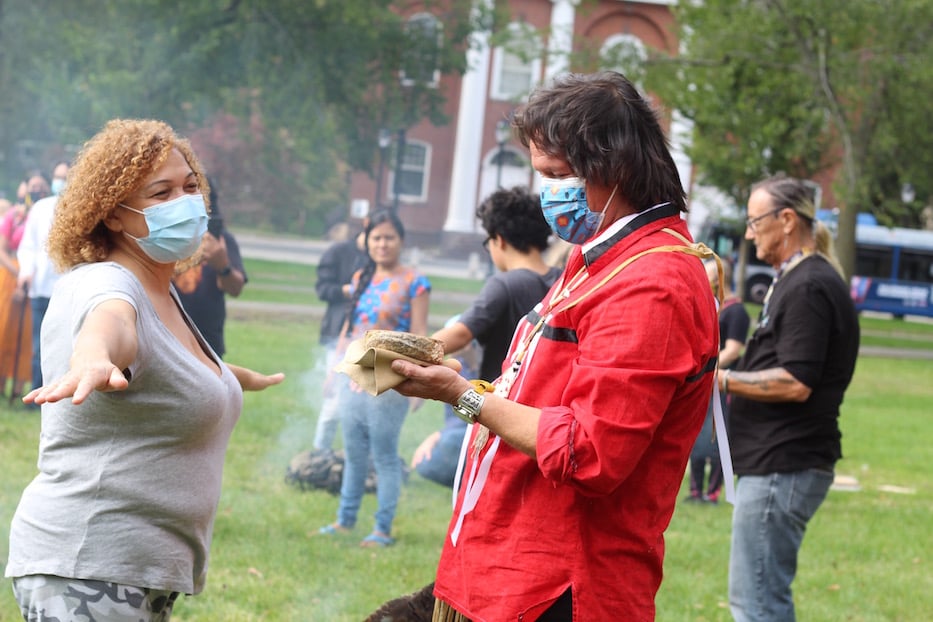 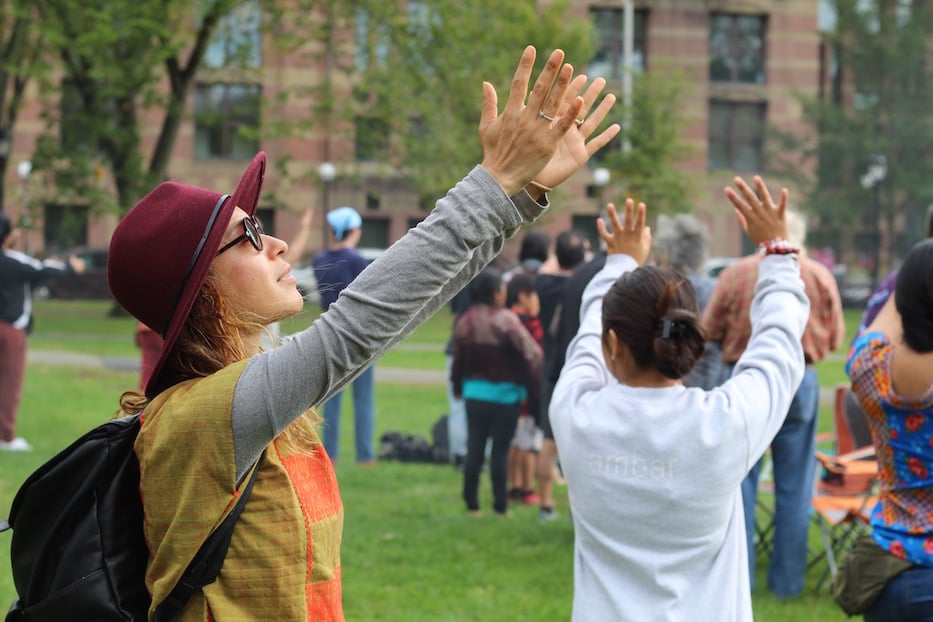 Midway through the open mic, Clement jumped back in with an impromptu history of the Quinnipiac, on whose land the New Haven Green and the city now stand. He said that he constantly questions a dominant narrative taught in schools—that members of the Quinnipiac peacefully left their homes after signing a contract with English settlers in the 1830s.

“These are fights that we need to have,” he said. “We’re still here. We’re growing. For the first time that I can remember, people are starting to listen to us.”

Erick Sarmiento said he was glad to have the chance to be with others celebrating the day. Several years ago, he and his son came to New Haven from Oaxaca. He is Mixtec, and said that there is significant racial persecution in Oaxaca that persists today. 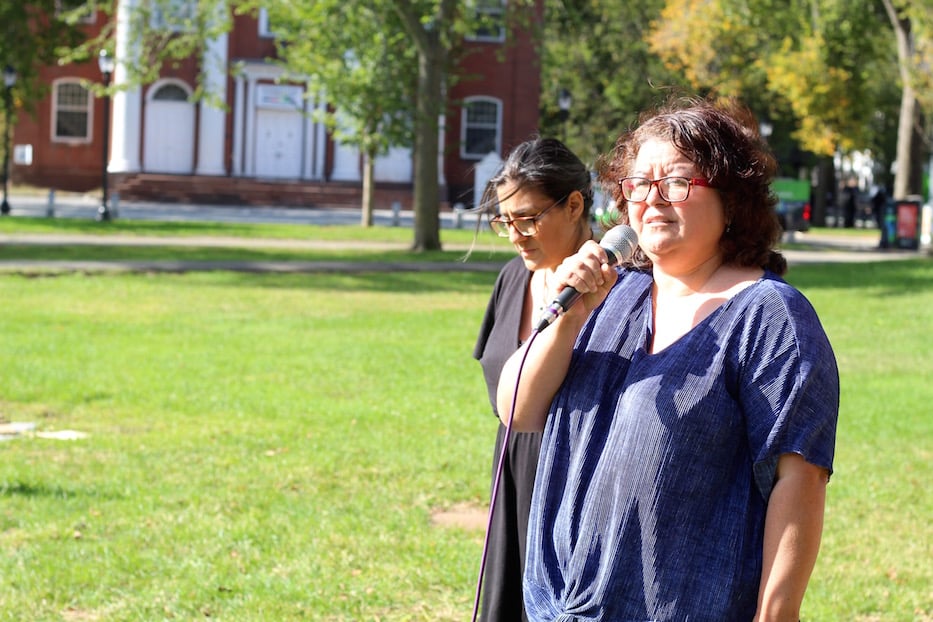 East Havener Lorena Venegas. Beside her is Gabriela Campos, who is from Peru and added her voice to the reminders that Indigenous people are still very much present in New Haven.

East Havener Lorena Venegas, who has been a vocal opponent of Tweed Airport’s $70 milion expansion, tied Indigenous rights to her own environmental advocacy. Growing up in a Chilean family, she learned about her Mapuche roots from her parents. Now, she said, she is fighting for the protection of New Haven’s marshland in that same spirit.

“All this land has to be returned,” she said. “This day, for me, means that it’s a day of respect, appreciation, and gratitude. I’m here for the connection on this land, which is Native land.”

Before a closing round dance and blessing from Soaring Bear, or educator Richard Cowes as he is known in other circles, Clement thanked attendees for coming. He reminded them that there is still work to do—starting with City Hall and extending to the city’s classrooms, history books, and policy making decisions.

“It makes my heart feel full when I see everyone come out for who we are, and fight for more,” he said. “Colonizers are gonna colonize. That’s what they’re gonna do. We must keep up the fight.”

For more from the event, watch the Arts Councli’s Facebook Live videos above.