It's A Beautiful Day In The Gayborhood 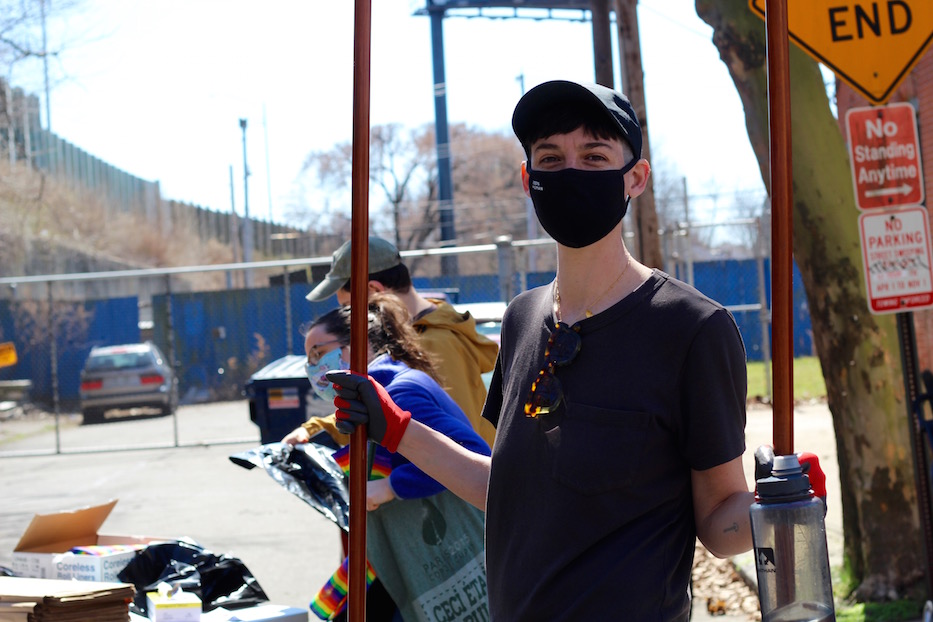 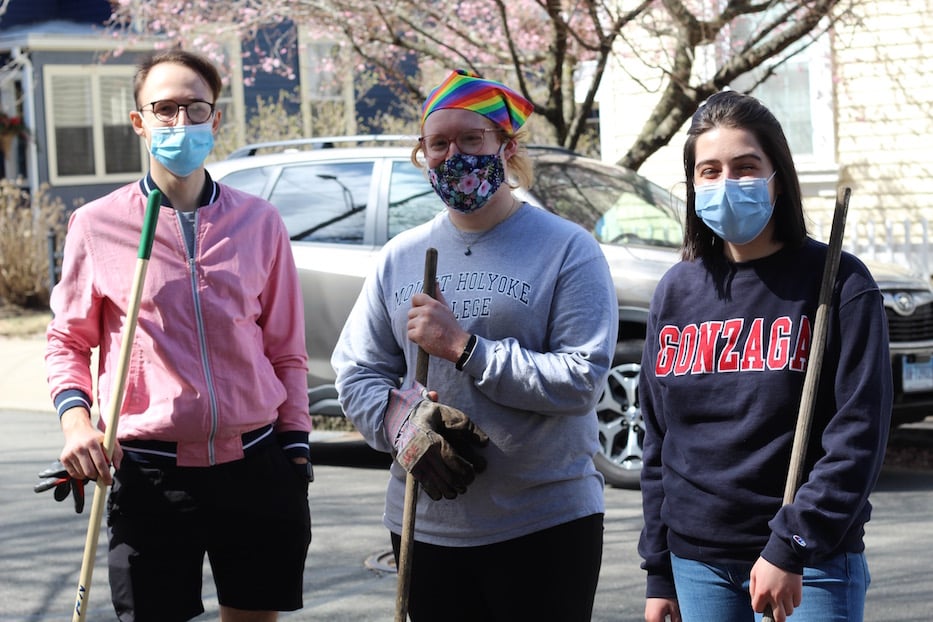 Before last weekend, Sarah Lawson had never met Jamie Georgelos and Luke Johnson, despite the fact that they all live within walking distance of each other. By Saturday afternoon, the three were discussing where to find the best cup of coffee in New Haven while raking up old leaves and getting plastic off the street.

All three joined a “Gayborhood Clean Up” Saturday, held on Lyon and Bradley Streets in the city’s Wooster Square neighborhood. Organized by Lyon Street residents Dominic Warshaw and Sophie Duncan, the event pulled in roughly 30 neighbors for three hours of trash collection, leaf raking, and community building. Attendance came largely through word of mouth and handmade flyers that Warshaw designed and put up in the neighborhood.

“I have long recognized this as a disproportionately queer neighborhood,” Warshaw said, holding a rake in each hand as they walked toward their dog, Kishke, at a steady clip. “I know I want to remain in direct community with the people around me. A lot of these people, I didn’t know before today.” 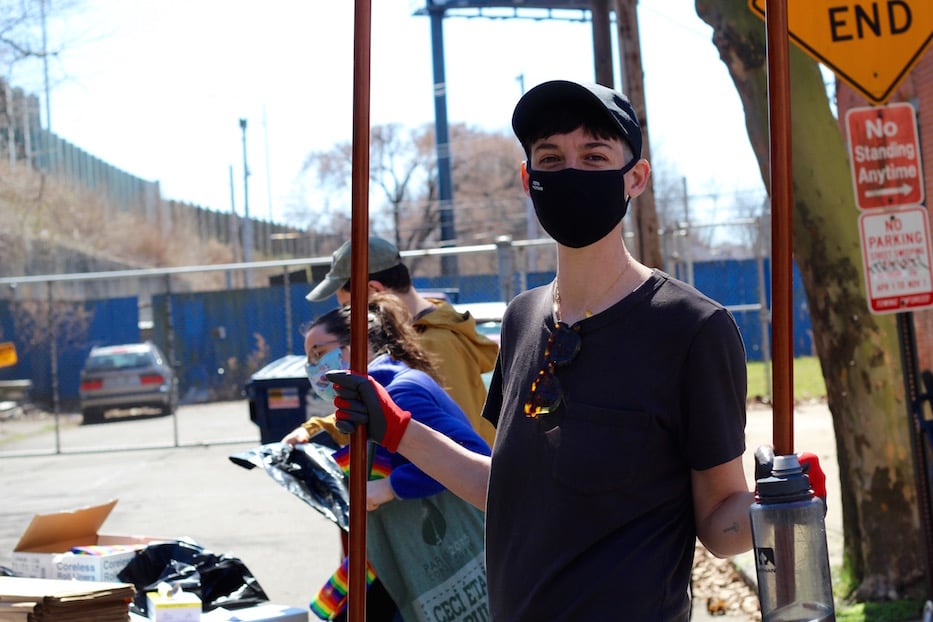 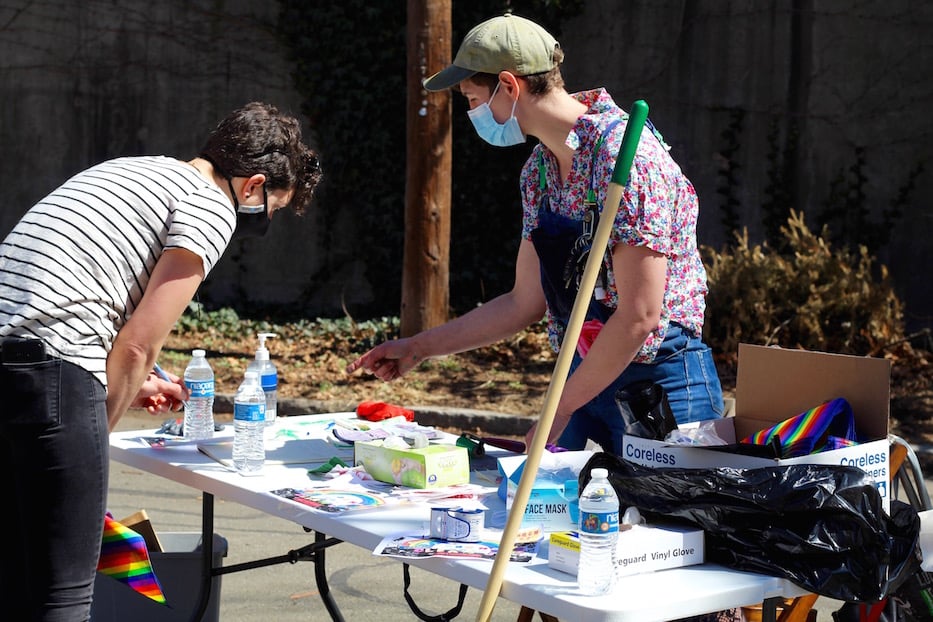 The idea behind the cleanup began just a few weeks ago, after Warshaw noticed that neighbors didn’t seem to know each other—and that the street was filled with non-biodegradable trash and detritus that piled up in yards, on sidewalks, and in the middle of the street. Last fall, they joined musician and poet Salwa Abdussabur for “Freshen' Up Fridays,” a similar, biweekly neighborhood cleanup in Beaver Hills. They proposed the idea to Duncan, who lives in the same house.

The two got in touch with Wooster Square Alder Ellen Cupo, who lives a few blocks away on Brown Street. Cupo collected rakes from the New Haven Public Works Department, picked up gardening gloves from neighbors, and blasted the event out to constituents. Warshaw designed and put up a flyer with overturned trash cans, wide-eyed rodents, and a crowded residential street in the background. For good measure, a raccoon’s speech bubble let passers-by know that allies were welcome too.

By the time Saturday rolled around, cleanup materials filled the street. There were leaf collection bags and limp garbage bags, ready to be filled with trash. An army of rakes stood at the ready. Duncan and her dog, Gromit, greeted attendees at a table stacked with rainbow-patterned bandanas, homemade woodblock prints, and fabric patches with vultures and raccoons that neighbors proudly pinned onto their pants and jackets. Bright sidewalk chalk announced the event in exuberant, sun-soaked scrawl on the corner. Dogs padded around with their humans in tow.

“I joke with friends that it’s [Lyon Street is] zoned specifically for queer people with dogs,” Duncan said as she covered a woodblock in forest green paint. “The idea was to get people outside talking to each other, and cleaning up the neighborhood. It feels like a small form of species penance.”

It also marks a welcome, unspoken shift. Until recently, Lyon Street was known for its high concentration of NIMBY neighbors, many of whom unsuccessfully attempted to block a youth homeless shelter nearby on Grand Avenue. Saturday, that reputation melted away as new friends bonded over garbage bags and old, unidentifiable objects, from animal bones to petrified yogurt cups.

Alli Warshaw, who is Dominic's fiancée, wheeled out a speaker system blasting a mix of Shakira, Janelle Monáe, and vintage Lady Gaga. Every few minutes, cleaners scurried onto the shoulders of the road to avoid cars. A few drivers rolled down their windows to cheer them on.

“I love it!” yelled one, pumping their arm in approval before driving off. 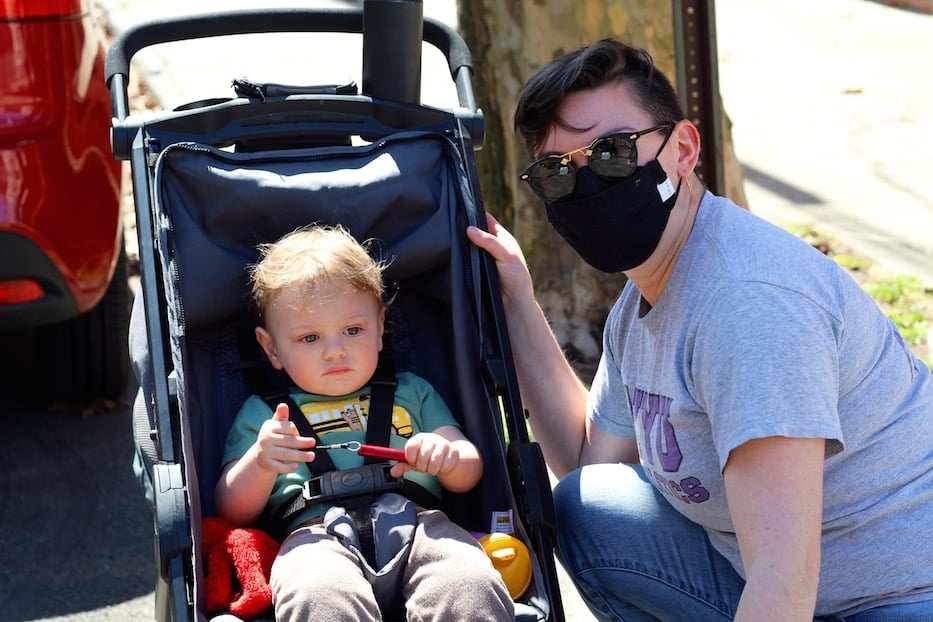 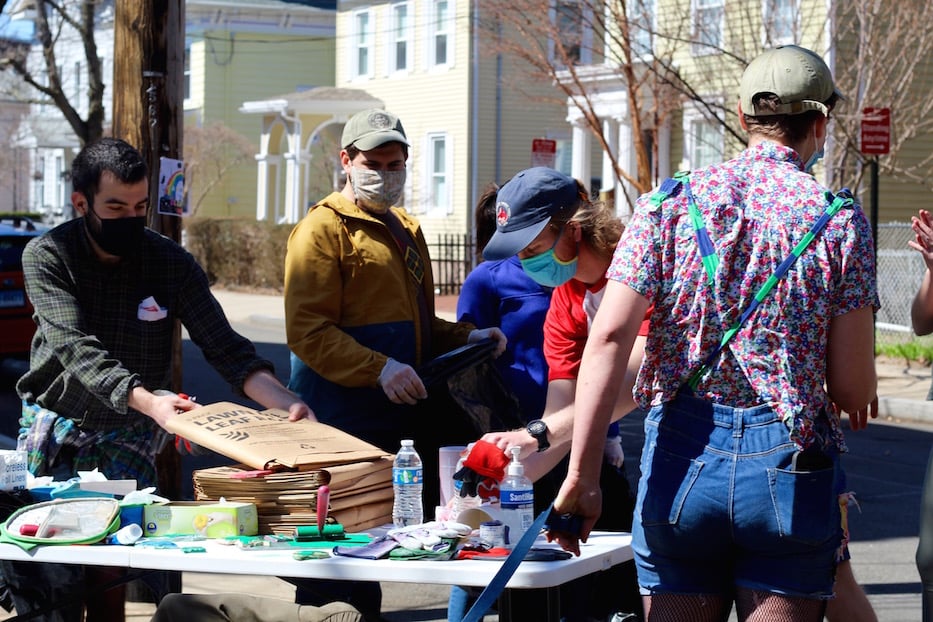 Top: Ellen Cupo and Hunter Ian Cupo Dunn, who is just under a year and a half old. Bottom: More volunteers show up.

Up and down the street, neighbors connected after a long, dark pandemic winter. Elizabeth Nearing, who moved to the neighborhood from East Rock last summer, joked about starting a queer skate group on the block. Raking on Bradley Street with her young son Hunter, Cupo called it the highlight of her month. As the neighborhood’s alder, she’s already thinking about how to normalize trash pickups in nearby Jocelyn Square, Grand Avenue, and off of Wooster Street, all of which fall within her ward.

“Nothing is more important than being together in community safely,” she said. She praised Warshaw and Duncan for creating a space where neighbors were able to feel completely comfortable showing up as themselves.

Her husband Ian Dunn rolled in with reinforcements: leaf bags and a case of water for volunteers.  Hunter toddled down the street, inspected his parents’ cargo bike, and took short breaks in his sun-soaked stroller. Cleaning comes naturally to him, Cupo said: he waits by the window for the garbage truck each week. He has a miniature vacuum cleaner that he pushes around. The neighborhood cleanup was right up his alley.

After eight years on Lyon and William Streets with their dog, a friendly boxer mix named Benny, husbands Seth Wallace and Kevin McGuire have seen a new influx of queer neighbors move onto the street. They’ve also noticed an alarming accumulation of discarded masks, plastic bits and bags, styrofoam bowls, and nip bottles. Just days before the cleanup, Wallace saw a driver throw a small plastic takeout container out their car window as they drove down the street.

“I did feel like it was kind of everywhere,” he said. 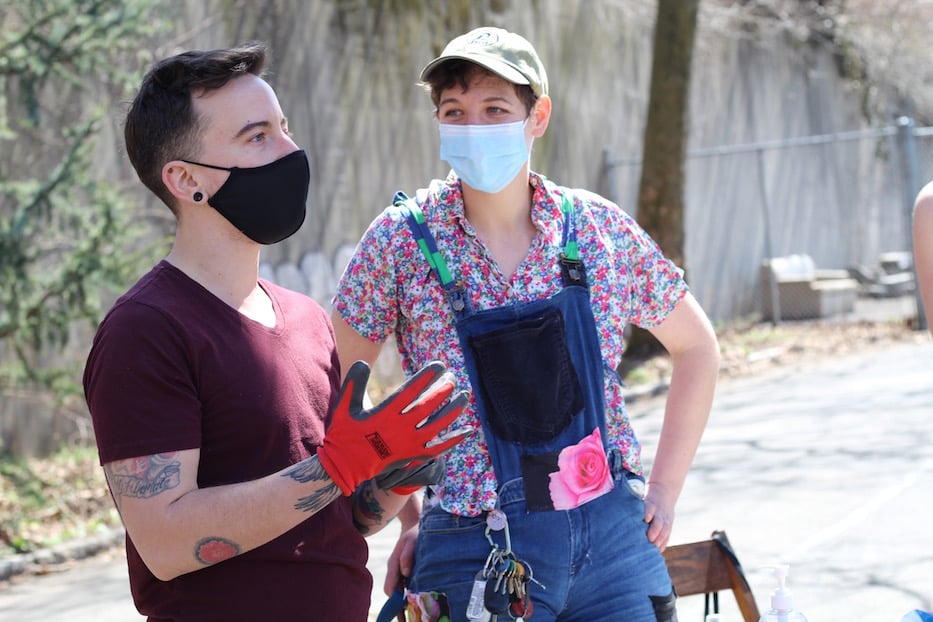 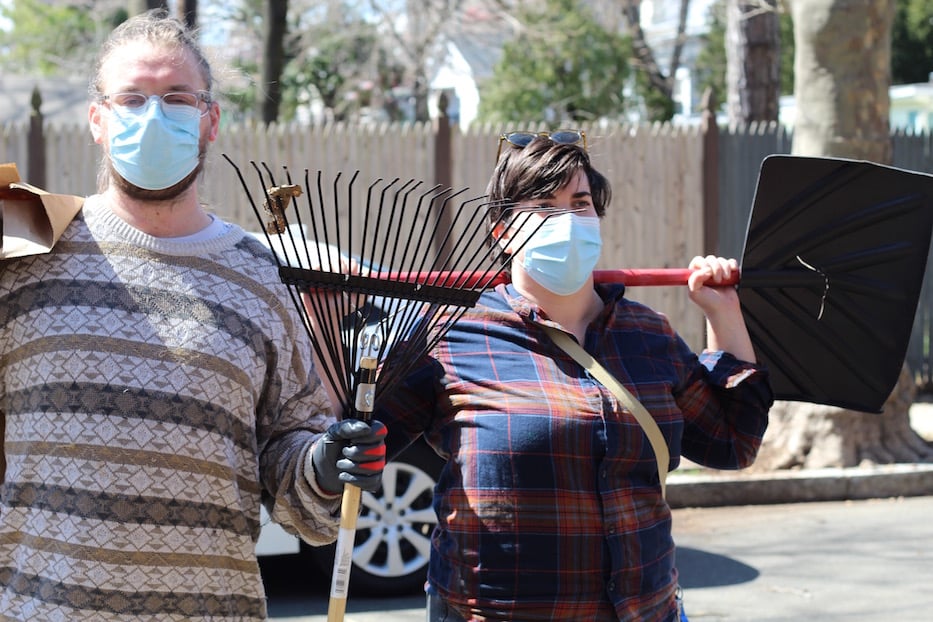 While he and McGuire were excited to beautify the space, they were equally excited to meet new neighbors. They are already close with Warshaw and Warshaw through their dogs, who like to play together. But Wallace said he didn’t know several of the people who had come out to help. He seemed to take mental note every time a new volunteer dropped by, gloved up, and grabbed a bandana and a rake.

“This neighborhood is way more queer than I thought it was,” he said.

Dan Shoemaker and Allison Hadley, both of whom identify as queer, moved to a studio on Lyon Street from East Rock in the middle of the pandemic last year. Saturday, Shoemaker said he came out not just to soak in the sun, but because he also sees the intersection as “kind of a little enclave” onto itself, buttressed by Grand Avenue on one side and William Street on the other.

For the first time he can remember, he feels like he’s in a real neighborhood. He said that East Rock never felt quite as inviting or personable.

“What’s not to love about meeting your neighbors?” he said. “It’s kind of a refresher on people getting to know each other … It's evidence that there’s kind of a neighborhood vibe. I had never thought of this as a ‘gayborhood’ before seeing the signs [from Warshaw].” 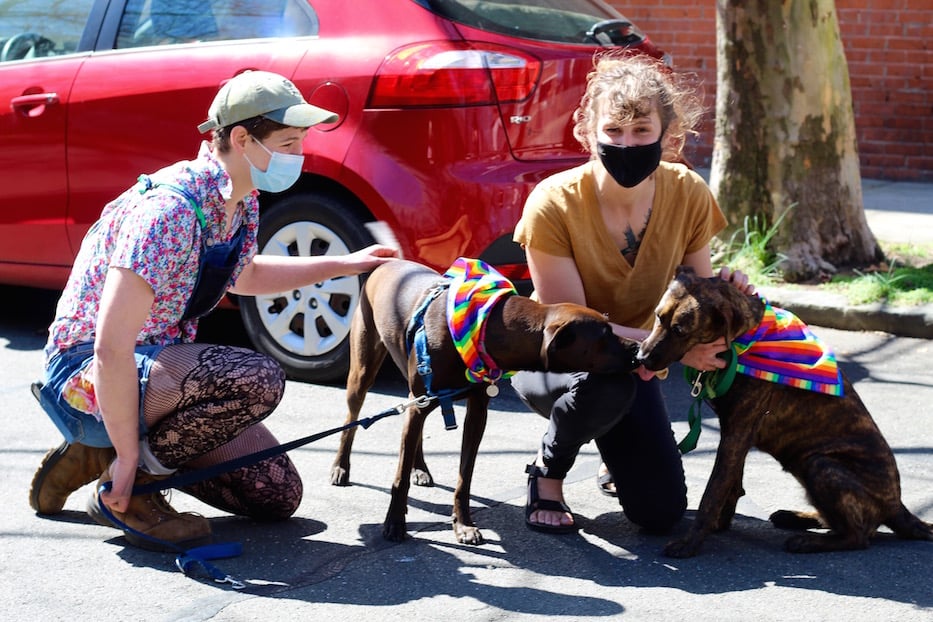 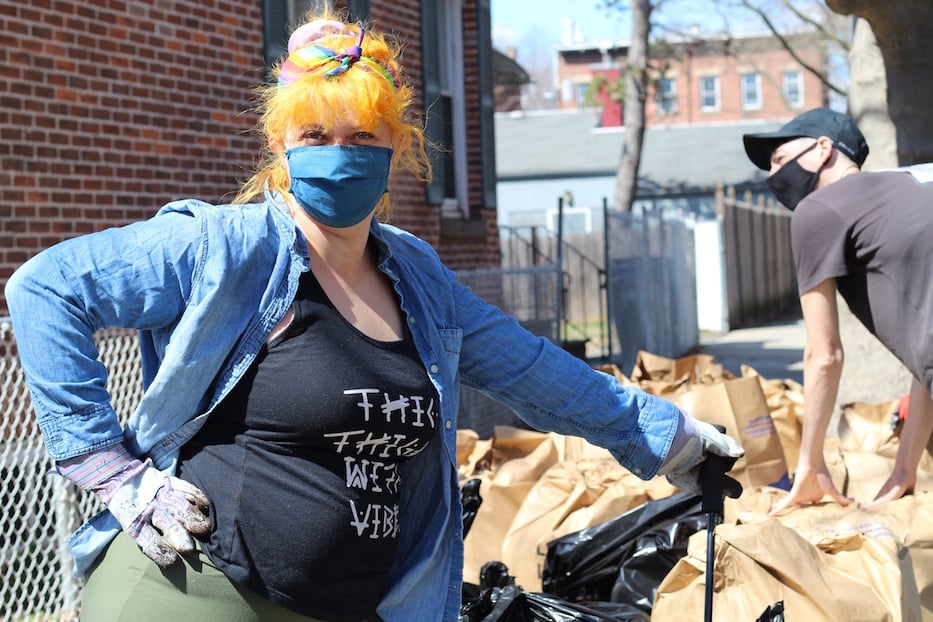 Top: Sophie Duncan, Gromit Duncan, Alli Warshaw, and Kishke Warshaw. Bottom: Julia Sears, who lives in East Rock but is in the Wooster Square neighborhood frequently, because the rest of her Covid-19 pod is on Lyon Street.

That was also true for Lawson, who found a sunny spot to clear leaves and plastic halfway down the street. On a porch nearby, Daniel Quasar's pride flag flapped in a polite afternoon breeze. After moving to New Haven from Maine, Lawson has lived on Lyon Street for four years. She hadn’t met most of her neighbors—or thought of the street as especially queer—until Saturday.

She said the best part of Saturday’s cleanup was meeting other people from the neighborhood, including Georgelos and Johnson. After a few hours together, the three had transitioned from talking about garbage in the neighborhood to talking about coffee and cycling. Georgelos, a research assistant who moved during the pandemic, originally heard about the event from Cupo. She and Johnson headed over to check it out.

“I like feeling like I belong,” she said. “And there’s space for me wherever I’m needed and wanted.”