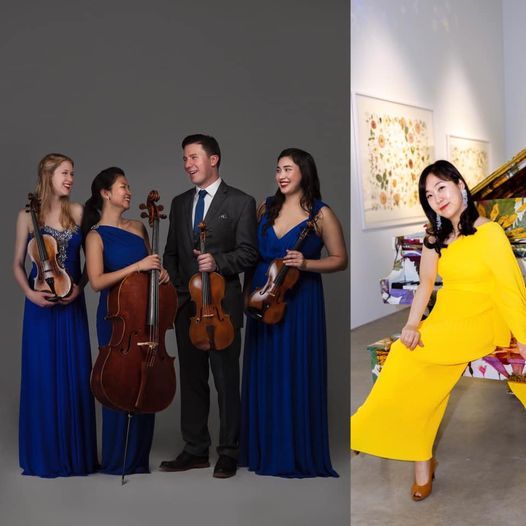 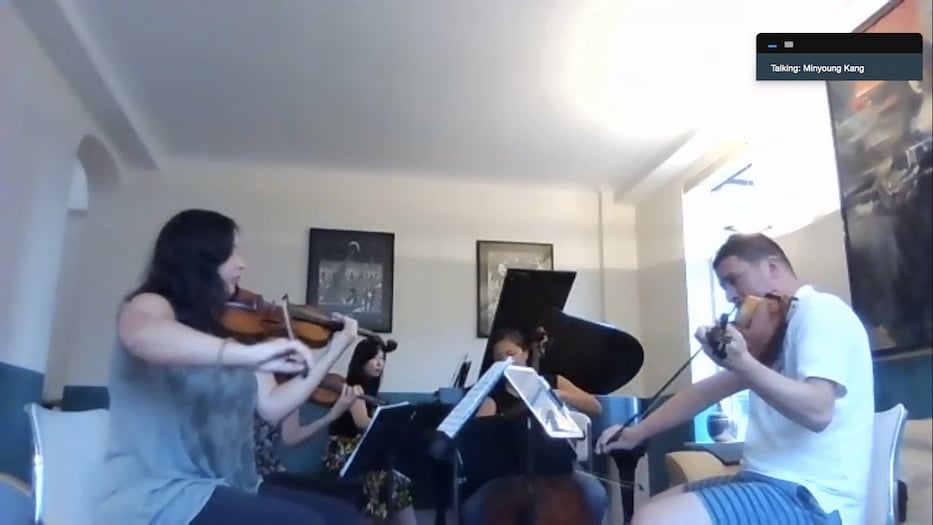 Min Young Kang and members of the Ulysses Quartet rehearsing earlier this week. Photo via Zoom.

The movement begins with a sudden, thunderous burst of sound, and then a pause almost as quickly. Keys begin to climb, but a darkness creeps in around them. A listener can imagine Dmitri Shostakovich’s knuckles working over the piano, a method to their madness. When the strings explode in sound, they are so throaty that it takes a moment to realize they’re not voices.

The sound comes from Shostakovich’s Piano Quintet in G minor, Op. 57, part of a sweeping program from the Kallos Chamber Music Series as it returns to New Haven in person next week. On Tuesday Sept. 14, musicians will appear at First Presbyterian Church off Whitney Avenue at 7:30 p.m. The program features Min Young Kang on piano and members of the Ulysses Quartet (Christina Bouey and Rhiannon Banerdt on violin, Colin Brookes on viola and Grace Ho on cello).

Titled “When Beauty Triumphs,” the concert includes selections from Jessie Montgomery, Shostakovich, Gustav Mahler and Ludwig van Beethoven. Tickets and more information about the entire 2021-2011 season are available here. Attendees must mask up and show proof of vaccination or a negative Covid-19 test result, taken no more than 48 hours out from the event, to enter the church.

“I am very excited. It's been such a long pause,” said Kang, who founded the series in January 2019 and braved the virtual pivot last year. “While I am glad that we were able to continue online, you can't replace the sound and the vibe of a live concert. I'm very excited to go back to live performance. I'm curious what kind of energy the audience will have.”

She is especially ready to open the season with a program that explores loss, aging, emotional exhaustion, joy and perseverance entirely through music, she said. When she was building the season earlier this year, she looked to composers who had all written through personal and artistic challenges, allowing that porous boundary between their life and their work to open up.

“As much as I was looking forward to this season, I thought about what kind of music we should play for people,” she said. “What kind of music would suit this historic time after 18 months of silence? And I came to the realization that we wanted to come out to music that was born out of struggle.”

A listener can hear that tug of war in all of the works. In Jessie Montgomery’s “Peace,” written one month into quarantine, the piano tries to work its way upward, but keeps tripping over its own feet and starting over. Beneath it, violin comes in, low and tremulous. As it builds, the two instruments try to talk to each other—but find that there’s a kind of distance in between them. At one point, the violin calls out and the piano responds, in more of an anxious back-and-forth with itself than a conversation.

Kang said that the work resonated deeply with her. Montgomery, who described the piece as “making peace with sadness as it comes and goes like any other emotion,” had effectively given her permission to be sad.

In other works, composers write through extreme isolation and a certain clarity that comes with the end of one’s life. In Mahler’s "Ich bin der Welt abhanden gekommen” (“I Am Lost to the World”), pulled from his Rückert-Lieder, the turn-of-the century composer explores how alone he feels as an artist.

The keys are a slow, almost airy: they offer complete escape as a voice (in this case, a cello) soars over them. It’s a kind of melancholy that feels different from the deep, sometimes epic sorrow that populates his slightly later works. Just six years after he completed the Rückert-Lieder in 1902, his first daughter Maria Anna died of scarlet fever as a child.

"It's about a person who almost feels like he doesn't exist in the world, and he finds a place outside of the world,” Kang said. So I thought people can relate to this kind of situation, this kind of text. [During quarantine] the world was kind of on silence. It’s still beautiful and you're still alive.”

She added that she is particularly excited to be playing with the Ulysses Quartet for Beethoven’s String Quartet No. 14 n C-sharp minor, Op.131, written in the last years of the musician’s life. For her, it feels as if the musician travels to another universe in the work, of which his younger musical self was not aware. As he does, it becomes a physical and emotional marathon.

For Kang, there’s an intimacy to the pieces. Last year, the musician spoke openly about experiencing depression and anxiety as she watched the world shut down around her. For two months, she struggled to touch or play the piano. When she returned to online concerts, she got used to practicing in masks, with a shower curtain separating musicians to block respiratory droplets.

Over a year later, she said, she is still anxious that the Delta variant will prompt another wave of postponements, cancellations and closures. A colleague in Canada has told her about new cancellations rippling across his landscape as the country’s case load continues to rise.

But as long as venues reman open, she’s ready to perform. On Thursday, musicians ran through the first and third movements of Shostakovich’s piano quintet, a jump that goes from anxiety into a boundless, giddy sort of energy. Rehearsing from an apartment in Manhattan (with this reporter on Zoom), Kang leaned lovingly over the piano. She let the notes fall like drops of rain, harbingers of a storm ahead.

Strings began to fill the space, mournful as they dipped beneath the keys, and then asked the piano itself to visit those slow, dark depths. A collective breath, and the piano trudged forward, its notes delicate and succinct. A ribbon of violin rose up to meet it. For a moment, it sounded as if the group was in a child’s music box. Musicians paused, turned their pages, and launched into a scherzo that exploded in joy.

“I think playing this music for people will bring comfort,” Kang said. “We are not the same [as before the pandemic], but we're trying for a better world together. And we are better together that way. For us, as musicians, I'm looking forward to the first concert after a long silence.”