Mandingo Ambassadors Pitch In For One Of Their Own 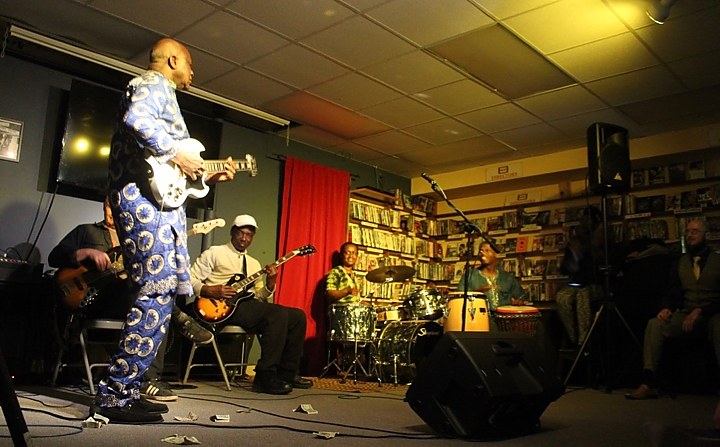 It wasn’t clear exactly when Best Video Film & Cultural Center turned into a full-blown stage. Guitar started from a chair near the front, and drifted through seats that were still filling up. Drums came in, met with horn and vocals. In the audience, attendees started moving to the beat. The Mandingo Ambassadors had officially hit their stride.

Sunday afternoon, the Mandingo Ambassadors performed Best Video in a benefit concert for founder and lead rhythm guitarist Mamady Kouyaté, who hails from the West African country of Guinea. After a hurricane leveled the house that his family was building earlier this year, Kouyaté learned that he must return to Guinea and plead his family’s case, or the government will ostensibly repossess the land. In the meantime, 20 family members are scraping by in substandard housing.

Since finding out, he has been trying to head there as soon as possible. Kouyaté said the plane ticket alone is $1,800 (he originally aimed for a departure date of May 15), of which the benefit raised $400. In addition to $10 tickets, attendees pitched in extra in a donation vase that sat by the front door.

Formed by Kouyaté in 2005, the band has been performing in multiple configurations for almost 15 years. But until recently, members played New York much more often than New Haven, despite the fact that Kouyaté has lived in the city for close to 20 years. They’ve become known for their music in Brooklyn, where members have a standing weekly gig at the Park Slope bar Barbès. But in late March, Kouyaté rocked the house at Best Video, performing a long overdue homecoming for the place he now calls home. Sunday, attendees celebrated their return.

Despite the reason for the concert, the Mandingo Ambassadors’ performance felt celebratory rather than stressful. Their usage of both traditional West African styles and modern jazz themes birthed a smooth and harmonious combination. For those who hadn’t heard it before (including this reporter), the result was music that paid homage to rich West African traditions, while also channeling a modern and accessible feel.

Fellow guitarist Mamady Koroma (also from Guinea originally) and bass player Nick Cudahy worked together to craft a backing to the various pieces, filling them with volume and depth that traveled out into the audience. Vocalist Aaron Greenberg got attendees moving with his vocals, sung largely in Mandinka.

But it was Kouyaté himself who carried the day. His performanceran the gamut from melodious, elegant leads to more punchy and aggressive parts that helped him set the tone for every single piece. He was truly the driving force in each song.

It made sense that Kouyate was able to imbue each song with such personality; he has written for the group, and guided it to its current vision. As he played on, the seats at Best Video filled with audience members, swaying in their seats reverently as the melodies washed over them. At the end of the set, a few attendees milled around, not quite ready to leave. Band members said good night to each other and tallied up donations. A buzz from the music remained, where only quiet had been before.

To watch some of Sunday's performance, click on the video, posted by vocalist Aaron Greenberg, below.