At The Institute Library, "Melted Pots" Is Food For Thought 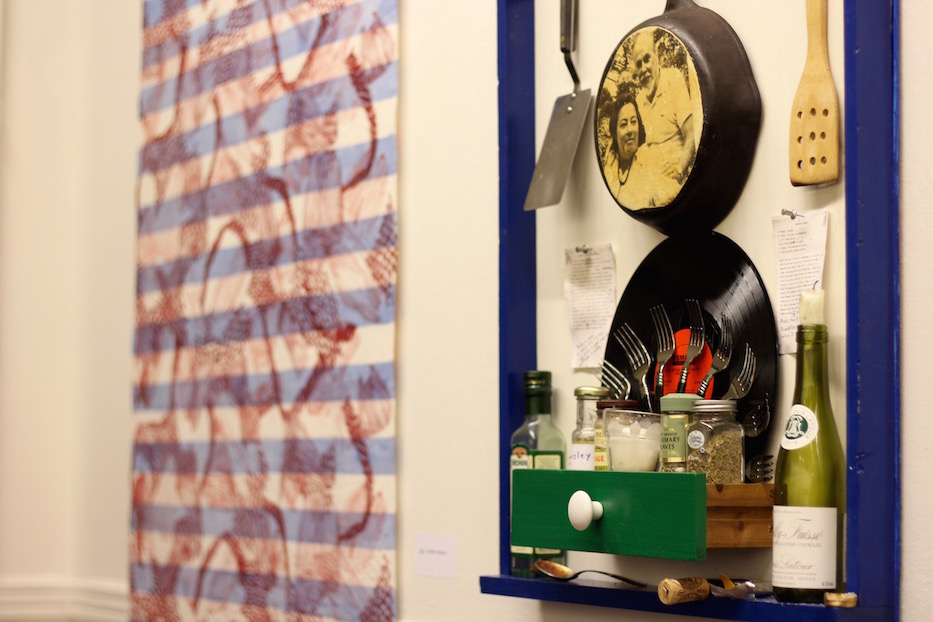 There’s almost too much to take in at once. From the bottom of the shrine, a drawer has been pulled out, jars of dried herbs arranged neatly around a white candle. An album rises in the background, forks springing from its grooved, shiny face. An emptied bottle of wine stands at attention in one corner, a bottle of olive oil in the other. On the base of a cast iron skillet that hangs above them, a yellowed portrait of a couple looks out, surveying the space. They are, doubtless, holy.

Pete Stewart’s Spirit House is one of over 30 mixed-media sculptures, photographs, recipes, and pieces of material culture in Melted Pots and Cooked Books, the latest exhibition at the Institute Library on Chapel Street. A moving celebration of food, family, migration, and memory, the show runs through Dec. 13.

The exhibition is curated by artist Martha Lewis and supported in part by a grant from the International Association of New Haven. A number of events have accompanied the show, including author talks and book signings, a pie-themed fundraiser and bake sale for the Institute Library, and a recipe reading open mic. The last will be a closing reception with a potluck and film screening on Dec. 13. 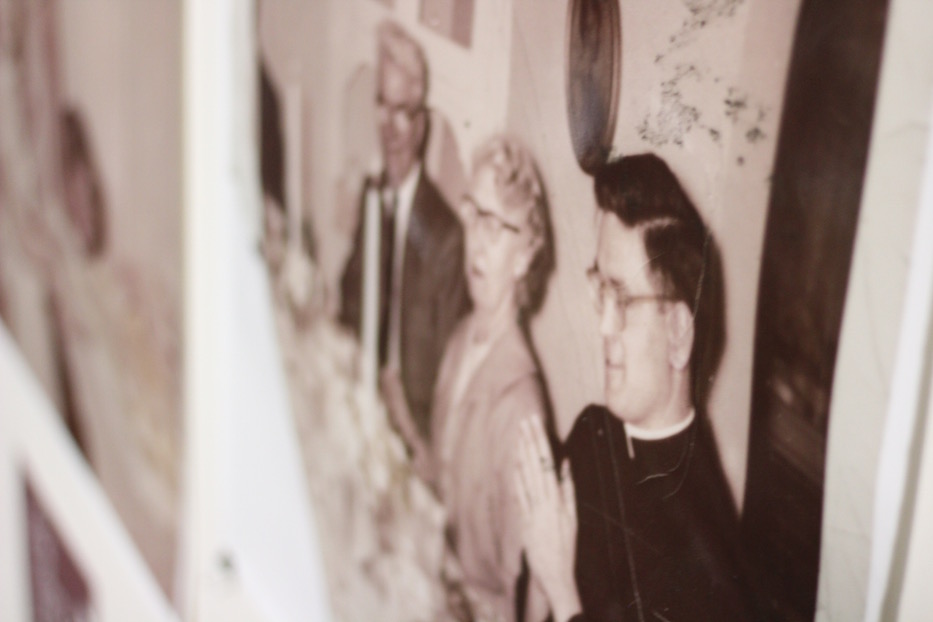 “We all come from somewhere else whether by choice or under duress (even native peoples were moved from their chosen lands to other parlayed, compromised portions of land),” reads a curatorial statement that accompanies the show. “And we bring with us memories, recipes and comfort in edible form. As these recipes travel, they also change and adapt to local products and available cooking methods. ‘American Cuisine’ is a crucible of admixed cultures, histories, spices and traditions.”

In the space’s third-floor gallery, over a dozen artists have brought that narrative to life. From the moment a viewer enters the staircase that leads upstairs, they are compelled to consume and digest—visual materials, utilitarian objects, moments fixed in time, whole cookbooks and handwritten recipes. On the stairs and in the gallery, food and family photographs from Joan Fitzsimmons and Jeanne Criscola call to the viewer almost immediately, so tidy and colorful that they seem too precious to have ever been edible.

These come from their long-awaited A Mouth Full: The Re-Cookbook, which was released in October, five years after a 2014 City-Wide Open Studios installation and performance at the New Haven Armory. A cookie sits at the center of a black and red plate, obscuring a dish that is overflowing with cherries. Another adds a splash of black, almost perfectly geometric, to a sea of turquoise around it.

In the space, objects morph into a huge dinner table, as filling for the soul as it is for the eyes. Portraits of farmers join mason jars filled with literary excerpts. Sprouting potatoes, pushed shoulder-to-shoulder in a photograph, become doll-like and other worldly. Installations of plastic on plastic stop the viewer in their tracks. A character enters a forest that has materialized entirely from ink, and makes her way through. 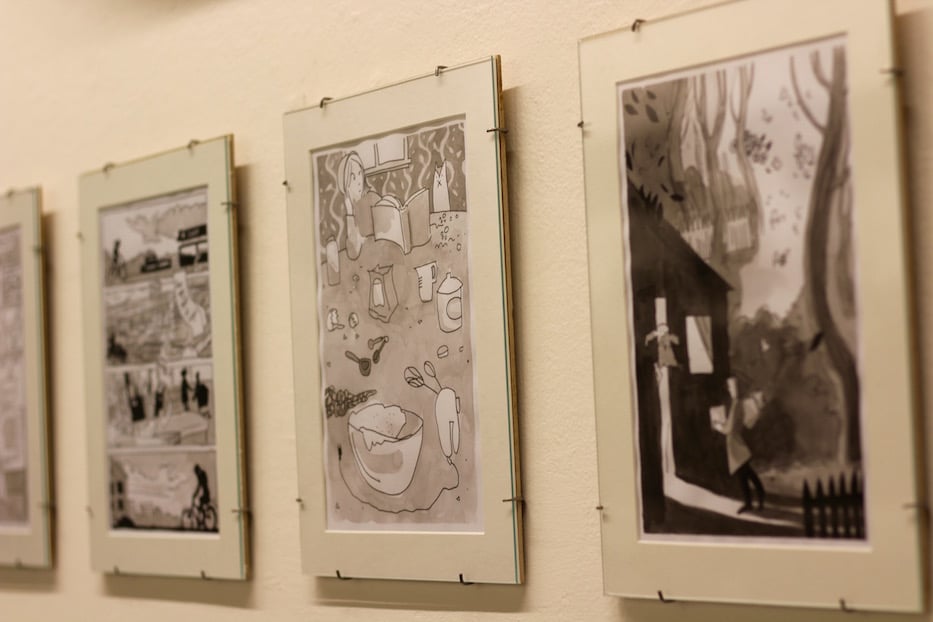 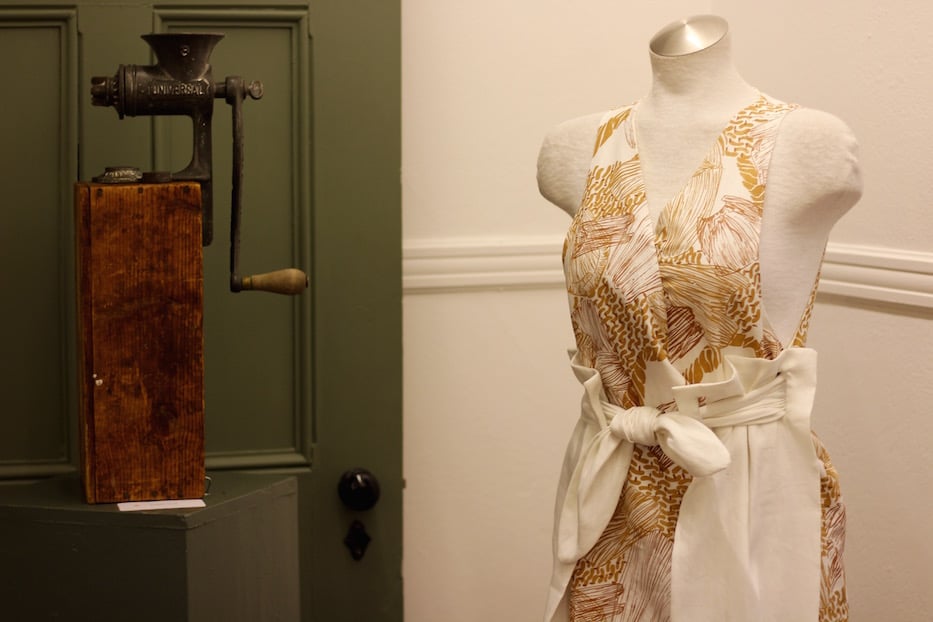 In vivid color, artist Vanessa Chiriboga has included bolts of fabric and a dress that together double as an homage to humita, a steamed corn dish that takes different forms across South America. She has divided the different parts of harvesting and making food: eager, slender hands grip ears of corn, baskets multiply over a striped length of cotton, brilliant yellow-orange husks criss-cross a white cotton dress.

The works get the viewer to think about humita in relation to the artist, to the space, and to themselves; to consider the labor that goes into production of food and of fabric; to unearth recipes that they may or may not have heard of, and learn more about them. 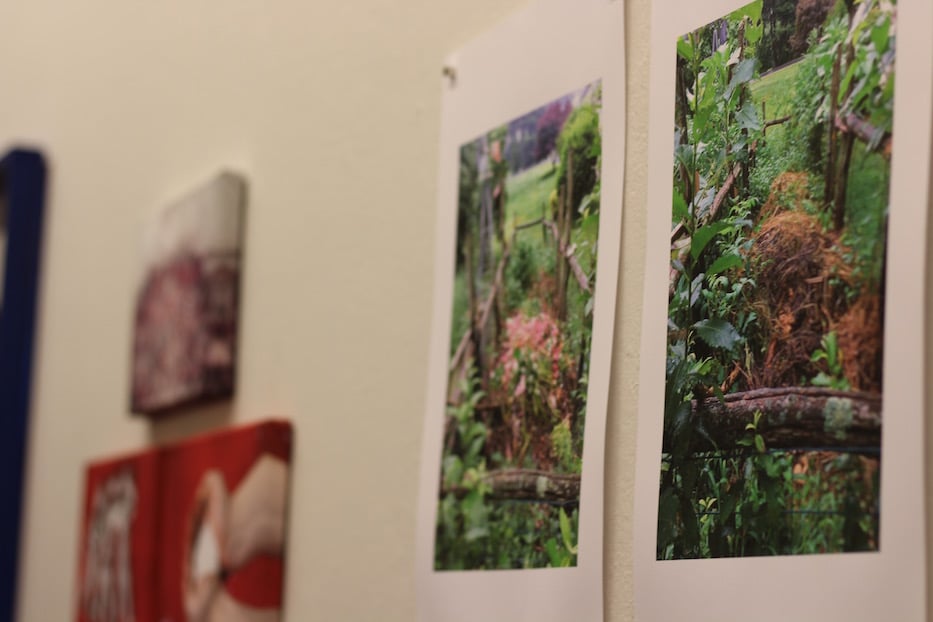 Across the room, artist Kathryn Frund has included photographs of her skyward-reaching compost heap, the contents arranged in a neat list that includes flowers, used vegetables, old leaves, and the self-seeded plants that have inevitably taken up residence. This is the natural cycle, she seems to say: decomposition, decay, adaptive reuse, new life. But the compost photographs, printed digitally in highly saturated color, are also very much art objects, oozing a Lord Of The Flies vibe from their place on the wall.

Nearby, Nadine Nelson’s No Passport Required—Wanderlust, Spices, Culture and the Fate of Cuisine Transcending Borders unfolds on the floor, with meticulous, colorful beakers of spices spread across a map of the globe. They’re visually transfixing: the spices look like layers of sediment or delicate soil samples, arranged carefully in brilliant reds, yellows, oranges and browns.

It’s a visually stunning use of what viewers may think of as household ingredients. But the work is also an appeal: Nelson urges her viewers to consider the origin stories of her materials, and what they cost not only consumers, but the workers who harvest them. It is nearly impossible to look without thinking of the long history of trade (the Silk Road is maybe the most immediate reference, but not the only one), of trade wars and embargoes, of exploited labor and also of recipes that have morphed and shape-shifted as they spread. 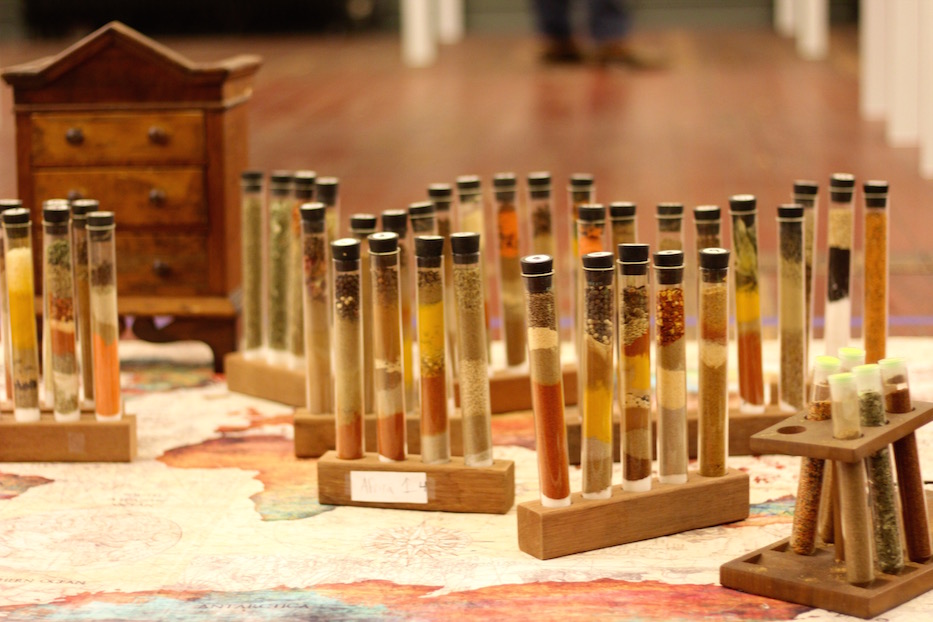 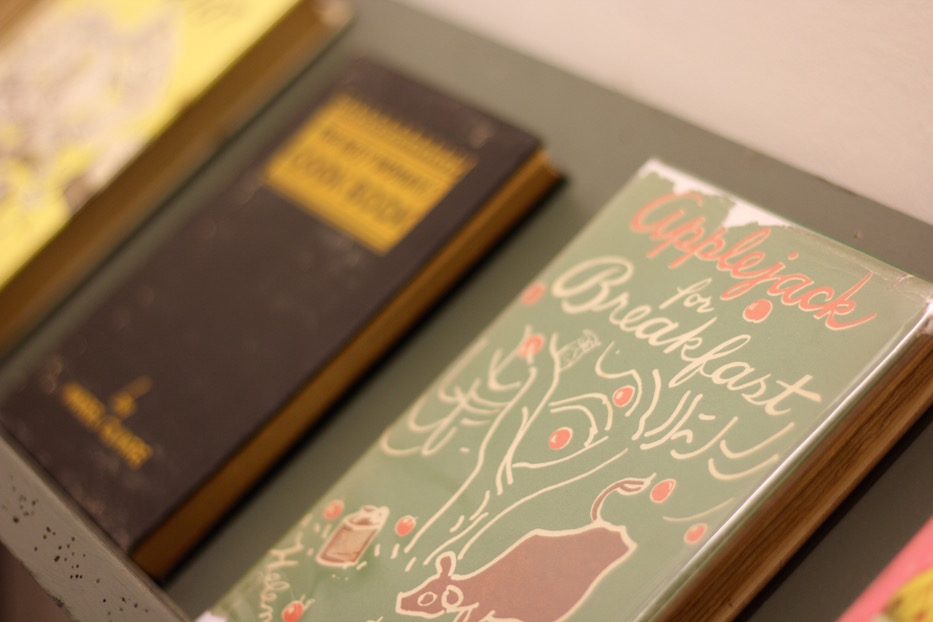 Throughout, Lewis has also integrated cookbooks and culinary narratives from the Institute Library, titles sprawling out like one long, exhilarating and exhausting culinary road trip. There are forgotten, now semi-rare titles like Helen and Alfred Campbell’s 1946 Applejack For Breakfast, which documents a couple’s journey from (ostensibly cosmopolitan) Princeton to the Delaware Valley. Artists have also contributed their own, including a book (never published) by musicians Marlene and Otto Kauder, who happen to be the parents of Artspace New Haven Director Helen Kauder.

But it is also a study in social movements, tracking the outdated but enduring assumption that the kitchen is the realm of women and hired help. There is Michael Dorn’s Tycoons in the Kitchen: A Cookbook, listing the recipes adored and consumed some of the world’s biggest business tycoons, who never had time to prepare them themselves. Mabel Claire’s 1925 The Busy Woman’s Cookbook looks out from another shelf.

What sits at the beating heart (or, perhaps more accurately, the growling stomach) of the show—and quite deliberately blurs the line between fine art, material culture, and archival documentation—are a number of inherited recipes and culinary heirlooms. Artists have integrated brightly illustrated and annotated pages, from soft oatmeal cookies to treats wrapped delicately in banana leaves. 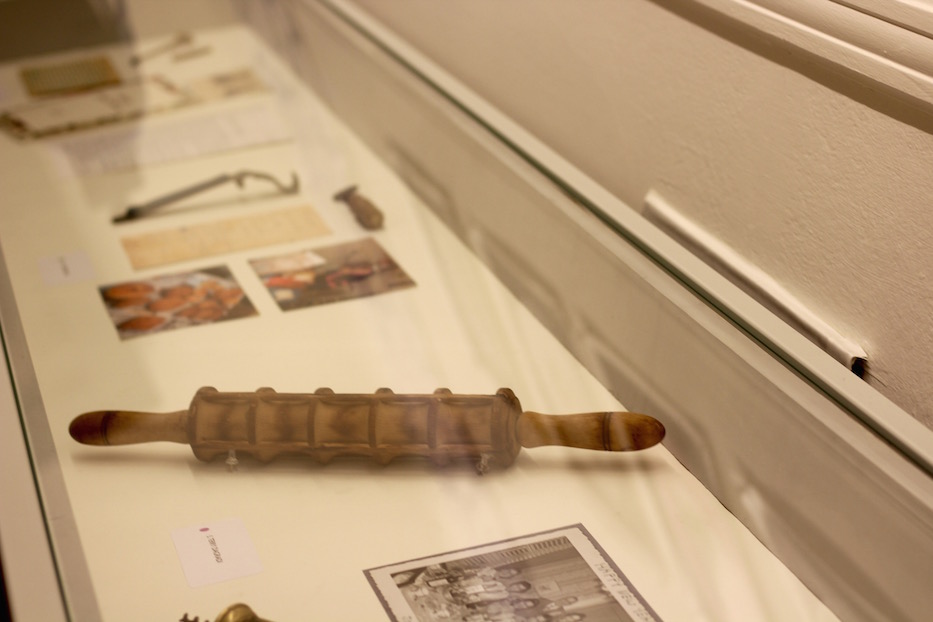 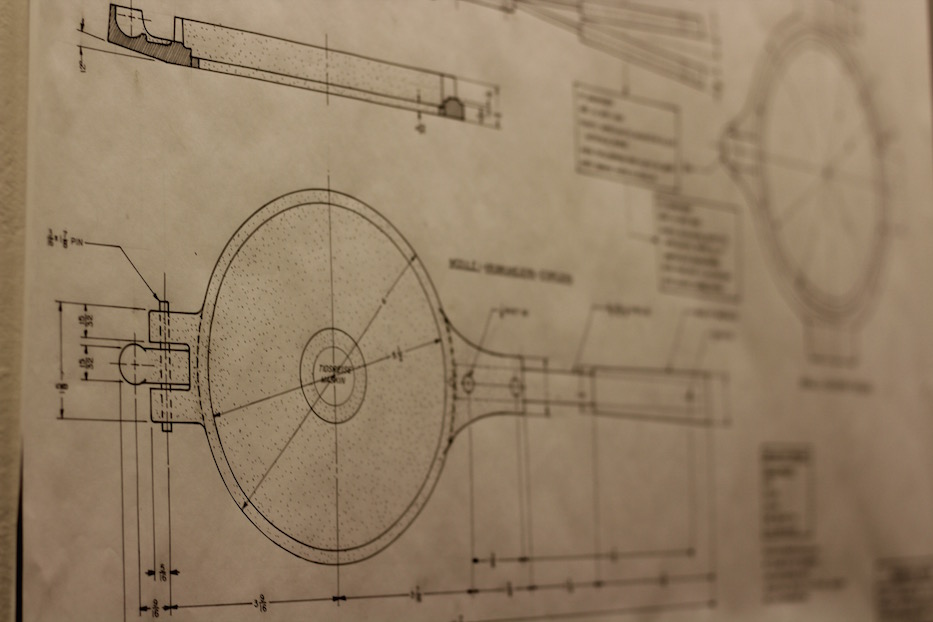 Many come with stories, opening whole worlds to their onlookers. From artist Clymenza Hawkins, viewers can study a wooden bread bowl passed down from a family member who was a freed slave, imagining the number of hands that kneaded and kneaded in that carved-out space.

Musician Lys Guillorn conjures her extended family, pairing recipes for Easter bread with well-loved photographs that whisk the viewer to an earlier time. Scott Schuldt has paired a schematic for a time machine beside his Jøtul Krumkake Iron (viewers who were lucky enough to make the opening may have gotten some of the sweet, delicate treats it produces).

The objects keep going, building a meal that criss-crosses the globe. Language Chef Robert Aiudi, who spoke at the library last month, has included a vintage metal meat grinder (in the show it is dated circa 1910) and an old, weathered photograph of his great grandparents and their children. 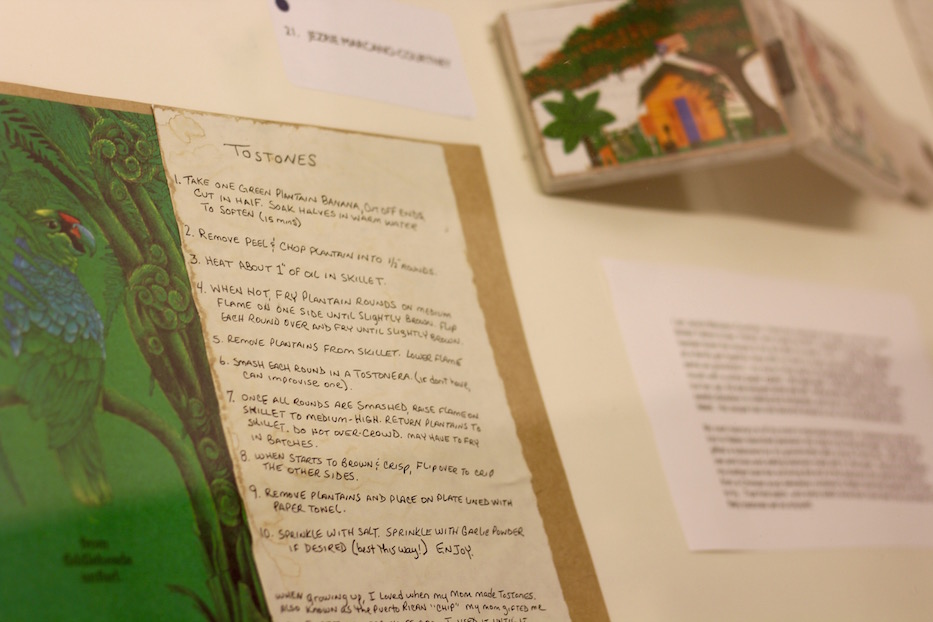 Artist Jezrie Marcano-Courtney delights with a richly designed recipe with tostones and accompanying press or tostonera, delighting viewers as she tells the story of her mother’s quick thinking when the mold once broke.

“After years of use and love and eating tostones made with it, it fell apart,” she recalls in an accompanying text. “Sad but not defeated, my mother took the surviving flat end of the tostonera and used the plastic top from a Chinese soup takeaway container to flatten blanched plantains … that first batch, and every batch since then have been the crunchiest and [most] flaky tostones we’ve enjoyed.”

In a long case, Sanctuary Kitchen volunteer Donna Golden has placed a spread of objects that spirit the viewer back, then forward. There’s an Afikomen bag hand-made and hand-embroidered by her great grandmother in the former Russian Empire, from which she fled in 1906. Beside it sits a handwritten recipe card for noodle kugel and announcement of the dish on a dinner menu—that President Barack Obama served at a Passover dinner at the White House (she points out the irony: that noodle kugel is not exactly kosher for Passover). 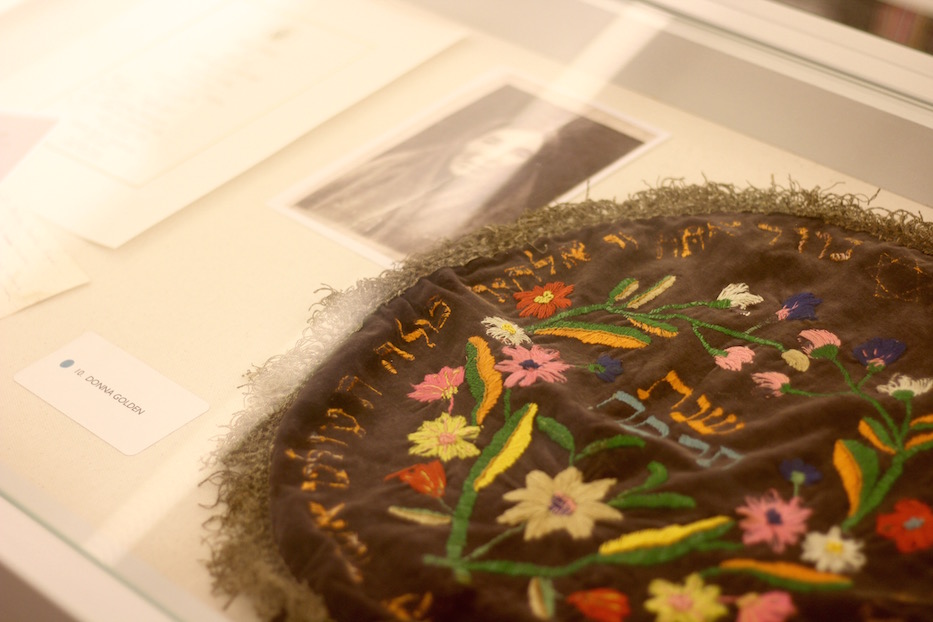 There’s a kind of unspoken grace to this sharing, which covers a good culinary portion of the globe. Almost all of the works are tied to memory; many of them also rely on a sort of trust between the artist and their onlooker. There's the expectation that viewers will cherish these recipes and treat them with care, or at least absorb their full weight.