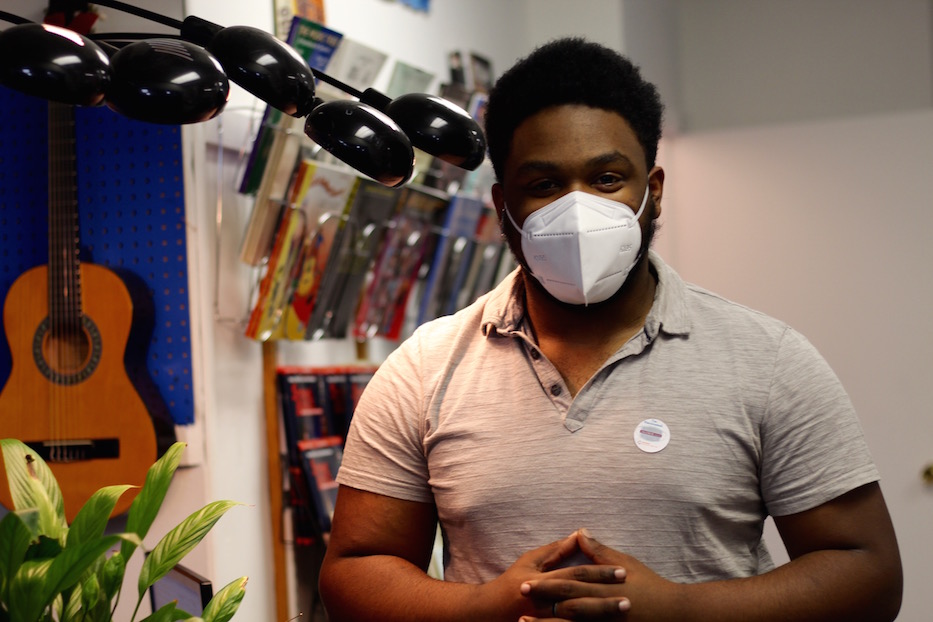 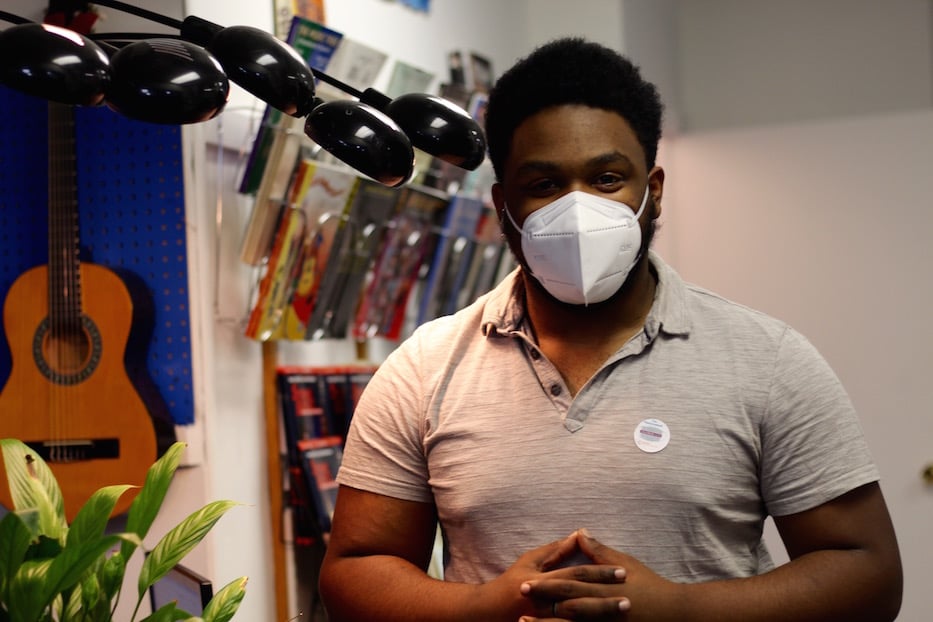 Ty Scurry: "A school where the low-income students could come, and they could feel safe. Because I was that student in school." Lucy Gellman Photos.

Strains of “Somewhere Over The Rainbow'' drifted through Family Music Center as the sun sank over Dixwell Avenue. At her ukulele, 6-year-old Olivia Clark hit every note, her small, muscled voice winding up towards the ceiling even behind a mask. Across from her, teacher Nick Blanchette strummed along. Watching from ten feet away, Ty Scurry beamed. It was the music school he had imagined all along.

A son of New Haven’s arts community, Scurry is the new, 19-year-old owner of Hamden’s Family Music Center, a small, cheery storefront on Dixwell Avenue sandwiched between two residential homes and a strip of retail shops. As he rolls into spring, he’s slowly building the center from a commercial storefront into a music school and arts academy. It is his newest role after years as a student artist, director, peer mentor, and a youth worship leader.

"When I came in, I really wanted this to be an arts school,” he said during an interview at the space. “A school where the low-income students could come, and they could feel safe. Because I was that student in school. I didn't have the money to go to a Neighborhood Music School. So I was like, I need to create something for them.”

For over a decade, Scurry has immersed himself in the performing arts, from roles on center stage to far behind the scenes. Born in Rhode Island, he moved to New Haven when he was nine years old. While ministry runs in his family—Scurry’s grandmother and grandfather are ministers, as are his dad, uncle, great-grandmother and aunt—the stage and the drum set also called to him. In fifth grade, he cycled through three schools before finding a home at L.W. Beecher School, where teacher Amy Brayman took him under her wing.

When he was in sixth grade at Beecher, Brayman needed male extras in Annie. Scurry was “that Black kid who could sing,” and he told her he was happy to try out. His goal was a background role, he recalled—maybe the character Rooster. He got Oliver Warbucks instead. Then he landed Teen Angel in Grease. By eighth grade, he was Shrek in the school’s production of Shrek. In his words, “I never wanted the spotlight, but the spotlight came to me.” 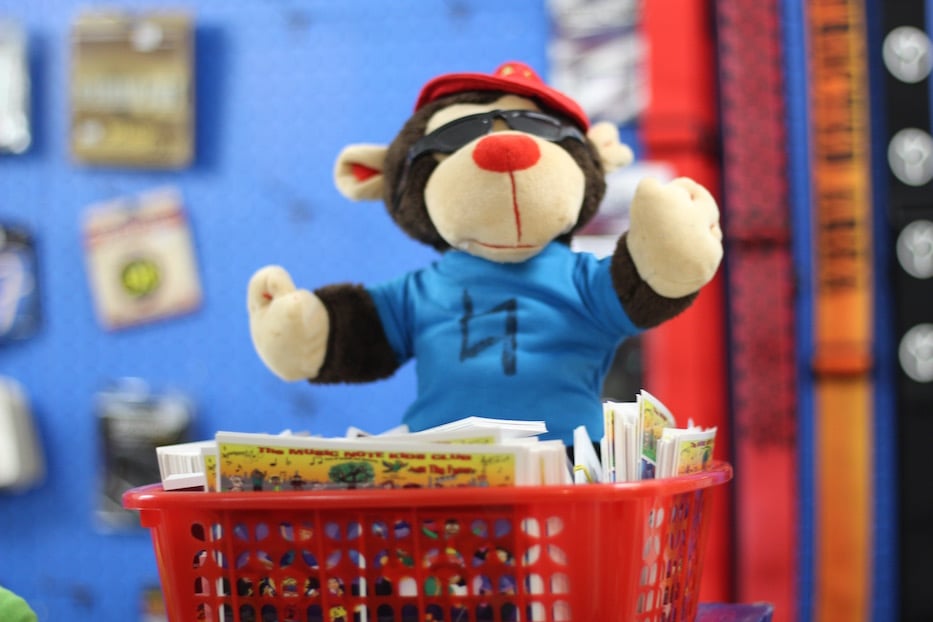 Puppets and educational materials from the New Haven based Music Note Kids, which have partnered with Family Music Center.

Through those performances, he caught the performing arts bug. In high school, he landed the role of Seaweed in a production of Hairspray at Wilbur Cross. It led to other regional performances of the show, as well as roles in Cross’ performances of Sister Act and Life After High School. He fell in love with the drums, a passion he now brings to his church family at Temple of Latter Rain in New Haven. After graduating, he had a chance to form and supervise a drama club at James Hillhouse High School. He was directing The Wiz there when Covid-19 put the performance permanently on hold.

Even during those years, Scurry knew that he wanted his own performing arts school one day. As a freshman at Cross, he started a Google doc dedicated to the idea, which now numbers over 200 pages. When his classmates talked about plans to become police officers, firefighters, lawyers and veterinarians, he fantasized about soundproofed studios and band classrooms. By high school graduation, he dreamed of one day being like one of the teachers who had nurtured him. He said that band teacher Jeremy Barnes was especially influential in keeping him motivated, even when he “wasn’t the easiest student to work with.”

“His ability to see worth in me even when I didn’t see worth in myself, for me that’s what I wanted to bring to the next generation of artists that are gonna come through New Haven,” he said. “I just want students to be able to experience the arts in a way that they've never experienced them before."

He never expected the opportunity at Family Music Center to come when it did. During the pandemic, Scurry was laid off from a restaurant in downtown New Haven, where he had been working part time while also mentoring drama students at Hillhouse. For a few days, “something told me to type in ‘family music’ on Indeed.” At first, he resisted it. Then he saw an ad on social media: Family Music Center was looking for a manager. He said it felt like fate. 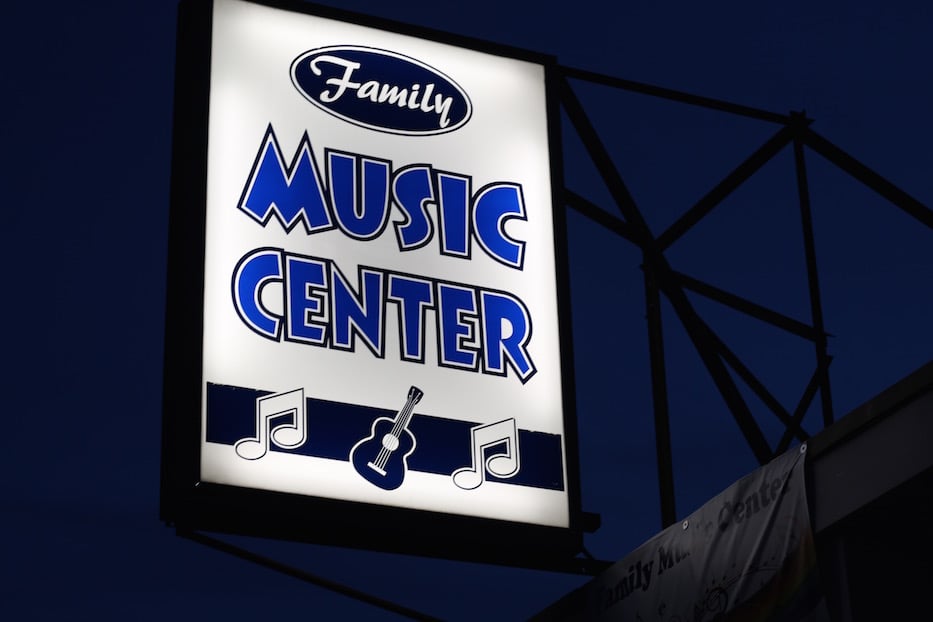 Family Music Center, meanwhile, was going through changes of its own. The pandemic has been particularly hard on the shop, which was known for decades for both retail and music lessons. In March of 2020, then co-owner Robert Fortuna (or as he was more commonly known and loved, simply Bob) closed the storefront as businesses shuttered to stem the spread of Covid-19. Fortuna had health problems; he entered hospice care late last summer. In September, he passed away at the age of 70. His brothers, John and Thomas, posted the manager position in an attempt to keep the space going.

In the fall, Scurry interviewed with Thomas Fortuna, but didn’t initially get the job. Meanwhile, he was sending out job applications one after the other, in a routine that has become familiar to millions of Americans during Covid-19. His phone got shut off for two weeks when he couldn’t pay the bill. After a friend offered to cover the expense, he saw that he’d missed a message asking him to take over as manager.

“At that moment, it did feel like divine intervention,” he said. “I was very excited.”

Initially, the job wasn’t what he expected. A week into Scurry’s new job as manager, Thomas Fortuna called him into the office to say that he was going to have to let him go. The store, which had always been Bob’s baby, wasn’t making money. Scurry went home thinking that he was out of a job. He asked God why he was being “tossed around,” he said. A day later, Fortuna asked him how he would feel about taking over the center.

Scurry prayed on it. He looked to role models including Brayman, Cross drama teacher Salvatore DeLucia and Billy DiCrosta and Neil Fuentes, who run the New Haven Academy of Performing Arts in East Haven. He talked with his “spiritual father” Charles Simmons, who is his pastor at Temple of Latter Rain. The church pledged its support, which he said has been transformative. Despite running the center full time, he never misses a Bible study, service, or weekly baking session for Simmons’ small cookie business. He is still the church administrator and leads its youth group.

“Everything came full circle,” he said. “A lot of it was praying, and trying to really figure out what God wanted for me. I looked at this, and was like, ‘This is what you’ve wanted forever. And it’s sitting in your lap.’ And so, I had to realize that some of the best things in life are sitting directly behind fear. And so afraid as I was, I signed the paperwork and I began this journey.” 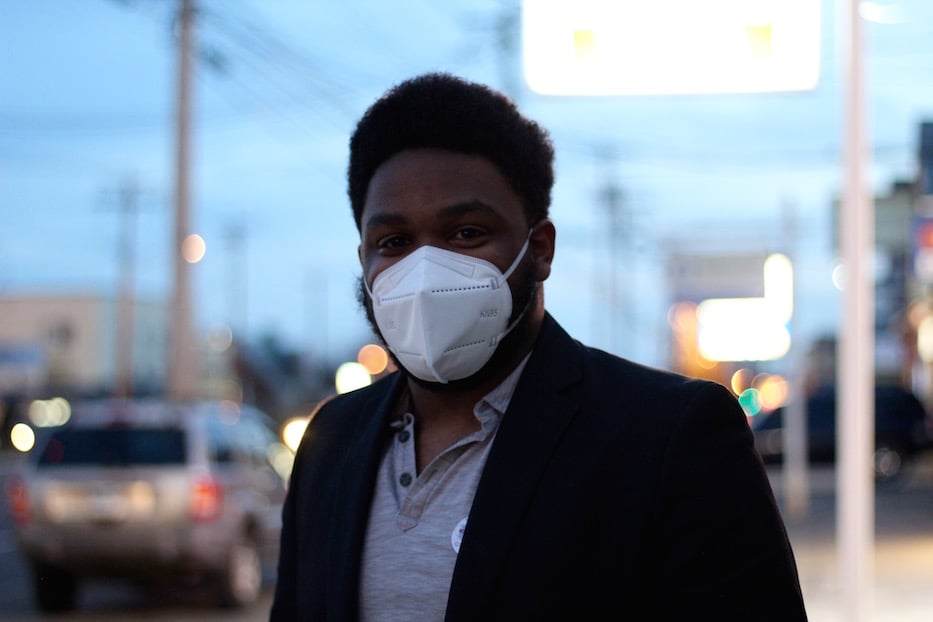 Scurry officially took over on January 1 of this year, when the ground was still perennially covered in a cake of snow and ice. In February, he kept working after a fire tore through his family’s Newhall Street home, displacing him, his parents, and his five siblings. He said the center gives him a sense of purpose and consistency as he and his family navigate the future from the hotel where they are temporarily living.

Because the transition to ownership happened so quickly, signs of Bob Fortuna’s gentle footprint are still everywhere. Lonely guitars, copies of sheet music, instrument straps, and albums still peek out from the front counter and back room. Walls throughout the store are covered with blue soundproofing foam, a nod to the fact that the space has always been a home for making joyful noise. Scurry said that the Fortuna brothers are still helping him with rent.

In January, his first priority was offering more lessons, particularly to kids who didn’t have music classes in their schools or were priced out of other programs. Ultimately, he said, he wants the center to feel like a Boys & Girls Club for arts and culture. Through the job site Indeed, he recruited 20 music and visual arts teachers who could be on standby. He started building community partnerships with The Music Note Kids Club and a local church that is interested in worship services in the front room. Because of Covid-19, he sanitizes constantly and keeps air purifiers running. The store has strict mask and capacity mandates.

While “music” may be in the name of the center, he added visual arts, drama, dance, and musical theater to the mix, in a rotation of classes that is still growing. Although lessons have been slow to start, he’s hopeful that they will pick up as news of the center spreads, and parents start looking for summer opportunities. 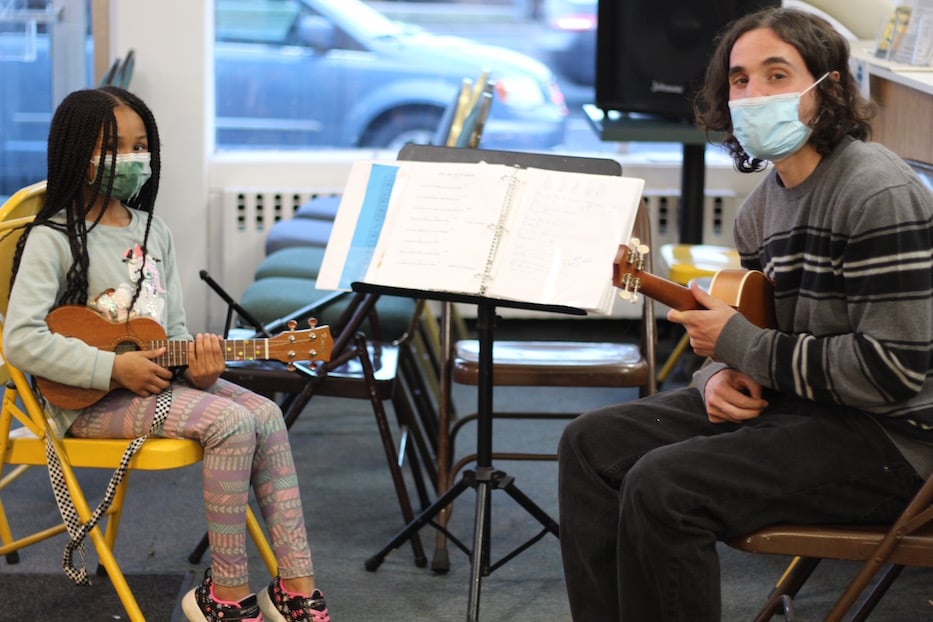 Olivia Clark, who is six, and teacher Nick Blanchette.

He is watching the state’s Covid-19 guidelines to see if the center can offer an in-person drama camp and recital this summer. During the summer months, he also plans to start a community marching band. While most programming centers youth, he said that everyone is welcome.

“That’s what it’s all about,” he said. “We serve students from five to 500. We’re the arts school for everyone.”

Eventually, he said, he hopes to do a multi-stage renovation and expansion of the building, for which he is slowly collecting donations. Family Music Center is charming but old: its ceiling tiles show age and the lights flicker in some rooms. In what is now a practice room with two pianos, he wants to build an arts and media center with Mac computers and a table for visual arts classes. Downstairs, where music classrooms are partitioned off with shower curtains, he sees a podcast studio taking shape.

Even now, the space has an invitation folded into it. From the outside, rainbow-colored banners hang across the door and windows, advertising music lessons. An old-school fluorescent sign glows blue and white, a familiar searchlight on the busy road. A bell gives off an electronic jingle when customers step inside, often pulling Scurry out from his office or the back room.

On a recent Tuesday, six-year-old Olivia Clark and ukulele and guitar teacher Nick Blanchette set out in the front room, studying sheet music for “Somewhere Over The Rainbow” and “You Are My Sunshine.” Olivia came into the center at the beginning of March, after months of teaching herself over YouTube. In the front room, her voice wove in between the sound of her playing. Her mom pulled out a phone and recorded.

“I pride myself in creating an atmosphere that is like the old Family Music Center, but also my own,” Scurry said. “As much as I want to live off that legacy, my thing is creating my own legacy. That’s what I brought to Hillhouse, and it’s also my life theme. Creating a legacy in life, on the job, in church. What is your legacy? My legacy is changing people’s lives.”

Family Music Center is located at 1396 Dixwell Avenue in Hamden. Find out more about programming on its Facebook page.