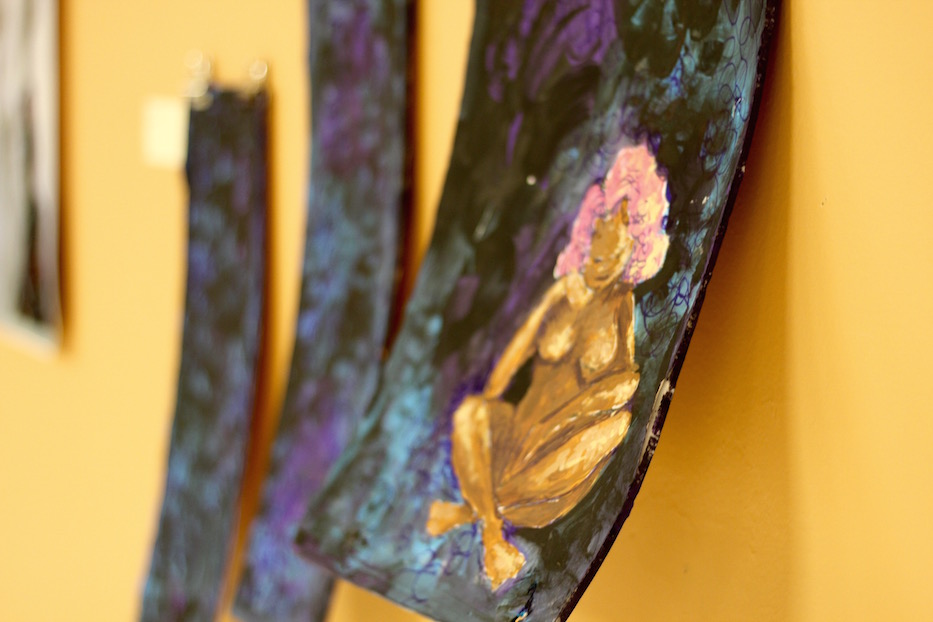 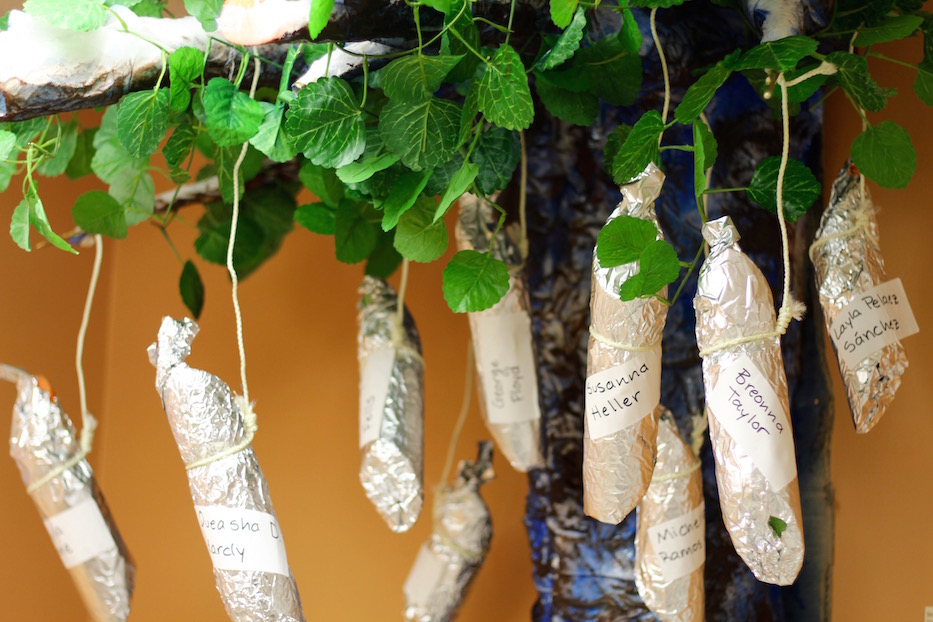 At first, the tree looks as though it is growing right out of the wall. Leaves extend from a corner of the room, deep green against a swirling blue and black trunk. Silver bundles glint from its branches, hanging heavy. Only when a viewer gets close can they see the names, written in black marker. George Floyd. Dominique Fells. Breonna Taylor. Queasha Hardy.

Below, they are layered on top of each other. Rick Rojas. Tony McDade. Brooklyn Deshauna Smith. Each leaves a hollow, sour feeling in one’s stomach.

Strange Fruit is a work in Reflections, a one-woman show from artist Tia Lynn Waters running at the New Haven Pride Center through Nov. 29. The exhibition celebrates Waters, who is known more affectionately by her drag name Bubblicious or Bubbles, for her long-spanning career and artwork in New Haven. It comes during programming for Trans Awareness Week, most of which is virtual due to COVID-19.

“It's probably one of the most powerful, if not the most powerful, exhibit that we have done since the gallery started in 2017,” said Patrick Dunn, executive director at the center. “It just boom, hits you. I'm really overwhelmed and excited.” 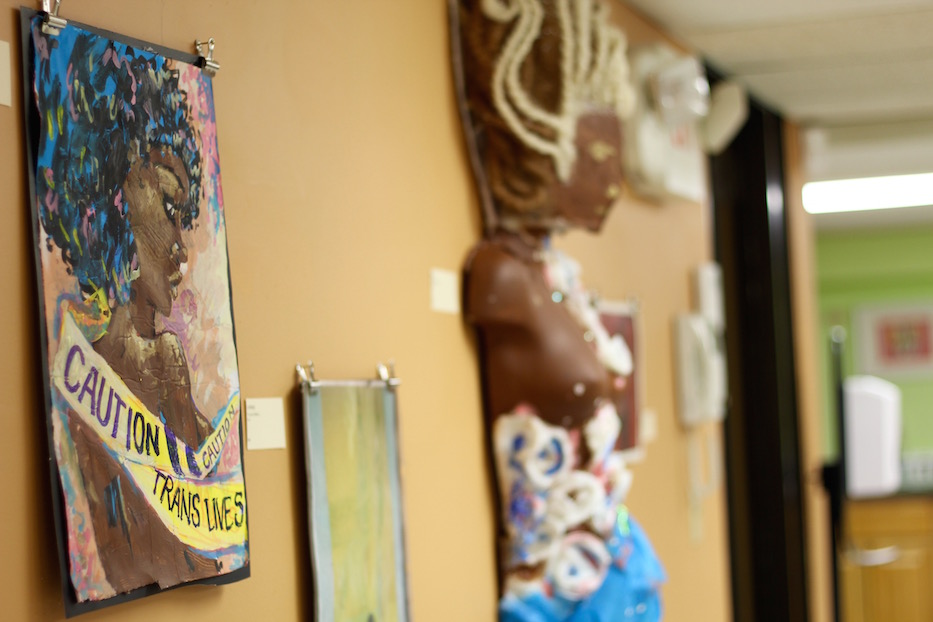 In the orange-walled gallery, Waters tells an intimate, searing and succinct story of race, transphobia, anti-Blackness, and personal transformation that travels from New Haven to the American South to somewhere other-worldly. For the artist, it is also a homecoming: she grew up in New Haven, and transformed the city’s history of drag and activism when she stepped out onstage over three decades ago. Dunn referred to her affectionately as a “den mom,” who has constantly cared for those around her.

She unfolds a history in interlocking vignettes, some more personal than others. A Black man drives through a sundown town, his eyes wide and blue-white with terror as his hands grip the wheel. A Black woman with cotton-candy waves of hair sits cross-legged, her chin resting on her hand as she basks in the glow of her skin. On another wall, two huge, sculpted merfolk pop from the walls, their heads tilted as their tails extend and flip in bright color. Her use of painted fabric and news clippings give the show a quality that is both sculptural and archival. 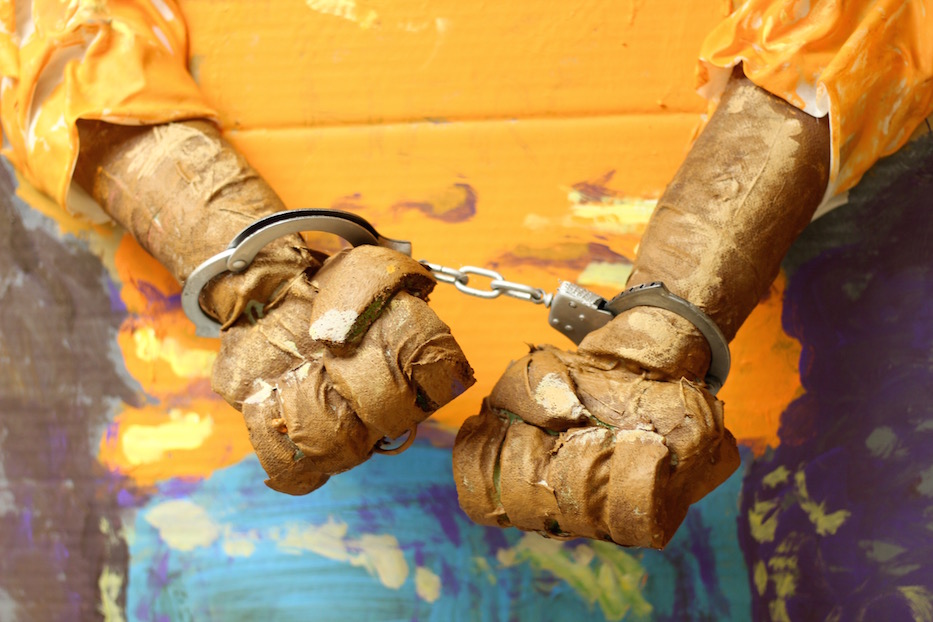 Beside Dunn’s office space, a multimedia work on cardboard asks a viewer to come closer and look hard. A Black figure wears an orange hoodie, rumpled and catching the light as their head turns above. Their back is to the viewer; their hands curl into fists. A pair of handcuffs attempts to keep them unwillfully still. Their arms rise off the cardboard, as if trying to escape from the piece. A purple arrow points up at their head. DO NOT/PUT KNEE/HERE, a message reads.

In an artist’s talk Monday, Waters said the work came from not just the murder of George Floyd earlier this year, but by the ongoing epidemic of state-sanctioned violence across the country She called Floyd’s death a public lynching, in which cell phone cameras and bystanders replace mobs of people. In those situations, she often sees members of law enforcement acting as “judge, jury, and executioner,” with no real system checks and balances in place.

“As much as I'm happy that conversations are happening—until actual laws are passed, until actual people are held accountable for these transgressions, I just see a lot of mouths moving,” she said. “And that's frustrating to me. Because those are my sisters, brothers, aunts, uncles, cousins that I see plastered on the T.V. every other night.”

So too in Strange Fruit, inspired by the present-day aftershocks of Billie Holiday’s eponymous song. In the work, Waters collapses acts of violence against Black and trans bodies—sometimes one in the same—as she depicts a gnarled tree with bright, veined green leaves and bundles hanging from the branches. If a viewer gets close, they can see that each wrapped name hangs from a tiny noose that the artist has fashioned by hand. The branches drop with their weight. 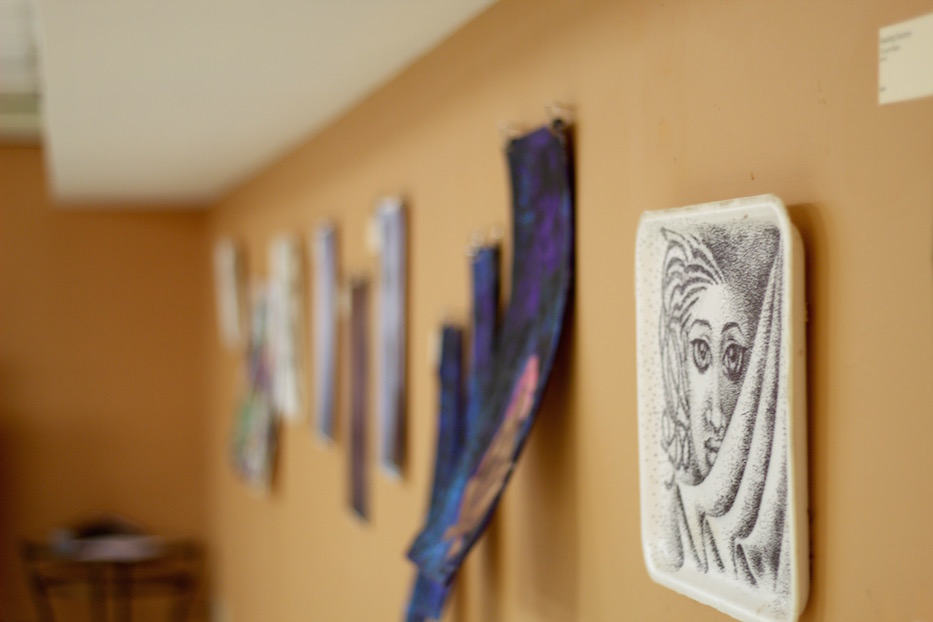 A painted wooden plank sits beside it, yoking segregation-era policies, law enforcement, and the rampant over-policing of Black Americans with the words “Colored/ Excessive Force.” A purple arrow in the center of the image pushes a viewer on, insisting on the urgency of both the piece and the show as a whole.

The works are not just trenchant: they are also often deeply personal. On one side of the room, viewers come face-to-face with a number of styrofoam hospital trays on which the artist has etched words and faces in careful, meticulous script. In the first, letters explode across the tray’s soft white expanse, spelling out her name. A suite of bubbles surround the word, turning it into a verifiable party. It feels like a declaration: Bubbles is here, standing before the viewer. She’s ready to share her journey.

And she does, over and over again. In Covid and Awaiting Tomorrow, Waters contrasts intense isolation of COVID-19 and the possibility of a kinder post-pandemic world. In the first, the artist has depicted herself on the last of three panels, against a background of marbled blue, black and purple. The panels are other-worldy: they channel bright nebulae and the yawning blue-black of outer space. At the bottom of the final panel, she is quiet and contemplative: she looks over her body and sits alone with her thoughts. 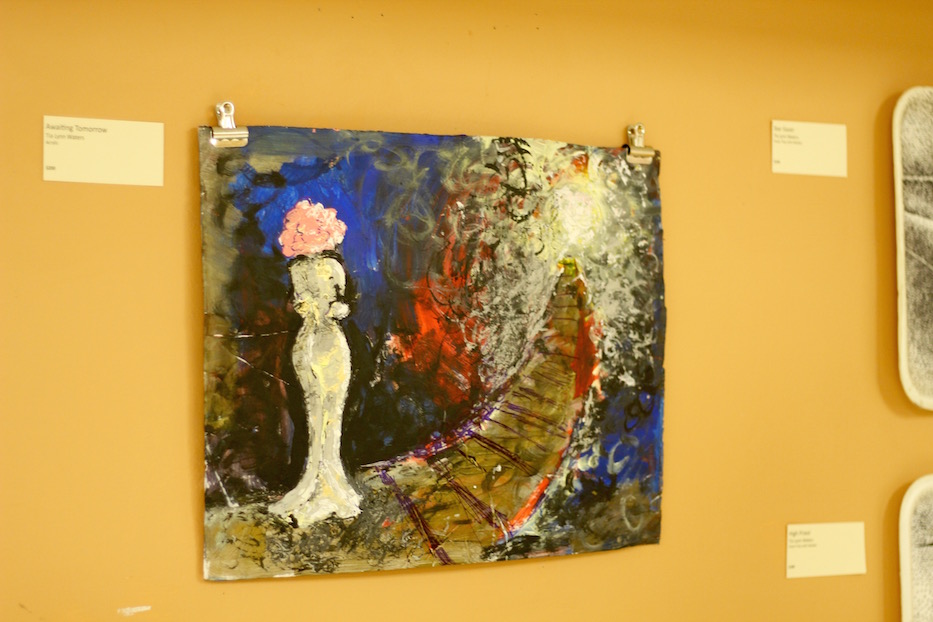 In the second, she rises with her back to the viewer, a yellow- and silver gown hugging her curves. The cotton-candy bob is back, bouncing just above her shoulders. In front of her, a bridge stretches out plank by plank, winding forward. Around it, clouds of color bloom into focus, as bright and sudden as fireworks. There’s a light, shimmering, at the end. Back at the other end, she is still, as if deciding on the right time to step out and follow the tunnel.

Throughout the show she has also sketched, painted, and sculpted her own transformation with elegance and triumph. There’s a sense of being in a time machine: Waters takes a viewer back in time to the 1990s, when she was still doing fashion design for an annual benefit at AIDS Project New Haven (now called A Place To Nourish Your Health). She springs forward with her merfolk and works on foam, portraits that feel candid but also glamorous and joyful. 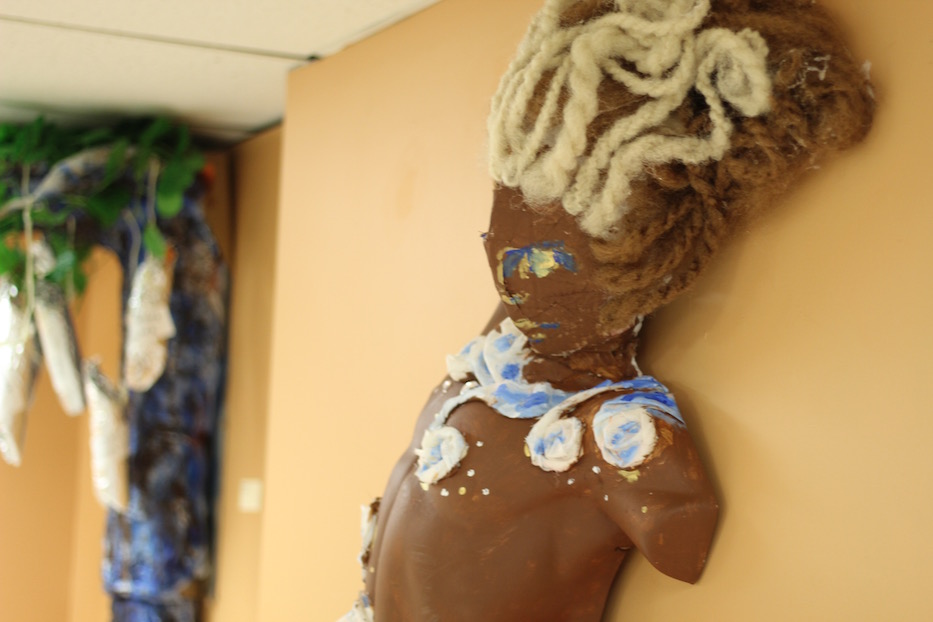 She glides through time as if it is porous, each second informed by the one before it. The work, in turn, lives at as many intersections as she does. It is a truth-telling, a galvanizing call to arms, and a nod to both those who have come before and those who she has enabled to come after her. It is a show about survival, sweeping enough to hold a great weight and a greater hope for systemic change.

“I come from an era where you were helped, and you helped the next person,” she said. “You helped the next generation. Because it's just gonna better everything for us—as performers, as trans [people]. Bringing happiness and love into the world in one way or another, it can never go wrong. I'm a firm believer in that.

“I believe if you have a platform, if you have any way of saying something, make it meaningful,” she continued. “There are times when I just want to do a [drag] number. Or there are times when I don't want to think so hard. But we're here for such a short time. If there's something to be said, say it now, because tomorrow's never promised. You never know who you're gonna help by saying something.”

Reflections runs through Nov. 29 in the center’s main gallery, which is open by appointment only. A virtual tour is also available on the center’s Facebook and YouTube pages. This year, Waters is one of the recipients of the Arts Council of Greater New Haven's 40th annual arts awards. The virtual ceremony is planned for Dec. 2 from 6:30 to 8:30 p.m.