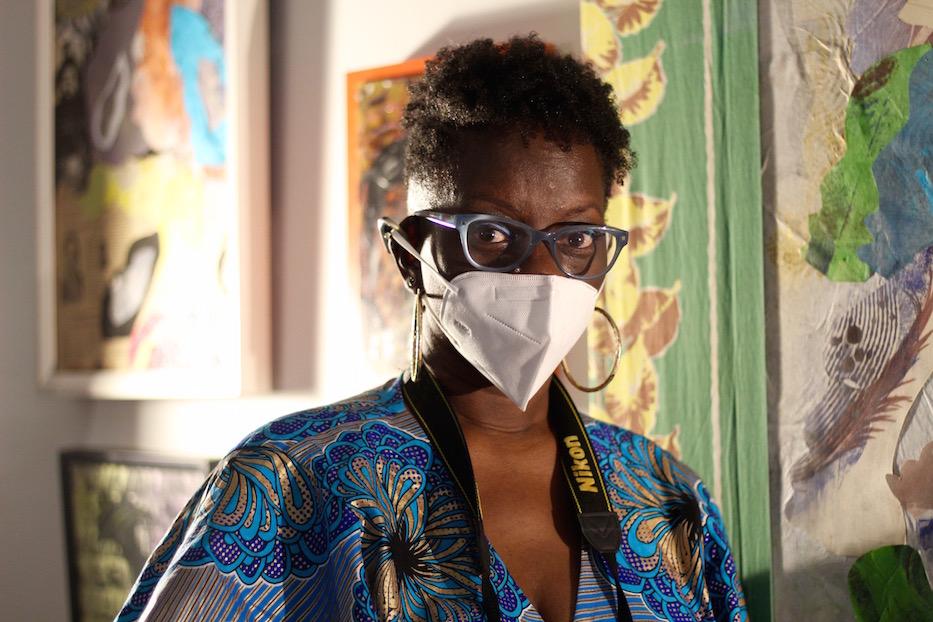 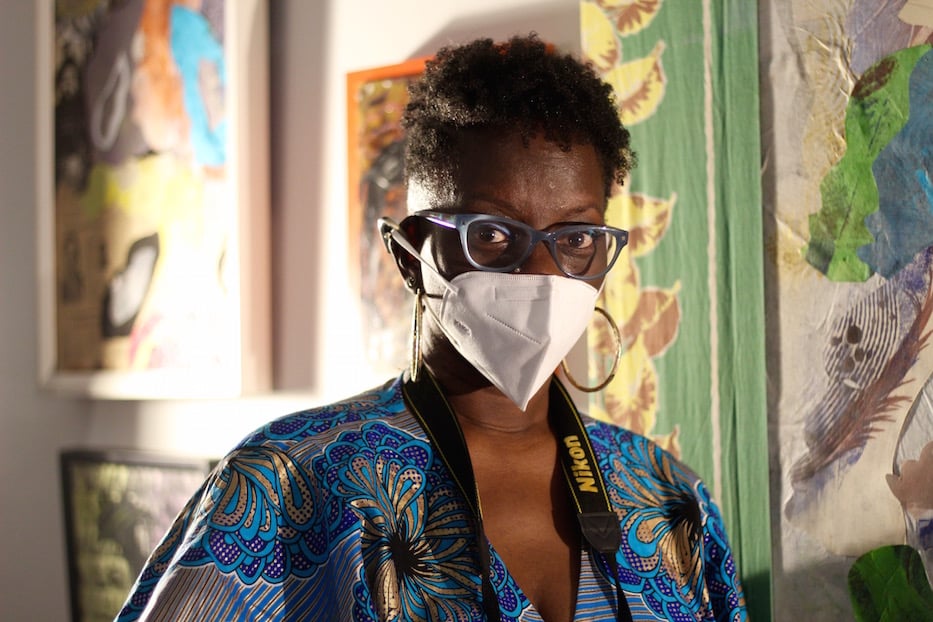 The artist Shaunda Holloway at People Get Ready bookspace on Whalley Avenue. Her solo exhibition, Strong Ones, runs through Oct. 31. "Lucy Gellman Photos; all artwork by Shaunda Holloway.

Five faces crowd the frame, looking out at the viewer from a brilliant orange backdrop. One sports a crown of thick black hair; the others triangulate behind her. Red paint streaks the image, landing on their cheeks and necks. On the surrounding canvases, leaves climb and rustle in yellow and brown. A two-toned face sports long, gleaming cowrie shell earrings collaged onto a wooden board. Big, blooming flowers appear over old articles about the “war on crime.”

All of the images are part of Strong Ones, a solo show from artist Shaunda Holloway running at People Get Ready Books (PGR) through Oct. 31. For Holloway, it marks a sort of full circle moment as the bookstore turns two years old and celebrates surviving a pandemic with one of its earliest supporters. The show unfolds in PGR’s community room, located in the former home of Music Haven off Whalley Avenue. Masks and social distancing are required.

"The thing that struck me is what we're all going through right now with this pandemic, and the strength it takes to endure,” she said at an opening on Friday night. “Life in general, but wearing a mask 24/7. You know? First you don't have to wear a mask, then you do. So that takes a lot of endurance. A lot of the pieces—I hope that they encourage people to continue to be strong." 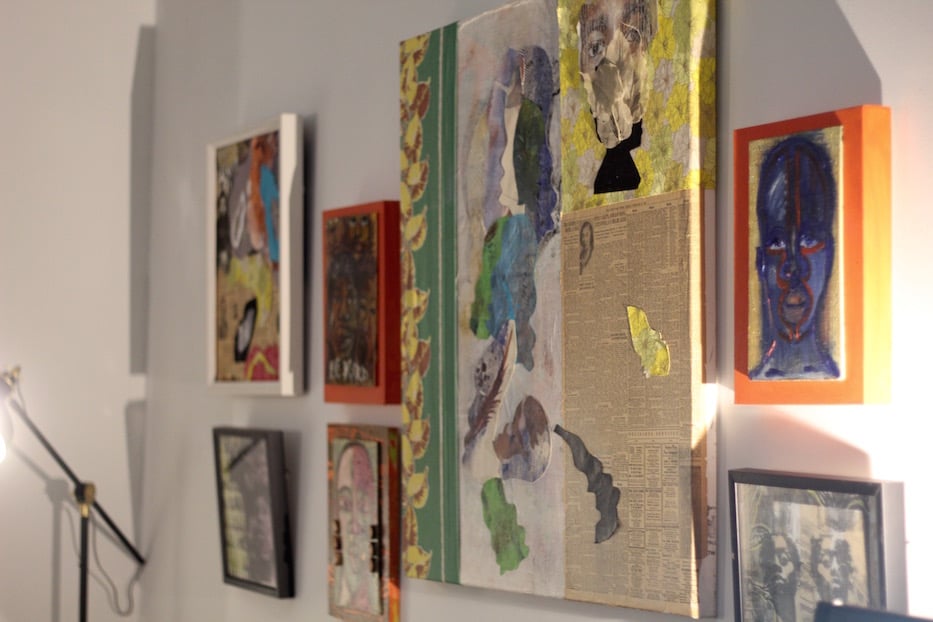 The works in the show tell that story piece by piece. In the collage Her Magic Was In Her Pen, Holloway gives the canvas a sense of movement while celebrating the work of Zora Neale Hurston, equal parts darling and architect of the Harlem Renaissance. On one side of the image, bright shapes float through a milky white and blueish ground. A leaf rises over a woman’s mouth, as yellow and white paint swirl in the background. In the lower righthand corner of the frame,  an article in faded newsprint celebrates Hurston’s career. The author’s stately portrait looks out in black and white like an invitation.

From far away, it looks as though the collage is a book, with a neat green spine patterned in climbing, technicolor leaves. On closer inspection, the floating shapes become rounded, monochrome faces, wispy feathers and large, abstracted droplets of color. Layers reveal themselves one at a time, some glinting in the room’s low lighting as others pop loudly from the canvas. It’s the kind of piece a viewer can return to again and again, each time with slightly new meaning. 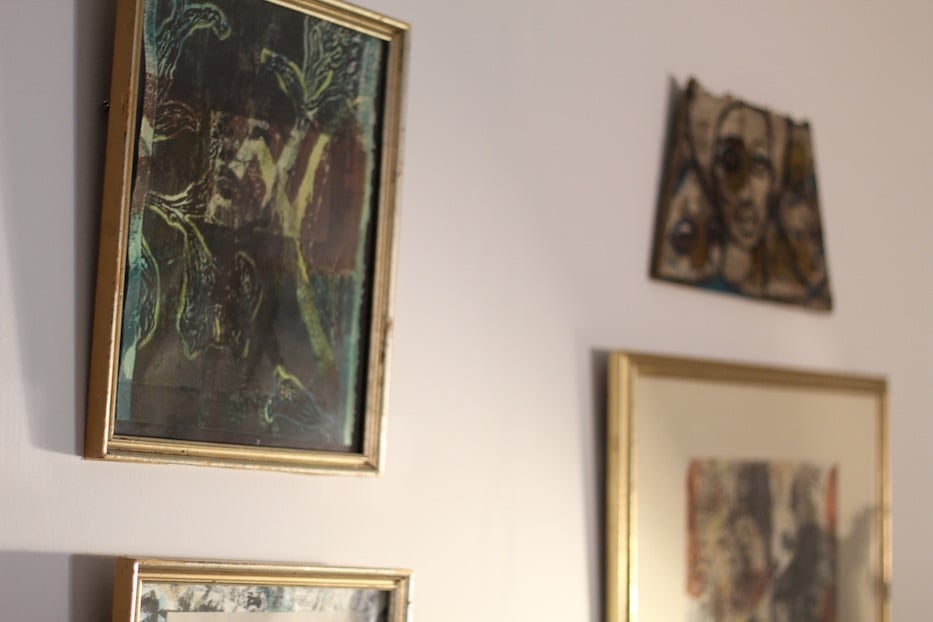 All works by Shaunda Holloway.

There's an equally rich sense of watching the artist's process morph and evolve. Among several oil on wood compositions, Holloway has included three of her monotypes, all done on the printing press at her Hamden home. Unlike printmaking processes in which artists pull multiples, monotypes are one of a kind—they produce only a single image. To make them, Holloway paints directly on a plate, then prints the mirror image directly on paper. What viewers are seeing in person doesn’t exist in a set of prints anywhere else.

To create textures, Holloway has used netting, lace, leaves, and fabric among other multimedia materials. The result is wonderfully unrestrained, with geometric patterns and vibrant, pulsating colors that rise from the paper. In one, she uses the technique to celebrate the natural world, with hand-rendered, veined flowers that emerge from a dark, depths-of-the-ocean blue and look as though they could be eyes or faces.

The bookstore’s quiet community room, dotted with tables and chairs and large enough for physical distancing, invites a kind of close looking that seems right on time for the show. Friday, Holloway buzzed around the room, chatting with friends, fellow printmakers, and a few pint-sized viewers who studied her work intently. Sugar, the bookstore’s dog, padded quietly around the space, stopping for quick hellos and a few cautious sniffs and nuzzles. 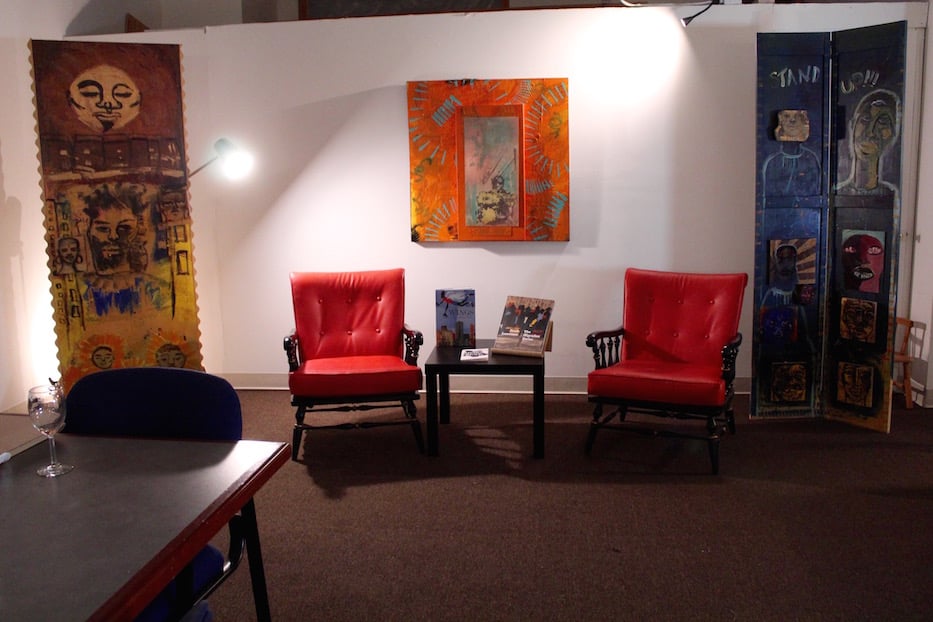 A sense of narrative carries over to her doors, which she has salvaged, propped up and painted with bright faces, beaming moons, and at least one abstracted cityscape. In Stand Up!!!, eight different faces look out at the viewer, their eyes wide and searching. Between them, Holloway plays with shape and color, some heads glowing as others balance squarely on their necks and shoulders. A viewer may feel nods to Jean-Michel Basquiat, William Kentridge, Martin Puryear and the West African carvers from whom Cubism was so rudely cribbed, but they are also entirely her own.

Across the wall, her painted Sonflowers looks out in vivid oranges, reds and yellows, folding human faces into the natural landscape. It’s effective and affecting, making the viewer wonder who among the flowers might still be with them, and who might exist beyond the veil. There’s a sense that both doors might lead somewhere in Holloway’s imagination, where a world without Covid-19, racism, and ableism is entirely possible. As if on cue, Christopher Meyer’s Wings and a guide to Jacob Lawrence’s Migration Series sits in between the two. 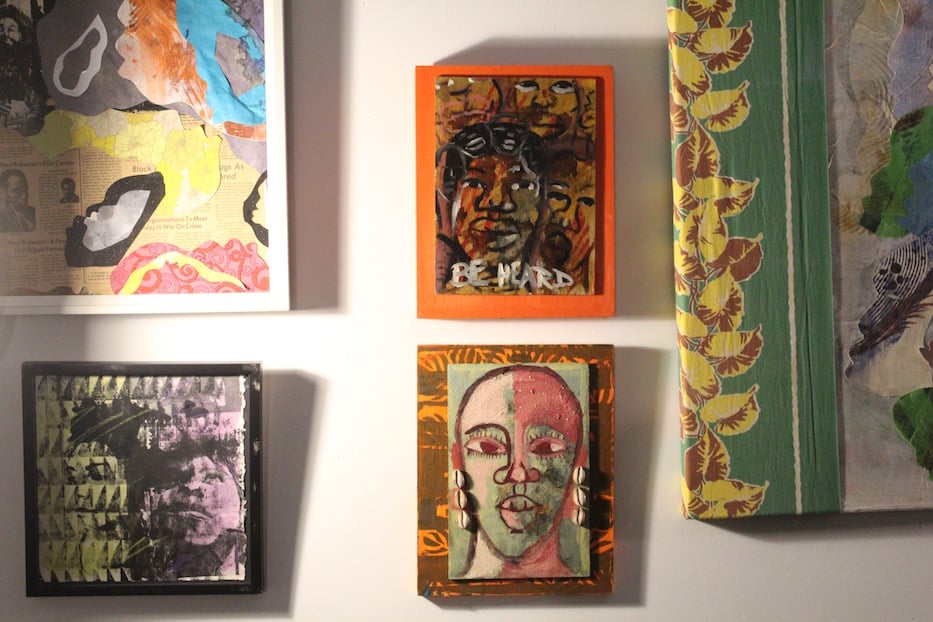 The works feel at home in the bookspace for a reason: Holloway has been a fan of co-owners Delores Williams and Lauren Anderson since the store's humble beginnings. An early supporter of People Get Ready, Holloway first loaned work to the bookstore in October 2019, before its opening on Indigenous People’s Day.

When the pandemic forced the bookstore to close its physical doors last March, those pieces "actually kept us company," Anderson said. The solo show expands that work.

"This space, it's a bookstore, but it's become a real community institution, and it's nice to be a part of that since the beginning," Holloway added. "They're so smart and so welcoming." 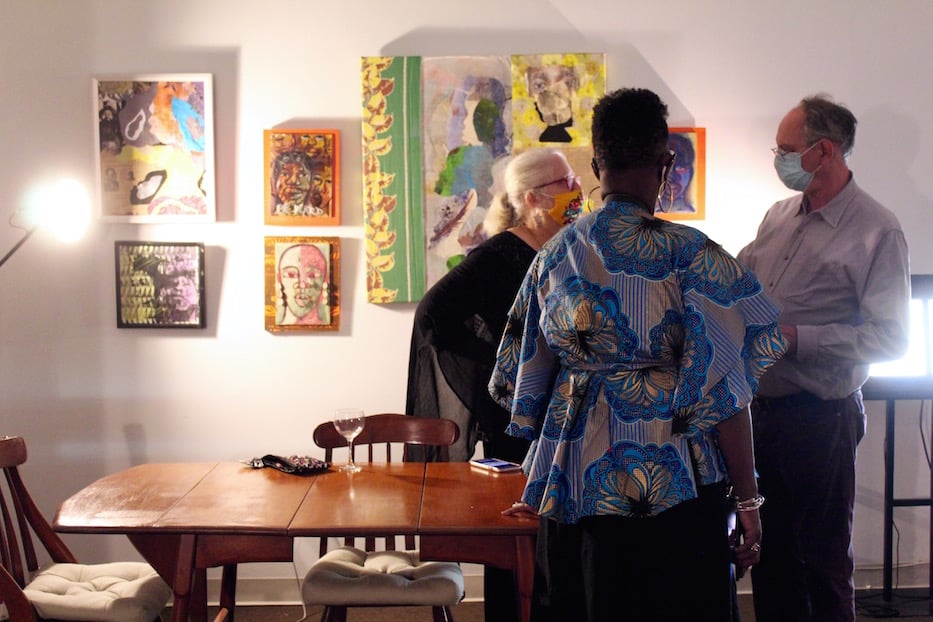 Between now and the end of October, Holloway said she is hopeful that the show will have a fair amount of foot traffic, including during Artspace New Haven’s Open Source Festival this fall. To her, this fall feels like New Haven is coming back, even in the face of an ongoing pandemic.  She sees the city returning as institutions reopen and students return to campus. For the first time this year, she is also teaching printmaking at Creative Arts Workshop. Find out more about her class, "Inspired Collagraph and Monotype Quilts," here.

"When the universities are in session, there's a collective intellectual buzz in New Haven that you can just feel,” she said. “That feeds me. There's a pulse and it's just something that ... it's like a current, you know? That intellectual energy translates into creative energy. These are the things that keep me going."

Strong Ones runs at People Get Ready Books, 119 Whalley Ave. in New Haven, through Oct. 31. Find out more Holloway at her website. Get the bookstore’s hours here.