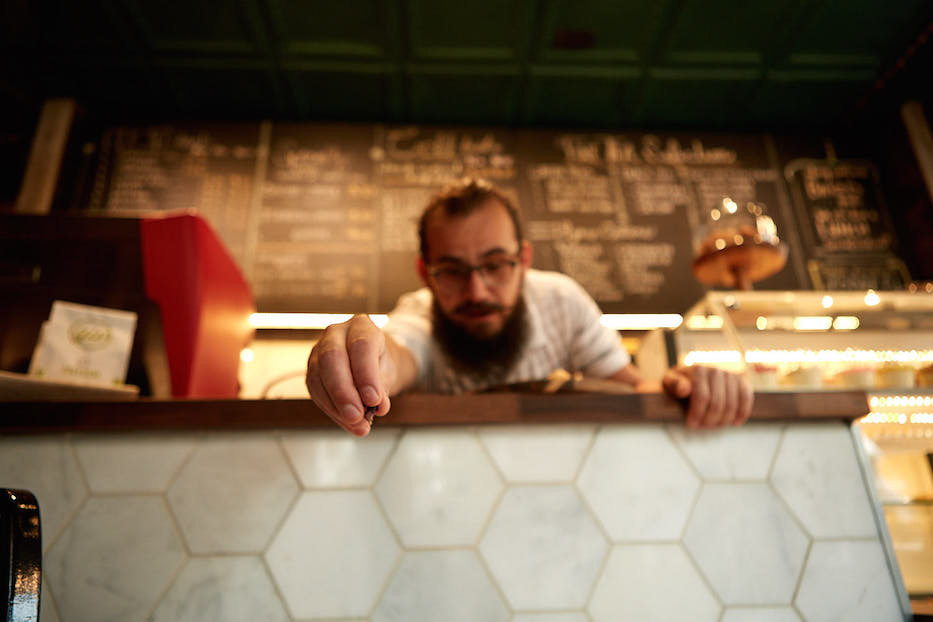 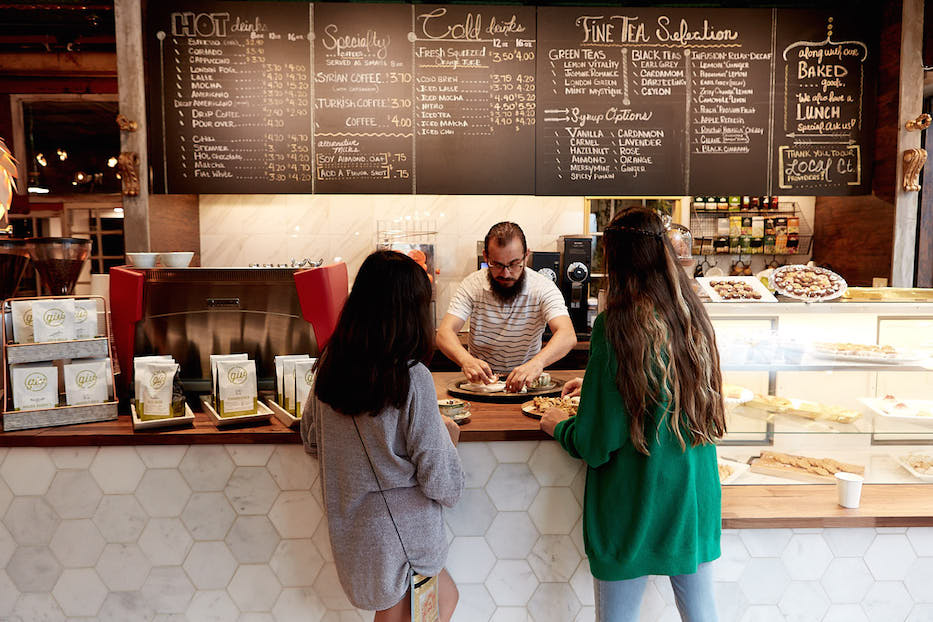 The counter is packed with sweets, each ready to tell a story. Syrup the color of sunlight sits atop chopped nuts, some crushed to the texture of fine, wet sand. Pastry, thin as parchment, wraps honeyed confections. The scent of rose rises from a round of nest-shaped cookies. A smooth cup of Syrian coffee comes across the counter, thick and steaming.

For the man tipping the espresso pot, every part of this is a pathway to home—and an invitation to seek it out among friends.

Welcome to Pistachio Cafe, the newest venture from artist and architect Mohamad Hafez. For the past five months, Hafez has been working with Luke and Mistina Hanscom of Lotta Studio to transform the space into a coffee shop that celebrates not only the Westville community, but also the storied cafes of Damascus before nine years of civil war tore the city apart.

The shop, which will be serving food from a number of local refugee and immigrant chefs, is poised to open at the end of the month. Hafez’s current partners include Canton-based Giv Coffee, Derby’s Damask Dessert Shop, The Farmer’s Cow milk, Holy Kakow, and New Haven’s own Sanctuary Kitchen.

“I think the whole place speaks to my need for hosting people, and having a big guest room that my house doesn't have,” he said in an interview Wednesday. “It’s focused on bringing people together. I've done that through artwork and my other skills, so I wanted to see if I could do that on an architectural scale.” 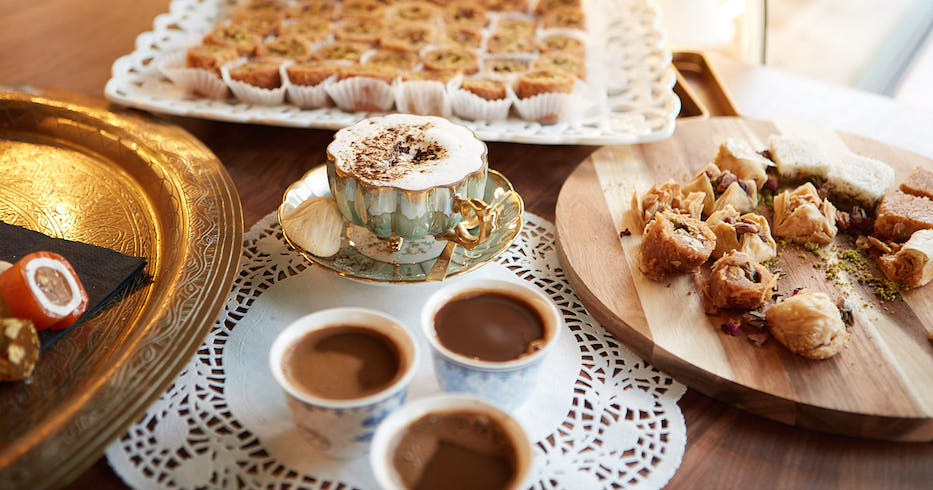 From the outside, Pistachio looks unassuming, another coffee shop at a corner that has been home to multiple coffee shops for the past five years. Through its heavy glass doors, Hafez has conjured something from a forgotten era: the tin ceiling is painted a rich blue-green, vivid enough to dive into. Chandeliers and lanterns hang overhead, casting a warm glow on the pastry cases and coffee machines. Flowers explode into bloom across the back wall, which leads to bathrooms covered in old newsprint.

A partition separates the cafe from Lotta Studio’s coworking space, panes of old glass fitted like crooked, still perfect teeth. Antique chairs and couches turn it into a nineteenth-century salon; their upholstery looks like it belongs in a museum, hidden away in the Napoleonic wing. Antique radios line the wall, ready to crackle to life with a broadcast from a pre-war Syria most Americans can’t remember or fathom.

Minimalism has no place here. Neither does kitsch. Magic and salon-style conversation, however, are both welcome. That’s part of the story.

While the work on Pistachio officially began in March, the idea for a cafe, gathering space, and homage to Syrian culture has been brewing in Hafez’s mind for much longer. For years, he has bridged artistry and architectural practice in his pieces, small-scale, intricately detailed renderings of home interiors and buildings destroyed by the Syrian Civil War. His series Unpacked: Refugee Baggage encases those works inside old suitcases, which open to reveal vignettes of everyday life, suddenly interrupted. Pistachio looks as if someone has walked into his work and turned back the clock, to a time when war was unimaginable. 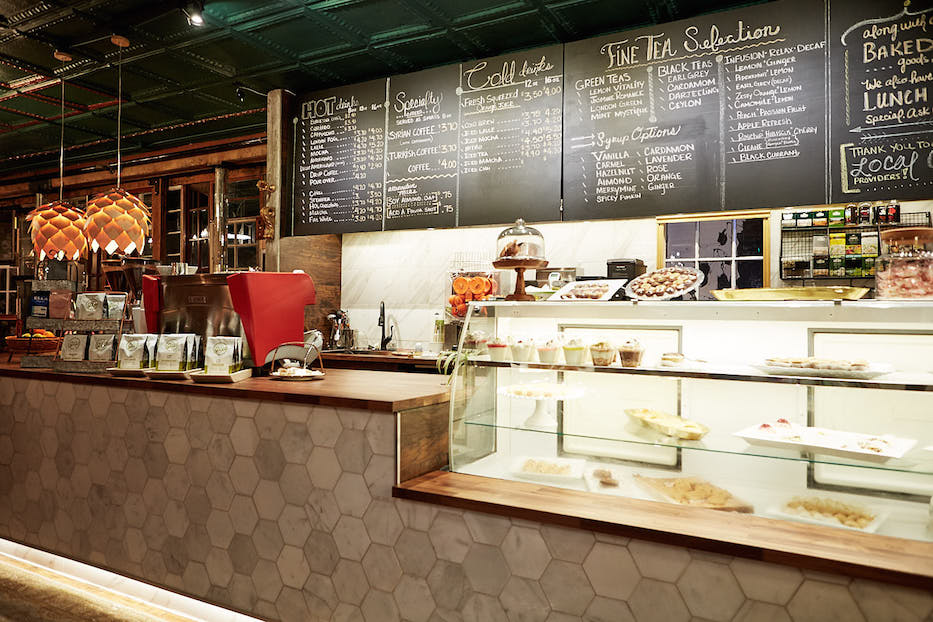 It is also a tribute to his love for sweets and coffee, the latter of which he has been making and drinking since he was 12 or 13. As a kid, Hafez was delighted by the very sight of baklava, eyes fixed on trays and cases of the nut-packed sweet as soon as he was tall enough to reach the counter. He also started drinking coffee young, as part of the rituals his family practiced around Ramadan. His mother was a big believer that strong coffee, with dates, apricots, and nuts, should be served after fasting. He is still working on serving dates with coffee as a nod to her.

When his family owned a coffee shop in Chicago, Hafez fell in love with the din of grinding beans and whirring espresso machines. Viewers who are lucky enough to get a tour of his studio—which is next door to the cafe at West River Arts—know that he keeps coffee cups, a rounded pot, and grounds in the corner of the space, beside a tin of cookies that is perennially half-full. The beans have been ground so finely that they are a silky brown powder, more like sifted cocoa than coffee.

But there never seemed to be enough space for his ideas to percolate in exactly the way he wanted them too. Until this year.

Last summer, Hafez left his job at the architecture firm Pickard Chilton, where he estimates that he was working 80 hours per week. The period marked a personal reawakening: it took him six months “to get out of that mindset and get a grip on life,” he said. He started to look more closely at the world around him. For the first time in over a decade, he recalled spending 15 minutes fixated on a single thing. In the winter, he took a two-month trip away from the United States, to visit extended family in Sweden, Saudia Arabia, and Dubai.

When he returned, he approached the Lotta Studio duo to talk about opening a coffee shop. The timing was right: Cafe X closed in November of last year. The Hanscoms had been in conversations with three or four other vendors. When Hafez suggested he was interested in the space—and knew what to do with it—they accepted his proposal. Hafez is family to them. It seemed right.

“It was a no brainer,” Mistina Hanscom said Wednesday, reached by phone. “I’ve missed having the public come in and out. He showed us his design ideas and he talked to us about needing more space. His vision was very much in line with ours—aesthetically, communicatively, a lot of sweat equity. We go into places and utilize our skills in a lot of different ways.”

The timing, she added, became a sort of unexpected gift. By the end of February, Luke Hanscom had lost almost all of his photography work in New York City. He and Mistina watched a fully scheduled spring season dry up overnight. On March 16, Gov. Ned Lamont ordered all nonessential businesses to close, meaning that they shut the doors on their coworking space. Five days later, they and Hafez began renovations on the cafe.

Together, the three got to work, pulling 18-hour shifts that began early in the morning, and went into the wee hours of the next one. Around 7 a.m., the Hanscoms would begin work on the space. Hafez, who described himself as a “night owl,” would roll in mid-morning and stay until 3 a.m. the next day. They’d overlap during part of the day, and essentially considered themselves a COVID-19 isolation pod. Or as Mistina called them, “instantly like quarantine buddies." 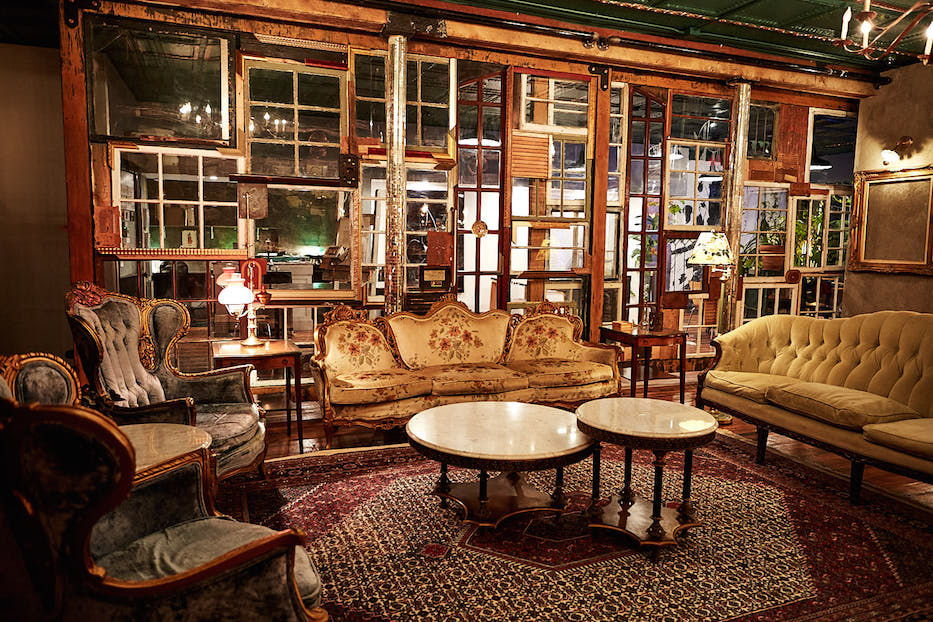 In the midst of it, Luke Hanscom worked with the Westville Village Renaissance Alliance (WVRA) Executive Director Elizabeth Donius to pull artists through the financial hole COVID-19 had left in their lives. When he wasn’t working on renovations, he was helping others navigate the alphabet soup of unemployment and federal aid, nearly impossible for contract or gig workers. Lotta, which is an LLC, secured a Paycheck Protection Program (PPP) loan that helped it survive.

They each had “different strengths,” Hafez added. While all three put in physical labor, Hafez navigated contracts and permits that have become a second language during his years in architecture. The renovation had not been without literal blood and sweat: he broke his ankle after falling from a ladder while hanging a light.

“There was a point when I would look around and it looked like my artwork from the war zones,” he said. “Really! There literally isn't a single nook between the coffee and the coworking space that hasn't been touched. The corporate world taught me that I couldn’t cut corners. That the standard was very, very high. Over 12 years, it was sort of beaten into my DNA.”

As the space came together, Hanscom said it helped all of them get through quarantine and COVID-19, the long shadow of which she is still staring down. This month marks their five-year anniversary in the space: the two signed their lease in August of 2015, and opened during City-Wide Open Studios that year. She recalled watching reactions to Pistachio last month, as Lotta cautiously reopened its coworking space. Now, the model operates on shifts of 10 people, who must be masked and social distancing while inside.

“I think that we could all use a little bit of glimmer right now,” she said. “I love watching their reactions when they see the beauty, and the time, and the investment. For me, as a creative, I haven't felt creative throughout this whole thing. My brain has flipped into survival mode. It just seems like I'm doing busywork.

“I'm feeling a little bit of a relief to be socially distant around other people, understanding that we've all been through this traumatic thing and we're all going to come out on the other side.” 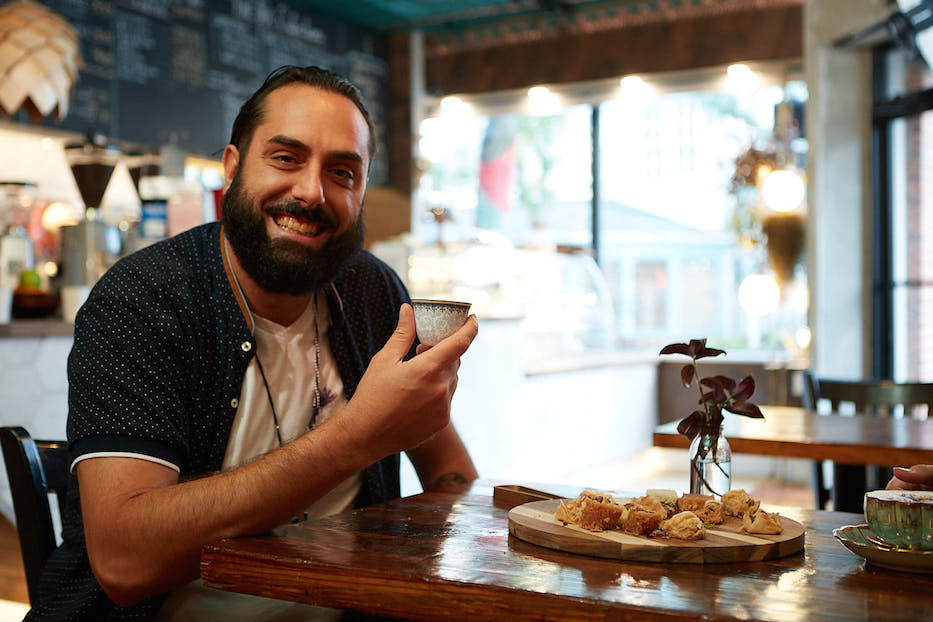 Now that it is done, Hafez hopes that it will be a space for conversation and cultural exchange.

The furniture, old radios, even the wallpaper in the bathrooms is meant to conjure French Baroque and English Victorian style, as well as bygone sitting rooms of Syria, Lebanon and Turkey that he still yearns for. The cafe lives at his own intersections: Arab, Syrian, practicing Muslim, brother to a refugee, artist, architect, American citizen.

“Hospitality and serving people is really embedded in our DNA,” he said. “Whether I'm serving coffee in my studio or I have a bigger appetite. This is an opportunity to serve folks at a bigger scale, and food is an amazing thing that brings people together. During these divided times that we're living in, I think it's prudent that folks break bread and share coffee or tea before delving into deeper subjects. And you never know who you'll meet here. This is a safe space. A sanctuary space.”

It is also bittersweet, he added. Pistachio is an homage to both his New Haven home—his chosen family—and a home that doesn’t exist anymore. Hafez has created his family’s living room in the middle of Westville because there isn’t a living room in Damascus to go home to. The Midan neighborhood where he once saw "towers of baklava, mountains of baklava" is gone.

“It’s steeped in our nostalgia … what our life looked like before the war,” he said. “I miss that. I miss those conversations and hosting folks. That’s why I collected the antique furniture and old radios for years. I'm always living in an experience of nostalgia. Not where it puts you into a depression, but where it pushes you to be positive.”

“I'm very blessed to have this opportunity,” he later added. “My art taught me that kindness is contagious. That only came because art allows me the interaction with my audience. You want to reach out to folks outside your social sphere and hear what they have to say.”