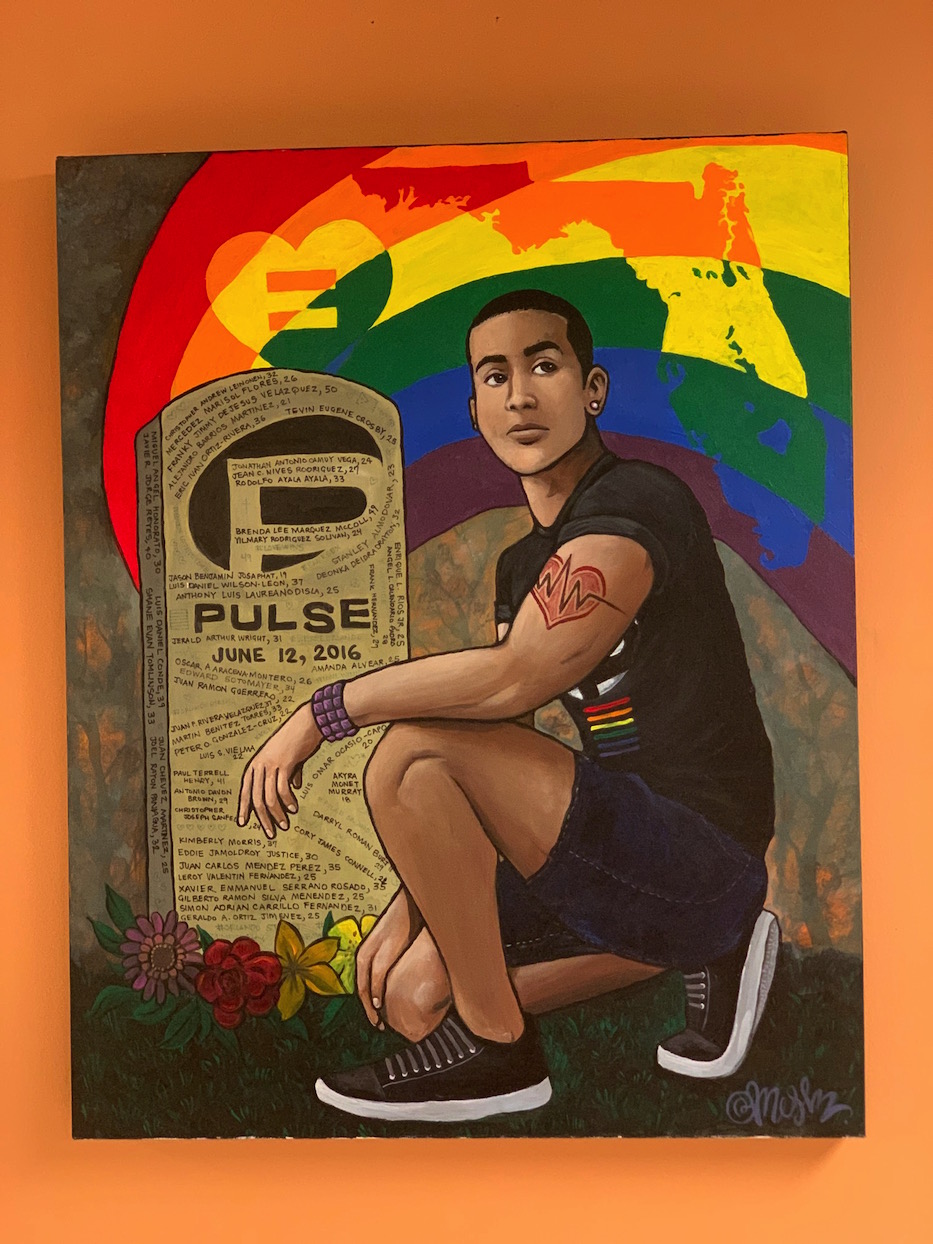 A man kneels as a shadowy figure with horns towers over him. Spanish words of despair and disapproval fill the shadowy figure’s body. You will always be my daughter. I did not raise you this way. You are not a boy, you are my daughter. In the middle of this figure is a cross. The man kneels with his eyes closed and sadness across his face.

Daniel Mena’s Untitled is part of ¡Queer y Que! (Queer and What!), running at the New Haven Pride Center through August 21. Earlier this month, the center held a virtual tour of the exhibition, an exploration of what it means be queer and Latinx from several area artists. The tour is available on the center's Facebook, YouTube and Twitter; it is also part of the center's Latinx programming.

The exhibition is co-curated by Patrick Dunn, executive director at the New Haven Pride Center, and Director of Case Management & Support Services Juancarlos Soto. In addition to holding the virtual opening online, center staff are also showing this exhibit in-person through reservation.

"This exhibition is part of the Center's investment in elevating the voices of the Queer Latinx community—a part of our community that is often silenced by and left out of mainstream queer culture,” Dunn said in an interview last week. “When we launched our Latinx programming in January, our goal was to build a space within the walls of the Center that is unapologetically queer and Latinx. This exhibit is about creating this type of space and exploring the many different stories Latinx queer people experience."

Throughout the show, artists present multiple lenses through which to view queerness. In another untitled work by Mena, the artist has shown a body upright, arms crossed over the chest. In the place of the head, flowers bloom in bright colors and a vine is wrapped around the figure’s neck. The flowers are vibrant and very large. A message appears on the side, written in a strong royal blue: There is bravery in being soft.

This piece of artwork knocks down the wall of understanding masculinity. For decades, people have displayed that to be masculine, one must be strong. This painting destroys those stereotypes. It shows that someone who identifies as a man can still be soft and caring.

Also on display are a number of digital prints by Soto and Jesus Abraham Morales Sánchez. Both artists participated in a 30-day quarantine art challenge; Soto completed 17 of the 30 days.

One piece of artwork by Morales Sánchez, titled Superhero, displays a Black woman in blue scrubs, a mask, and gloves physically fighting the coronavirus. It shows the power of healthcare workers, fighting every day to save millions of lives. There’s a sense from the artist that we have superheroes in our everyday lives. 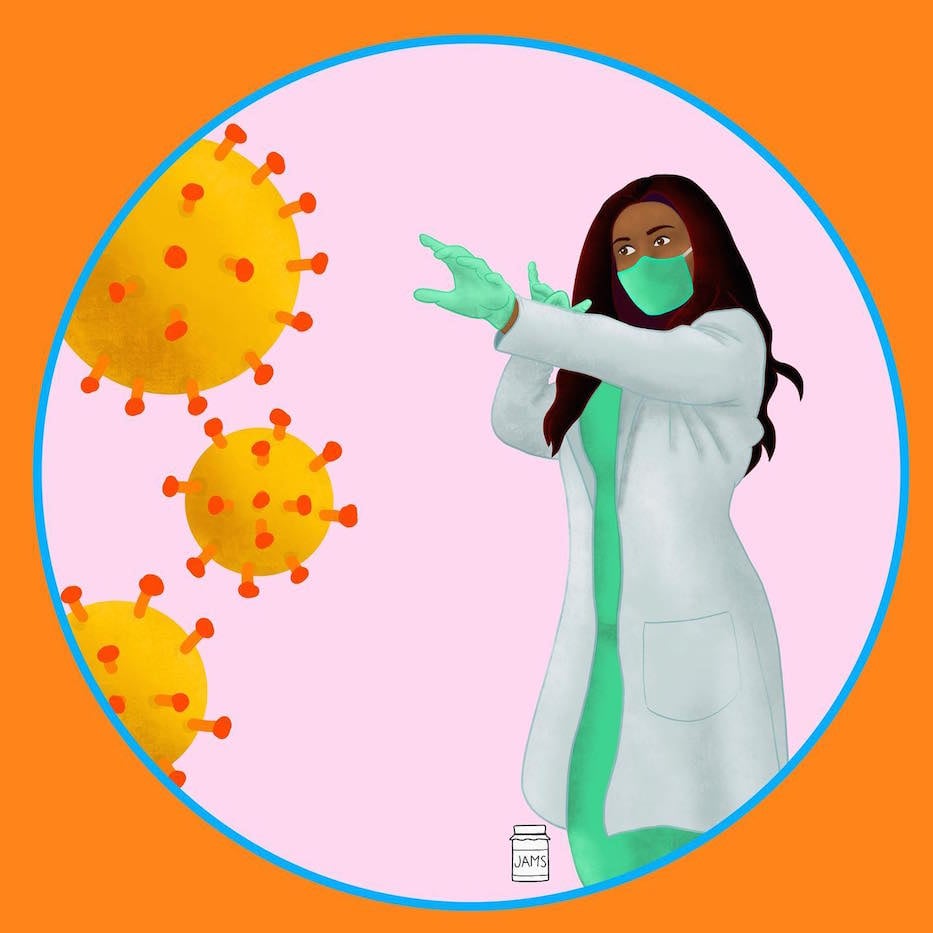 In Ricky Mestre’s Sinner, a man is displayed with the word “Sinner” written across his chest in red. Also on his body are two male gender symbols together, suggesting that he is gay. The two parallel bars of the equal sign sit on his arm, with a cross right above it. He is leaning against a stained-glass window, similar to the ones that are in most churches.

The painting is a reminder that in many Latinx families (and many families in general) being homosexual is viewed as a sin. For people in religious households to go against what they are taught their whole lives makes them outcasts. Last year, the Prison Policy Initiative (PPI) found that 40 percent of homeless youth identify as LGBTQ+, with higher numbers for Black and Latinx youth.

The words and symbols written in the red paint could come off as blood—as if the symbols are a part of this person and come from them. They are written and engraved on their body, as if the figure is marked with it.

In another work, Mestre’s #Pulsestrong, a Brown person kneels on the ground next to a tombstone. Written on the tombstone is the word Pulse, the name of the gay nightclub that witnessed the largest mass shooting in U.S. history on June 12, 2016. The attack, carried out by a single person with a semiautomatic weapon, left 49 people dead and another 53 people injured.

Small words are written on the tombstone—the names of the dead and their ages, most under 40 years old. The person has a tattoo of a heart with a pulse going through it to represent the club. They are shown wearing a black shirt with a rainbow going across the front. A rainbow also comes up from behind the tombstone. Inside the rainbow, there is a heart with an equal sign in it and the shape of Florida.

This image shows the impact that the Pulse shooting left on the LGBTQ+ community; Mestre suggests that it must be represented so that it is never forgotten. The tombstone represents all the lives that were lost that night—and how a place that was a safe for the LGBTQ+ community was turned into a place people feared.