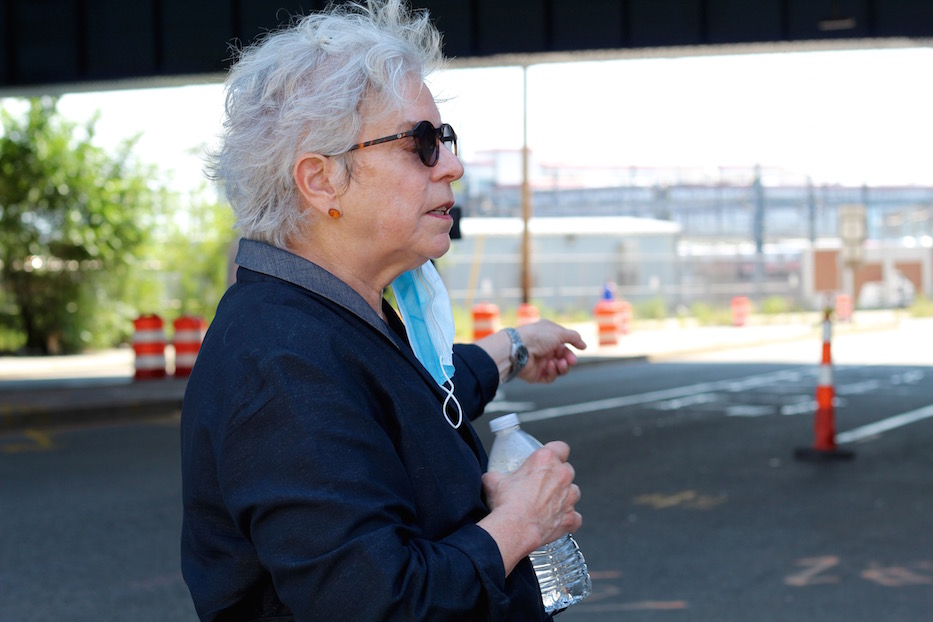 New Haven is extending its “welcome mat to the city” this year—and a long-awaited work of public art at its entrance is meant to light the way.

That update came from city employees, public art geeks, and elected officials Tuesday afternoon, during a press conference and walking tour to celebrate phase two of the Downtown Crossing Project. One by one, speakers shouted over the din of construction vehicles and glistened from the September heat as they praised the project, which is expected to be finished by July 2021.

“This is our new welcome mat to the city,” said Economic Development Administrator Michael Piscitelli. He praised the “the public art and beautification of the city associated with this project” as key goals of Downtown Crossing, which seeks to restitch Downtown and the Hill through new intersections and pedestrian-friendly connectors across the Route 34 highway-to-nowhere.

"All of this, in terms of the journey over a period of time, reclaims the city, creates an opportunity for so many, and speaks to the value of place in economic recovery," Piscitelli said. 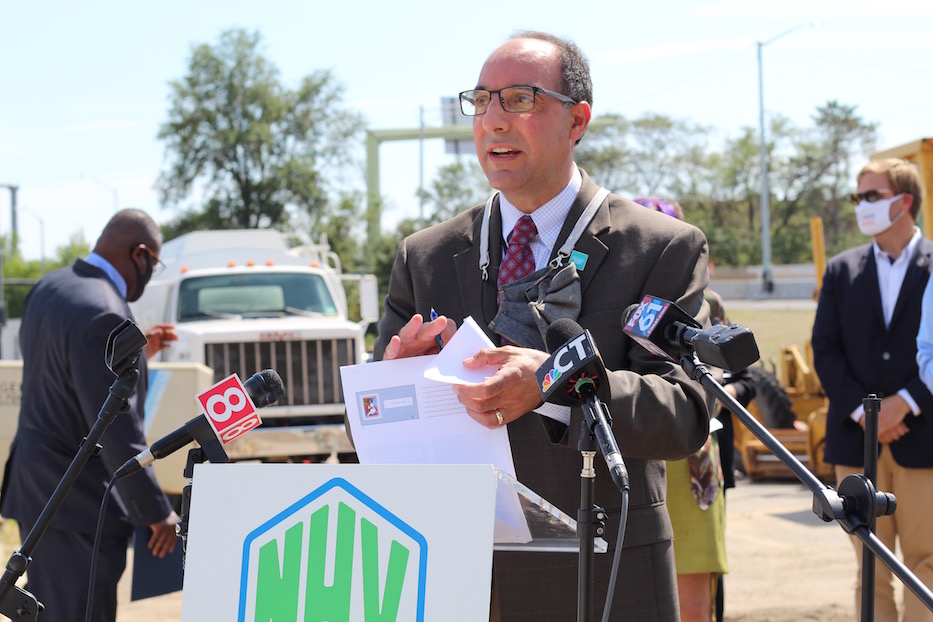 Click here and here to read more about the years-in-the-making, $50 million-plus Downtown Crossing project, and here to to read about the mid-20th century urban renewal highway construction that the project is seeking to undo.

The centerpiece of Downtown Crossing’s Phase 2 is a new pedestrian- and bicycle-protected intersection connecting Orange Street and South Orange Street. Tuesday, speakers from U.S. Rep. Rosa DeLaura to Gateway Community College President Thomas Coley praised it as key to a more economically vibrant downtown that is connected to the rest of the city.

The phase also includes Lighting Your Way, a permanent light installation from artist Sheila Levrant de Bretteville and Site Projects New Haven that has been in the works for at least five years. The installation is planned for the State Street overpass separating downtown from Union Station.

Tuesday’s press conference ended in a walk over to the site and brief remarks from Clarke, who has been a steadfast champion of the project for years. As dirt and gravel crunched under his feet, Mayor Justin Elicker joked with Clarke that the piece has indeed been a long time coming. Elicker himself has been involved in iterations of the Downtown Crossing project since his time on the Board of Alders, during which he served East Rock and Cedar Hill.

In 2015, Site Projects scored a $25,000 grant for the installation from the National Endowment for the Arts. Two years and stalled state approvals later, the organization's summer fellows performed music at the site, for a temporary sound-based installation to remind New Haveners that something was happening there. 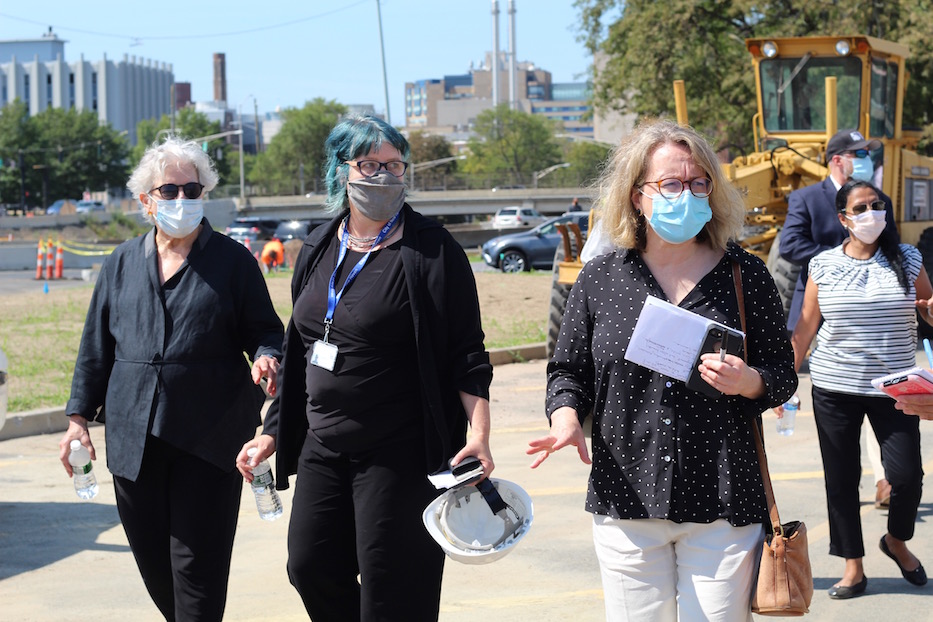 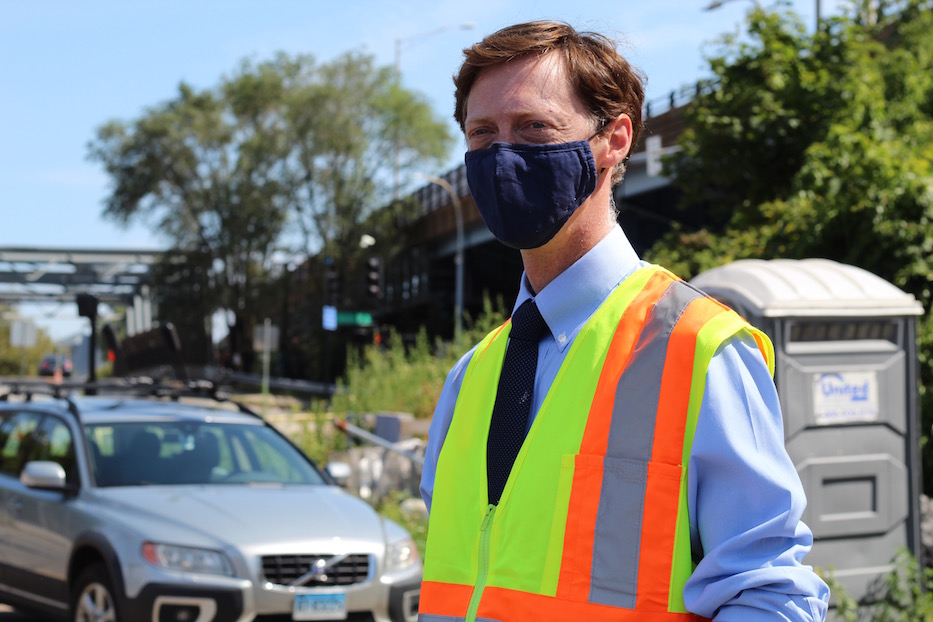 That year, Site Projects and the artist also explained that the City Plan Department was making steady progress on the approvals needed for the installation, which are integrated into the structure of the overpass. Now, it is expected to be finished by the end of this year.

“We’ll be creating a gateway to the city,” said Donna Hall, senior project planner with the City Plan Department. “This will be one of the premiere and primary gateways for traffic to get in and out of the city. Obviously, we are trying to achieve goals of economic development, of safety, of environmental sustainability.”

She said the City Plan Department is particularly proud of the elements of urban design included in the project. While Site Projects commissioned Lighting Your Way, City Plan has been working to get it over the finish line.

"We are trying to build not just a road, but this moment of civic pride that will build a constituency and [sense of] ownership for the people that live, study and work here,” Hall said.

Lighting Your Way is meant to breathe new life into the overpass, which stretches 90 feet across. Once-soaring beams are currently dingy, their blue paint turned a grey-green with age. The wing walls have been besieged by water damage. Columns on each side look like they need a bath. The whole structure is covered in fossilized bird droppings, some of which may date back to plans for urban renewal themselves.

De Bretteville’s design strips away some of those old layers. On the west side of the overpass—that’s the side that runs along shops on State Street and becomes police headquarters on Union Avenue—six spotlights will be installed on a high beam above an elongated sidewalk. They are motion activated, meant to put pedestrians in a pool of yellow light. 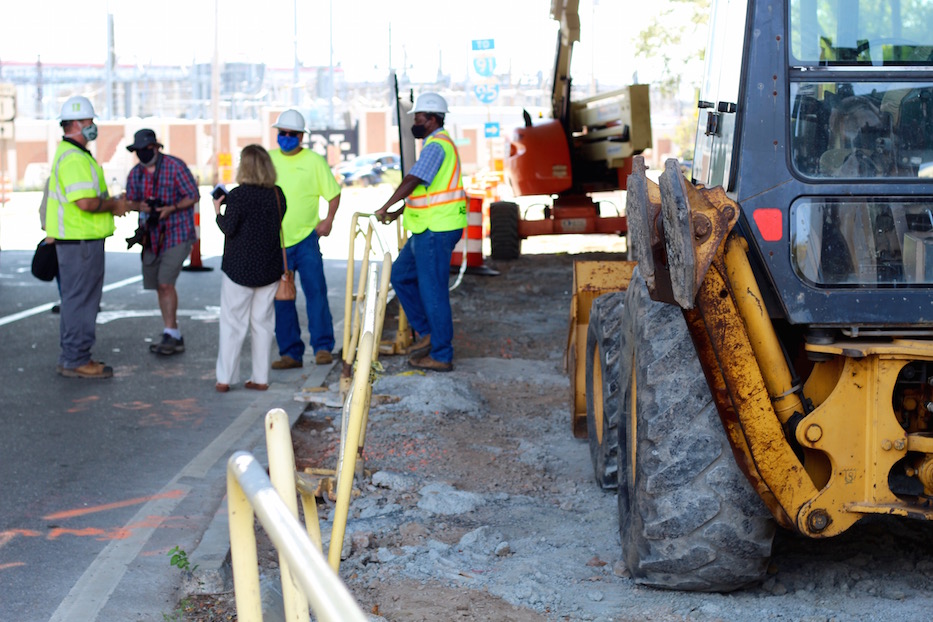 Before the installation can begin, Hall said engineers are putting a new “skin” onto the holding wall, which was cracking and stained with water damage. Both Hall and Clarke praised the “very progressive policies” of the state and federal funders behind the project, which allow public art.

“The City of New Haven has done something that is so remarkable and so praiseworthy in choosing this artist to do an art installation under this bridge,” Clarke said Tuesday. “When you walk in, you will be—I think—quite amazed at the power of how she has shaped what is going on under here … what she's done is so powerful and simple. It's not particularly high tech. It's very sculptural and very carefully done.”

She added that it may also serve to remind pedestrians, cyclists and drivers that there was a vibrant New Haven before urban renewal. In New Haven’s original nine squares, State Street met George Street at an angle. If a pedestrian followed the angle, it led directly to the water. Now, the water seems a whole far way away, separated by a network of bridges, sidewalks, and underpasses to Long Wharf and Sargent Drive.

“So this bridge, and this artwork, are so important in the history of New Haven for so many reasons,” she said. “We're so excited that it's happening. It shows incredible vision on the part of the City of New Haven.”

Robert Barrett, the lead engineer on the project with AECom, said it is rare for him to think about how a project may be enhancing the built environment around it. But on Lighting Your Way, it’s hard not to.

“My job is making sure the plan and specifications are being followed,” he said. “As far as any beautification we could do on any project, it gives us a sense of accomplishment. Anything that helps the community is a nice added bonus. Usually construction projects are more about functionality, and when you can incorporate beautification, it really makes us excited.”

The installation’s timing comes as Site Projects works toward a Ninth Square mural project by Uruguayan artist David de la Mano. Originally, de la Mano was scheduled to come to New Haven early in the summer for a large-scale mural commemorating the life and work of William Lanson, the free, Black architect who built New Haven’s Long Wharf and part of the Farmington Canal in the early nineteenth century. Then the project was pushed back to August due to COVID-19. Now, Clarke said, the organization is hoping that mid-October might work,if de la Mano is able to quarantine for two weeks before painting.

Site Projects has secured a wall—33 Crown Street, where Acme Furniture once bustled with activity—and has made the case that de la Mano’s work will increase both foot traffic and economic stimulus in the area. If the mural goes up, it will be just blocks from Lighting Your Way, connecting the neighborhoods with art that conjures both past and present history.