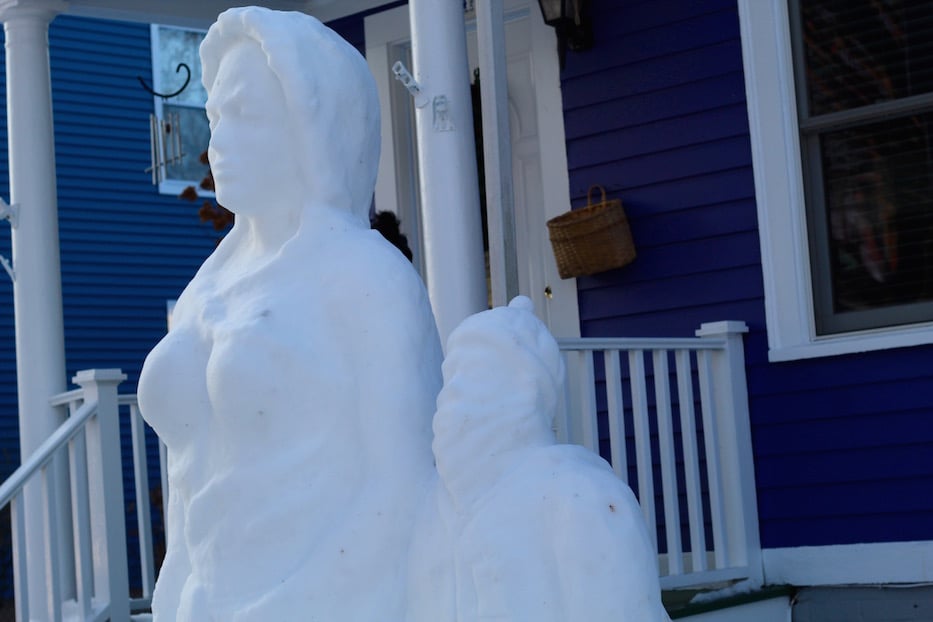 The two figures tower beside the purple house, their white sides slick and gleaming. The taller one looks out onto the street, her eyes blank but still protective. Her head is half-cloaked in a shroud that rolls down her neck and shoulders. Beside her, a child huddles in close, his mouth wrapped in a covering. On his head, a pom-pom bounces atop a knitted hat.

The sculpture comes from the artist Miguel Angel Mendoza, a New Haven transplant who is urging New Haveners to mask up and look out for their neighbors as COVID-19 cases continue to rise across the city and the state. Monday afternoon, he finished the sculpture between shifts at P&M Market. It sits in front of the Nicoll Street house where he lives in an apartment with his wife, Luisa, and their two teenage sons.

Viewers can see that if they come close. The larger figure almost looks regal—Mendoza said some passers-by have interpreted her as a Madonna, or a Persian queen. The younger figure wears a mask covering his mouth. Mendoza said he's been trying to spread that message to anyone who will listen, including New Haveners who still don't always get on board with mask wearing.

That empathetic tilt runs through his work. Born in Villa de Zaachila, Oaxaca, in 1967, Mendoza began painting when he was seven years old. As a child and then a young adult, he studied multiple forms of art, hanging onto a magical realism that still flows through his work. His exhibition Raíces sin Fronteras / Roots Without Borders opened that world to New Haveners at the New Haven Free Public Library earlier this year, shortly before the COVID-19 pandemic closed the building for several months.

In Oaxaca, he worked as a teacher, passing technique down to his students as he honed it himself. His paintings are populated with humans of various shapes, sizes and professions, a testament to his sheer affinity for people. But when he came to Connecticut 20 years ago—first to Bridgeport, and then to New Haven—he didn’t have as much time to paint.

For a while, he taught in ARTE, Inc.'s Saturday academy, but had to stop after it took too much time away from a job at P&M Market. Sometimes, he said, paintings take him months to finish between work and raising a family.

The snow, however, imposed a natural deadline. In a yard that looks out onto Nicoll Street, Mendoza began to sculpt the two figures even as temperatures started to rise. Luisa said that the sculpture hasn't just attracted kids and families from the neighborhood: one carload of people stopped on a road trip from South Carolina, after spotting it from down the street. 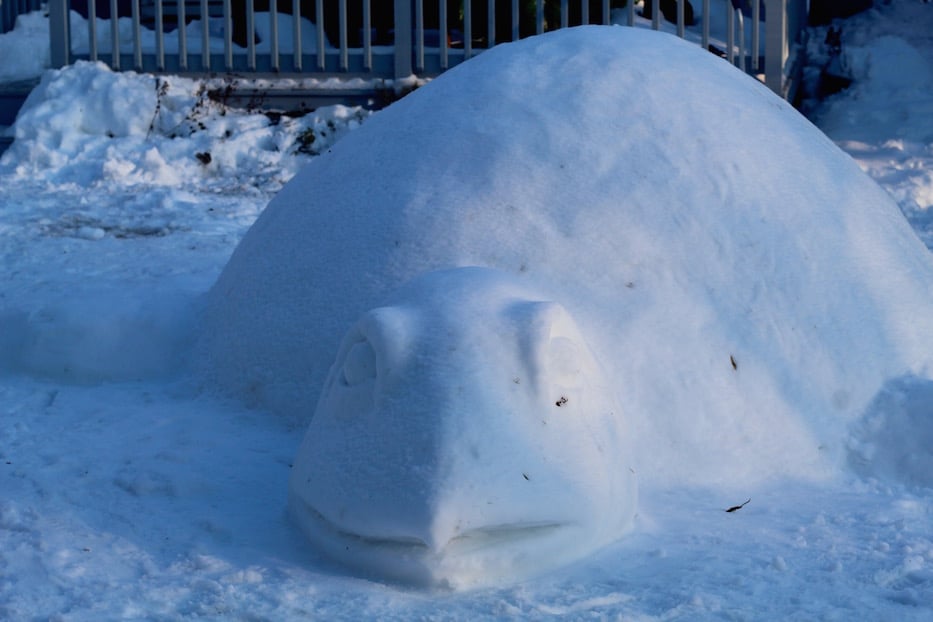 He has worked to create magic in a year that has not always felt magical. In the backyard, he sculpted a huge turtle with an open shell, working inside of it to carve out an igloo. Monday afternoon, Luisa studied the spaces where the animal had begun to slowly melt.

"I wish we could keep it here," she said almost mournfully.

While the sculptures may be ephemeral, he's hoping that their message is not. He wants New Haveners to follow public health guidelines, including masking up and standing at least six feet away from people outside their household, even if they live outdoors.

He said the pandemic has been especially hard for his family, which relocated to East Rock from the city's Hill neighborhood six months ago. Since March, his sons have been in remote school and unable to see most of their friends. While his hours have remained fairly steady, he said that work at a market during COVID-19 can feel chaotic.

He added that he's grateful his hours haven't been slashed, particularly as he's watched colleagues in the food and restaurant industry lose their jobs. When he's not there, he tries to focus on pandemic-safe activities with his family, including walks in East Rock Park and practicing guitar with his boys.

"It's meant to say, just to be responsible for whatever we are doing," he said. "This situation is really bad. Everybody’s got to think about it and be careful, not to do parties and stuff like that. You don’t have to go crazy. Nobody wants to die. Everybody wants to be safe."