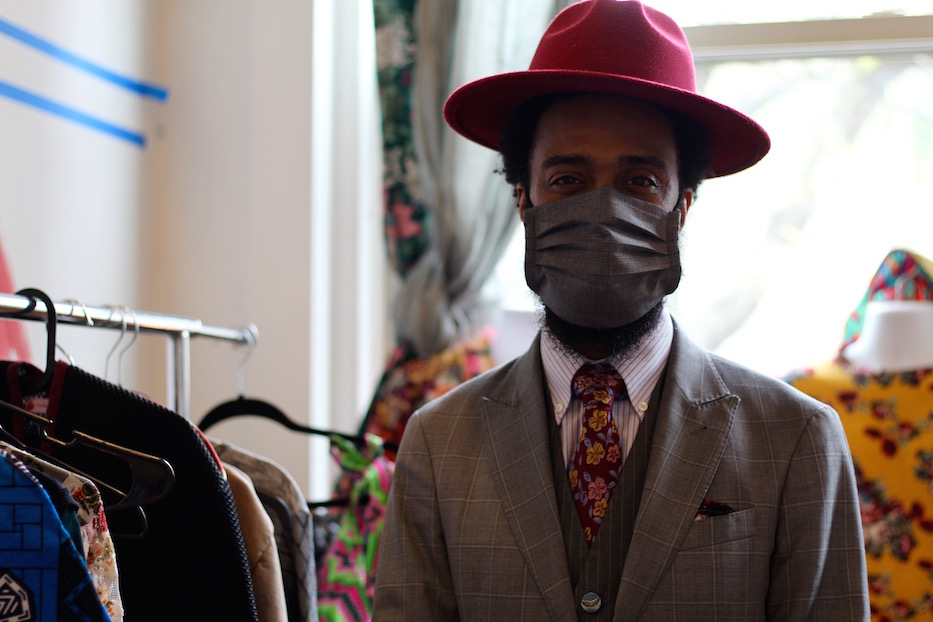 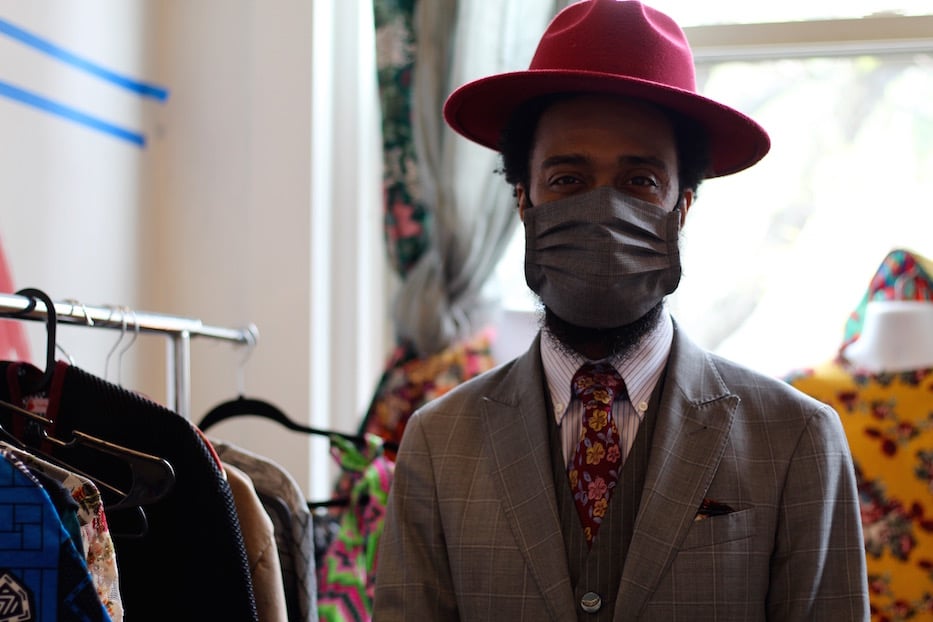 Montgomery in May 2019. Lucy Gellman Photo.

In Tea Montgomery's sunlit studio, a rack of floral patterns hangs brightly along one wall, asking visitors to come closer. There are checkered blues and silky pinks, tapered pants with blocks of color running down the sides. A single sewing machine sits on a table nearby, beside a stack of cleanly sewn caps and fitted masks.

The New Havener has spent decades thinking of how to give back to the community. Now he’s using art and fashion design as a way to get there.

Montgomery is the owner, founder and designer behind Threads By Tea, a clothing design studio that he operates out of the West River Arts building on Whalley Avenue. He started designing clothes in 2017 after discovering a passion for creating clothing and making wearable art.

“My mission has always been to save souls, to help people be their higher selves, being confident,” he said. “This is one of my ways of doing that. Giving that to people. Transferring that type of energy to them.”

Montgomery—whose nickname comes from teabags that infuse water the way he infuses the world around him—hasn’t always been interested in fashion. His parents are artists, and taught Montgomery to value and cultivate his craft. His father, a musical performer with a passion for poetry, taught Montgomery the art of flow in poems and music. As a child he had training in classical piano. As he got older, that grew into a band.

His interest in fashion took root when he became a student at New Haven’s James Hillhouse High School. It was there that he had the opportunity to shop for himself and develop his own sense of style. Montgomery and his friend Milton Brown would make suits and wear them to school.

“I've always been overall creative,” Montgomery said. “It’s naturally part of me, whether I want it to be or not.”

He grew his passion for fashion and design as a student at Berkeley College in California, where he studied marketing and received a graduate degree in entertainment business management. When he returned to New Haven to be closer to his family, he worked in retail at a clothing store. To supplement his income as an artist, he picked up a job as a manager at Jos A. Bank in New Haven. 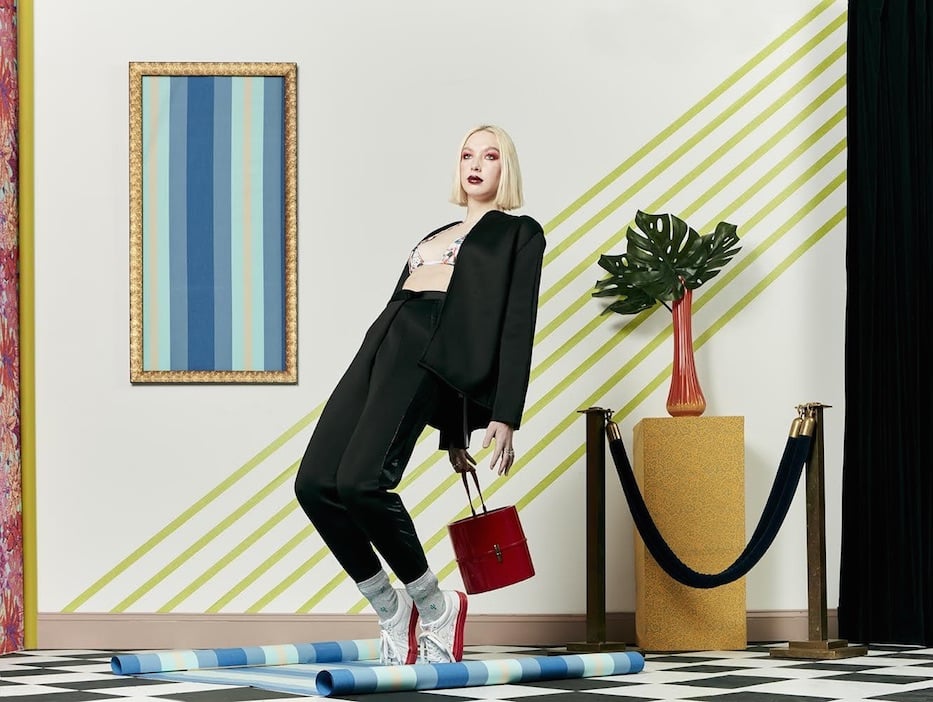 Three years ago, he started a fashion line after realizing that design helped him de-stress. His earliest studio was in his home. He grew it gradually, with collaborations that ranged from Lotta Studio to Studio Strata. With every piece, he said, he learned something new.

In 2019 he designed a piece called the “street tuxedo.” He describes it as a mix of streetwear and high fashion, which gives it the ability to be dressed up or down. It became a favorite piece of his because he was able to solidify a certain way on how he makes his pants.  The piece is cut and sewn from luxe neoprene material, originally made for Montgomery himself. He ultimately decided to sell it as a unisex piece.

When the pandemic hit last year, it “made me think to scale up and expand my business,” he said. He grew his online shop, which allows people to order without personal contact. He added small items, including fashionable masks. He advertises mostly through word of mouth and social media. He plans on growing his social media presence on platforms such as Instagram for more publicity. He has also moved into a new studio in the heart of Westville, which allows him to expand production.

Montgomery first got a sense of what it might be like to be a working artist in the Westville Village two years ago. In spring 2019, Lotta Studio Co-Owner Mistina Hanscom invited him to participate in a fashion show at the neighborhood’s annual ArtWalk celebration.

During ArtWalk, artists and businesses open their studios to the public, with various vendors and artistic programming over a three-day period. On one of the prep days, Hanscom gave Montgomery a tour of the West River Arts building, which is a coworking space for artists across media. He fell in love with the studio and the artists in the building and immediately got on the waiting list.

And wait he did—for two years. A spot opened up this year, allowing Montgomery to have his first studio space in the former haunt of artist Molly Gambardella. For the designer, it was worth the wait. He called his chance to move to the studio “a dream that actually came true.”

“New Haven is an excellent artistic hub,and an excellent entrepreneurial hub, and it’s home,” he said. “Starting from home makes the most sense.”

Now he’s focusing on growing his business with new products, including slides and hats that are quick for him to churn out. He said that making time for his own designs with commissions is a constant balancing act.

With each commission, he said, he has gotten a little better as a designer—but it also leaves less time for him to pursue his own design work. He said he is now utilizing his new space, grateful for every day he spends in the studio.

“You can do anything that you set your mind to,” he said. “It is absolutely okay to live in your power and explore what that is, the world is yours take what you need.”

Hadassah Marcano is a junior at Hill Regional Career High School. This piece comes to the Arts Paper through the Spring 2021 cohort of the Youth Arts Journalism Initiative (YAJI), a program of the Arts Council of Greater New Haven. This year, YAJI has gone virtual due to the COVID-19 pandemic. Read more about the program here or by checking out the "YAJI" tag.