The Opioid Crisis Hits The Stage 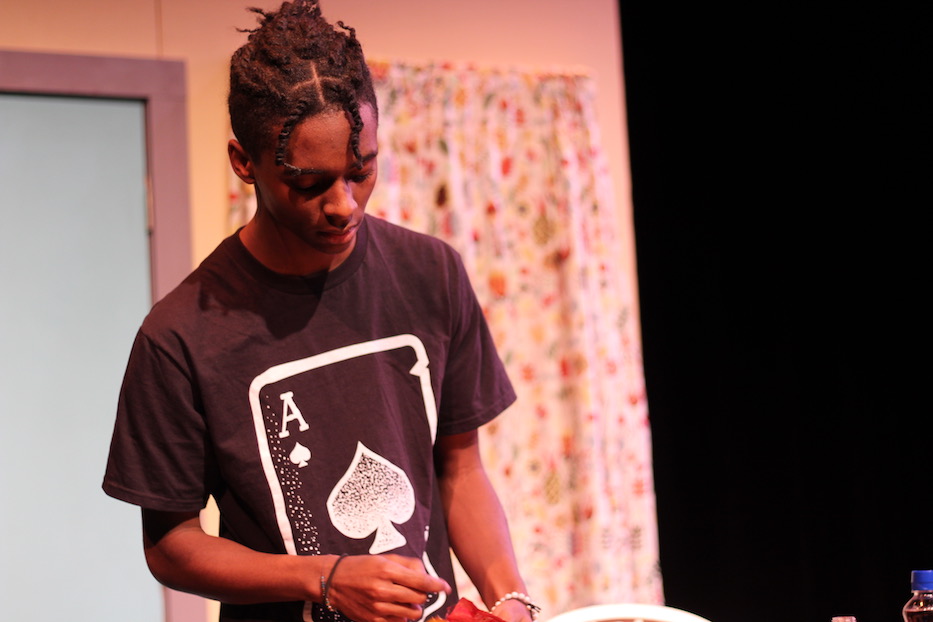 Lights up. Matthew and Spade are at the kitchen table, mixing drinks. The bottles stand at a haphazard stagger: maple syrup, coca-cola, a few plastic nips. There are packets of effervescent tablets waiting to unleash their giggly fizz. Sting’s Shape Of My Heart comes right from someone’s phone. Spade checks to make sure he’s got his protective eyewear, a pair of swim goggles.

Then Matthew’s mom bursts through the door. The terror and exhaustion in her eyes tell us everything we need to know.

So unfolds Matthew Rising, a new play, documentary, and public health project from writer and director Sharece Sellem, the South Central Network of Care and Clifford Beers Clinic. The work, which premiered Thursday to a packed house at Long Wharf Theatre, dives into the dark web and new forms of opioid addiction in the midst of an ongoing massive public health crisis.

“One of the best ways to shine a light on something is to do it literally, and have it on stage so you can see it,” said Sellem at Thursday’s performance. “I think this can be beneficial for providers, to see what it looks like on the inside of the home, and it’s helpful for people in the community. They can come to their own families and educate themselves.”

The work for Matthew Rising began several months ago, when Sellem attended a conference on the opioid epidemic in Bristol. At the time, she was already working with Clifford Beers in community engagement, and trying to find a way to bridge community outreach, education, storytelling, and theater. While she was at the conference, she attended a panel on the “dark web,” which has become a hard-to-track and harder-to-regulate player in the illicit sale of synthetic opioids.

Often, she learned, internet vendors put those opioids into chewable or hard candy form, selling them to youth and adults who can re-circulate them to their friends. Vendors don’t disclose what is in the candies—including doses of the highly addictive and highly deadly drug Fentanyl. Sellem, who had been doing work with those affected by the opioid crisis for years, felt like the ground had been taken from under her.

“That was scary to me,” she said Thursday. “That to me was like, wow. We need to get ahead of this.”

In Matthew Rising, she has found the right educational tool to do it—including a cast that comes from the New Haven community. As lights come up, the audience meets Matthew (Co-Op High School junior Juwan Lee) and his mother (Valerie Brookshire), a single mom who has been stretched in every direction society can stretch her. 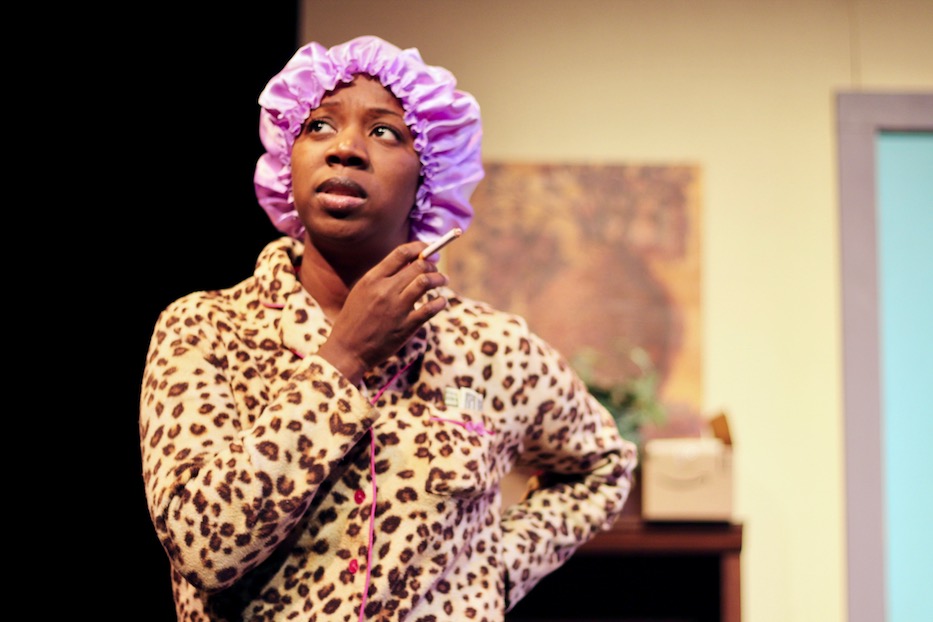 She has a part-time job that doesn’t pay nearly enough, a bus pass that is perennially running on empty, and a sick young son at home—which means that Matthew will need to stay back from school to babysit. She’s doing the best she can after the death of Matthew’s dad, whose loss to the opioid crisis strikes close to home.

There’s also his close friend Spade (Co-Op junior Donte Warren), whose drink mixing skills are outmatched only by his good grades. There’s Mr. Path (Clifford Beers staffer and musician Manny Sorrells), who checks in on Matthew at home and meets with him when he makes it to school. There’s the kooky and sweet neighbor Miss Angela (Clifford Beers CEO Alice Forrester), who turns Matthew on to business courses at the local library, but also has her own struggle with prescribed opiates.

As they step onto a set designed and painted by David Sepulveda, they are the students, neighbors, moms, educators, and friends who populate New Haven. Matthew may be haunted by his father’s death, but he is also whip-smart and sweet, with a love for Spade that speaks to the sheer power of male friendship. Miss Angela is a little heavy on the Marianne Williamson good energy, but she also has moments where her boomer ramblings speak straight up truth to power. Matthew’s mom may be at her limit—or well beyond it—but she wants to do right by her son, with a compassion for him that is palpable.

Together, they bust though the stigma of drug abuse, showing how a system can manipulate, misinform, and misdirect those suffering from pain in the service of profit. In 2001, pain was designated as the fifth vital sign, with new standards for pain measurement that doctors across the U.S. could use. Within ten years, prescription of opioids had soared. New, cheaper synthetic forms were finding their way onto the market. 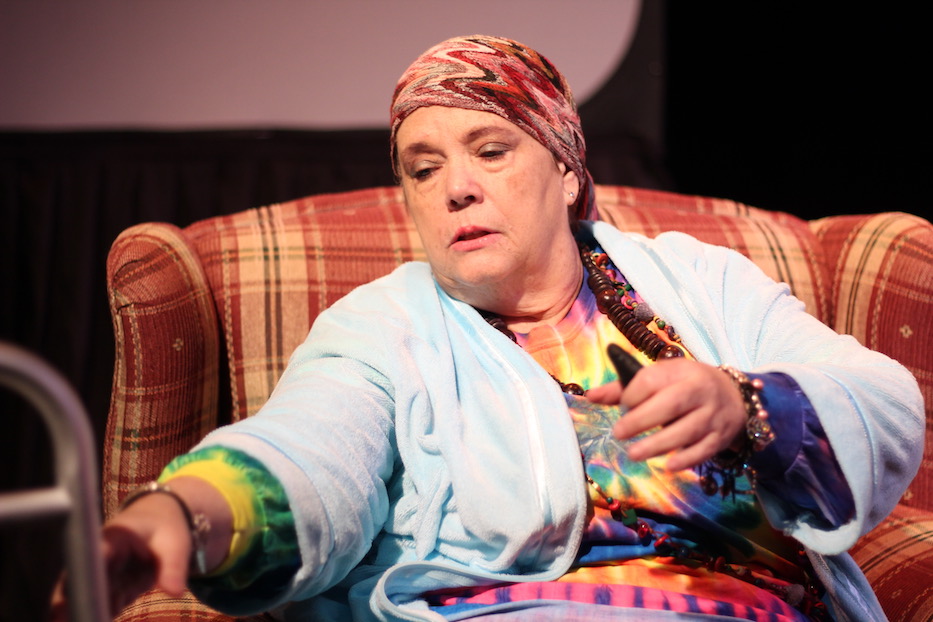 Purdue Pharma assured healthcare providers that the OxyContin it was manufacturing wasn’t addictive, while dedicating millions of dollars to marketing the product. Veterans were offered potent painkillers, but rarely got the mental health services to which they were ostensibly entitled by the federal government. Fentanyl, which was used as an intravenous anesthetic from the middle of the twentieth century through the 1990s, became part of pain treatment and then made its way onto the streets.

If Matthew Rising is a play about a country that doesn’t take care of its people as well as it takes care of its corporations, it’s told from a deeply human and sometimes visceral perspective. Sellem has a keen eye for detail, with nods to addiction that stretch beyond illicit opiates to Big Pharma, Big Tobacco, and Big Tech. It allows her to be nimble, showing how major drug epidemics feed into each other all driven by late-stage capitalism, economic exploitation, and institutional racism that is still very much alive and well.

When Spade asks of a Fentanyl-laced candy “so it’s not like crack,” it’s a flashback to the history of an epidemic that demonized people of color and offered prison time instead of rehabilitation or drug maintenance. When a dark web provider offers to send the boys a free sample, the audience may remember Purdue’s early patient coupon starter program, through which patients could get a free, weeklong or multi-week trial of the highly addictive drug OxyContin. 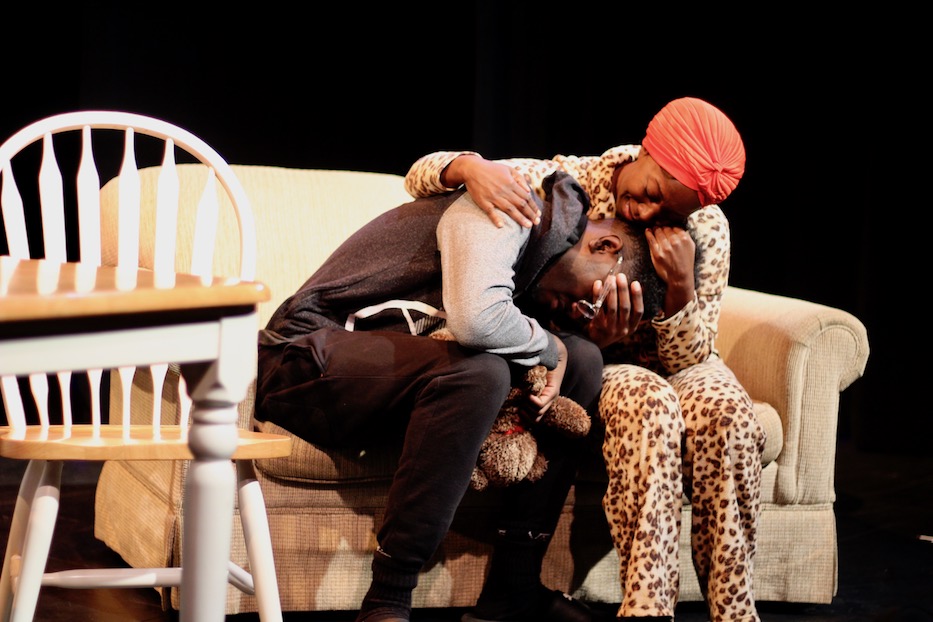 In a smart move, Sellem has used a large projector to show Matthew’s text exchanges with Spade, reminding her audiences that computer and smartphone technology has opened a whole other side of addiction. She has used Spade’s wardrobe—a series of t-shirts advertising Coca-Cola and playing cards that reference his name—as a proxy for gambling with one’s health and one’s life (so too with a series of votive candles). She never has to write the words into the script, because they’re right there out in front of the viewer.

And in what may be the show’s greatest strength, she reminds the audience that pain, which takes multiple forms, goes largely undiagnosed and equally untreated. The substances to which characters turn in the show are not products of their weakness or their recklessness, but evidence of a social infrastructure that has failed them. When Miss Angela proclaims that she takes prescribed meds because “when you’re in so much pain, you don’t even care anymore. You just want the pain to stop,” it feels like she’s speaking to every character in the show.

But Sellem also shows that the anecdote is joy, to which every character in the play is entitled and only some of them get. It is a powerful call to arms, a reminder to exercise care and compassion instead of blame. A collective urging, indeed, to hold institutions accountable rather than the people they have taken advantage of.

Going forward, Sellem said she hopes to bring performances to other schools, theaters, and workplaces in both the city and the state—ideally changing up the cast with people from those institutions. In a talkback after the performance, a panel of service providers urged the audience to bring the knowledge back to their communities and their networks of care.

“Please, think about your own biases and your own stigma-producing language, and how you react to a loved one … around substance use disorder,” said Carol Jones, a senior case manager at New London’s Alliance For Living. “We have to be able to put our ideas aside, our biases aside, our own thoughts. Learn. Be educated. These are folks with a disease. We have to support people and meet people where they are.”