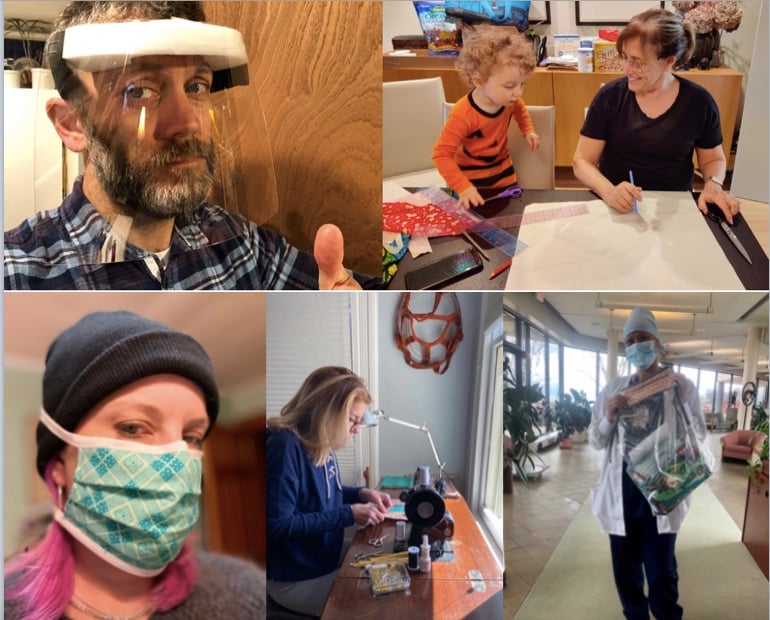 Thousands of face shields and cloth masks have begun to pour into Yale New Haven Hospital, Connecticut Hospice, and the state’s soup kitchens and retirement communities—not just from the state’s techies and makers, but also from its lifelong theater nerds.

A new infusion of personal protective equipment is coming from scene shop carpenters, costume designers, prop managers and drapery wizards in New Haven and across the state, as many find themselves suddenly without work. Amidst season cancellations, show postponements, and massive layoffs, they’ve turned to what they do best—making magic to save lives, one accoutrement at a time.

The efforts have been both individual and collective. In late March, the Yale School of Drama transformed its costume, scene, and prop shops into remote PPE hubs, through which employees have been churning out secondary masks and face shields from their homes.

The idea came out of a call between Yale New Haven Hospital and James Bundy, dean at the School of Drama and artistic director at the Yale Repertory Theatre. Unlike many theaters, which have been forced to furlough or lay off tens to hundreds of staff members, the School of Drama has not yet issued any layoffs. It is also the only theater in the region attached to a university with a $30 billion endowment.

In late March, the School of Drama purchased and distributed materials to artistic staff, who have been working from their homes since mid-March. In an email, Bundy called it the “most important and best news” that could be coming out of the theater, which has cancelled the remainder of its season and is estimating $500,000 in losses before the end of this year.

“I am so proud of our staff for helping to meet our community’s needs at such a critical moment,” he wrote.

In the scene shop—which is not really a single shop anymore—master carpenter Ryan Gardner and shop foreman Eric Sparks are leading some of those efforts. Last week, Sparks traveled to Yonkers to pick up the polycarbonate plastic and foam needed for face shields, which help protect medical personnel from the transmission of COVID-19.

Using a prototype from Johns Hopkins “with one to two modifications,” Gardner and colleagues have been working methodically to churn out 1,000 shields for YNHH. In a press conference Monday, YNHH hospital officials said there was an adequate supply of PPE, but that they are “watching it very closely.” On social media, a number of YNHH residents, physicians and personnel have already spoken out about the lack of adequate PPE.

“It's a really nice way to be able to contribute and to be at home,” Gardner said in a phone call Sunday. “My wife is a midwife at YNHH, and she's been on the labor floor. It's nice to know I'm trying to protect her as well.”

The face shields join hundreds of carefully sewn, fabric face masks that are coming out of the costume and design shops. A large number have already been delivered to Connecticut Hospice, which announced at the end of March that it would be taking non-COVID-19 patient overflow from hospitals that are overwhelmed. 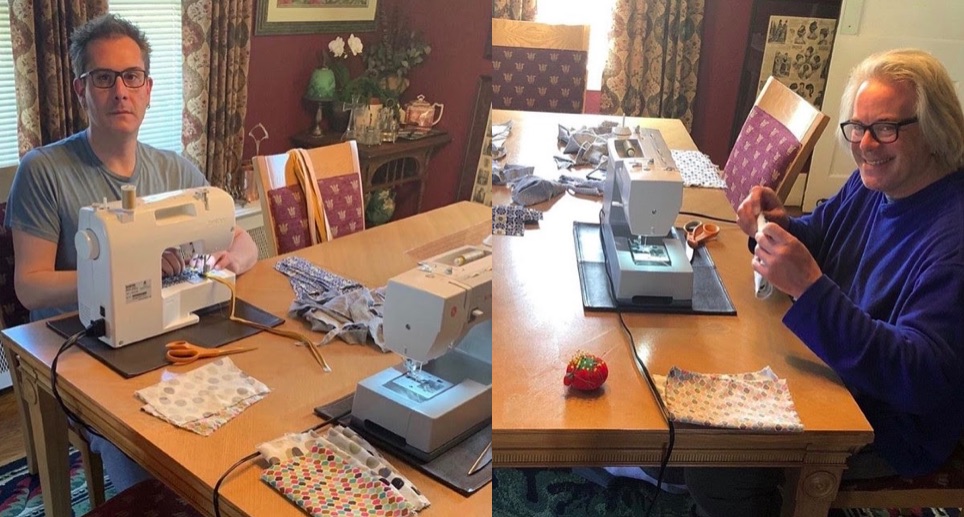 Elsewhere in the city and the state, artists have been using it to fill time that would otherwise be occupied by their shows. From Long Wharf Theatre, Props Manager Brian Fagan and Assistant Props Manager Frank Alberino have collectively made 118 face masks for Columbus House.

Brian Edward Crook, associate artistic director at Fairfield Center Stage, was planning to spend his March and April directing Wit, a Pulitzer Prize-winning drama about a professor confronting the realities of her own cancer diagnosis and death.

The cast and crew had held one tech rehearsal when the news of preemptive  COVID-19 closures began around the state. Crook (pictured below) recalled feeling increasingly nervous to have the cast in a single space. The theater postponed the show—it has since become part of a virtual reading program called "Fairfield Center Page"—and he started to wonder what the next casualties would be. Overnight, “a lot of my evening commitments just went out the window.” 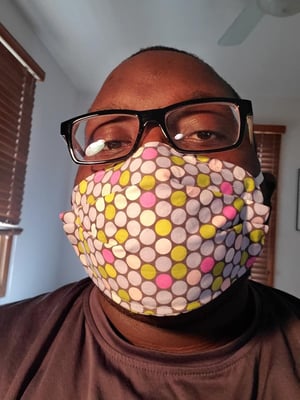 He was scrolling through Facebook when he saw an article about mask-maskers in Indiana, and noticed that a number of the contributors came out of the dramatic arts.

One call for masks led to another, and then to another. He read up on guidelines, pulled out his sewing machine, and began work on a prototype.

“In order to get past this and be able to return to some semblance of normalcy, we have to get involved,” he said. “I thought, I have a sewing machine. I know how to build and repair costumes. I had elastic lying around. We're gonna be in this longer if more of us don't pitch in and help. It's about the fact that people all over the world are legitimately suffering right now.”

Within a few days, he and theater colleague Lauren Linn had founded Facebook group Mask Makers Unite, several members of which are Connecticut crafters and theater artists who are out of work. Emily Chalk Battaglia, who is currently running the event planning business East of Elle out of her Stratford home, jumped onboard to help coordinate.

Battaglia got the word out over social media: she needed mask makers and she also needed supplies. She found out what institutions were looking for masks. In late March, she helped launch an accompanying website with safe drop off directions and links to how-to tutorials.

“People are not going to participate unless you tell them what to do,” she said. “ I may not be able to sew, but I can plan and I can organize.”

One of the members who has been particularly proficient is New Havener Liz Saylor, a costume, wig and makeup designer who has worked at the Ivoryton Playhouse since 2012, and in theater more broadly for 30 years.

In mid-March, the playhouse announced that it would be putting the rest of its season on hold and temporarily laying off staff across departments. Saylor started reading about mask-making efforts, and realized that she could stay busy if she had the supplies.

She reached out to Jacqueline Hubbard, artistic director at the Ivoryton Playhouse, and asked if she could source materials from the theater’s scene shop. It was an instant yes.

"Without the supplies, this would not be happening," she said of Hubbard's enthusiasm for the project.

She researched guidelines from the Centers for Disease Control and Prevention (CDC), which called for a three-pleat pattern. She praised MakeHaven Operations Manager Kate Cebik, who has been spearheading mask-making efforts with video tutorials and virtual sewing circles with other MakeHaven members and volunteers.

“It caught my eye that it was going to be needed,” she said. “I feel like I'm doing something and using a skill set. when you can use a skill set for something, it makes you feel that you're more invested.”

Since, Saylor has made dozens of masks, which have been put to instant use at the Downtown Evening Soup Kitchen (DESK). The organization was among her first recipients after she noticed that employees and volunteers were wearing bandannas to protect themselves.

While she's keeping herself busy, she said she misses her work. In addition to projects for the playhouse, she recently stepped on to help with costumes for James Hillhouse High School’s since-postponed production of The Wiz.

“The hardest part is that we're not doing the work we love,” she said. “We're so fortunate that we get paid for what we like. It's not just the loss of income. It's the loss of the creative outlet.”

Others have worked completely on their own, including following guidelines that all Americans should now be wearing masks or face coverings. Artist and illustrator Amie Ziner, who has worked as a pro-bono set designer for Collective Consciousness Theatre, has been churning out masks for friends and family members who may not have the skills to make their own.

“As soon as I heard that we were not going to work, I imagined what it was going to be like, a month out, with a totally inept federal response, and people thrown on their own resources” she wrote via Facebook messenger. “I got on Amazon and ordered supplies.”

Ziner ordered 25 yards of cotton muslin, which she’s already halfway through. She found thread, cotton twill, and needles. She jumped on her sewing machine, which has gotten her through the past four decades, and started stitching.

“This is a little thing I can do,” she said. “I have friends who have wonderful useful skills, but one of them isn't sewing. So I can help them out by doing this little thing for them.”

There are thousands of Connecticut dramatic and visual artists in this effort, and we know we've only gotten to a few. If you have a story to tell us, send us a photo with your homemade PPE and a few sentences. Narratives can be emailed to lucy@newhavenarts.org.