Three Kings Arrive In The Hill 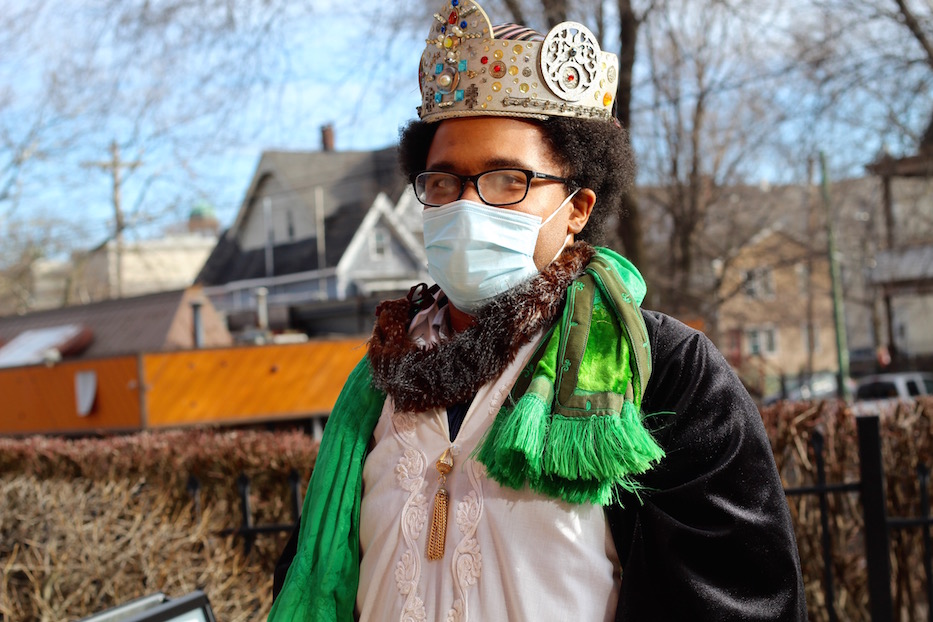 For 10 months, 12-year-old Carlos Muñoz has used the Wilson Branch Library as a lifeline to learn about his favorite superheroes. Wednesday, he arrived to find three librarians-turned-kings bearing dinosaur toys and stories of Thor and Beta Ray Bill.

Wednesday, Carlos was one of over 100 kids to attend an outdoor, masked, and socially distanced Three Kings Day/Día de Los Reyes celebration at the Wilson Branch of the New Haven Free Public Library (NHFPL). The branch, located just off Howard Avenue in The Hill, serves one of New Haven’s most racially diverse neighborhoods. As families queued up outside, strains of English, Spanish, and Pashto floated through the air.

“The idea was to expand curbside pickup,” said Luis Chavez-Brumell, who was recently promoted from Wilson Branch Manager to Deputy Director of the NHFPL. “This neighborhood has the highest poverty in the city. We knew that this Three Kings’ Day might be sadder than usual. And our job is to stay engaged in the community.”

Chavez-Brumell praised Library Technical Assistant Jeffrey Panettiere for pulling it together. Normally, the Wilson Branch holds a family-style celebration inside the library; last year it was a concert from musician and teaching artist Elba Llantin-Cruz. This year, library staff knew that gathering inside wasn’t an option. While the branch has reopened its technology resources on a limited basis, it is largely still limited to curbside pickup. 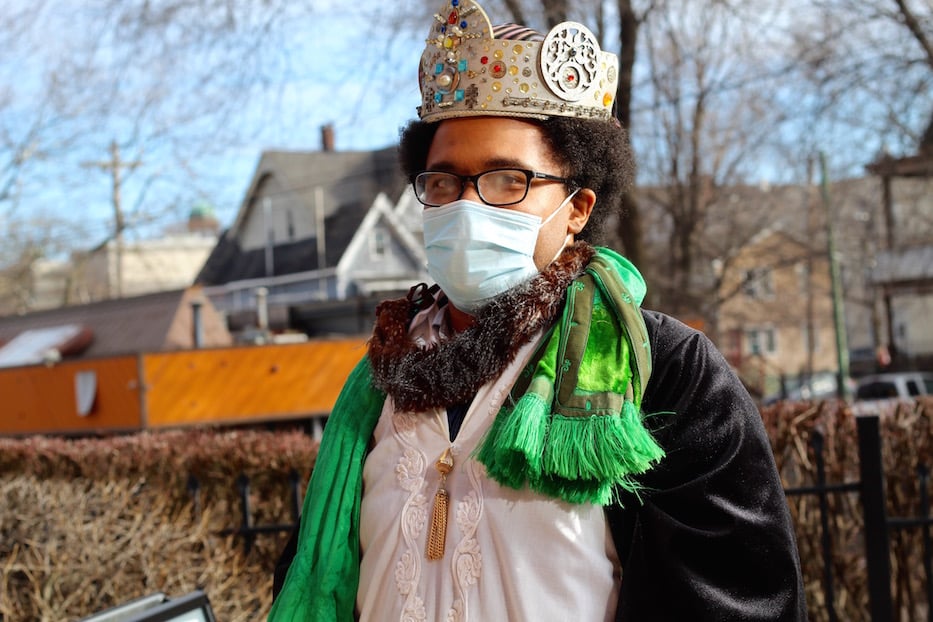 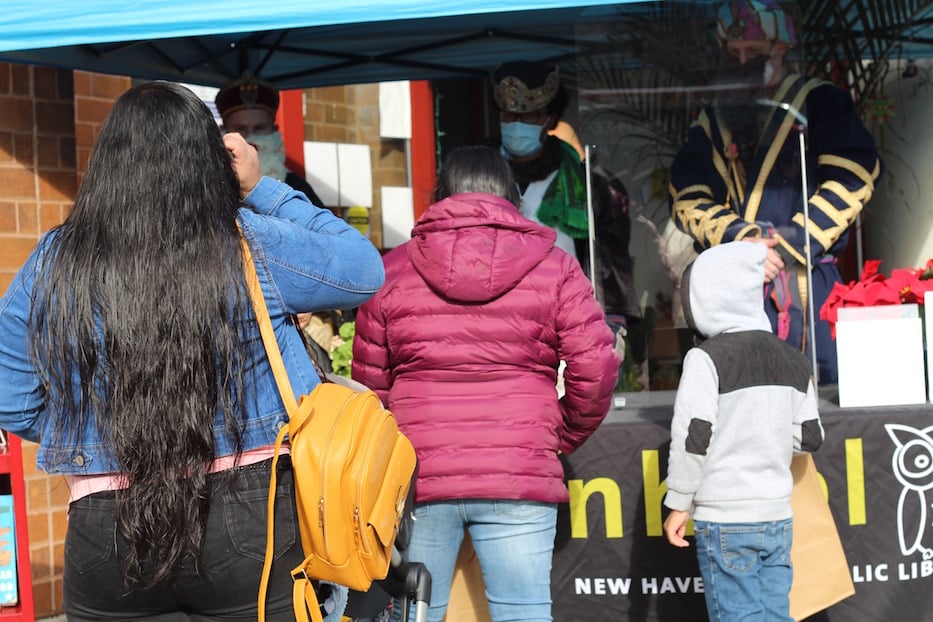 He added that the celebration felt fitting: the branch is located between Taquería Santa Ines and Roberto Clemente Leadership Academy. Many of the library’s patrons are Latinx and grew up celebrating Día de Los Reyes with their families.

Leading up to the event, staff assembled 200 gift bags with books and toys donated from the Yale Peabody Museum of Natural History. Librarian William Armstrong sourced long robes, bright fabric turbans, and jewel-encrusted crowns from Fashionista Vintage & Variety, which has a new home in the MarlinWorks Building. Panettiere, who grew up celebrating the Italian holiday La Befana on Jan. 6,  said that he wanted to keep the tradition and magic of the holiday alive.

“For me, it’s a special holiday,” he said. “And knowing the neighborhood, we need some joy right now.”

Wednesday afternoon, he attended to some of the library’s youngest patrons, debating the merits of Frozen 2 and Hotel Transylvania with 6-year-old Sherray Chambers. For months, Sherray has joined Panettiere outside the library to play with sidewalk chalk when she arrives with her mom, Sigourney. When she saw him in a beard (safety pinned to his mask, to maintain public health guidelines) and long, polka-dotted black robe, her eyes grew wide and her face lit up.

“I just can’t stop smiling,” she said from behind a pink-and-silver patterned mask. “They have fancy crowns and outfits. I really like the library. I get to read books. There’s movies that I can have. I like to play with chalk.”

Sigourney Chambers and her daughter, Sherray.

Sigourney Chambers added that the library has provided hours of entertainment to her daughter in the midst of an otherwise uncertain time. This year, the family wasn’t able to gather as usual for the holidays. With Sherray’s classes at Hill Central School currently online, access to books and educational resources from the library have helped her stay on track.

Carlos, a seventh grader at John C. Daniels School nearby, said the celebration helped him feel close to family members that he hasn’t seen in person for over a year. As a kid, he grew up celebrating Día de Los Reyes with his family, one side of which hails from Puebla, Mexico. This year, many of them remained thousands of miles and one international border away.

“Honestly, the best part of the holidays was spending time with family, but not so much right now,” he said. “With Covid, it’s been scary. Because it’s a new year, I’m trying to look at it from a different perspective.”

While he is stuck at home due to a pandemic, the library’s steady supply of graphic novels has helped transport him to faraway places—the Marvel universe is his favorite—and cities in dire need of saving. Last year, he was so inspired by Stan Lee's graphic novels that he started illustrating his own comic strip.

Wednesday, he said he was excited to make a trip to the library with his aunt, Aracely Muñoz. As the two spoke, a few pint-sized visitors picked up bags from a nearby desk and scurried away, smiling through their masks. Metropolitan Business Academy teacher Leslie Blatteau and her daughter, Francine, picked up a bag and explored its contents beside the library. Before the event, Blatteau used the event to talk to Francine about the holiday.

“It’s really nice to have this tradition here,” Muñoz said in Spanish, her nephew translating as she watched a steady flow of foot traffic. “For the kids to be inspired by something good.” 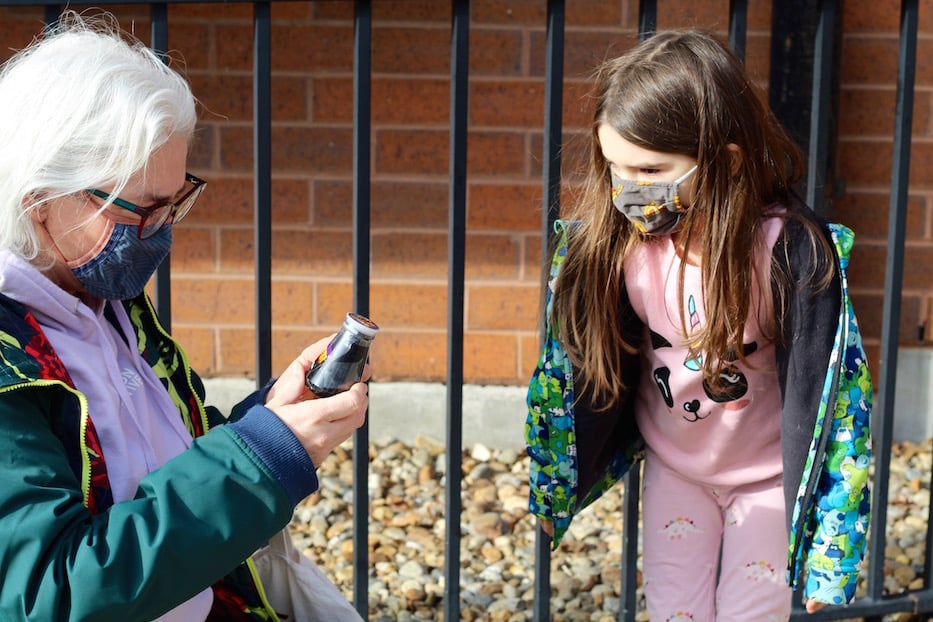 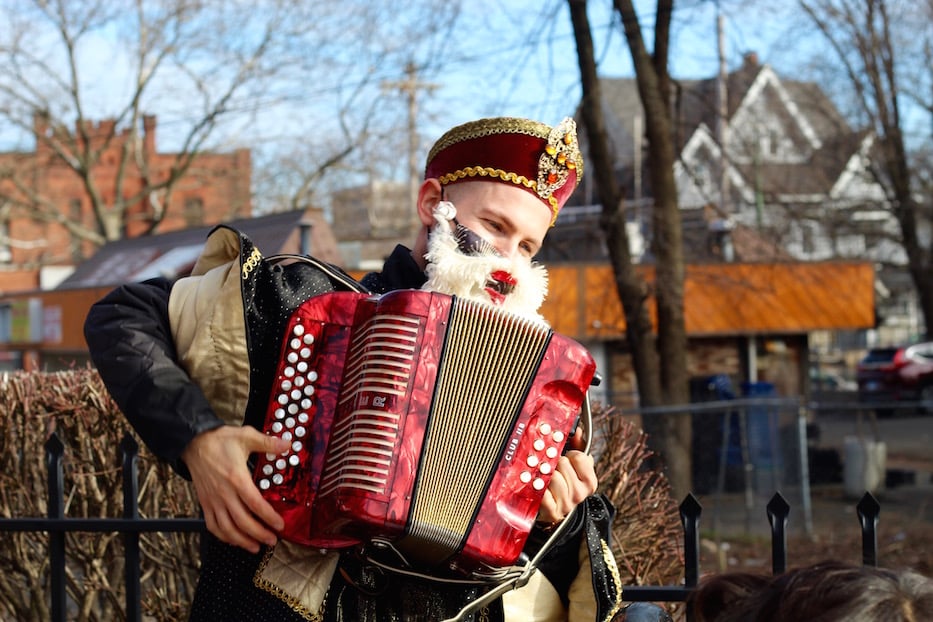 Nearby, New Haveners Joe Foran and Enedelia Cruz made their way up the library’s concrete ramp with their children Joseph, Eddie, and Itandehui Foran-Cruz. Each year, they celebrate Three Kings Day with gifts and at least one sweet, yeasted rosca de reyes made by one of Cruz’ friends. This year, both said the celebration was much quieter than they are used to. Wednesday morning, they brought out ukuleles to teach the boys Compay Segundo’s “Guantanamera.”

“For me, it’s special because it reminds me of Mexico,” Cruz said in Spanish, Foran translating as she spoke. “At home, it’s more insular. But we’re trying to create new traditions.”

One of those traditions seemed to unfold even as she spoke. For weeks, Panettiere has been talking to Cruz and  7-year-old Joseph about the accordion, which he has used in a few storytelling videos for the library. Wednesday, he pulled it out of its black case and began to play. The red panels on the instrument glinted in the sunlight. Using careful pumps of hand sanitizer, he handed it off and let Joseph try it on. 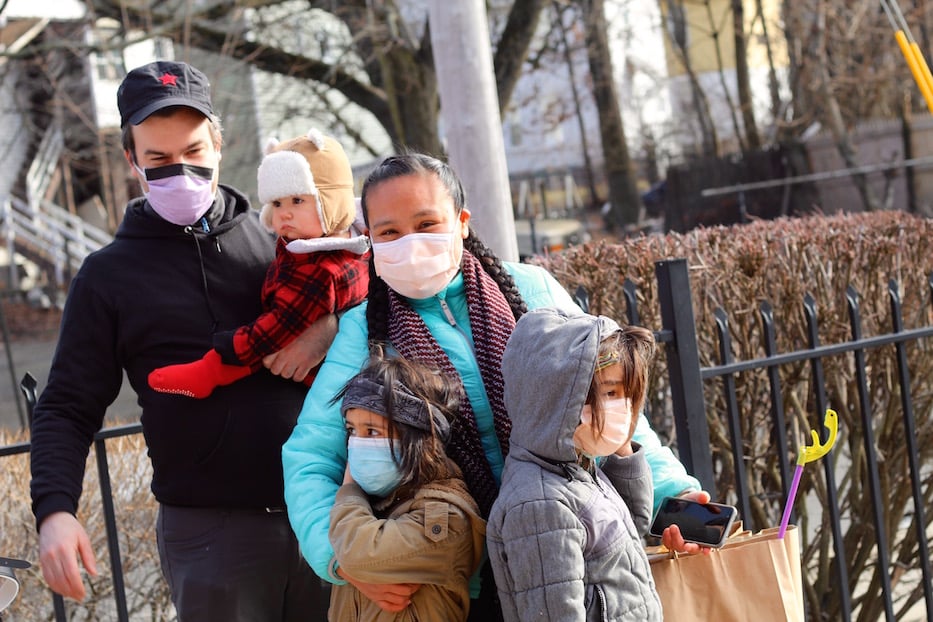 While the family recently moved from The Hill to East Rock, Foran said that the branch still feels like home. He has known Chavez-Brumell since their undergraduate days at the University of Connecticut, when they were both Latin American Studies majors.

Now, he works as a nurse in the Intensive Care Unit (ICU) at Yale New Haven Hospital. He said that being able to come to a COVID-safe, culturally responsive event at the library lifted his spirits—and his family’s.

“It’s a huge amount of trauma right, a huge amount of tragedy,” he said. “It means so much to me that they’re doing this in a socially responsible way. I’m traumatized. We go in. We do our work. We put our whole selves into it. It’s a daily trauma. It’s a grind. It’s almost like a private tragedy. And this—this celebrates and lifts our community.” 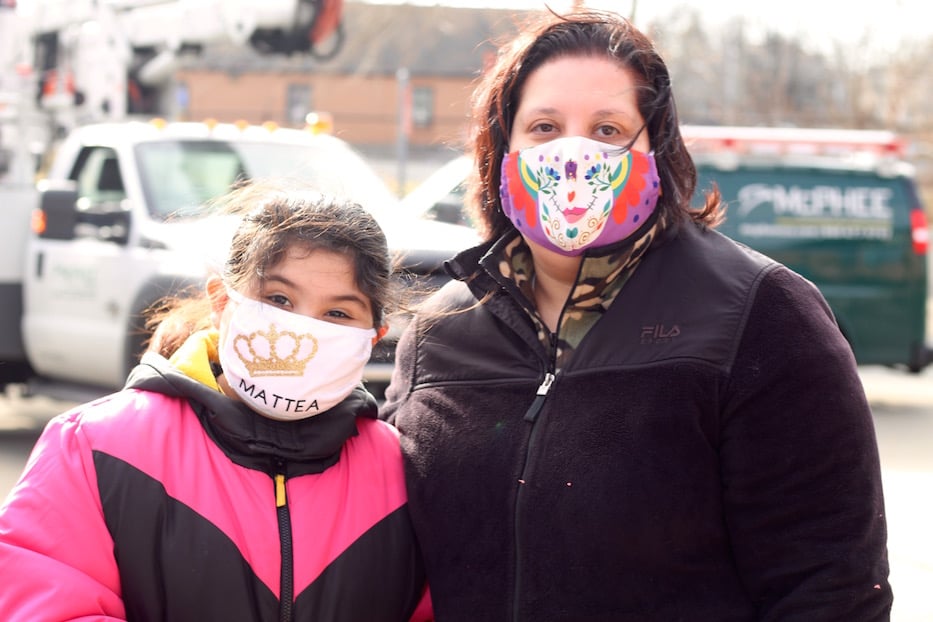 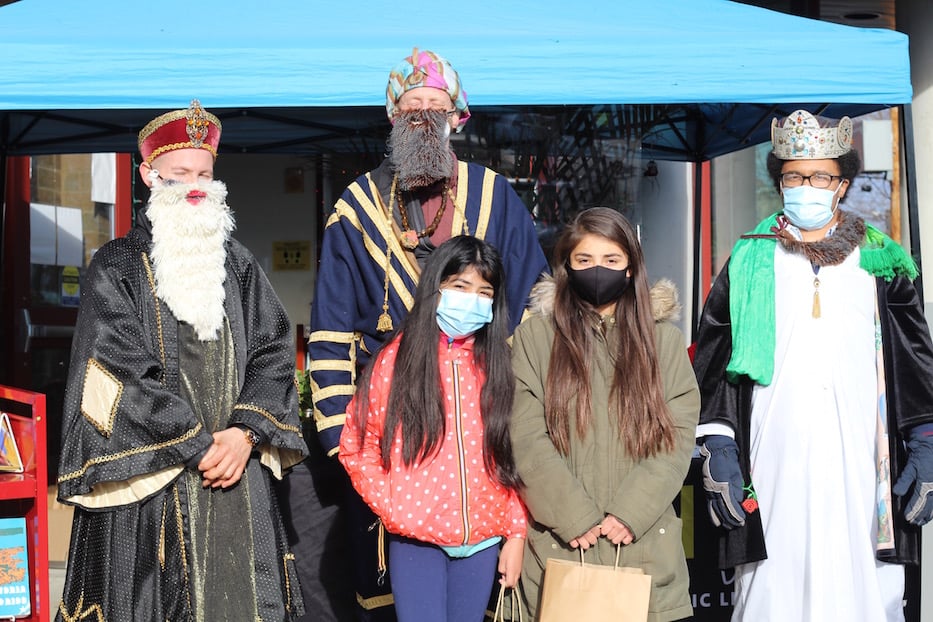 Top: Mattea Baez, a fourth grader at John S. Martinez School, and her mom Alejandra Miranda. Bottom: Jade and Ambar Santiago-Rojas with three bibliophilic kings. Miranda said that she and Mattea celebrate Three Kings Day at home and were excited to come to the library to pick up both books and toys.

His neighbor, Fatima Rojas, arrived with her two daughters just as he and Cruz headed out. While the family celebrates Día de Los Reyes each year, the three kings wrote earlier this week with the news that they would be delayed until Saturday due to the coronavirus pandemic. Her daughter Jade Santiago-Rojas, who is interested in cosplay, asked for costumes and squishy toys called mochi, after the Japanese rice dessert.

Her sister Ambar Santiago-Rojas, an eighth grader at ESUMS, said that celebrating makes her feel closer to her Mexican culture. This year, she asked the three kings for a blender (“it’s not just for me, it’s for the whole family,” she noted), an anatomy textbook in English and Spanish, and some clothes. She praised the library for holding a joyful event.

“A lot of parents can’t give their kids toys or presents this year,” she said.

The New Haven Free Public Library is now open for curbside pickup and limited technical/computer assistance. Find out more at its website.