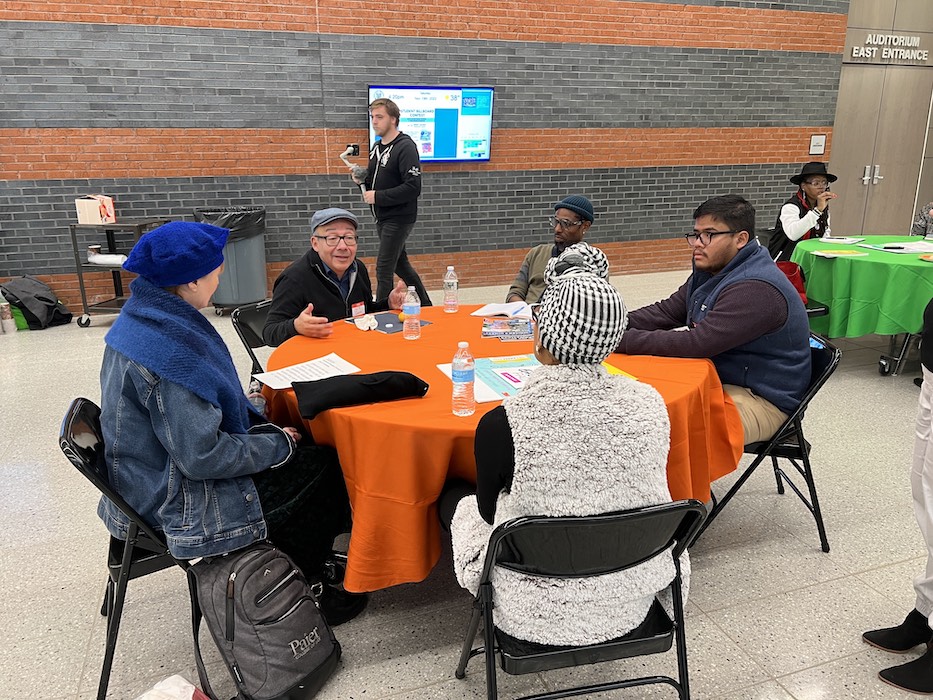 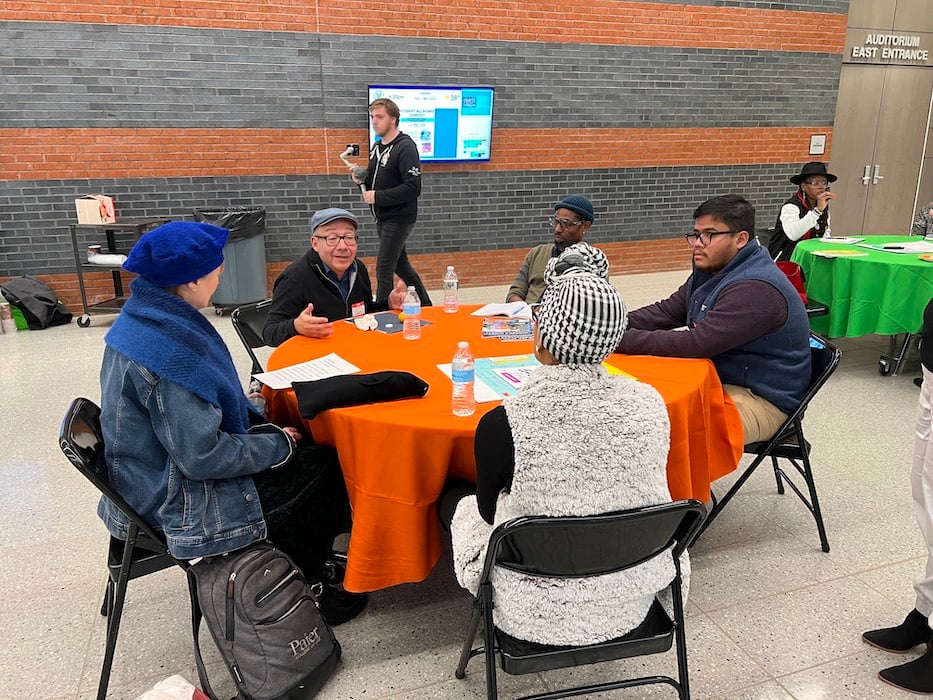 Breakout sessions from each of the panelists were also part of the afternoon. Here. poets José B. González and Frederick-Douglass Knowles II talk to attendees. Asher Duke Photos.

Together, they were five poets, ready to share the journey to their craft with eager listeners.

That was the scene Saturday, as poets José B. González, Joan Kwon Glass, Natasha Gambrell, Frederick-Douglass Knowles II, and Antoinette Brim-Bell came together for “Poets Are Not A Luxury,” an afternoon of poetry, conversation, and bookjoy at West Haven High School. In a panel discussion that became a highlight of the day, all five poets discussed the initial catalysts that got them into writing, and how their careers have transformed since.

The event, the title of which comes from Audre Lorde’s 1985 essay “Poetry Is Not A Luxury,” was organized by ArtsWest CT and received support from Connecticut Humanities, the Arts Council of Greater New Haven, and the Sustainable CT Community Matching Fund. Accompanying pop-ups and breakout sessions from Possible Futures, Elm City LIT Fest and Hartford's LIT meant that books flowed throughout the event.

From the beginning of the panel through the end, poets returned to what got them writing—and what has kept them in their craft. Kicking things off, Knowles said that writing helps connect him “with my maker”—his sense of the divine—and that “the gift that has been bestowed upon me from her is what it is, and I stand by that." Since starting to write decades ago, he has become an educator, passing that craft on to another generation. 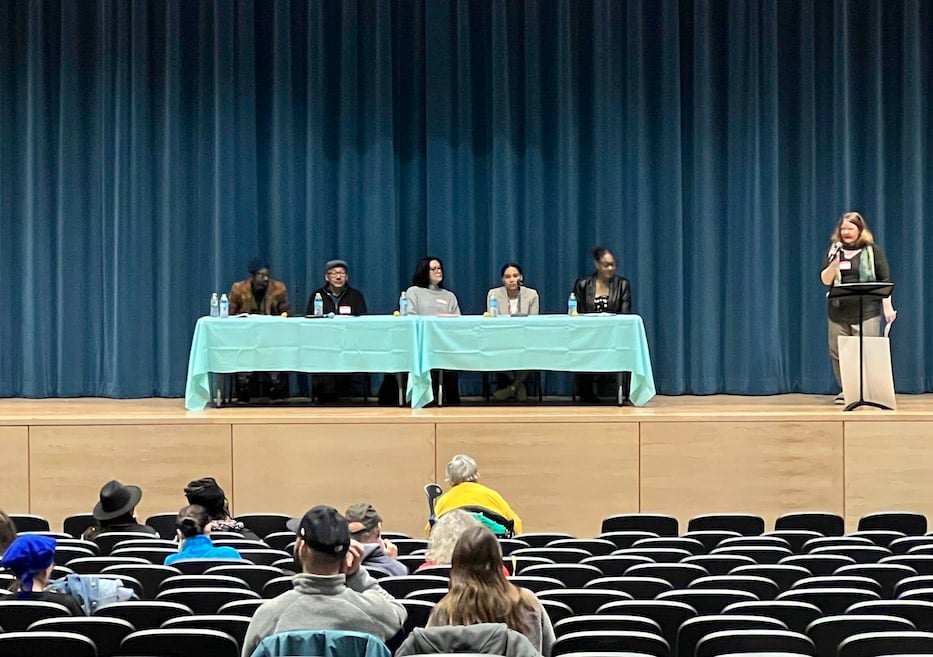 A professor of English at the Three Rivers Community College, Knowles explored the format of poetry and the experimentation of its many different forms. He cracked jokes about the complexities of sonnets and haikus and discussed the growing pains that came with trying new forms. Before he finished, he reminded members of the audience that they must break the barriers of academia if they want to truly explore poetry.

He has done so himself many times: his work is extremely lyrical, and also heavily influenced by contemporary music, popular culture, and how the legacy of white supremacy shows up in everyday life.

Glass, a middle school teacher who is also editor in chief of the online magazine Harbor Review and poet laureate of Milford, spoke on her writer's block—and how the music of Amy Winehouse was an inspiration. Years ago, she ran into a mental block while trying to write. She found that Winehouse’s voice—one that has carried stories of addiction and substance use disorder that Glass could understand intimately—was instrumental in getting her thoughts flowing. To her, the lyrics and melodies seemed to flow from the speaker onto her pen.

The music allowed her to overcome her own inhibitions, she said. It has also helped her get through that writer’s block: her collection Night Swim, dedicated to poems about mental health and suicidality, was published in March of this year. The book takes space to mourn the loss of her nephew Frankie and sister Julia to suicide in 2017. Glass didn't start writing it until a year later, unable to find the right words until a period of time had passed.

Some of the panel agreed, and others discussed the importance of silence while writing, preferring to sit within their own thoughts. 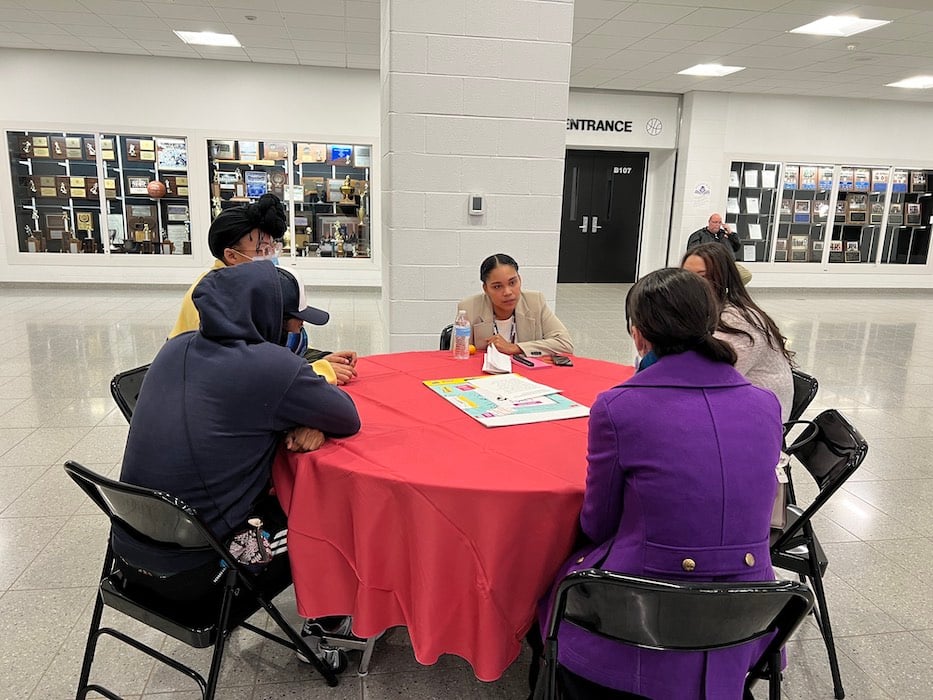 Gambrell spoke in great detail about how her experience as a member of the Eastern Pequot Tribal Nation shaped her methodology when writing poetry. She told attendees that she felt she had experienced genocide firsthand—from systems that have consistently failed Indigenous people, and centuries of anti-Indigenous policymaking in a country built on stolen land. For her, these include healthcare, inadequate education, and the frequent erasure of both Indigenous children and elders from history.

“Seeing those kinds of things as a kid makes it feel like you don’t exist, and having the power to demand recognition shapes how I write,” she said.

A lifelong activist and advocate for her tribe, she added that her poetry has become a catalyst for community change.

“I give us a voice,” she said. “A lot of us are suffering in silence, and giving us the ability to speak has been big for our movement. It's important to give the nameless a name and the voiceless a voice. It's something that I've struggled with for a long time, feeling that I don't have a voice, especially being an Indigenous person in Connecticut. Acknowledging that and realizing my truths allowed me to find mine."

As an educator, Gambrell also pointed to the way poetry can help young people write through the trauma they are experiencing and share their own feelings with a wider audience. While her work acknowledges the vast trauma Indigenous people have experienced, she said that her focus is on uplifting and inspiring her people to rise to the occasion.

"The kids say I helped give them an outlet,” she said. “A lot of us have been suffering in silence, and a lot of times, it's up to us to carry the nation on our backs."

From Gambrell’s exploration of genocide to Glass’ time with her own profound grief, there was no shortage of topics for the poets to discuss. Each agreed that poetry is inherently freeing and a lifeblood to their communities. For each loss the poets felt, there was comfort in writing about their experiences. 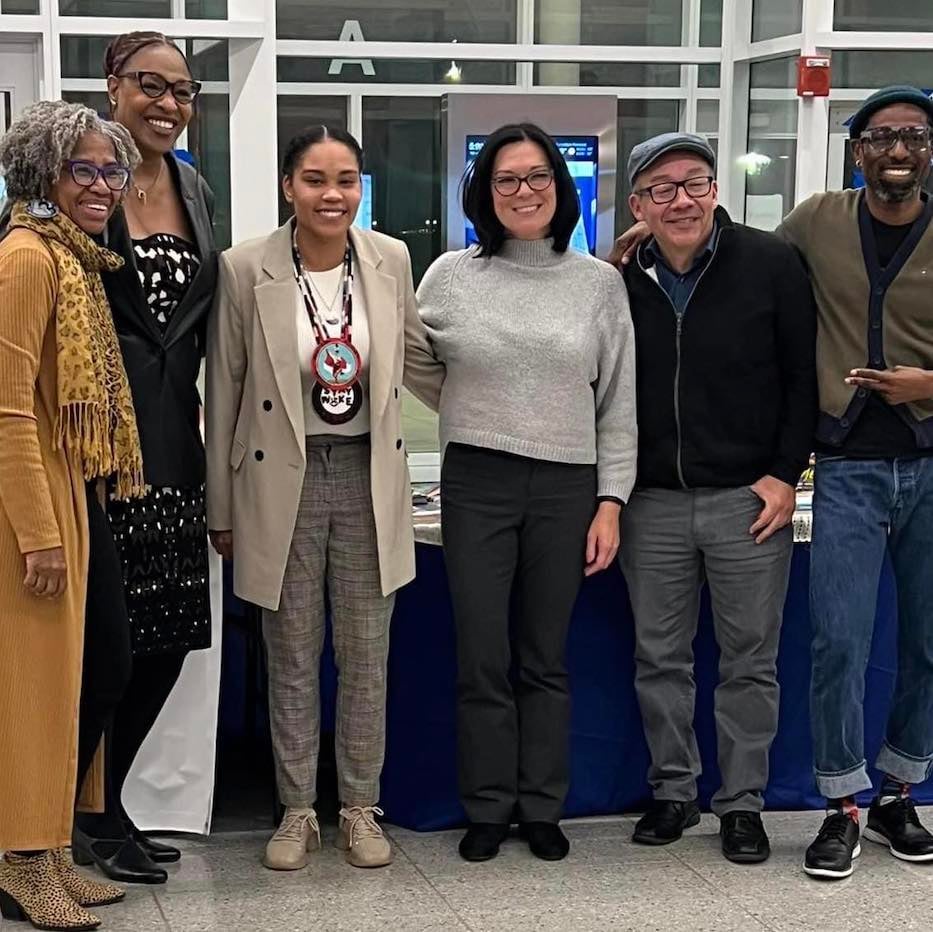 González, who is also an educator, told attendees that he once debated including personal details about his life in his collections. Born in El Salvador, the poet immigrated to the U.S. when he was just an eight-year-old kid, and settled with his family in New London, Conn. He went on to study English and poetry, so curious about the written word that he pursued a doctorate before turning around to teach.

He told the audience about his childhood, of growing up with the knowledge of his war-torn country and the murders he was privy to. He needed to discover if he would be hardened by it, or if he would learn and grow. It became the foundation of his collection Toys Made of Rocks.

“long before i got hurt playing with my first english word, i used rocks as toys and juggled them back and forth, even the jagged ones that carved into my palms felt like cotton comforting my calluses, and even when i missed & they c-r-a-c-k-e-d into millions of pieces i’d still feel like they belonged tom, like they were natural parts of my uun-bro-ken spa-nish life,” he writes in the book.

When asked to present Saturday, he said he wasn’t originally sure whether to include a poem about his background and his father's struggle with alcoholism. That kind of subject was taboo for him as a kid. Then he considered the breadth of his audience—including people who had experience with substance use disorder.

“Then I thought, if I include it, and if there's a chance of this young person, whether that be someone in high school or middle school or college or even after, whose world they think is ending, if they could read this poem and then get some inspiration out of it and realize that it's not the end of the world and that sometimes this is a problem that affects not just one person, but so many of us, then maybe I should include it," he said.

Brim-Bell, who is currently serving as Connecticut’s eighth state poet laureate, listened thoughtfully as each poet spoke on their reasons for getting into writing. For her, “I think it was just my way of relieving myself of the concern of life,” she said. In particular, her sometimes tenuous relationship with her family was one of them. As of this year, she has written three books of poetry, including These Women You Gave Me, Icarus In Love and Psalm of the Sunflower.

In her eyes, poetry is a "vital necessity for our existence," because it contains that truth-telling power, she said. Her 2009 collection Psalm of the Sunflower goes deep on her divorce, and how it helped her discover who she is (read more about that in a previous Arts Paper article here). Through her realizations, sometimes heartbreaking, Brim-Bell has honed her craft. She urged collaboration over competition, drawing resounding applause from the audience.

“When I go to the page, I want to make sure that I’m not going to be unkind, or indict someone or to call out someone,” she said. “I want to make sure I’m not like that, and I want to become the reader, or the critic who understands and enjoys. I write to be the careful reader.”

After the panel, an attendee said she had found the discussion moving for its rooted-ness in real-life problems and struggles that the poets are facing.

"I thought this was very pleasant. It had a nice tone to it, and I liked that I got a little glimpse into the poet's minds and how they create their work. The real-life events that they used to create their poems were very powerful.”

Learn more about ArtsWest CT here and here. This article is part of a new collaboration between the Arts Paper and students at the University of New Haven (UNH). Asher Duke is a junior at UNH.