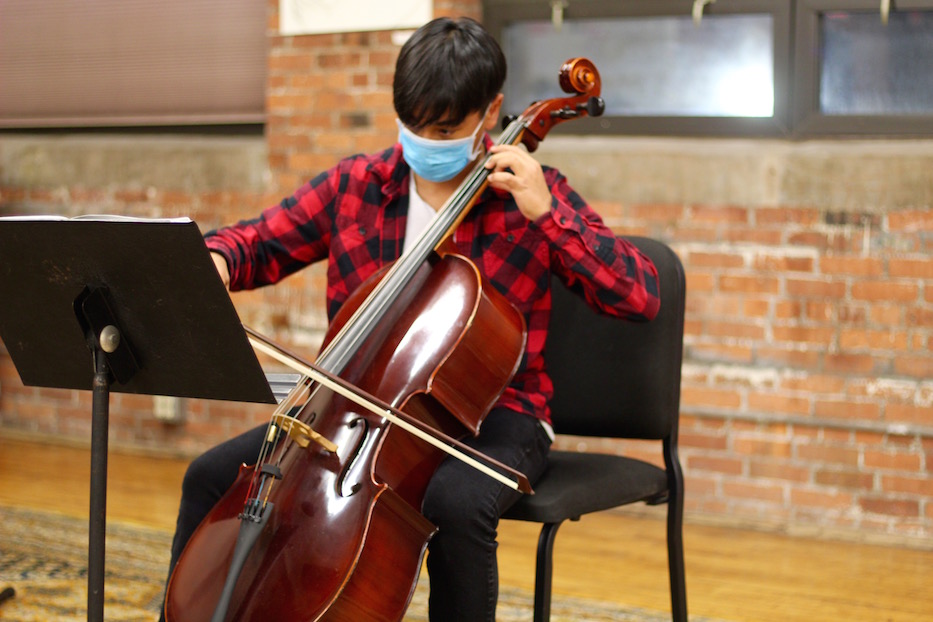 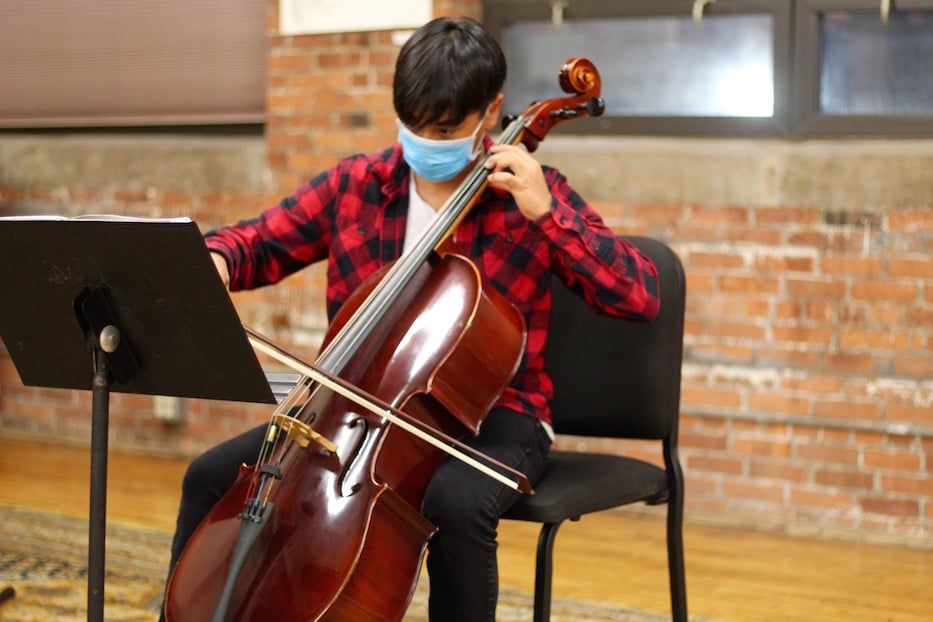 Mathais-Li Nuñez had just started the final measures of Antonio Vivaldi’s Sonata in E Minor when he paused, took a breath, and studied the sheet music before him. In the small Erector Square audience, no one made a sound. He looked down, looked back at the music, and tweaked the placement of his bow against the strings. His teacher, sitting just to his right, paused with him.

The whole process took only seconds. The two exchanged a glance, then a full-bellied sound filled the studio once more, floating from his cello towards the rafters. If a listener closed their eyes, they could see two birds taking flight.

Mathias is a student at Music Haven, the Elm City nonprofit teaching tuition-free string music lessons to over 80 students from low- and middle-income backgrounds across the city. Wednesday evening, he joined fellow cellists in an intimate recital that gave young musicians time to pause, take stock of the task before them, and emerge triumphant. 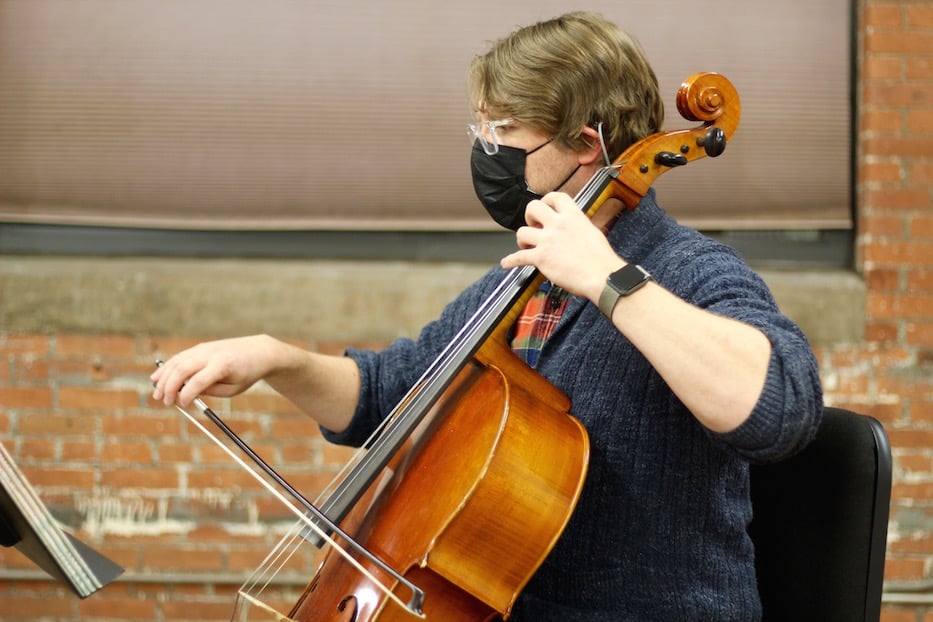 Cellist Philip Boulanger, who is a member of the resident Haven String Quartet and a cello teacher at the nonprofit.

It is one of the first times musicians have been able to perform in the Peck Street space since March 2020. Students, staff, and visitors over 12 must be vaccinated to come in-person; the organization is requiring students five and up to be vaccinated starting in January. Wednesday, materials on the CDC’s new vaccine guidelines for 5-11 year olds sat out in English and Spanish.

“It’s amazing [to be back],” said Philip Boulanger, a member of the Haven String Quartet who is a resident musician and cello teacher at the organization. “It feels like we spent a long time waiting for these moments, and you no longer take the little things for granted.”

There are parts of in-person teaching that Boulanger didn’t know to miss until they were gone, he said Wednesday. He now savors the chance to play a simple warm-up scale in time with his students without the fear of someone’s audio glitching. He’s able to reach over and fix the way a bow rests in a hand; he can repair a snapped string without coordinating a contact-free handoff somewhere across the city.

Students feel it too. Wednesday they glided onto the floor, took great relish in their pre- and post-recital bows, and smized behind their masks at cacophonous cheers and applause. In the audience, friends and families filled several rows, creating a buzzing full house before the show. 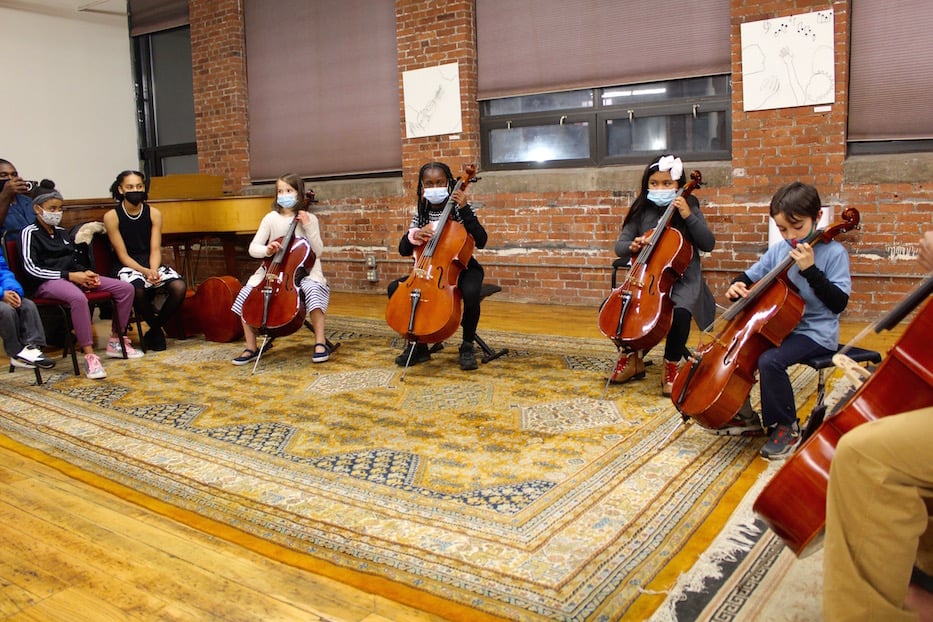 A rhapsodic "Twinkle Twinkle" from Kate Stewart, Nike Dyer, Madeline Rodriguez and Mateo Cruz. Older student Max Jackson (out of the frame) assists Boulanger with the beginner class each week.

From the moment Boulanger’s beginner class walked onto the floor, an excitement crackled in the air. After a squeakily rhapsodic take on “Twinkle Twinkle Little Star," students launched into a new game of musical “catch” that they have been able to play together. The game asks young cellists to be nimble and pick up a given piece where their classmates stop.

After Kate Stewart and Nike Dyer began a second iteration of “Twinkle Twinkle,” they looked up and made a split-second decision.

“Catch … Mateo!” they cried. At the right hand side of the group, Mateo Cruz took up the next part of the tune. The notes drifted slowly, carefully through the air. He became methodical, taking his time to finish one bar, and then pass it on. He gave his dad a thumbs-up as he finished, his eyes dancing behind a rainbow-patterned mask.

That permission—to take time to get something right—also flowed through performances like Nuñez’s, as well as those of his classmates. As Nuñez played slowly, the notes filled the room, blanketing the floor in that heavy, full way that only a cello can. A minute or so in, he stopped, readjusted, and returned to the music. This time, he was more sure of it than he had been before: the cello seemed muscled, strong as it soared. When he reached the end, his family members cheered from the audience.

It gave the bright, sprawling studio space, adorned with a well-loved rug and wire sculptures of students playing music, a sense of being a home away from home. Students slipped into seats with their families, some nestled in their parents’ laps and waiting arms. They leaned in to listen intently as their classmates played. Between performances, someone’s younger sibling got wrapped up in the applause and yelled “Cheeeeese!” from the back row. Gentle laughter rippled through the space.

Carolyne Muñoz Herrera, a six-year veteran of Music Haven and freshman at Amistad Achievement First Amistad High School, said that the organization has helped her stay focused and even-keeled in the last year and a half. When schools went remote in March 2020, she turned to her cello lessons for a sense of stability. She didn’t step back into a school building until this September.

“I feel like I learned more, I practiced more,” she said of the past year. When she couldn’t see her friends or attend classes in person, her cello “kind of distracted me from what was happening.” 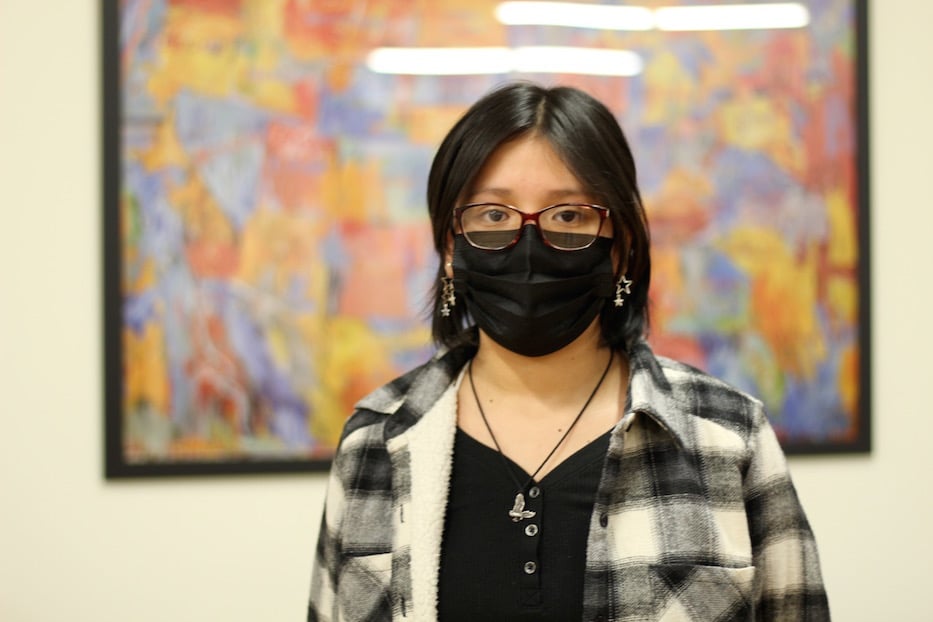 Carolyne Muñoz Herrera, now a freshman at Amistad Achievement First Amistad High School. The cello “kind of distracted me from what was happening” during the pandemic, she said Wednesday.

As she sat down to play William Squire’s “Dance Rustique,” those hours of practice waited for her between each quick, crisp note. Written in 1897, the piece bounces just like the rustic dance it describes. It is ebullient and chipper, conjuring what feels like the soundtrack to a crowded Pieter Breugel painting. Playing early in the evening, she adjusted the cello, and straightened both her back and her bow. The last strains of a flawless minuet from Maelle Davenport (in video above) still hung in the air.

When she began to play, the notes bobbed up and down, as if on a musical seesaw. Boulanger’s cello hummed steadily beneath hers. The minuet faded, replaced by Squire’s steady footfalls. In the audience, a few listeners swayed back and forth.

In a short interview after the performance, she said she’s happy to be back in the space, and rehearsing in-person after over a year playing to a screen in her home. Around her, the Peck Street studio emptied out almost as quickly as it had filled up, kids and families chattering into the warm November night. She packed up her cello and music book as she spoke.

“I feel like I’ve learned to be more friendly at Music Haven,” she said. “I like how everyone has the opportunity to play.”