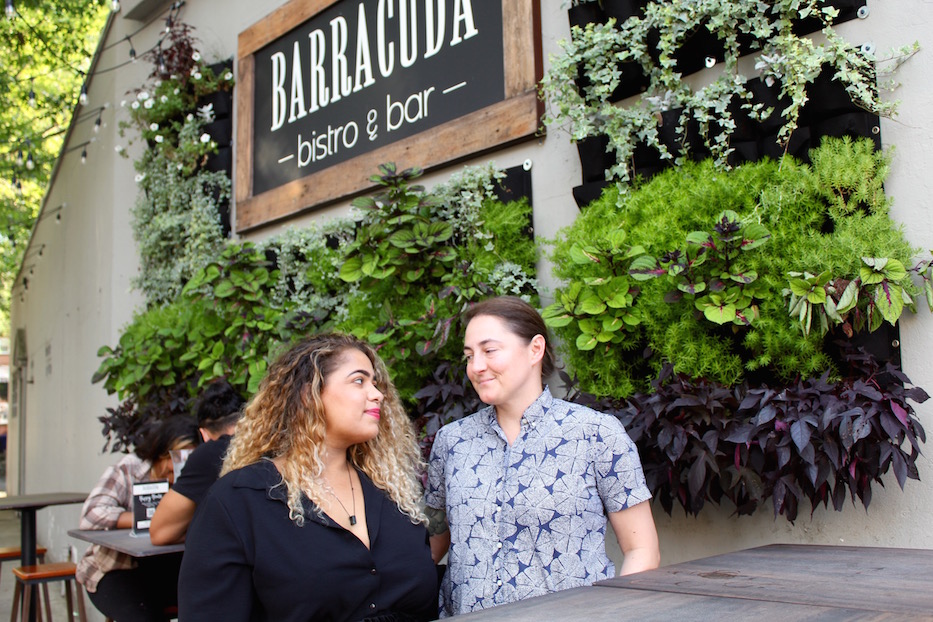 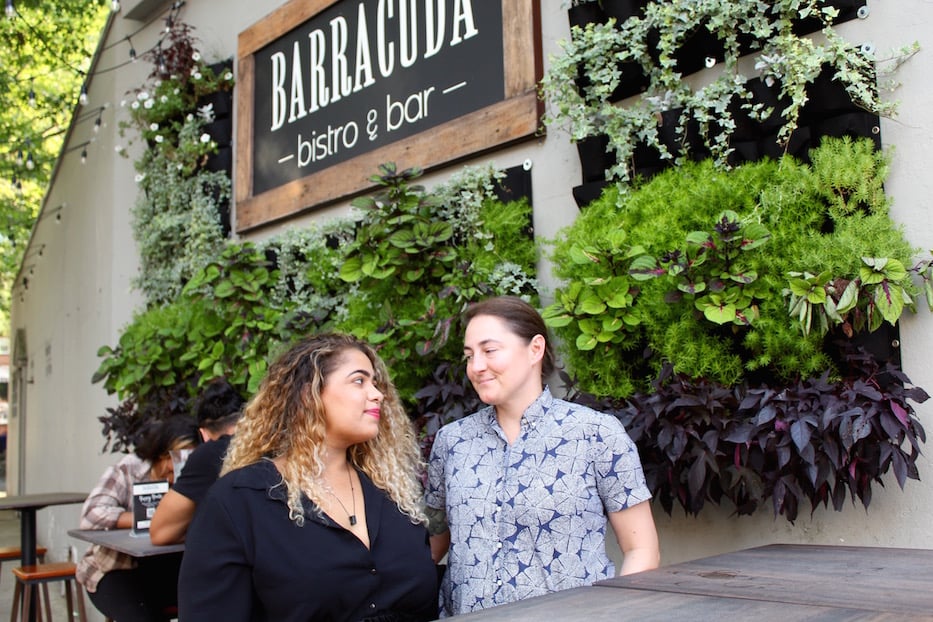 Your Queer Plant Shop Co-Founders Anika Stewart and Georgina Gross, who are partners in both life and work. Lucy Gellman Photos.

The Coleus are visible from across the street, blooming in deep greens and oxblood reds that melt right into each other. Silver ivy and seaweed-colored sedum drip over the sides, as if they are escaping from their soft containers in slow motion. Sweet potato vines chat lovingly with the creamy petunias far above their heads.

The installation is the biophilic brainchild of Anika Stewart and Georgina Gross, partners and plant nerds who founded Your Queer Plant Shop (YQPS) during the pandemic. This summer, the two have brought their work to Barracuda Bistro & Bar as part of their mission to give back to the greater New Haven community and highlight queer, trans, and Black and Brown voices. The business is currently raising money for the Marsha P. Johnson Foundation.

“The community is everything to us,” said Stewart, standing at a table outside Barracuda on Monday night. “We would not be here without the support of people who have been reaching out since day one."

The shop—which donates a portion of its proceeds to social justice nonprofits— was born last year, as Covid-19 hit Connecticut and businesses shut down one by one. Stewart, an artist who works as the manager at Rimage Salon & Spa, was suddenly out of work for months. Gross, who is a clinical psychologist at the West Haven VA Hospital, had to do a hard pivot to keep providing care.

A post shared by Georgina (they) & Anika (she) (@yourqueerplantshop)

Both were already propagating tropical plants in their small West Haven apartments. After a “spiritual awakening” several years ago, Stewart started thinking about the way plants, like humans, were constantly breathing and moving around her. She began growing them at home, where they have since overtaken a second bedroom that also houses her studio and her two cats.

Born and raised in Baltimore, Gross grew up watching their dad spend hours tending to Bonsai trees, the tiny, pruned wonders that are famously fickle. They saw how it gave him “a source of peace,” they said. As an adult, they gravitated towards plants for their permanence. Flowers wilted and died after a few days. Plants could keep their apartment lush and green all year.

Early into the pandemic, “G told me their dream in life was to own a plant shop,” Stewart recalled. They started brainstorming with the resources they had: indoor space, a drive for social justice, and a blossoming obsession with tropical plants.

The shop started small, with dozens of plants in their apartments that soon became hundreds. Stewart and Gross have a particular focus on tropical plants, from fishbone cacti to green and yellow Hoya Carnosa (more commonly called a Honeyplant), because they grow indoors and flourish year-round under the right conditions. They started thinking about how and where they wanted to sell plants, aware of the twin pandemics of Covid-19 and racism that were unfolding around them.

When Connecticut businesses began a phased reopening last June, Stewart’s boss at Rimage offered the salon’s outdoor parking lot as a pop-up venue. Initially, Gross “was nervous about opening in a pandemic,” they said—it was new territory after months spent coaxing plants, talking to people through Instagram and gushing over velveteen leaves in their apartment greenhouses. Then customers started arriving.

The shop sold out within hours. Gross and Stewart able to donate to The Loveland Foundation, which covers the costs of therapy for Black women and girls. From an Instagram page, they grew the shop into a website, and kept planning pop-ups around the city. In the spring, they donated $600 from sales to a fundraiser for the Asian American and Pacific Islander (AAPI) community. They most recently held one in the parking lot of Rimage, which raised money for the Marsha P. Johnson Foundation. Stewart said the intention is to choose a new organization every month or so.

A post shared by Georgina (they) & Anika (she) (@yourqueerplantshop)

The business has also been restorative for them: it’s a way to practice community care that has nothing to do with their jobs. Stewart loves the attention to detail that goes into nurturing plants, she said. As a clinical psychologist, Gross specializes in trauma and Post-traumatic stress disorder (PTSD), particularly in women and LGBTQ+ veterans. Tending to their plants doubles as a way to de-stress.

“I feel like plants in a lot of ways get me out of my head and into my life,” they said.

The business has continued to grow for over a year. In April, Barracuda owner Sonia Salazar messaged the duo, asking for an outdoor installation at the restaurant. The building sits snugly at the corner of Chapel and Park Streets, and had a big blank wall that Salazar wanted to fill. Gross, who uses hanging shoe holders to maximize space at home, found heavy duty vertical garden equipment online. The two began sketching out their first large-scale work.

Stewart envisioned a botanical sort of ombre fade, with colors that rippled over each other. She also knew that the Park Street wall would only sustain plants that could thrive in full sun. She praised Becky Goetsch, site manager at Running Brook Farms and the owner of Running Brook Hemp Co., for providing YQPS with over 200 plants for the piece. 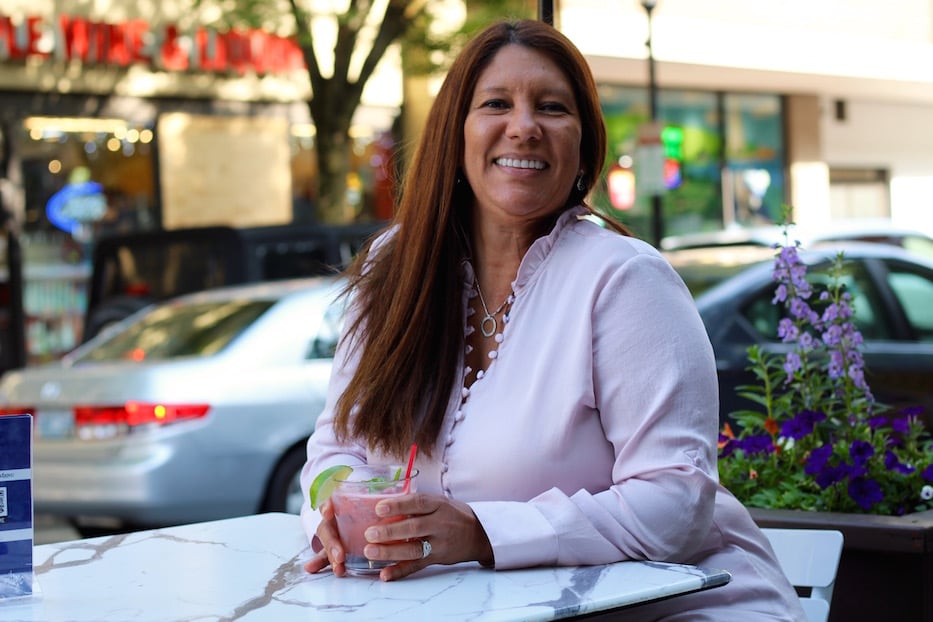 Since the two first installed the piece in early June, Stewart has made a habit of returning to water it three times per week. The two have also replaced a few of the plants on an as-needed basis. As a queer, immigrant and Latinx business owner in New Haven, Salazar said she is thrilled to have it at Barracuda. Part of her mission, she said, is to support other small women- and queer-owned businesses in the city whenever she can.

“I always wanted to have the greatest garden,” she said in a phone call Wednesday. “They did a great job. Everybody loves it. In this business, we meet a lot of great people. They are part of Barracuda.”

The restaurant is also special to Stewart and Gross because it’s where their love story began. The two went on their first date in 2019 at Salazar’s Temple Street restaurant Te Amo Tequila, because “we know it’s a safe space” for queer people, Stewart said. Barracuda, which tends to be quieter and more intimate, has since become their spot. In addition to the wall hanging on Park Street, they designed the planters outside of Te Amo earlier this year, where a cluster of open air tables is almost always full.

“It’s like it’s fulfilling, but fulfilling doesn’t really describe it,” Stewart said. “Recently, I’ve just been feeling this fire in my soul.” 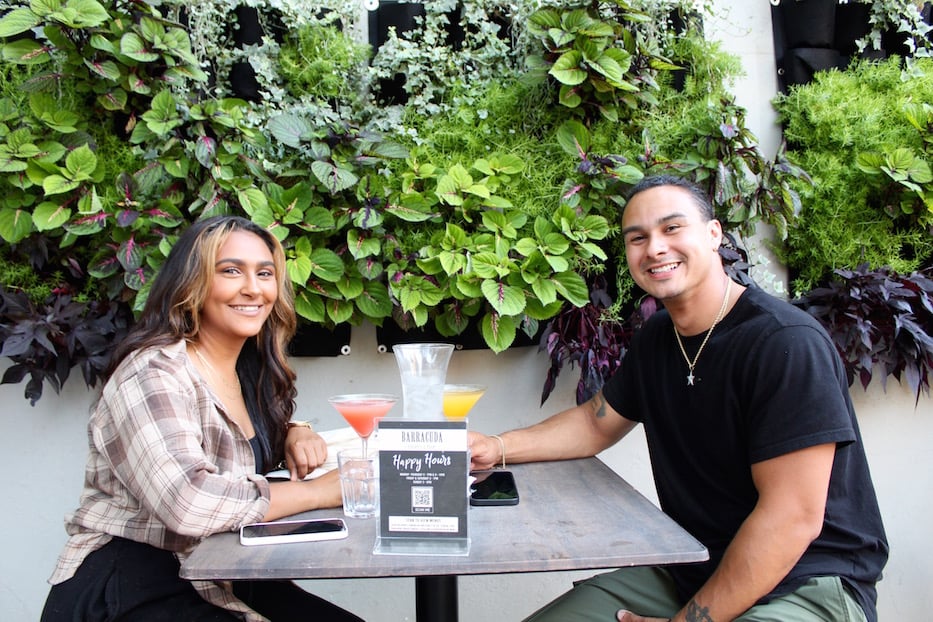 Monday, Meriden residents Taira Cominsky and Tim Velez marveled at the installation as they celebrated their third wedding anniversary with Barracuda’s cocktails and Colombian food. During the pandemic, Cominsky founded Modern Mama Baby Goods, a sustainable line of baby products in honor of their two small daughters, London Rain and Rowan Capri.

As a breeze floated over Chapel Street, they sipped mango and grapefruit martinis on a rare night out on the town. As a small business owner and plant lover herself, Cominsky said she appreciates the amount of labor that must go into YQPS.

She added that she was especially excited about it after realizing that the flowers and plants were alive. Often, she said, restaurants are filled with synthetic plants, with a fabric or plastic sheen that gets old quickly. She was delighted when these gave off the smell of sweet earth.

“This is actually why we sat outside,” Velez said, motioning to the wall hanging. “We’re big plant people.”

Find out more about Your Queer Plant Shop at their Instagram.